At present, fixed point theory is an immensely active area of research due to its applications in multiple fields. It addresses the results which state that, under certain conditions, a self map on a set admits a fixed point. Among all the results in fixed point theory, the “Banach Contraction Principle” in metric fixed point theory is the most celebrated one due to its simplicity and ease of application in major areas of mathematics. Following the Banach Contraction Principle, Boyd and Wong [1] investigated the fixed point results in nonlinear contraction mappings. Subsequently, many authors extended and generalized this fixed point theorem in different directions.
Study of fixed point results in partially ordered sets has been a very well motivated research area because of its ease of compatibility in modelling various problems and in finding new convergence schemes. The first attempt in this direction was carried out by Ran and Reurings [2] who combined the Banach contraction principle and the Knaster–Tarski fixed point theorem. Ran and Reurings considered a class of mappings , with as a complete metric space and a partial order ≤. The mappings they considered were continuous and monotone with respect to the partial order ≤. Those mappings also satisfy a Banach contraction inequality for every pair such that . When for some , the inequality is satisfied, they proved that the Picard sequence would converge to a fixed point of f. Ran and Reurings also combined this interesting result with the Schauder fixed point theorem and applied it to obtain some existence and uniqueness results to nonlinear matrix equations.
Neito and Rodríguez-López ([3,4]) extended the results of Ran and Reurings to the functions which were not necessarily continuous. The authors also applied their results to obtain a theorem on the existence of a unique solution for periodic boundary problems relative to ordinary differential equations.
Some very important works in this direction that deserve attention are [5,6,7,8,9,10,11,12,13,14,15,16,17,18].
Nadler [19] and Assad and Kirk [20] established some very important fixed point results for set valued and multivalued contraction mappings. Meanwhile, Espinola and Kirk [21] combined the concepts of fixed point theory and graph theory to prove some interesting fixed point theorems in R-trees. In 2008, Jachymski [22] introduced an interesting idea of using the language of graph theory in the study of fixed point results. He was interested in establishing results that would eventually generalize the existing results and also in applying the results to the theory of linear operators. So, he studied the class of generalized Banach contractions on a metric space with a directed graph. The advantage of using graph theoretical concepts was that it helped him to describe the results in a unified way and also weaken some conditions significantly. Such works were further extended by Bojor [23,24] in a significant way.
Very recently, some fixed point results on subgraphs of directed graphs were established by Aleomraninejad, Rezapour and Shahzad [6,25]. They showed that the Caristi fixed point theorem and a version of the Knaster–Tarski fixed point theorem are special cases of their results. Inspired by their work, in the present paper, we prove some fixed point theorems in the case of set valued mappings in the setting of a metric space with a graph by defining a new notion called start point of a directed graph.
Let be a complete metric space and be the class of all nonempty closed and bounded subsets of X. For , let: where . Then is a metric space and D is said to be a Hausdorff metric induced by d.
Let be a metric space and denote the diagonal of the Cartesian product . Consider a directed graph G such that the set of its vertices coincides with X (i.e., ) and the set of its edges is such that , i.e., G contains all the loops. We assume G has no parallel edges and thus we identify G with the pair .
If , then a path in G from x to y is a sequence of vertices such that , and for .
In this article, we assume that a path may be finite or infinite and a cycle may be considered as a finite path. Also, we assume that G has no isolated vertex.

In this article, the new concept of start point in a directed graph has been introduced and some fixed point theorems for set valued mappings have been established with the help of start point in the setting of a metric space endowed with a directed graph. A version of the Knaster–Tarski fixed point theorem has also been established. Our results unify and extend some existing results in literature. The results discussed in this paper are mainly concerned with the existence of fixed points. The study of the uniqueness of fixed points in the current context would be an interesting topic for future study. 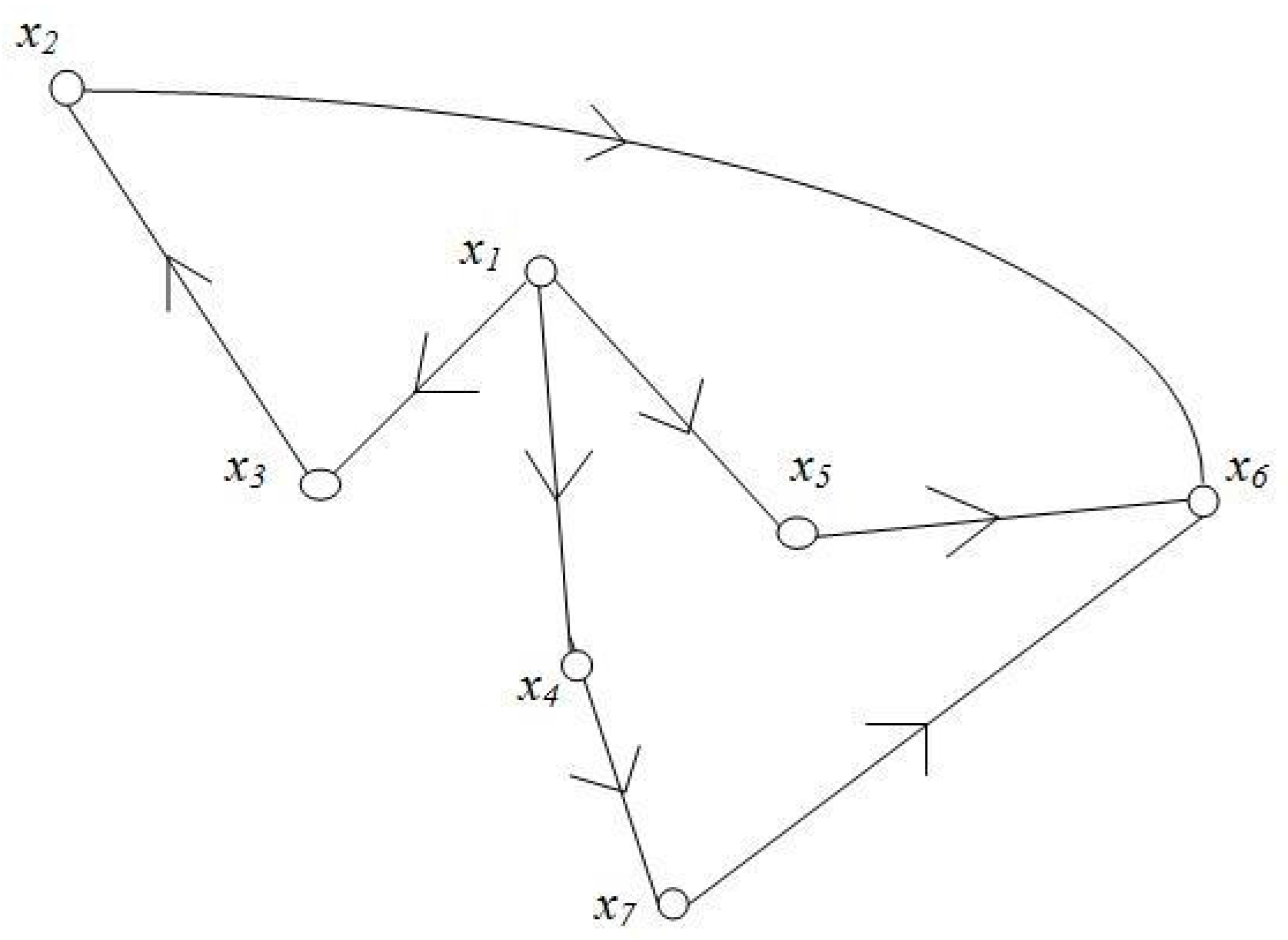