Acute myeloid leukemia (AML) is a heterogeneous disease, and communication between leukemic cells and their neighboring leukemia-supporting normal cells is involved in leukemogenesis. The bone marrow cytokine network is therefore important, and the mediator release profile seems more important than single mediators. It is not known whether the characterization of primary AML cell proteomes reflects the heterogeneity of the broad and dynamic constitutive mediator release profile by these cells. To address this, we compared the intracellular levels of 41 proteins in 19 AML patients with the constitutive extracellular release during in vitro culture, including chemokines, growth factors, proteases, and protease regulators. The constitutive release of most mediators showed a wide variation (up to 2000-fold differences) between patients. Detectable intracellular levels were seen for 10 of 41 mediators, but for most of these 10 mediators we could not detect significant correlations between the constitutive release during in vitro culture and their intracellular levels. Intracellular protein levels in primary human AML cells do not reflect the dynamics, capacity, and variation between patients in constitutive mediator release profiles. Measurements of these profiles thus add complementary information to proteomic detection/quantification regarding the heterogeneity of the AML cell contributions to the bone marrow cytokine network.
Keywords: acute myeloid leukemia; cytokine; protease; constitutive secretion; proteomics acute myeloid leukemia; cytokine; protease; constitutive secretion; proteomics

Acute myeloid leukemia (AML) is an aggressive malignancy characterized by the infiltration of immature leukemia blasts in the bone marrow [1]. Several nonleukemic bone marrow cells support the development of the disease, including the various cells of the stem cell niches that support the maintenance of the most immature leukemic stem cells [2,3]. The bidirectional crosstalk between leukemic and non-leukemic cells is mediated both by direct cell–cell contact and through the release of soluble mediators into their common bone marrow microenvironment [4,5,6]. The constitutive release (here defined as mediators secreted without specific stimuli) of a wide range of soluble mediators by the primary human AML cells is thought to be an important part of this crosstalk. This release is also important for autocrine loops and, thereby, the spontaneous proliferation of AML cells, and the ability of autocrine proliferation is also associated with the prognosis [7].
AML is a very heterogeneous disease [1], and proteomic investigations can be used to further characterize this heterogeneity [8,9,10,11]. A wide variation in the constitutive release of several soluble mediators is a part of this patient heterogeneity [12,13]. Previous studies of this release have been based on the detection of extracellular mediator levels after in vitro culture of enriched AML cells under highly standardized conditions, i.e., evaluation of mediator release in a dynamic model, and the differences between patients in this assay are even associated with prognosis. However, this possible prognostic impact needs to be further investigated, but biological characteristics detected during in vitro culture are not suitable for implementation in clinical studies or routine clinical practice. For these reasons, we have investigated whether an analysis of intracellular mediator levels, i.e., the snapshot of intracellular proteins at the time of sample collection, reflects the dynamic process of constitutive mediator release from these cells. We then compared the proteomic quantitation of cellular soluble mediators in enriched primary AML cells with the constitutive extracellular mediator release during standardized in vitro culture of the leukemic cells.

The study was approved by the local Ethics Committee (Regional Ethics Committee III, University of Bergen; REK 2013/634), and samples were collected after written informed consent. AML blasts were derived from 19 unselected patients admitted to our hospital for treatment of acute myeloid leukemia (7 females and 12 males; median age 52 years with range 18–68 years). The present study included all patients from a defined geographical area and during a defined time period who were below 70 years of age, had circulating AML blasts in the peripheral blood, and were regarded to be fit for intensive (i.e., potentially curative) antileukemic treatment. The patient characteristics are summarized in Table 1. A major part of the patients had de novo AML with normal karyotype. Primary AML cells were isolated from peripheral blood by density gradient separation (Lymphoprep; Axis-Shield, Oslo, Norway; specific density 1.077 g/mL). All patients showed high levels (>20 × 109/L) and/or percentage (>80%) of circulating AML blasts, and a highly enriched blast population could thereby be prepared by density gradient separation alone [14,15,16]. The prepared leukemic cell populations contained at least 90% blasts and the cells were stored in liquid nitrogen until used.

2.2. Protein Analyses and In Vitro Culture

Primary AML cells from all 19 patients were thawed and immediately processed for proteomic analysis/quantification according to the sample preparation protocol previously described in detail [8,11]. Briefly, the cells were lysed in 4% SDS/0.1M Tris-HCl pH 7.6, and 20 µg protein samples were prepared according to the filter-aided sample preparation protocol [17]. For proteomic analysis, approximately 1 µg per sample, dissolved in 2% acetonitrile (ACN) and 1% formic acid (FA), was injected into an Ultimate 3000 Rapid Separation LC system (Thermo Scientific, Sunnyvale, California, CA, USA) coupled to a QExactive HF mass spectrometer (MS) (Thermo Scientific, Bremen, Germany) equipped with an EASY-spray ion source (Thermo Scientific). The peptides were pre-concentrated on a precolumn (Acclaim PepMap100, 2 cm × 75 µm I.D. nanoViper column, packed with 3 µm C18 beads with pore size 100Å), and separated on a 50 cm-long analytical column (Acclaim PepMap RSLC, 50 cm × 75 µm I.D. EASY-spray column, packed with 2 µm C18 beads with pore size 100Å) at a flow rate of 200 nL/min. The peptides were eluted by a binary gradient of solvent A (0.1% FA) and solvent B (0.1% FA/ACN) with the following 195 min gradient composition: 5% B during trapping from 0 to 5 min followed by increase to 8% B from 5 to 5.5 min, then to 24% B from 5.5 to 115 min, to 35% B from 115 to 140 min, and to 90% B from 140 to 155 min. Hold at 90% B for 15 min and ramped to 5% B from 170 to 195 min.
The QExactive HF was operated in data-dependent acquisition (DDA) mode, thus switching between survey full scan MS and MS/MS acquisition. The full scans (from m/z 375–1500) were acquired in profile mode with a resolution of R = 120,000 at 200 m/z, an automatic gain control (AGC) target value of 3 × 106 and maximum injection time (IT) of 100 ms. The top 12 precursors (above the intensity threshold of 5 × 104 counts) were sequentially isolated for MS/MS. The scans were acquired in centroid mode with a resolution of R = 30,000, an AGC target value of 1 × 105 and a maximum IT of 110 ms. Normalized collision energy was set to 28%, the isolation window was 1.6 m/z (offset 0.3 m/z) and the dynamic exclusion lasted for 25 s. Furthermore, for spray and ion-source parameters, the ion spray voltage was at 1800 V, no sheath and auxiliary gas flow, and the capillary temperature was at 260 °C.
The raw MS files were searched in MaxQuant (v.1.5.6.0) [18] using default parameters, with the following exceptions: Gln conversion to pyro-Glu was included as a variable modification, trypsin was used for proteolytic digestion, peptide length was set to 6 amino acids, the match-between-runs option was enabled, and the minimum ratio count was set to 1 for label-free quantitation (LFQ) (i.e., the same peptide needs to be present in at least two samples for quantification). The cellular protein levels were relatively quantified using the MaxLFQ algorithm [19], and these intracellular levels are presented as the relative LFQ intensity defined as the normalized relative protein abundance compared across the MS runs.
Our in vitro model for investigation of constitutive mediator release has been previously described in detail [12,13,20]. Briefly, supernatants were collected from all patients’ AML cells after being cultured alone for 48 h in Stem Span SFEMTM medium (Stem Cell Technologies; Vancouver, BC, Canada) in 24-well culture plates (1 × 106 cells per mL; Nunclon, Roskilde, Denmark). The levels of 41 mediators were analyzed either by Luminex assays or ELISA analyses, as described previously [12,13,21]. The raw data of constitutive mediator release for the 19 patients of interest were extracted from our previous studies comprising 79 patients, in which 7 of the 19 patients were identified with low, 4 with intermediate, and 8 with high mediator release profiles [13].
Spearman’s test was used to assess the correlation between the intracellular and extracellular levels of the mediators (GraphPad Prism version 7.00, California, CA, USA).

Communication between malignant and nonmalignant neighboring cells through the cytokine network is important in AML. AML cells show constitutive release of a wide range of soluble mediators, and the overall release profile or combined effects of several mediators may then be more important than the effects of single mediators. Our study shows that for most mediators, the ability of constitutive extracellular release by primary human AML is best evaluated by in vitro culture, and not by analyzing intracellular levels as a static representation of the potential secretome. However, several soluble mediators demonstrate a wide variation between patients both intracellularly and when constitutively released, thus reflecting the large heterogeneity in AML. A combination of different methodological strategies may be essential to capture this heterogeneity and for a deeper understanding of leukemogenesis and AML cells’ communication with the microenvironment.

The following are available online https://www.mdpi.com/2227-7382/7/1/1/s1, Supplemental Table S1: Levels of constitutive cytokine release during in vitro culture by enriched primary human AML cells. For each mediator, we present the number of patients (n = 19 patient samples were included) with detectable levels, together with the median level (pg/mL) and the range for those patients showing detectable levels when measured with Luminex/ELISA assays. The mediators showing detectable levels in the proteomic examination are marked with an asterisk to the left in the figure. Supplemental Table S2: Proteomic LFQ results for the relevant proteins, and concentration of the constitutively released mediators.

This research received no external funding. The authors receive financial support from the Norwegian Cancer Society, the Western Norway Regional Health Authority and University of Bergen. 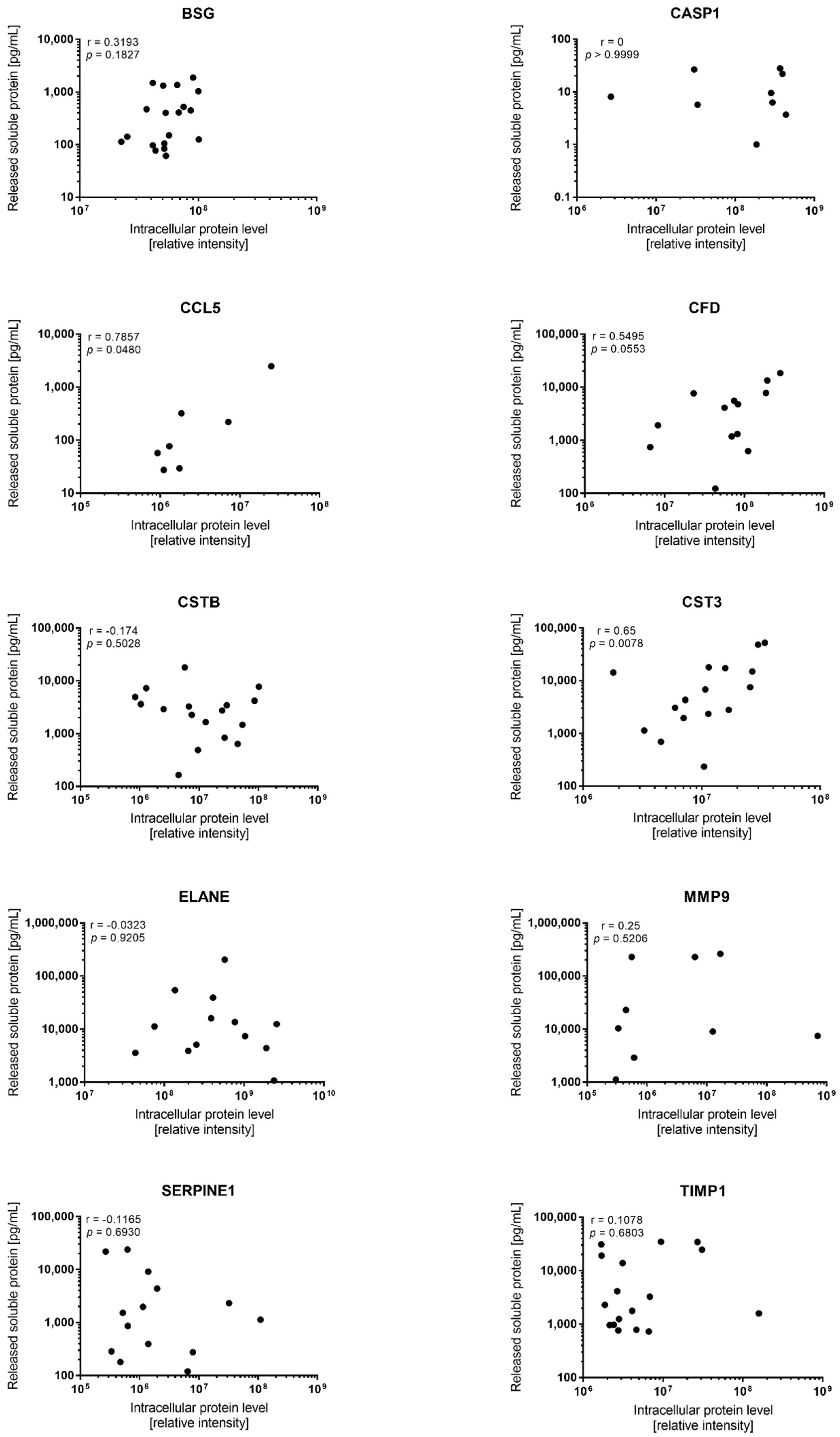