The Role of Clinical Proteomics, Lipidomics, and Genomics in the Diagnosis of Alzheimer’s Disease

In the world approximately 44 million people have been diagnosed with Alzheimer’s disease (AD) or related dementia. The global cost of AD and dementia has now been estimated to be approx. $605 billion and is equivalent to 1% of the world’s gross domestic product. In the United States AD rates by age classifications are: 85+ years, 38%, 75–84 years, 44%, 65–74 years, 15%, <65 years, 4%. The age group under 65 years has been diagnosed with approx. 4% of the AD cases and as of 2016 the susceptibility to AD may have originated early in life with chronic diseases such as obesity, diabetes, and neurodegenerative diseases closely associated with hypothalamic disturbances and neurodegenerative diseases. AD is a neurodegenerative condition that involves disturbances in multiple higher brain functions including memory and cognition. Amyloid beta is the main constituent of AD senile plaques [1] and prevention of amyloidosis and dementia may require the diagnosis of individuals early in life to link chronic disease progression with early neurodegeneration.
In the current global epidemic the incidence of obesity and diabetes has been associated with non-alcoholic fatty liver disease (NAFLD) and insulin resistance, which in the developing and developed world may rise to between 30% and 40% of the global population [1,2]. Individuals homozygous for apo E4 develop AD but non-apo E4 individuals may also develop AD later in life, linked to chronic disease progression early in life involved in the induction of these AD cases (75–84 years, 44% AD cases). The association between chronic disease progression and AD indicates that clinical proteomics (Figure 1) may provide novel biomarkers with a serum protein profile that may diagnose early progression to later-life AD. Plasma biomarkers such as amyloid beta have been an important diagnostic biomarker for AD but non-reproducible and insensitive results for amyloid beta have been obtained for the diagnosis of AD [3,4,5].
The cholesterol–AD connection [6] has attracted considerable interest with relevance to treatment with nutritional diets that maintain cell cholesterol homeostasis. The calorie-sensitive anti-aging gene Sirtuin 1 (Sirt 1) is closely involved in global disease progression with accelerated NAFLD, adiposity, and AD closely linked to Sirt 1 downregulation, hypercholesterolemia, and dementia [1,2]. Sirt 1 is one of the nuclear receptors that is known to regulate several cell functions by deacetylating both histone and non-histone targets. Sirt 1 is an NAD (+)-dependent class III histone deacetylase protein that targets transcription factors to adapt gene expression to metabolic activity, insulin resistance, and inflammation in chronic diseases. Dyslipidemia in AD has now become relevant to amyloidosis with tissue lipidomic analysis that indicates elevation in sphingolipids (sphingosine 1 phosphate) and ceramides in insulin-resistant and AD individuals [1]. Membrane cholesterol and sphingomyelin interactions are critical to amyloid beta oligomer formation with increased cellular ceramide levels associated with cholesterol displacement in membranes with relevance to amyloidosis and AD [7,8,9]. The interest in clinical lipidomics in AD has accelerated in recent years with relevance to early diagnosis by lipidomics of AD when compared with protein biomarker studies and may provide reproducible results for late MCI, prodromal disease, and dementia [10,11,12]. Analysis of a spectrum of plasma, tissue, or cerebrospinal fluid lipids (fatty acyls, glycerolipids, glycerophospholipids, sphingolipids, sterols, and prenols) assists in the diagnosis of various neurological diseases such as AD that are linked to chronic diseases in global populations [13,14,15,16,17,18]. Furthermore, new blood biomarker lipidomic panels have been identified with diagnostic value relevant to the preclinical and late stages of AD [19,20].
The global deterioration scale created by Reisberg provides the stages of cognitive function for those suffering from a primary degenerative dementia such as AD [11]. Stages 1–3 are the pre-dementia stages and stages 4–7 are the dementia stages. Lipidomic and genomic information have become important to the diagnosis of the early stages [1,2,3] of AD (Figure 1), with abnormalities in cholesterol and lipoprotein metabolism [1] closely linked to the late progression of AD with changes in cognition or behavioral symptoms. Nutritional interventions for AD treatment and prevention in stages 1–3 have become important as the neuron disease that involves nuclear membrane changes induced by unhealthy diets and toxins is related to the corruption of the plasma and cerebrospinal fluid (CSF) dynamics, which may be reversible in early stages of the disease [21]. Plasma biomarker measurements by lipidomics and genomics (Figure 1) may provide more sensitive information compared with CSF measurements that may lead to erroneous diagnostic interpretations with lack of external quality assessment [22].
Information obtained from lipidomic and genomic analysis may provide information in relation to hepatic cholesterol metabolism, which is abnormal early in chronic disease and associated with neurodegeneration and biomarkers now relevant to diagnosis of early brain changes in individuals susceptible to AD. The use of lipidomic technology allows the study of the lipid composition of tissues such as the liver and brain that may determine the peripheral metabolism of cholesterol and amyloid beta that are important to the early stages of AD [23]. The brain–liver crosstalk is now central to the metabolism of amyloid beta, with the involvement of adipose tissue of relevance to hepatic amyloid beta metabolism [2]. Therefore, lipidomic and genomic tests for diagnosis of AD indicate that nuclear receptors are relevant to connections between insulin resistance, chronic disease, and AD. Downregulation of liver and brain cell nuclear receptors such as Sirt 1 in stages 1–3 of AD [11] is linked to chronic diseases (obesity/diabetes) and responsible for glucose, cholesterol, and amyloid beta metabolism disorders, which are abnormalities in the early stages of AD.

Clinical biomarker discoveries have become important with nutriproteomics [154,155,156] as a technology that could determine biomarkers that may assist with the maintenance of normal cognitive development in individuals at risk of AD. The ingestion of nutrients allows proteomic tools to characterize molecular and cellular changes in protein expression and function in the plasma and CSF [157,158,159,160] with respect to nutritional diets that activate the anti-aging gene Sirt 1 and allow proteins such as amyloid beta/alpha synuclein to maintain monomer interactions and prevent self-association that induces inflammation [38,39]. Low-calorie diets (glucose, fatty acids) regulate Sirt 1/adiponectin expression and nuclear interactions that involve nuclear receptors, transcription factors, and microRNAs that determine liver apo AI/apo B kinetics and ceramide metabolism with respect to amyloid beta metabolism in non-diabetic and diabetic individuals [161]. Integration of proteomics, lipidomics, and genomics technologies allows for the interpretation of various nutritional and dietary interventions that assist in the reversal of neurodegeneration in late MCI, prodromal disease, and dementia.
Nutritional research (low fat diets) that targets the intestine lowers the absorption of bacterial lipopolysaccharides (LPS) that have effects on acute inflammation, which involves lymphocytes, monocytes, and macrophages that stimulate tumor necrosis factor alpha (TNF-α) secretion from cells [162]. LPS induces NAFLD and insulin resistance, with insulin resistance linked to alterations in plasma/CSF sodium levels [163] (Figure 4). LPS alter apo E and amyloid beta interactions with accelerated amyloidosis [37,39,162,164] associated with biomarkers such as hepatic cytokines and APP-associated inhibition of reverse cholesterol transport [1,23]. Nutriproteomic diets, such as high fiber diets [6,135], have become important now that inflammatory regulation associated with LPS repression of Sirt 1 [21,37] has been linked to atherogenic diets. Nutriproteomic diets such as very low carbohydrate diets maintain the circadian rhythm, brain–liver amyloid beta pathways, and sodium balance [165], reverse cholesterol transport involving adiponectin [86,166,167], and prevent cognitive decline, cardiovascular disease, and diabetes. These diets involve the measurements of plasma/CSF levels of adiponectin, FGF21, VIP, Klotho, IGF-1, TSP-1, TGF-beta, and gelsolin and may be relevant to healthy dietary interventions (Figure 4).
Interventions with nutriproteomic diets in individuals with MCI to prodromal disease and dementia may allow activation of Sirt 1/adiponectin expression with the identification of changes in plasma/CSF biomarkers (Figure 3) relevant to treatment of individuals with severe forms of prodromal disease and dementia. Furthermore, high fat diets increase adipose tissue TSP-1 levels [168,169] and thus the risk for cardiovascular disease, neuron dysfunction, and defective NO pathways. Sirt 1 regulation of endothelial NOS has been reported with respect to neuroprotection and vascular-related diseases [170]. Diets that reduce TSP-1 improve adipose tissue apelin/Sirt 1 effects on nitric oxide disturbances and vasoconstriction [170]. Angiotensin II is critical to the regulation of TSP-1 levels in cells [171,172], with apelin/angiotensin II/TSP-1 interactions affecting toxic amyloid beta generation [170]. The effects of TSP-1 on inflammation involve TNF-α [173,174,175], which is relevant to the treatment of cognitive impairment and neuron dysfunction [176,177]. Adiponectin expression and TNF-α expression are connected with low adiponectin levels, which are associated with high TNF-α levels [178]. Adiponectin pretreatment has been shown to reduce hepatic TNF-α levels with inhibition of LPS-induced effects in the liver [179] and maintenance of apo E activity [162,164] involved in the reduction of TNF-α secretion [180,181,182]. Low fat diets are possibly important in the maintenance of hepatic Sirt1/adiponectin expression, with inhibition of LPS/TNF-α effects and maintenance of FGF21 effects in the adipose tissue [183,184,185,186] and VIP effects in the liver (apo E mediated) allowing for the clearance of peripheral amyloid beta [51].
Diets that contain zinc may maintain Sirt 1 expression [21] and prevent abnormal LPS/zinc interactions. Zinc is sensitive to HNF4 [187] and reduced hepatic TNF-α toxicity [188,189] may aid the prevention of insulin resistance and AD [1]. Nutriproteomic diets as a treatment for reduction of LPS effects may lower TSP-1 expression by peripheral cells [190,191,192] and improve peripheral LPS–protein interactions [193,194,195,196] to accelerate peripheral amyloid beta metabolism with respect to treatment of individuals with prodromal disease and dementia. Nutritional diets that activate Sirt 1 and maintain therapeutic VIP and FGF21 levels [51] accelerate hepatic LPS/mycotoxin metabolism without transfer to the CSF and brain compartment [21], which is consistent with the use of nutritional therapy to maintain CSF composition, recycling, and amyloid beta dynamics [197,198] for the prevention of early neurodegeneration (stages 1–3) and amyloidosis.

The susceptibility to AD earlier in life may now involve chronic diseases such as obesity, diabetes, and neurodegenerative diseases. Nutritional interventions and early diagnosis may reduce spontaneous amyloid beta oligomerization associated with the excessive global cost ($605 billion) of late onset AD (>65 years). In the global crisis the inflammatory effects of LPS on apo E/Sirt 1 neutralization reaction induce increased TSP-1 levels that may be relevant to multifactorial diseases including cardiovascular diseases, NAFLD, and neurodegenerative diseases. Nutritional interventions are required to reduce the absorption of LPS early in life to prevent induction of inflammation linked to circadian abnormalities, accelerated amyloidosis metabolic disease, and neurodegeneration. Technologies of lipidomics, genomics, and proteomics are required to assess early plasma lipid and protein biomarkers that indicate repression of nuclear Sirt 1, which involves oxidative stress, inflammation associated with programmed cell death in chronic diseases, and early stages of AD (Reisberg). The genomic, lipidomic, and proteomic interpretation may provide evidence that apo E/Sirt 1 repression and liver disease in global populations is the major defect in early and late stages of MCI with links to prodromal disease and dementia.

This work was supported by grants from Edith Cowan University, the McCusker Alzheimer’s Research Foundation, and the National Health and Medical Research Council. 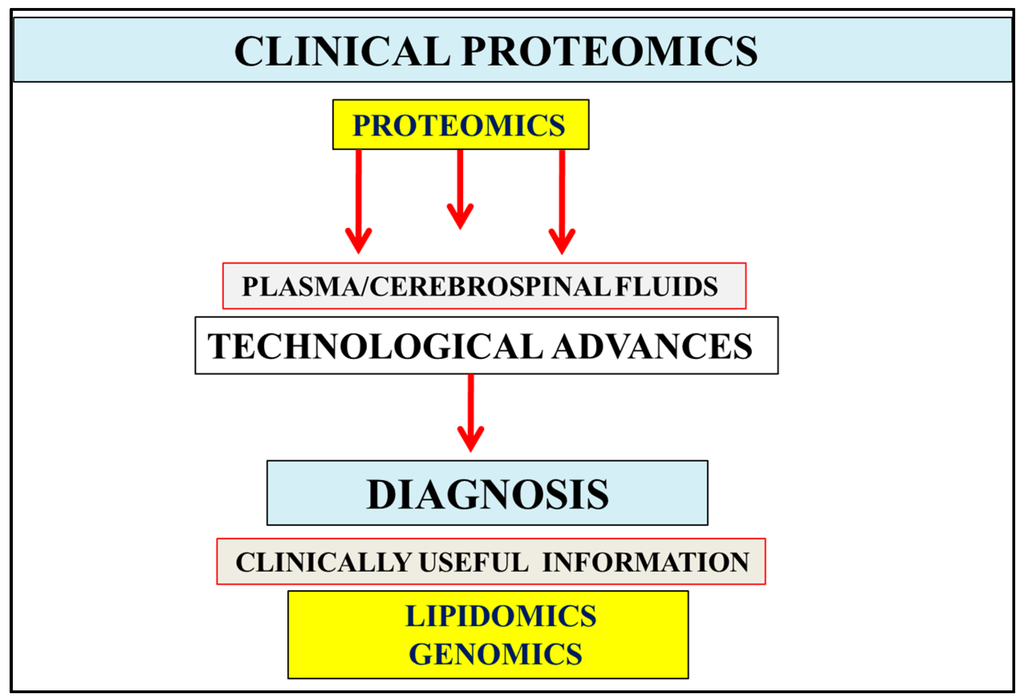 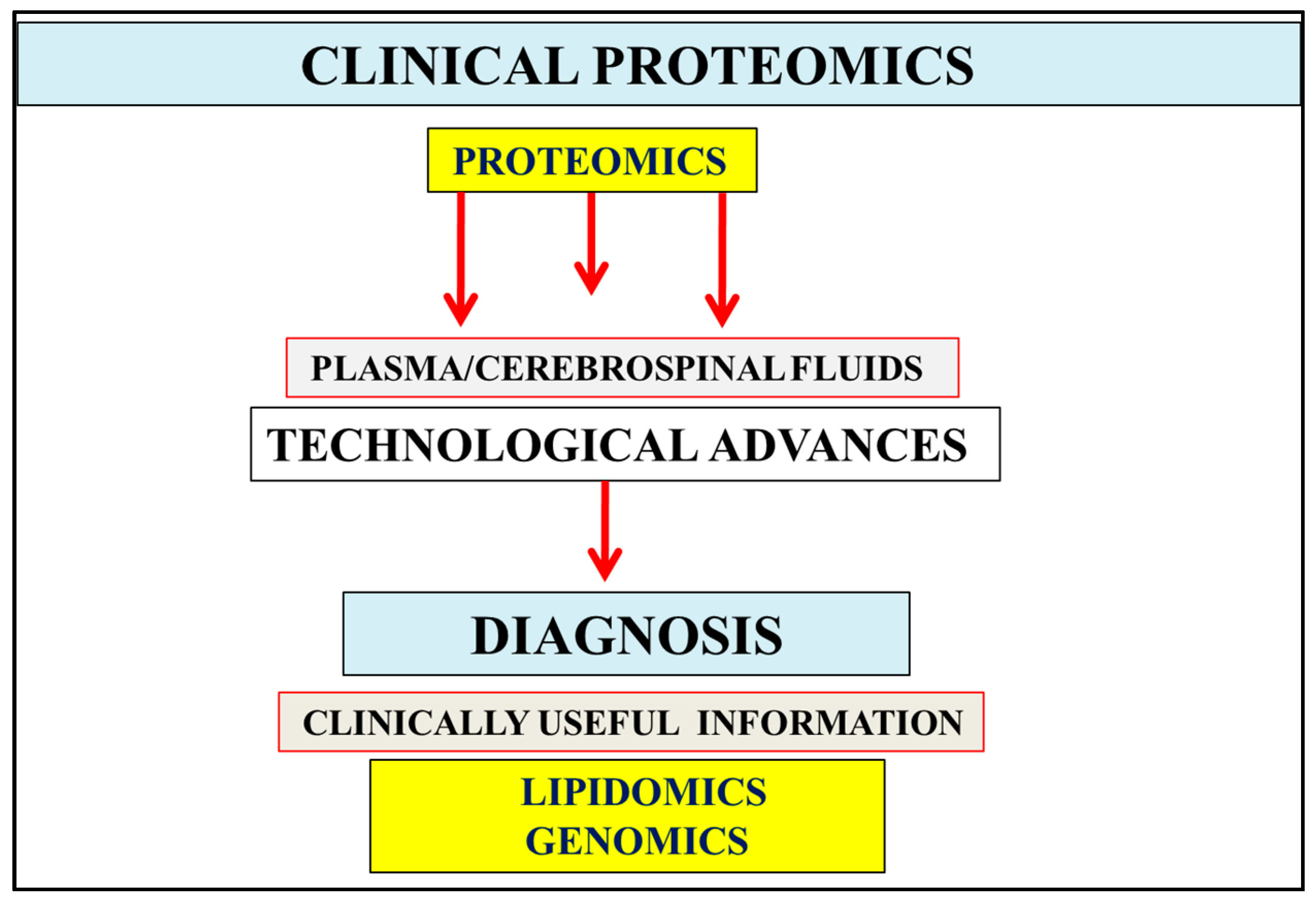 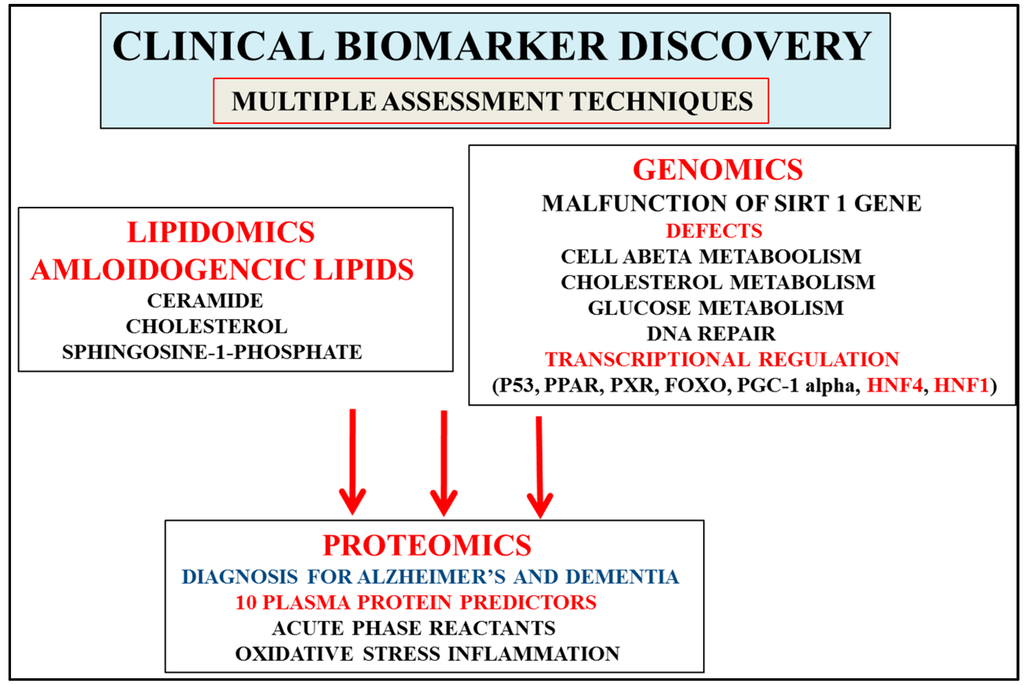 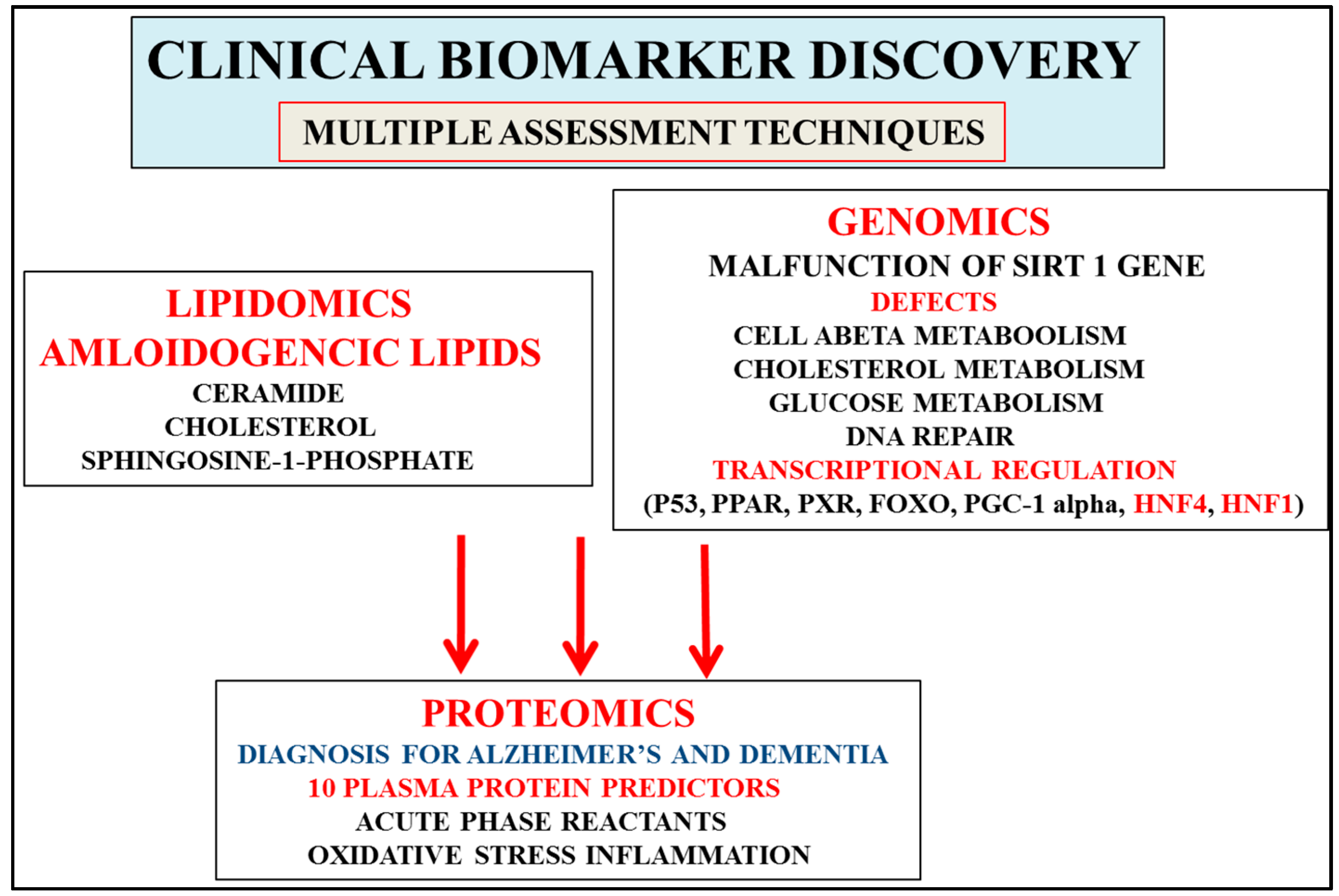 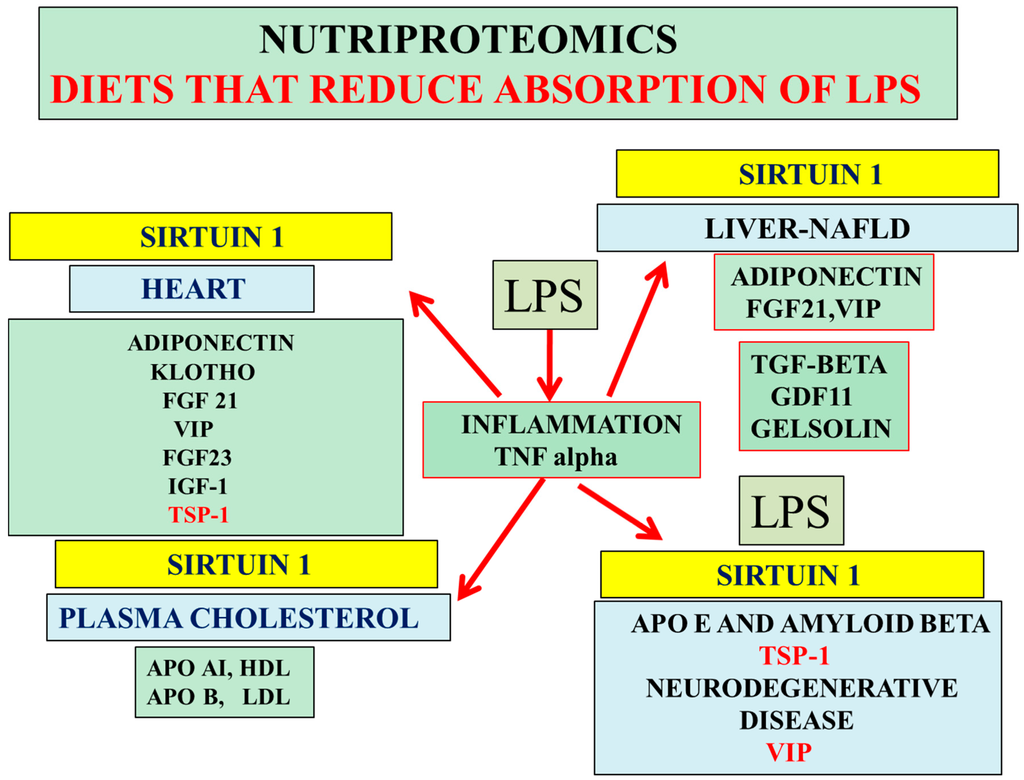 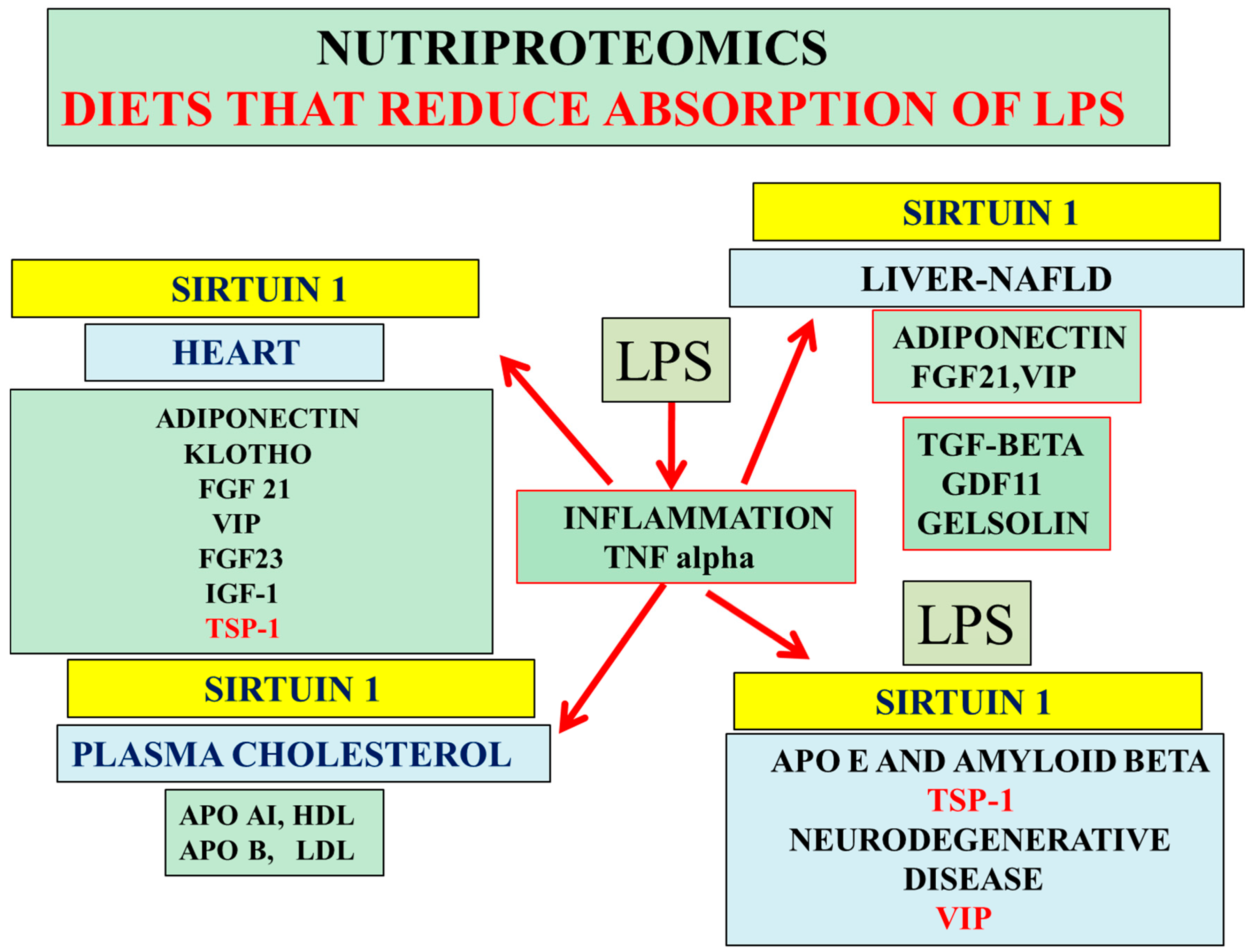 © 2016 by the author; licensee MDPI, Basel, Switzerland. This article is an open access article distributed under the terms and conditions of the Creative Commons by Attribution (CC-BY) license (http://creativecommons.org/licenses/by/4.0/).