Exploring of a Small-Scale Tourism Product under Economic Instability: The Case of a Greek Rural Border Area
Previous Article in Special Issue

The Impacts of Chinese FDI and China–Africa Trade on Economic Growth of African Countries: The Role of Institutional Quality

In the last two decades, Africa registered a period of sustainable and impressive economic growth. Some of the countries can be included among the fastest-growing economies in the world. Most African countries have registered a sustainable economic growth with an economic growth rate exceeding 5% per year over the past 15 years. The average growth rate of the sample African countries is presented in Appendix F. The growth registered in this period was supported by favorable external conditions, especially high commodity prices boom as a result of high international demand for commodities, and the increase in investment money and FDI flow in search of new economic opportunities at the global level have played a significant role (Zamfir 2016). Among external factors, a vital change that took place in Africa was the rise of Brazil, Russia, India, China and South Africa (BRICS countries) and their strengthening economic and trade relationships with African countries. While one should be careful in establishing a relationship between the emergence of the BRICS economies in Africa and Africa’s recent impressive economic growth record, the BRICS have certainly contributed to changing perceptions of Africa’s economic fortunes among the international donor community. The most important emerging player from the BRICS group on African soil is China because China provides the largest share of foreign finance for Africa from the South–South cooperation (Woods 2008).
China has a long trade relationship with African countries. However, the fastest growth of the trade between African countries and China was registered in the last two decades. According to trade data from the Global Trade Atlas, trade between China and Africa has increased at the fastest rate since 2000. The total trade between Africa and China has registered a compound growth rate of 24.7% in the last two decades. It also implies that the trade in goods and services has grown at 26.7% annually on average for the past two decades (Borojo and Yushi 2016).
Furthermore, Chinese FDI is distributed in almost all African countries. This reveals that Chinese outward FDI to African countries plays a prominent role in China’s economic interaction with many African countries (Miao et al. 2020). The distribution of Chinese FDI in sample African countries is reported in the Appendix D.
Additionally, the institutional environment of African countries is weaker and needs improvement. The mean score of the sample African countries’ institutional quality indicators indicates that the African countries continue to score below expectations with the negative scores outweighing the positive ones. For instance, the reports in Appendix E suggest that, on average, the political environment (−0.478) across the sample is quite unstable. This indicates that there is still political instability and violence, which taints the democratic atmosphere of the countries. The worst performer on the scale, which has proven resistant to change, is government effectiveness, which is still lagging behind with an average score of negative 0.651. Thus, the governments’ ability to offer quality public services and to formulate and implement policies that are indicative of government effectiveness is low. This is closely followed by a rule of law with the average score of negative 0.621. Furthermore, the regulatory quality and control of corruption, which are under the due attention of international organizations, has recorded the average negative score of 0.565 and 0.562, respectively (see Appendix E). Therefore, the scores of the institutional quality of African countries indicate that the countries’ performance in the institutional environment is weak and needs policy attention.

The impacts of the China–Africa trade and Chinese FDI remain to be one of the significant issues in empirical studies. This section focuses on the theoretical and empirical foundations of the trade between China and African countries and Chinese FDI, and provides a hypothesis based on economic theories and empirical studies. Furthermore, it gives a detailed discussion on the mediating role of institutional quality in the relationship between economic growth and FDI and trade.

This section discusses the strategy used to examine the impacts of the China–Africa trade and Chinese FDI on the economic growth of African countries and the data used for the exercise.

This study used data for the period 2003–2017 based on the data availability for 44 African countries. The sample countries included in this study are reported in Appendix C. Trade data between African countries and China were taken from the tralac database. The GDP of African countries, gross fixed capital formation, inflation, the domestic credit to private sector per GDP, mobile subscription rate and health expenditure were compiled from World Development Indicators (WDI). Chinese FDI to Africa data were compiled from United Nations Com Trade (UNCTAD) bilateral FDI Statistics and the China Statistical Yearbook by the Johns Hopkins China–Africa Research Institute. Financial aid data from China to African countries were obtained from the AidData website.
Institutional quality indicators such as the control of corruption, absence of violence and security, rule of law, government effectiveness, voice and accountability and regulatory quality of African countries were collected from Worldwide Governance Indicators (WGI) World Bank Group website. They feature the scores for various dimensions of institutional quality by combining information from several independent sources. They extract information from all these sources, transform their scales so that every indicator is constructed as a normally distributed random variable with a zero mean, unit standard deviation, and ranging approximately from −2.5 to 2.5 with higher values showing better institutions. Using these six indicators of the institutional quality of African countries, we derived a single composite indicator using principal component analysis. From Table A2, the eigenvalues of the first principal component of governance and institutional quality is greater than 1 (4.725 > 1). However, none of the other components have eigenvalues more than 1. Since the first component explains 78.8% of the original variables’ variation, the study uses the eigenvectors of the first principal component as weights in constructing an institutional and governance index (see Appendix B).

This research was funded by Humanities and social sciences fund of the Ministry of Education under grant number 20YJC860006. 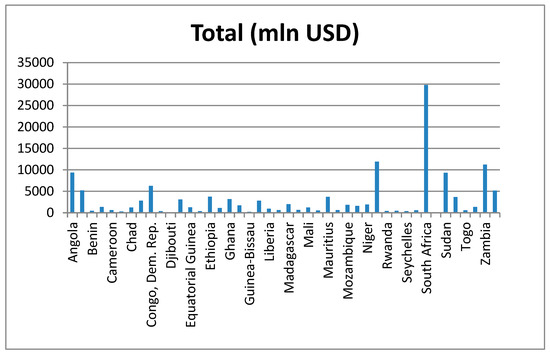 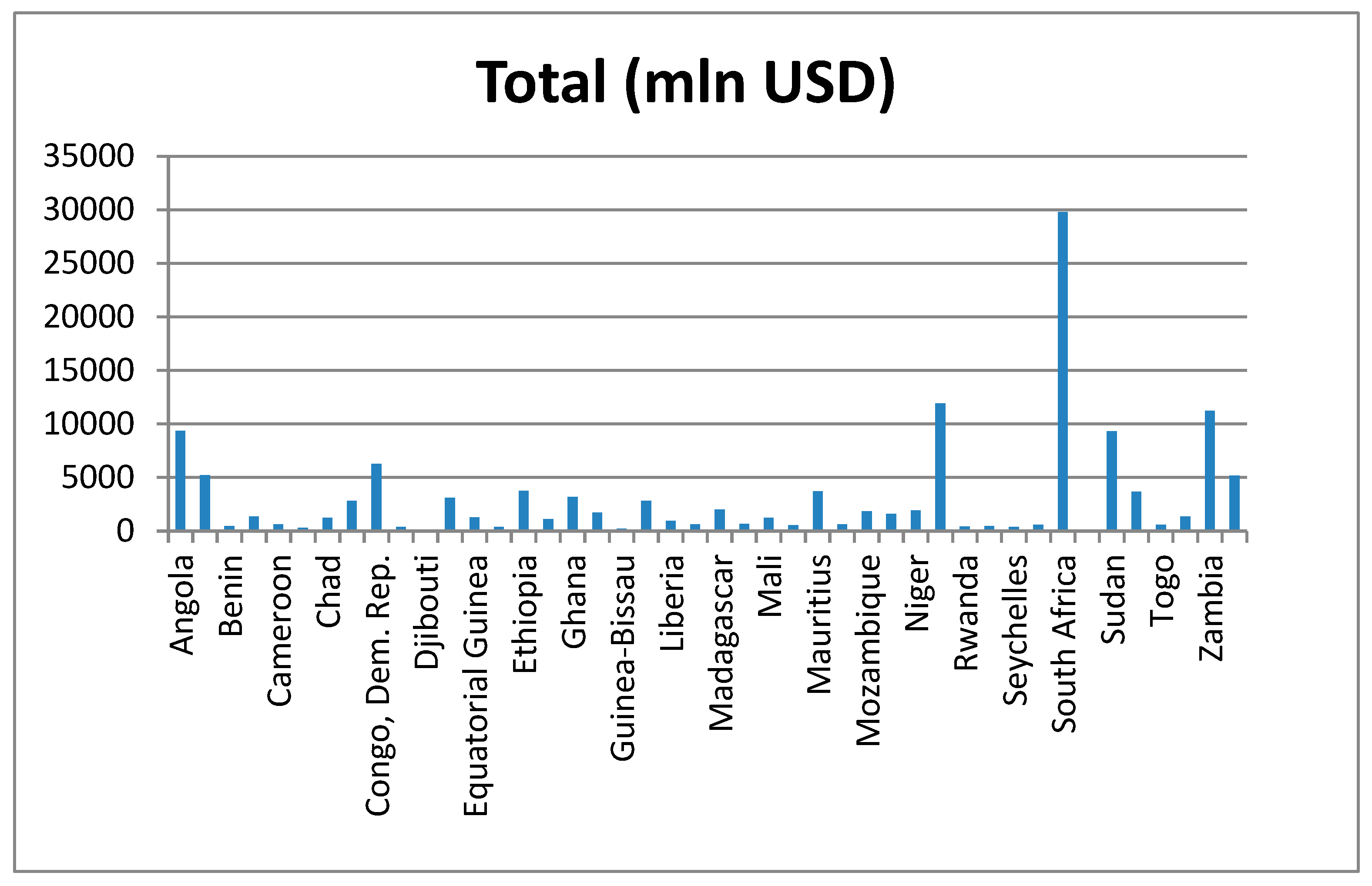 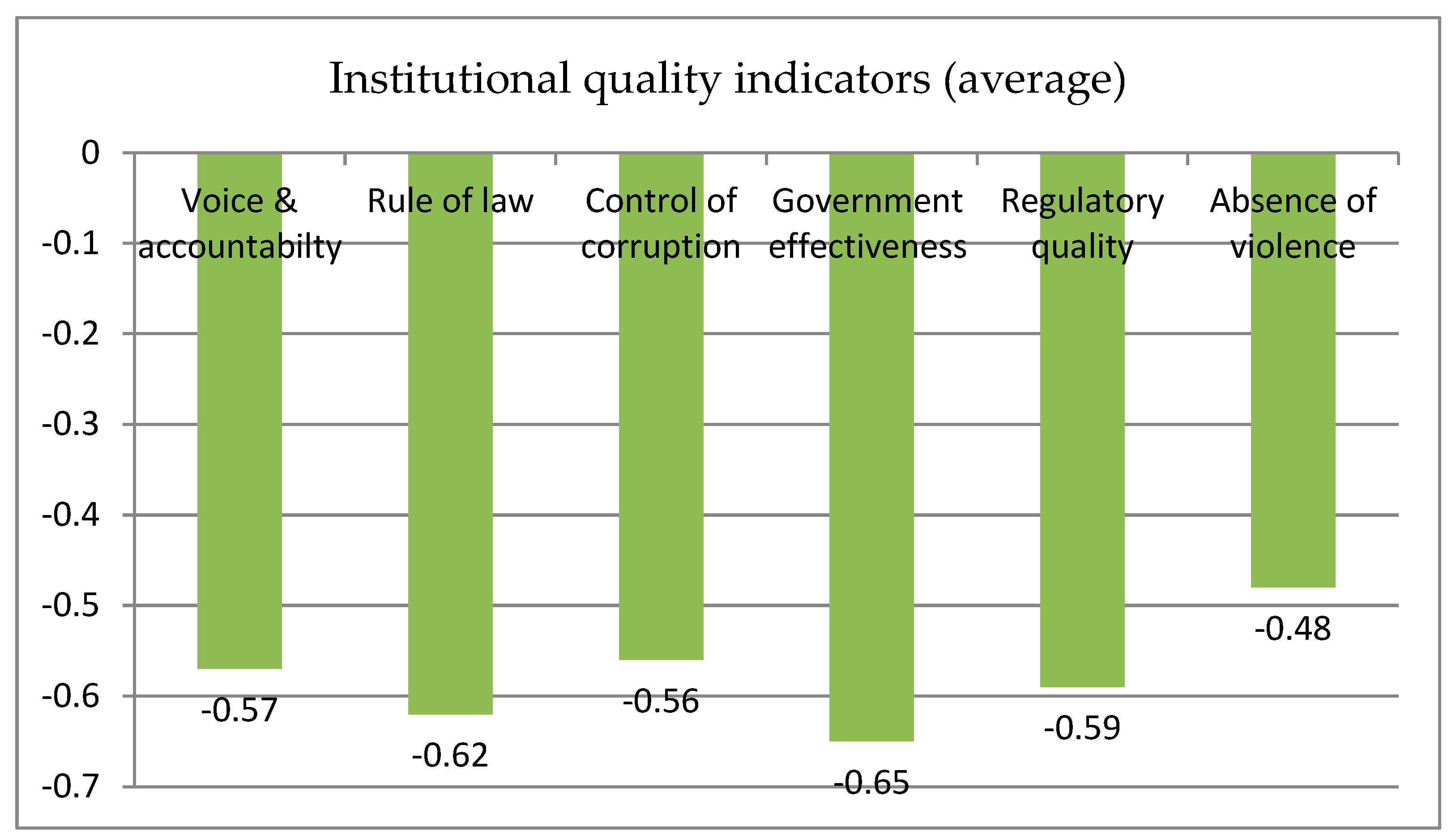