The Role of Oil Prices in Exchange Rate Movements: The CIS Oil Exporters

Fréchet Distribution Applied to Salary Incomes in Spain from 1999 to 2014. An Engineering Approach to Changes in Salaries’ Distribution

In November 2015, the salary distribution data in Spain was updated in the statistics database of the Spanish Tax Agency.1 This data is organized by taking into account several aspects of the Spanish society (gender, age, economic sectors, etc.). According to the best-selling newspaper in Spain,2 the most significant information was the salaries earned in relation to the salary brackets (see in Table 1 and Table 2 the number of salaried people and its weight in terms of total amount of paid euros, in relation to the salary, expressed in times the minimum wage), which demonstrates that the average annual salary in Spain fell in 2014 to the levels of 2007. Other key information from the statistics reflected in the media was the imbalance between genders.3
The aforementioned statistical information (included in Table 1 and Table 2) is organized in brackets of half minimum wage size until five times the minimum wage. This wage limit is followed by a bracket from 5 to 7.5 times the minimum wage and then by a bracket from 7.5 to 10 times the minimum wage. Finally, the statistics end with a more than 10 times the minimum wage bracket. In Figure 1, the distribution of the salaries paid is shown as a function of the salary bracket in 2014. A significant concern arises from this figure, as the different size of the brackets does not allow for fitting a mathematical distribution in order to obtain more information from the data.
The aim of the present work is to draw some conclusions from this data based on the empirical analysis normally used by engineers and scientists when studying a problem, which requires the use of mathematical models that can be parametrized in terms of a limited number of non-dimensional variables. This approach facilitates working with distributional functions that retain the most significant information reflected by the data. In addition, the possibility of defining the aforementioned functions from a limited amount of data (e.g., surveys) should be also mentioned as one of the main advantages of this methodology. To perform the present study:

The Fréchet Distribution Fitted to the Data

The proposed Fréchet distribution (i.e., Equation (2)), reproduced here for convenience: has been fitted to the normalized distribution of 2014 salaries earned in relation to the non-dimensional minimum wage, φ, see Figure 4. Fitting was performed with the least squares method using MATLAB. As can be observed in the figure, the correlation seems to be accurate. Other PDFs used in income analysis (Atkinson and Bourguignon 2015; Kleiber and Kotz 2003; McDonald and Ransom 1979; Klein et al. 2015) such as the log-normal distribution: the gamma distribution: and the Dagum distribution (Kleiber 2008): have been also fitted to the data with good results. Furthermore, the GB2 distribution mentioned in the first section (García et al. 2014): was also included in the study in order to compare the suggested approach with a more complex (and better)9 distribution. The above PDFs have been compared, for the 2014 data, with the proposed Fréchet distribution in terms of Root Mean Square Error (RMSE): where yn is the percentage of the salaries paid at the income bracket corresponding to the salary φn and f (φn) is the figure from the selected PDF at φn. The results show similar values of this error (RMSE = 4.423 × 10−2 [Fréchet]; RMSE = 4.410 × 10−2 [log-normal]; RMSE = 4.443 × 10−2 [gamma]; RMSE = 4.415 × 10−2 [Dagum]; and RMSE = 4.403 × 10−2 [GB2]) for the five distributions.
Once Equation (8) is fitted to the data, it is possible to estimate the salaries paid in the bracket between φ1 and φ2 minimum salaries: where TSP is the total amount of salaries paid (TSP = 311.28 billion euro in 2014, see Table 2). As aforementioned, the factor of 2 included in the expression above is necessary because the data is discretized in terms of half minimum wage. Equation (14) gives the total amount of salaries paid in 2014 with a 4.6% error rate (calculated from φ = 0 to φ → ∞, that is, leaving aside the contribution within the bracket [d, 0] [the location parameter, d, has a negative value in all studied cases]).

In the present work, the official data in relation to salaries paid in Spain from 1999 to 2014 has been analyzed. The Fréchet distribution was used as a way of studying the data using an analytic expression that depends on a limited number of parameters. The most significant conclusions resulting from this work are: 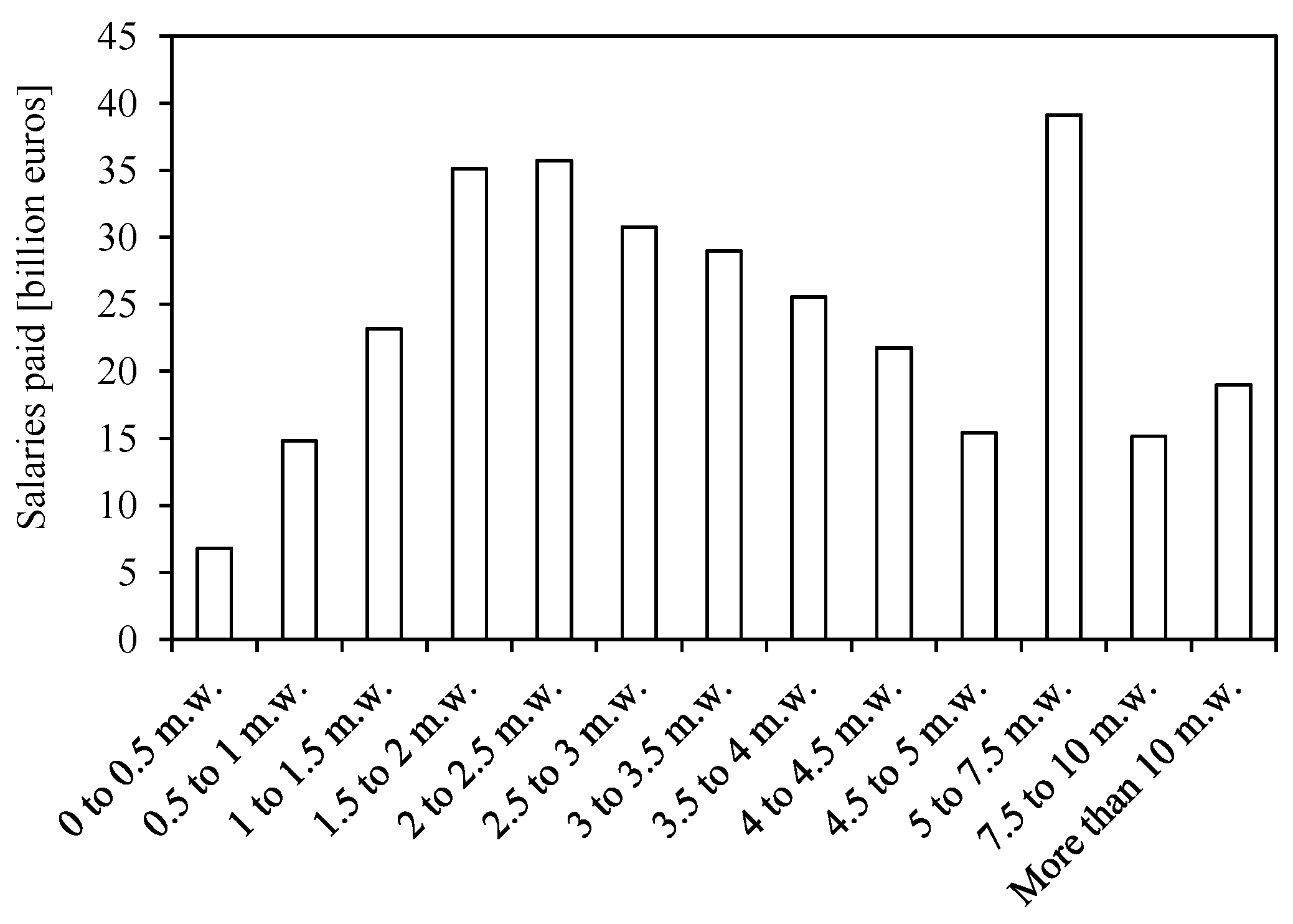 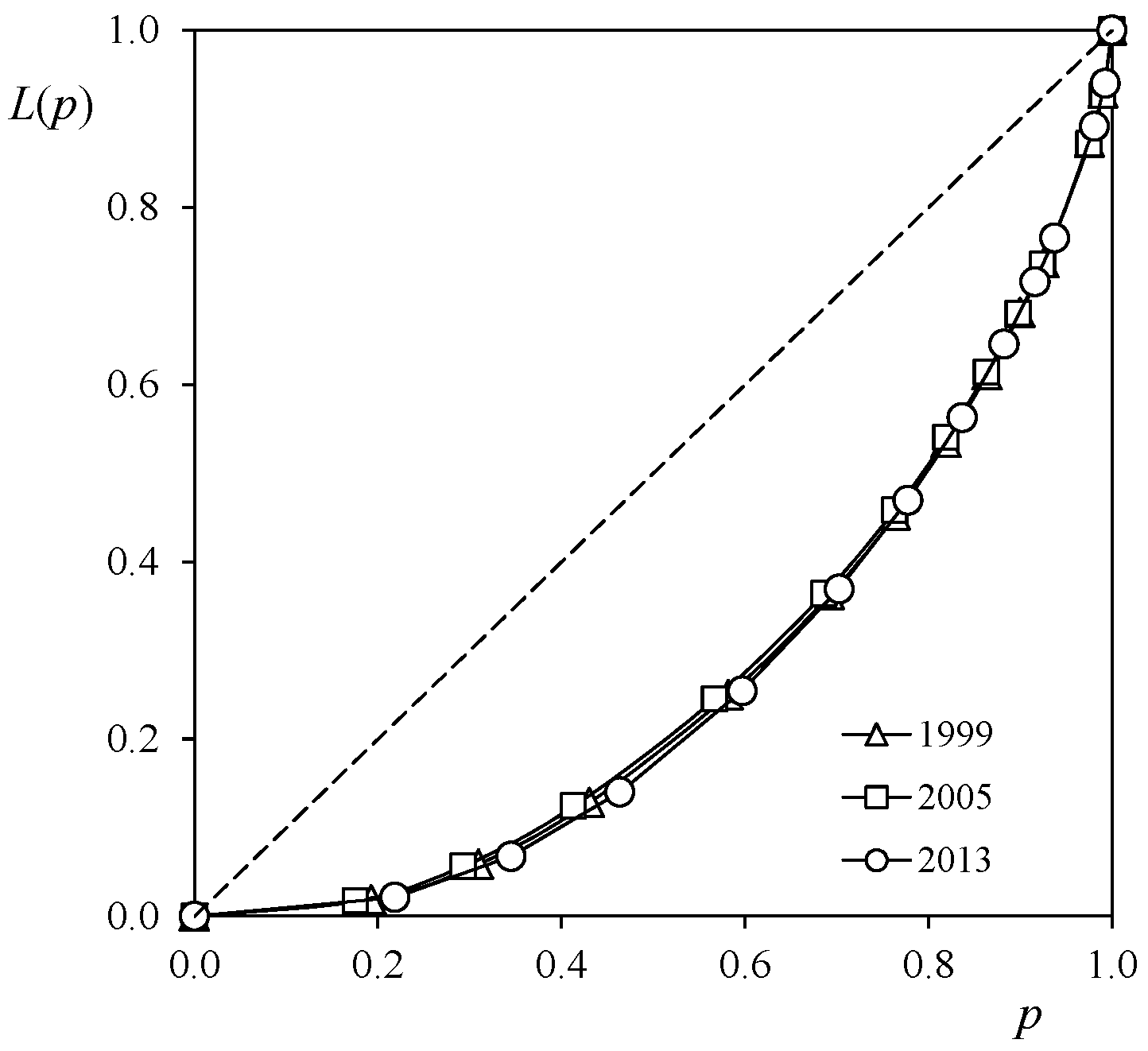 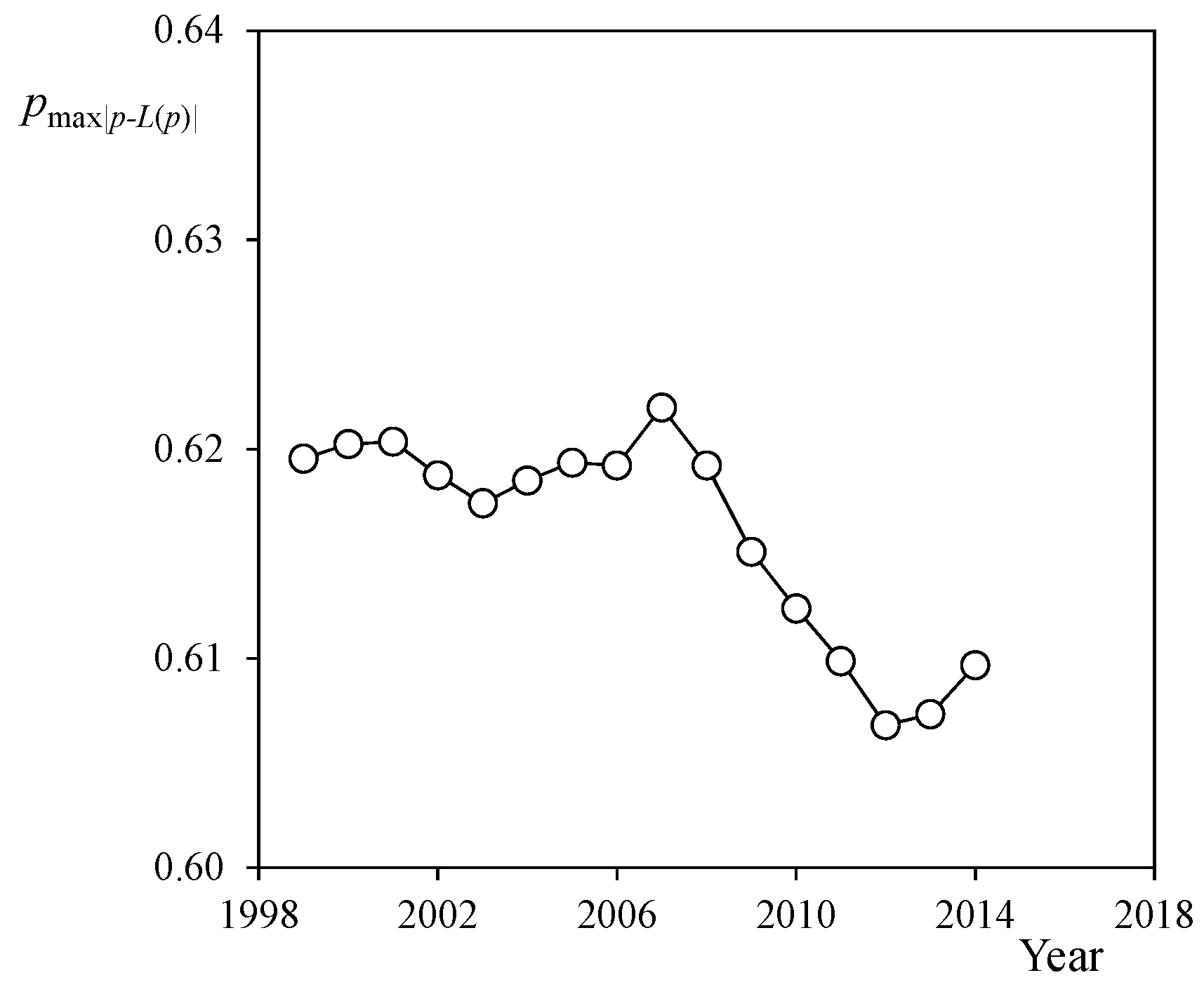