Fréchet Distribution Applied to Salary Incomes in Spain from 1999 to 2014. An Engineering Approach to Changes in Salaries’ Distribution
Next Article in Special Issue

The Role of Oil Prices in Exchange Rate Movements: The CIS Oil Exporters

Undoubtedly, oil prices play a crucial role in the macroeconomic performances of oil-exporting developing countries. In this regard, the exchange rate is one of the key macroeconomic indicators worthy of investigation. Existing literature shows that world oil prices play an important role in the appreciation of the exchange rates of oil-exporting developing countries. However, only a few studies have examined this issue by considering all three oil-exporting countries of the Commonwealth Independent States, namely Azerbaijan, Kazakhstan and Russia, together. In order to fill this gap and given the increasing importance of these economies in the world’s energy markets, this paper examines the role of oil prices in the movement of real effective exchange rates of the above-mentioned CIS countries. We applied the autoregressive distributed lag bounds testing method with a small sample bias correction to the data of these countries over the 2004Q1–2013Q4 period. The estimation results indicate that oil prices are certainly a main driver behind real effective exchange rate appreciation in the selected economies. Moreover, estimations show that productivity, to some extent, can also lead to the appreciation. The policy implication of this research is that an appreciation of the real exchange rate is harmful for the exports of non-oil goods and services in these countries. Since oil prices lead to the appreciation mainly through higher domestic prices, which is a result of tremendous public spending, decision-makers should reconsider the prevailing fiscal policy to make it much more counter-cyclical. View Full-Text
Keywords: real effective exchange rate; oil price; CIS oil exporters; autoregressive distributed lag bounds testing approach real effective exchange rate; oil price; CIS oil exporters; autoregressive distributed lag bounds testing approach
►▼ Show Figures 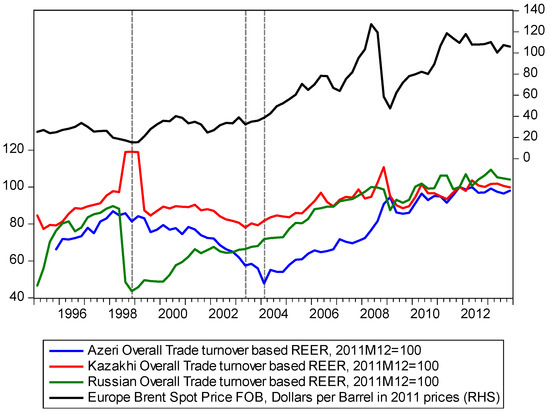