The Impact of Foreign Direct Investment (FDI) on the Environment: Market Perspectives and Evidence from China
Previous Article in Journal

Financial Reforms and Determinants of FDI: Evidence from Landlocked Countries in Sub-Saharan Africa

The examination of long-run relationships among financial development, economic growth, and other key growth factors in the Ivory Coast is carried out in four steps. We use a VAR framework depending on the time series characteristics of the dataset. Indeed, we first investigated the order of integration of the variables using standard tests for the presence of unit roots. Next, we extracted the common component of the financial development’s proxies. At the third step, the number of cointegrating vectors is tested using the Johansen maximum likelihood approach while the economically meaningful co-integrating vector is identified through tests of over-identifying restrictions. Finally, the causal relationship between the common component of the financial development’s proxies and economic growth is evaluated through tests of weak exogeneity.

This study uses annual data covering the period 1961–2013. It is well known that the span of the data is more important than the number of observations and there is no interest in the VAR framework by switching from low frequency to high frequency data (see Campbell and Perron, 1991 [60]).
Appendix Table A1 presents the summary statistics of the data. Only LNQC and LNL have increased steadily during the past 53 years. Data also indicates that LNQc correlates positively with LNG (0.5022), LNK (0.5844), LNRCB (0.2751), LNRCSP (0.6508), LNRCSPD (0.6777), and LNRDP (0.2943). However, the correlation between LNQC and both LNL (−0.4803) and LNTR (−0.2889) are negative (see Table A2).
Table A3 summarizes the results of three unit roots tests (ADF, PP, and KPSS) on each of the interested variable. The t-statistics indicate that all of the variables contain unit root except R. However, differencing (LNQC, FD, and Z) once reveals that all the variables are stationary at 1% level of significance. Thus, we have concluded that all series are integrated of order one, or I(1).

4.2. Extraction of the Common Component

For the estimation purpose of a Vector Error Correction (VEC) model, two approaches are available. The first one is the Johansen (1988) [51] approach which is used when all variables in the endogenous vector are integrated of the same order. The second approach that we can use is the Pesaran et al. (2001) [61] approach. This is better when the variables of the endogenous vector do not have the same integration order. We then focus on the Johansen method. Our endogenous vector components are all integrated of one order I(1). The first step of this approach is to estimate a VAR model on the endogenous vector without differentiation. where , is a set of exogenous variables (Dum9394, and ). This estimation aims to calculate the optimal lag (order of the VAR). Thus the VEC order is . After the estimation of the optimal order of the VAR, we should run the trace and maximum eigenvalue tests (Johansen, 1988 [51] and Johansen and Juselius, 1992 [54]). These two tests allow us to conclude about the existence and the number () of long run relationships in the endogenous vector. Once we estimate this number of long run relationships (, where 3 denotes the dimension of our endogenous vector), we can estimate the following VEC: where denotes the residual of the j-th long run equation.
The last step is to test the stability of the VEC, the non-serial correlation (Breusch-Godfrey Lagrange Multiplier “LM” test), the homoscedasticity of residuals (the White homoscedasticity test with and without cross-terms), and the normality (Jarque Bera multivariate normality test based on Cholesky decomposition). This last test is useful but not compulsory (Gonzalo, 1994 [62]).

This paper analyzes the relationship between the financial development and the economic growth in the Ivory Coast, using annual data from 1961 to 2013. We constructed the common component of four financial indicators to represent the financial development, of which only two were retained: the ratio of bank credit (domestic credit of the banking institutions on GDP) and the deposit ratio of liabilities (total deposits of the banking institutions’ liabilities to GDP). The common component procedure used in this work was developed by Lumsdaine and Prasad (2003) [49]. The dynamic relationships between the common component of the financial development and the economic growth in Ivory Coast, which are of significant concern to policy makers, were also established.
The common component has a significant long run relationship with economic growth in the Ivory Coast. The results indicate that both the deposit ratio of liabilities and the common component cause the economic growth in that country. In other words, the causal link between economic growth and financial development is unidirectional. In addition, our results address the identification of the appropriate proxy for the financial development in the Ivory Coast, which is the deposit ratio of liabilities.
The findings of this study help to understand the conflicting results in the literature as many studies rely on single indicators, and hence are unable to identify which financial sector variables have positive growth-enhancing effects and which do not. Accounting for the structural break in the model did not significantly change the results, implying robustness of our estimates. Furthermore, these findings have implications on the program of the Ivorian government in terms of the development of a sustainable economic growth program.
A number of recommendations can be drawn from this work. Firstly, we recommend caution in the choice of financial development indicators as policy instruments, particularly an emphasis on the deposit ratio of liabilities in the design and implementation of growth policies. On the basis of the evidence in this study, policies that improve access to affordable credit by the private sector, including small and medium enterprises (SMEs), would spur the needed innovation, expansion in the capacity of the agricultural sector, the industry and manufacturing companies to generate the expected employment levels, household incomes and the overall economic growth. Secondly, our findings also indicate that expansionary fiscal results could be inimical to economic growth. The Ivorian government should reduce macroeconomic uncertainty by taming inflation towards growth-enhancing targets while promoting policies to reduce high lending interest rates on credit as well. Finally, the Ivorian government should adopt to the following course of actions to protect the Ivorian from an abrupt increase in prices: (1) enact or expand conditional cash transfer programs, (2) provide short to long-term employment opportunities to marginalized Ivorian people (such as the youth), and (3) intensify the monitoring of prices of certain goods and services and impose stiffer penalties on violators.
Since the temporal framework of this study does not cover the recent years (2015−2016), we need to highlight that the Ivory Coast is engaged in several financial reforms. The authorities started to implement these reforms in 2014, in order to strengthen the stability of the financial sector and to promote its development. The key components of these reforms include the following: (1) restructuring the public banks, (2) strengthening the transparency in financial data handling, (3) deepening the financial market by diversifying the capital market; (4) preserving and increasing the professionalism of the microfinance sector, (5) increasing small and middle-sized enterprises (SMEs) access to credit and to leasing, (6) fostering credit for mortgages, (7) regulating traditional or customary land tenure, (8) organizing producer associations, (9) rationalizing access to guaranty funds and developing a strategy to finance subsistence agriculture, and (10) strengthening the supervision of insurance and broadening insurance coverage to a larger share of the population. It seems to us that these reforms support the idea that financial development would be very important for the economic growth in the Ivory Coast. Conclusions reveal that the points 1, 2, 3, and 5 among the reforms undertaken, are in line with the findings of this paper.

The authors would like to express their sincere thanks to the Florida State University Center for Economic Forecasting and Analysis (CEFA), the University Alassane Ouattara (Bouake-Ivory Coast), and the University of Cergy-Pontoise (France), and the ENSEA (Côte d’Ivoire) for their support on this portion of the project. The authors would also like to express their gratitude to Julie Harrington and Vakaramoko Diaby for their guidance and advices in the development of this paper.

The paper is a joint contribution of all co-authors.

I Descriptive Statistics on Key Variables

The values are the t-statistics and we use the Mackinnon (1996) [65] one-sided p-values. ADF and PP tests have null hypotheses of unit root in the series while KPSS test has null hypothesis of no unit root in series. The test equations included trend and intercept. Lag lengths were based on Schwarz’s (1978) [66] Information Criterion. For the PP test, the optimal bandwidth using Newey-West was applied.

The rows that contain values with maximum stars (*) indicate the significance levels of lag to be considered in a VAR model. Note that for a VECM, the optimal lag will be that of the VAR minus one.

Table A5. Lag length for the VECM with lnrdp.

Table A6. Lag length for the VECM with common component

There are two major tests to conduct: the residuals test and the stability test. Residuals tests are summarized in Table A4. The white heteroscedasticity test on the three estimated models reveals that residuals are homoscedastic in all models. The Breusch-Godfrey LM test for non-autocorrelation on the residuals leads to the conclusion that there are no serial correlations in residuals. For the normality test, the applied Jarque Bera test reveals that a part of the model with “LNRDP”, the other two estimated models meet the normality hypothesis. However, the model with “LNRDP” has no normally distributed residuals and is not weak for estimated coefficients or post estimation tests (Gonzalo, 1994 [62]). Thus, the residuals series for the estimated models have good properties. 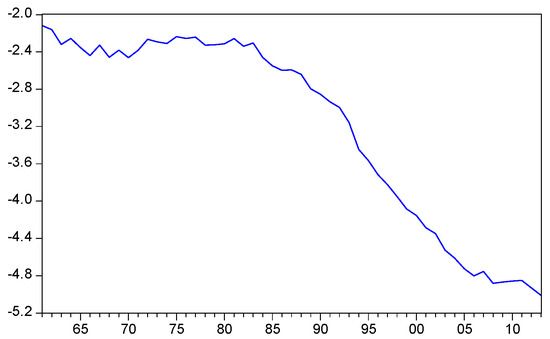 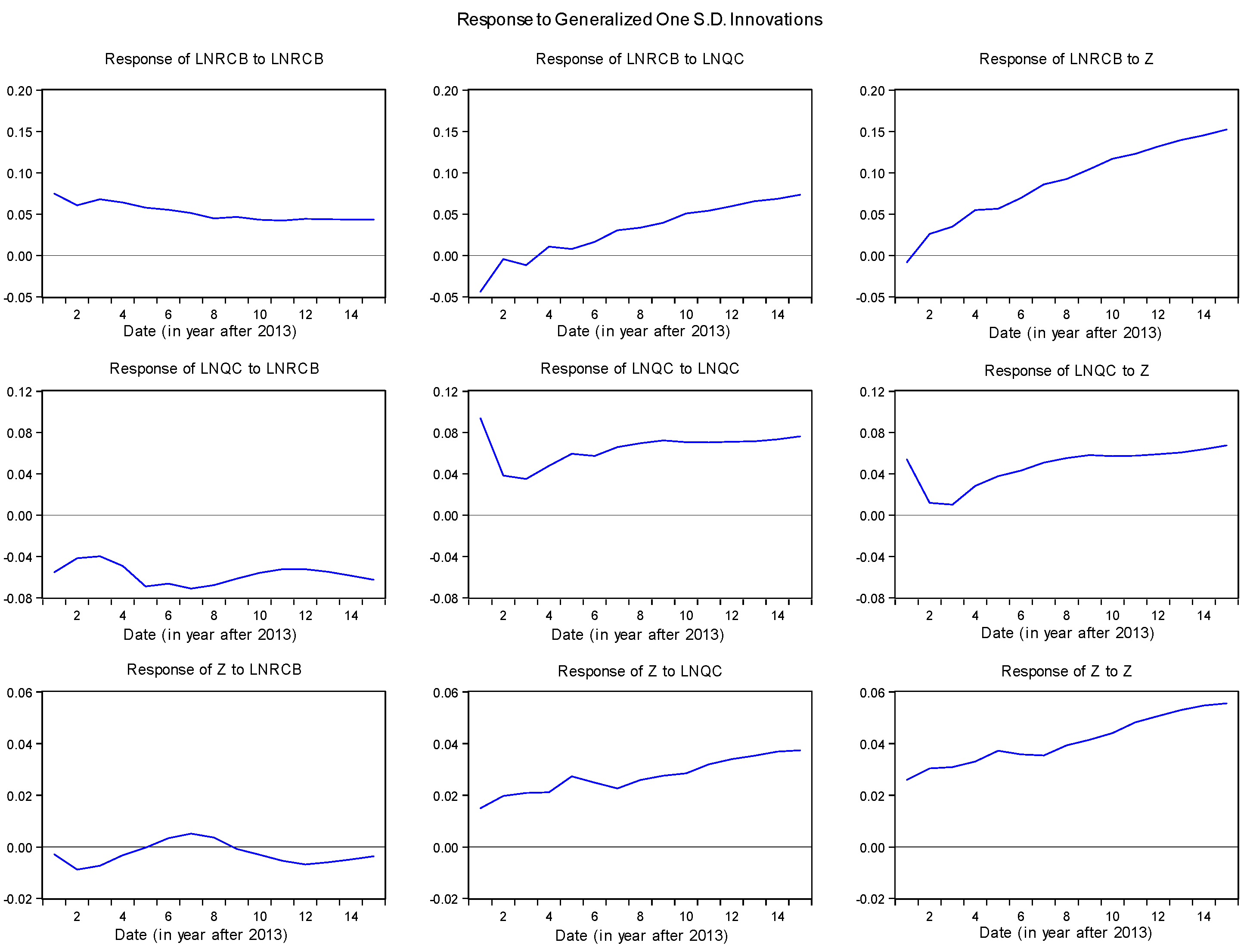 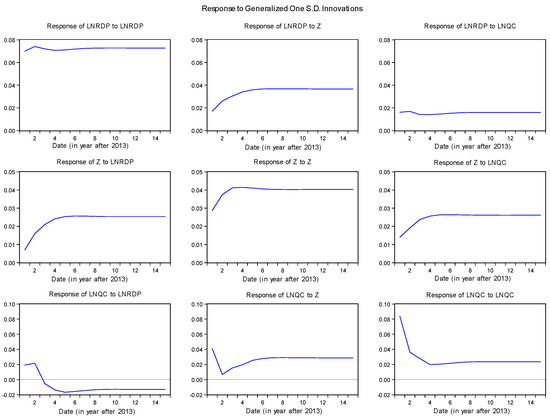 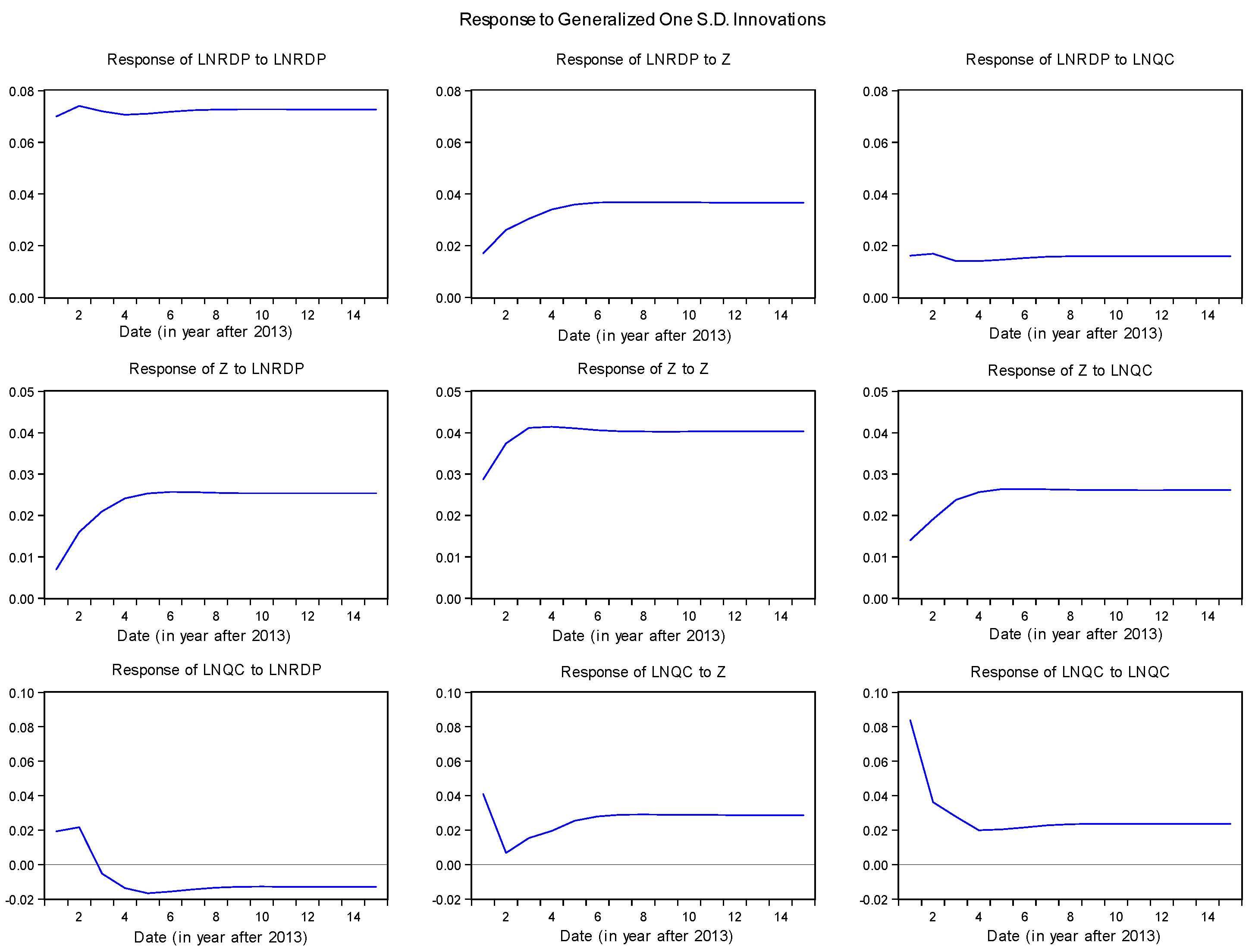 Table 1. Long-run equations (three models).
Notes: Trend and C stand respectively for the trend and the intercept of the regressions. Standard errors are in parenthesis.