In Sweden, as in many other countries, the roles of pharmacists have changed over the years. From primarily dispensing medications, pharmacists have become more clinically involved in patient care in different ways in the healthcare system [1]. For example, clinical pharmacists as part of a ward team have become more common in hospitals and primary care, and patient care services and different business models have also been developed in community pharmacies. Some of these changes in job assignments might be due to the re-regulation of the Swedish pharmacy market that took place in 2009. This re-regulation implied a transition from a state-owned pharmacy monopoly to an open pharmacy market, including both community and hospital pharmacies [1,2,3,4]. Taken together, these changes might have affected pharmacists’ job satisfaction. This is important because performance, motivation, and productivity are factors that are positively linked to job satisfaction, while lack of job satisfaction might affect patient care and safety negatively and increase job turnover [5,6,7,8,9].
Several studies have addressed pharmacists’ job satisfaction with different results. At an international level, a study performed in Saudi Arabia found that most of the pharmacists in different healthcare settings were satisfied with their current job (39% satisfied and 25% slightly satisfied) [6]. A recent study in Malaysia found that job satisfaction among community pharmacists was high (77% were satisfied with their jobs) [10], whereas another study in Malaysia among pharmacists in the public sector reported that only 52% were satisfied with their current job [11]. Further, in Northern Ireland, a little more than half of the community and hospital pharmacists reported that they were satisfied with their current job “most of the time”, and in that study, job satisfaction was linked to stress levels [12]. Many factors might contribute to pharmacists’ job satisfaction and dissatisfaction, according to previous research. For example, lack of time for interaction and lack of recognition can affect job satisfaction negatively [13]. The setting seems to be important, and one study performed in Great Britain found that community pharmacists were less satisfied compared to pharmacists working in other sectors [14]. Further, continuing professional development (CPD) has been found to be of importance for job satisfaction [15], as well as the female gender [16]. Age, income, and part-time work are other factors associated with job satisfaction [11,16,17,18].
Umeå University offers three pharmacy programs—a three-year Bachelor of Science in Pharmacy program, a five-year Master of Science in Pharmacy program, and a two-year Master of Science in Pharmaceutical Science program. The programs were started in 2003, 2012, and 2010, respectively. Graduates with a Bachelor of Science in Pharmacy degree can apply to the two-year master’s program in order to obtain a master’s degree. In addition, there are two different professional degrees in Sweden prescriptionists (with a bachelor’s degree) and pharmacists (with a master’s degree). The term pharmacist will be used throughout the paper, including both professional degrees. All three pharmacy programs are web-based, and the online material consists of recorded video lectures, assignments, and animations and is available through a virtual learning environment. Meetings between students and teachers occur online approximately once a week. In addition, the students are gathered on campus 2–4 times each semester for lab work, oral presentations, and role play.
A questionnaire was previously sent out to those who had graduated from pharmacy programs at Umeå University, Sweden, between 2006 and 2014 [19]. That study found that most graduates (91%) were satisfied with their jobs. The study also found that the factors of access to CPD and the perception that the knowledge and skills acquired during university education are useful in the current job were significantly associated with job satisfaction. Because of the aforementioned changes in pharmacists’ roles and assignments, it would be interesting to investigate the present level of job satisfaction and if there have been any changes over time. The aim of the present study was, therefore, to explore job satisfaction among pharmacists graduating from the pharmacy programs at Umeå University, Sweden, between 2015 and 2018, and to compare this with those graduating between 2006 and 2014.

This cross-sectional study was conducted among pharmacists who graduated from Umeå University in Sweden between 2015 and 2018. There are four universities offering pharmacy education in Sweden, and all of them are public universities. The curricula of all pharmacy programs are similar and include courses in chemistry, biomedical science, physiology, pathology, toxicology, pharmacology, pharmacokinetics, pharmacotherapy, pharmaceutics, and pharmacy practice. The Swedish Higher Education Authority is the centralized accrediting body, responsible for the evaluation of the quality of higher education and research. There are about 350–400 pharmacists graduating in Sweden annually, of which about 60 graduates are accounted for by Umeå University [20]. In total, there are about 10,000 registered pharmacists in Sweden [21].

A questionnaire was sent out to those who had graduated from the Bachelor of Science in Pharmacy, Master of Science in Pharmacy, and Master of Science in Pharmaceutical Science programs at Umeå University. The total number of graduates was 222, and 16 graduates had earned both a bachelor’s and a master’s degree. The paper questionnaire was sent out in February 2019 to the graduates by post to the address registered in the university’s administrative register. Addresses in the university´s administrative register are continuously updated against the Swedish Tax Agency, which manages the civil registration of private individuals in Sweden. Together with the questionnaire, a postage-paid envelope was included. The graduates were asked to return the questionnaire by 15 March 2019. Sixteen graduates did not live in Sweden and consequently did not have an address in the university´s administrative register, and to those, an e-mail was sent with an invitation to participate in the survey. Two of those accepted to participate in the survey, and the paper questionnaire was sent by post. No reminders were sent out. Data were collected during February and March 2019. Ninety-four graduates completed the survey, giving a response rate of 42%.
In 2015, a similar survey was conducted with graduates graduating between 2006 and 2014, and the present questionnaire was developed on the basis of the previous questionnaire [19]. The questionnaire asked the graduates about their current job and job assignments, their job satisfaction, and their education. Job satisfaction was evaluated using a five-item validated version of the survey from McCann et al. [12]. The questions were translated into Swedish and then back-translated into English. These questions regarding job satisfaction were also used in the alumni survey from 2015 [19].

Data from the present survey in 2019 were compared with data from the survey in 2015, and descriptive statistics were used to summarize the data. Results from the survey in 2015 were published previously [19]. The basis for comparing the present study with the previous one was to enable job satisfaction to be studied over time. The investigation in 2015 was the first to study job satisfaction among pharmacy graduates at Umeå University, and this group may, therefore, be considered as a baseline. Job satisfaction was measured with the question, “All things considered, how often are you satisfied with your job?”, and the answers were dichotomized into “not satisfied” (those who responded “never or rarely” and “sometimes satisfied”) and “satisfied” (those who responded “satisfied most of the time” and “satisfied all of the time”). The answers to the questions “how often do you think the idea of spending the remainder of your working life in a job like your current one is depressing”, “how often do you leave work with a ‘bad’ feeling”, and “how often do you get so wrapped up in your work that you lose track of time” were all dichotomized into “never/sometimes” (those who responded “never or rarely” and “sometimes”) and “most of the time/all of the time” (those who responded “most of the time” and “all of the time”). The answers to the question about access to CPD were dichotomized into “limited” (“limited” and “very limited”) and “good” (“satisfactory”, “good”, and “very good”). The answers to the question of whether “the knowledge and skills you acquired during your training are useful in your current job” were dichotomized into “disagree” (1–3 points) and “agree” (4–5 points). The answers between the groups were compared using the chi-squared test.
Data from the paper questionnaires were manually compiled using Excel. Simple logistic regression analyses were conducted to investigate the association between job satisfaction and the factors of age, gender, employee category, current employment, income, years since graduation, access to CPD, and if the knowledge and skills they acquired during their training are useful in their current job. Most of these factors were found to be associated with job satisfaction in previous research and were, therefore, of interest in the present study [11,14,15,16,17,18]. A multiple logistic regression analysis was conducted, including significant variables from the simple models, and these also included age and gender. Results are presented as odds ratios (ORs) with 95% confidence intervals (CIs). The significance level for all statistical tests was set at 5%. All analyses were conducted using Statistical Package for the Social Sciences (SPSS) for Windows version 26 (IBM, Armonk, New York, NY, USA).

This type of study does not require ethical committee approval in Sweden. All respondents were given information about the aim of the study and that the data would be treated as strictly confidential and that all answers would be anonymous.

3.1. Characteristics of the Graduates

Strengths and Limitations of the Study

This study has some strengths and limitations. An advantage is that the study enabled job satisfaction to be studied over a relatively long time period, i.e., between 2006 and 2018, when comparing two groups. However, job satisfaction can be regarded as a subjective matter and might vary depending on individual preferences and might also vary over time for one individual. The questions about job satisfaction were asked at a single time point, and this has to be taken into account when interpreting the results. Furthermore, the results might not be representative of the pharmacist workforce in Sweden because all participants had graduated from the same university. It would be interesting to conduct a study, including pharmacy graduates from other universities in Sweden, in order to explore if there are any differences regarding job satisfaction due to regional differences or differences in the educational set up (i.e., campus versus distance-based education). In addition, selection bias cannot be excluded because graduates who are more positive with regards to their profession might have been more likely to answer the survey compared to those who are more negative.

We thank the graduates who participated in the survey. 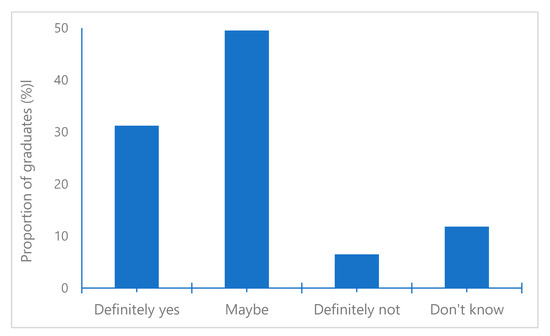 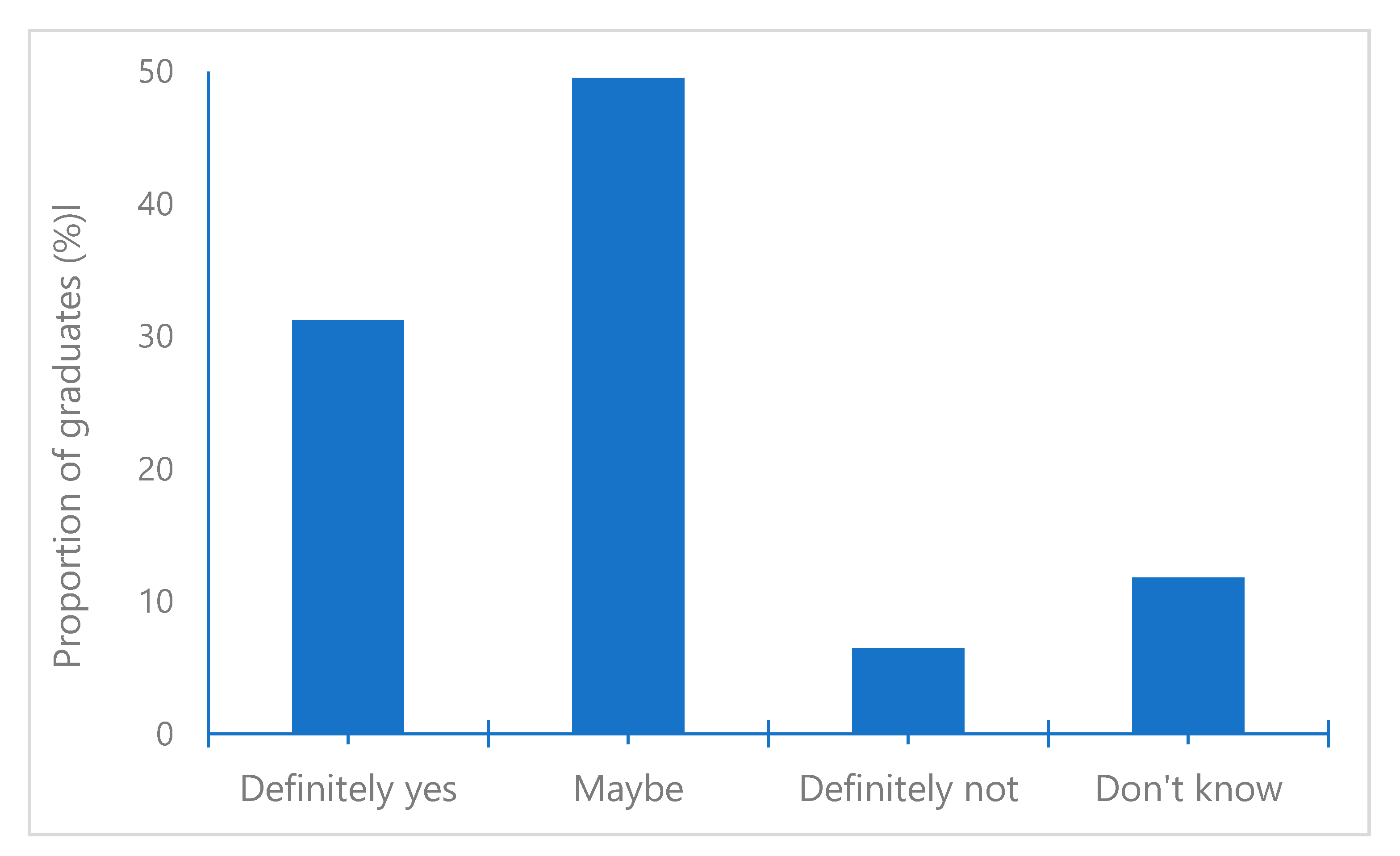 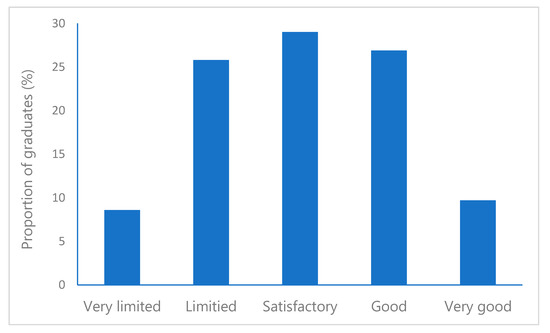 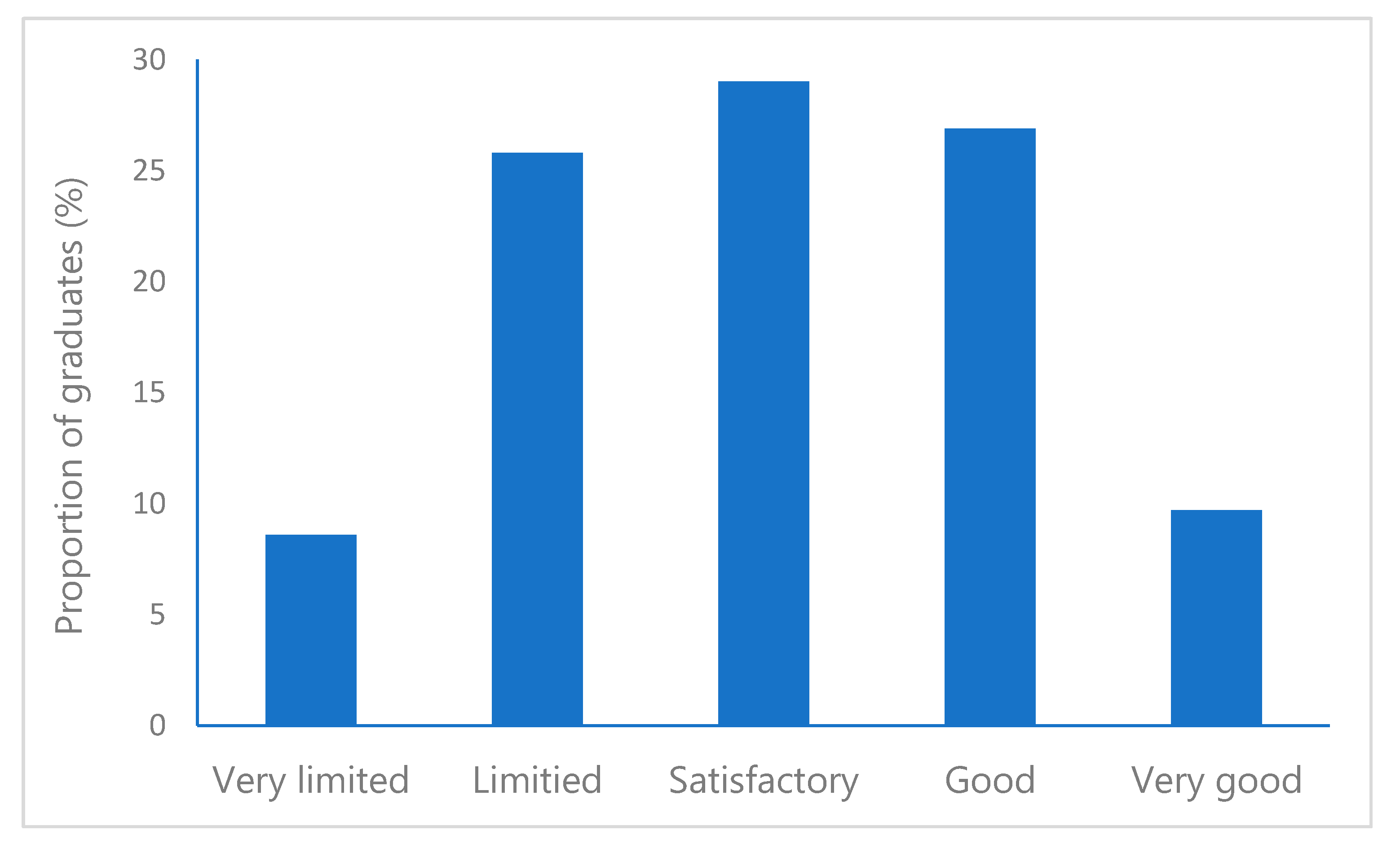