Medically underserved populations (MUPs) are identified by the Health Resources and Services Administration as populations with a lack of access to primary care services [1]. The calculation for defining a population as medically underserved includes the ratio of providers to population, the percent of the population living at the federal poverty level, the percentage of the population aged 65 years and over, and the infant mortality rate [2]. The work of Murphy et al reported that more than 43% of the U.S. population reside in medically underserved areas (MUA) and that MUAs are not evenly distributed throughout the U.S. [3]. Members of Indian Tribes are automatically designated as MUPs and health professional shortage area (HPSA) populations [4]. An HPSA designation may mean the local population has poor access to primary medical care, dental care, and/or mental health care, while an MUA/MUP designation is based on health status, demographic factors, and the population-to-provider ratio. Immunization rates in American Indian/Alaska native patients are historically lower than other populations. According to the U.S. Health and Human Services Office of Minority Health, American Indian/Alaska Native adults aged 18 years and over are 10 percent less likely than their non-Hispanic white counterparts to receive the influenza vaccine [5].
Indian Health Service (IHS) is an agency within the Department of Health and Human Services working to improve the health of MUPs and is responsible for providing federal health services to American Indians and Alaska Natives [6]. IHS provides a comprehensive health service delivery system for approximately 2.6 million American Indians and Alaska Natives, who belong to 573 federally recognized tribes in 37 states. The mission of IHS is to raise the physical, mental, social, and spiritual health of American Indians and Alaska Natives to the highest level, creating healthy communities and quality health care systems through strong partnerships and culturally responsive practices [6].
Whiteriver Service Unit (WRSU) is an IHS facility located on the Fort Apache Reservation, which spans over 1.6 million acres in Northeastern Arizona [7]. WRSU encompasses two The Joint Commission (TJC) facilities, Whiteriver Indian Hospital and Cibecue Health Center. WRSU serves a patient population over 20,000 people, accounting for 40,000 emergency rooms visits and 120,000 outpatient visits annually. Whiteriver Indian Hospital is a 40-bed facility offering outpatient, urgent care, emergency care, optometry, dental, pharmacy, and outreach services. The hospital is staffed by 22 physicians, five nurse practitioners, five dentists, two optometrists, 33 pharmacists, 15 pharmacy technicians, and over 80 nursing staff members. Cibecue Health Center offers outpatient, urgent care, optometry and dental services and is staffed by two physicians, one pharmacist, one pharmacy technician and five nursing staff members.
The Government Performance and Results Act (GPRA) requires federal agencies, including IHS, to measure their performance and effectiveness in improving patient care based on specific standards [8]. GPRA standard measures related to immunizations include ensuring children receive recommended immunizations by three years of age. The recommended child and adolescent immunization schedule is shown in Figure 1 [9]. GPRA measures for childhood immunizations at WRSU have historically been well below the national goal and federal average. WRSU immunization rates also fell below the U.S. vaccination coverage rates for Caucasian children in the age range 19–35 months by almost 30% [10]. As part of an effort to achieve GPRA standards, the pharmacist-in-charge (PIC) at WRSU chose to implement immunization-trained pharmacy technicians as a part of the pharmacy personnel.
Pharmacy technicians have been shown to be a successful addition to the immunization neighborhood. In 2016, faculty from the Washington State University College of Pharmacy and Pharmaceutical Sciences (WSU) developed the first immunization administration training program specifically for pharmacy technicians [11]. A study by McKeirnan and colleagues in 2018 demonstrated that immunizing pharmacy technicians (IPTs) can be trained to be confident and comfortable administering immunizations after participating in a 4-hour training program [12]. During this study, 25 IPTs administered more than 950 immunizations without incident [12]. In 2019, Bertsch and colleagues stated that pharmacists who supervise IPTs believed the technicians were well trained after participating in the WSU Pharmacy Technician Immunization Training Program, having immunizing technicians increased the number of immunizations administered at the pharmacy, and that training technicians to perform this advanced role had a positive impact on pharmacy morale [13]. Additionally, participating pharmacists believed including an immunization-trained pharmacy technician on the pharmacy team improved workflow and stated they would support immunization training for additional pharmacy technicians [14].

Between July 1, 2018 to June 30, 2019, seven immunizing pharmacy technicians administered 4852 immunizations with 4394 individual injections to underserved patients. These immunizations included a spectrum of vaccines and patient ages, from routine pediatric immunizations for children less than one year old to zoster and pneumococcal vaccines for older adults. Including pharmacy technicians in the immunization neighborhood has the potential to drastically increase the number of immunizers in the United States, and reduce the number of deaths from vaccine-preventable diseases. 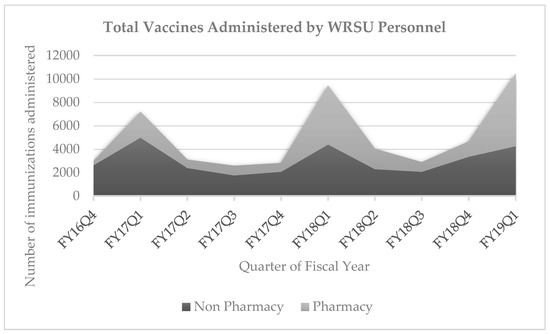