Morphosyntactic Development in First Generation Arabic—English Children: The Effect of Cognitive, Age, and Input Factors over Time and across Languages

The inclusion of European minority languages in public spaces such as education, administration and the media has led to the emergence of a new profile of speakers, “new speakers”, who typically acquire a minority language through education, but vary in terms of their language experience and use. The present study investigated whether a distinctive variety spoken by Galician new speakers (neofalantes) has emerged in the community and whether listeners’ language background influences accent identification abilities and patterns. Galician-Spanish bilingual listeners completed an accent identification task and were asked to comment on factors influencing their decision. Results demonstrated that all listeners could identify Galician-dominant better than Spanish-dominant bilinguals but could not identify neofalantes. Neofalantes were categorised as both Spanish- and Galician-dominant, supporting the idea that neofalantes have a hybrid variety. This finding suggests that listeners have a gradient representation of language background variation, with Galician-like and Spanish-like accents functioning as anchors and the neofalantes’ accent situated somewhere in the middle. Identification accuracy was similar for all listeners but neofalantes showed heightened sensitivity to the Galician-dominant variety, suggesting that evaluation of sociophonetic features depends on the listener’s language and social background. These findings contribute to our understanding of sociolinguistic awareness in bilingual contexts. View Full-Text
Keywords: new speakers; accent identification; sociolinguistic awareness; bilingual speech processing; Galician phonetics; minority languages new speakers; accent identification; sociolinguistic awareness; bilingual speech processing; Galician phonetics; minority languages
►▼ Show Figures 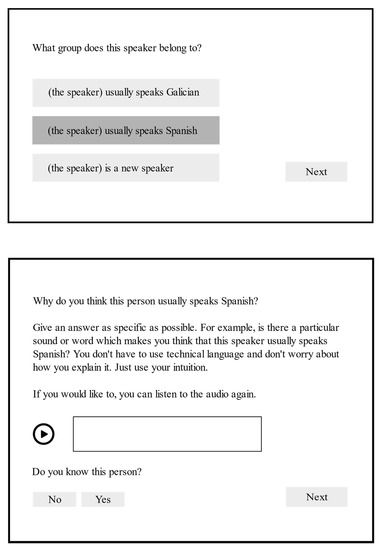 Gisela Tomé Lourido
Dr Gisela Tomé Lourido is a Lecturer in Sociophonetics in the area of Linguistics and Phonetics at the University of Leeds. Before joining the University of Leeds, she completed an MA in Phonetics and a PhD in Speech, Hearing and Phonetic Sciences at UCL. Her research focuses on the role of accent variation in speech perception and production in bilingual and monolingual populations. Her current projects use eye-tracking and other behavioural methods to investigate how we process different accents. Her work has been published in high-impact journals such as Bilingualism: Language and Cognition, Journal of Phonetics and Phonetica.

Bronwen G. Evans
Dr Bronwen Evans is Associate Professor in the Department of Speech, Hearing and Phonetic Sciences at UCL, where she also completed her PhD. Her research combines approaches from sociophonetics & behavioural psychology to understand variation in production and perception in monolingual and bilingual populations, as well as how awareness of accent variation develops over the lifespan. She has collaborated on projects funded by the UK, German & Australian Research Councils and her work is regularly published in high-impact journals such as the Journal of the Acoustical Society of America, Child Development, Bilingualism: Language and Cognition & Journal of Phonetics.
Zoom | Orient | As Lines | As Sticks | As Cartoon | As Surface | Previous Scene | Next Scene
We use cookies on our website to ensure you get the best experience. Read more about our cookies here.
Accept
We have just recently launched a new version of our website. Help us to further improve by taking part in this short 5 minute survey here. here.
Never show this again