Acknowledgement to Reviewers of Languages in 2019

Headedness and the Lexicon: The Case of Verb-to-Noun Ratios

This paper takes a well-known observation as its starting point, that is, languages vary with respect to headedness, with the standard head-initial and head-final types well attested. Is there a connection between headedness and the size of a lexical class? Although this question seems quite straightforward, there are formidable methodological and theoretical challenges in addressing it. Building on initial results by several researchers, we refine our methodology and consider the proportion of nouns to simplex verbs (as opposed to light verb constructions) in a varied sample of 33 languages to evaluate the connection between headedness and the size of a lexical class. We demonstrate a robust correlation between this proportion and headedness. While the proportion of nouns in a lexicon is relatively stable, head-final/object-verb (OV)-type languages (e.g., Japanese or Hungarian) have a relatively small number of simplex verbs, whereas head-initial/verb-initial languages (e.g., Irish or Zapotec) have a considerably larger percentage of such verbs. The difference between the head-final and head-initial type is statistically significant. We, then, consider a subset of languages characterized as subject-verb-object (SVO) and show that this group is not uniform. Those SVO languages that have strong head-initial characteristics (as shown by the order of constituents in a set of phrases and word order alternations) are characterized by a relatively large proportion of lexical verbs. SVO languages that have strong head-final traits (e.g., Mandarin Chinese) pattern with head-final languages, and a small subset of SVO languages are genuinely in the middle (e.g., English, Russian). We offer a tentative explanation for this headedness asymmetry, couched in terms of informativity and parsing principles, and discuss additional evidence in support of our account. All told, the fewer simplex verbs in head-final/OV-type languages is an adaptation in response to their particular pattern of headedness. The object-verb/verb-object (OV/VO) difference with respect to noun/verb ratios also reveals itself in SVO languages; some languages, Chinese and Latin among them, show a strongly OV ratio, whereas others, such as Romance or Bantu, are VO-like in their noun/verb ratios. The proportion of nouns to verbs thus emerges as a new linguistic characteristic that is correlated with headedness. View Full-Text
Keywords: lexical categories; nouns; verbs; syntax; structural head lexical categories; nouns; verbs; syntax; structural head
►▼ Show Figures 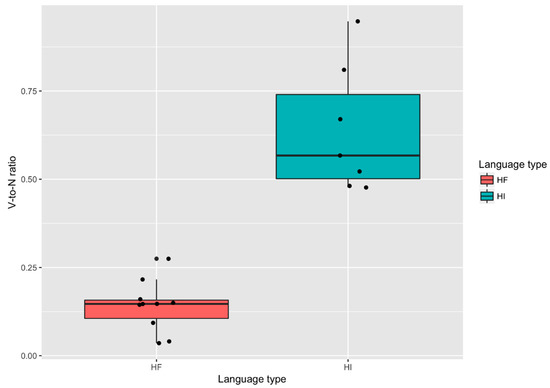