An Exploratory Study of ASL Demonstratives
Previous Article in Journal

Emphasis Harmony in Arabic: A Critical Assessment of Feature-Geometric and Optimality-Theoretic Approaches

This overview article examines vowel-consonant harmony, specifically emphatic harmony (also referred to as pharyngealization, velarization, or uvularization), which is found in Semitic languages. It provides a comprehensive overview of emphasis harmony in Arabic dialects from feature-geometric and optimality-theoretic perspectives. From the feature geometric account, emphatic consonants are considered as a natural class within the guttural group that has the [pharyngeal] or [RTR] ‘retracted tongue root’ feature. This view has been questioned and challenged recently by some researchers who argue for the exclusion of emphatics from the guttural group. The different arguments discussed in this paper show that researchers cannot reach a consensus regarding which consonants belong to the guttural group and which features are shared between these consonants. This paper shows that studies adopting an optimality-theoretic perspective provide a more comprehensive view of emphasis harmony and its fundamental aspects, namely, directional spreading and blocking, spread from secondary emphatic /r/ and labialization. However, this paper reaches two main conclusions. Firstly, unlike feature geometry, optimality theory can provide a clearer picture of emphasis harmony in an accurate and detailed way, which does not only clarify the process in one Arabic dialect but also describe the differences between dialects due to the merit of (re)ranking of constraints. Secondly, emphasis harmony is different from one Arabic dialect to another regarding its direction, involvement of emphatic /r/, and labialization. These differences between dialects indicate that emphasis harmony is not an absolute phenomenon. View Full-Text
Keywords: autosegmental phonology; emphasis spread; gutturals; pharyngealization; optimality theory; Semitic languages autosegmental phonology; emphasis spread; gutturals; pharyngealization; optimality theory; Semitic languages
►▼ Show Figures 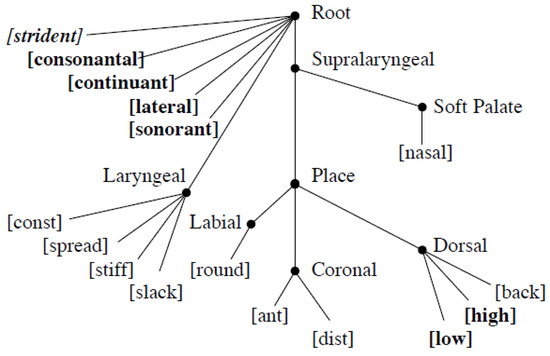