Recent research found that the languages of bilingual listeners are active and interact, such that both lexical representations are activated by the spoken input with which they are compatible. However, the time course of bilingual activation and whether suprasegmental information further modulates this cross-language competition are still not well understood. This study investigates the effect of stress placement on the processing of English–Spanish cognates by beginner-to-intermediate Spanish-speaking second-language (L2) learners of English and intermediate-to-advanced English-speaking L2 learners of Spanish using the visual-world eye-tracking paradigm. In each trial, participants saw a target (asado, ‘roast’), one of two competitors (stress match: asados, ‘roast (pl)’; stress mismatch: asador, ‘rotisserie’), and two unrelated distracters, while hearing the target word. The experiment included a non-cognate condition (asado-asados-asador) and a cognate condition, where the stress pattern of the English word corresponding to the Spanish competitor in the stress-mismatch condition (inventor) instead matched that of the Spanish target (invento, ‘invent’). Growth-curve analyses revealed cognate-status and stress-mismatch effects for Spanish-speaking L2 learners of English, and cognate-status and stress-mismatch effects, and an interaction for English-speaking L2 learners of Spanish. This suggests that both groups use stress for word recognition, but the English stress pattern only affects the processing of Spanish words in the English-speaking L2 learners of Spanish. View Full-Text
Keywords: bilingualism; bilingual activation; lexical stress; prosody; word recognition bilingualism; bilingual activation; lexical stress; prosody; word recognition
►▼ Show Figures 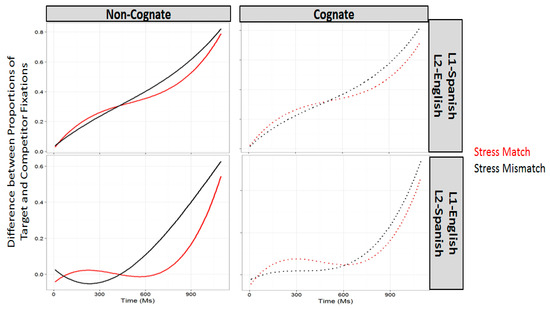