Acoustic radiation emitted by three-dimensional (3D) vortex rings in air has been investigated on the basis of the unsteady Navier–Stokes equations. Power series expansions of the unknown functions with respect to the initial vorticity which is supposed to be small are used. In such a manner the system of the Navier–Stokes equations is reduced to a parabolic system with constant coefficients at high derivatives. The initial value problem is as follows. The vorticity is defined inside a toroid at t = 0. Other gas parameters are assumed to be constant throughout the whole space at t = 0. The solution is expressed by multiple integrals which are evaluated with the aid of the Korobov grids. Density oscillations are analyzed. The results show that the frequency band depends on the initial size of the vortex ring and its helicity. The presented data may be applied to the study of a flow in a wake region behind an aerodynamic body. View Full-Text
Keywords: vortex ring; acoustic radiation; Navier–Stokes equations vortex ring; acoustic radiation; Navier–Stokes equations
►▼ Show Figures 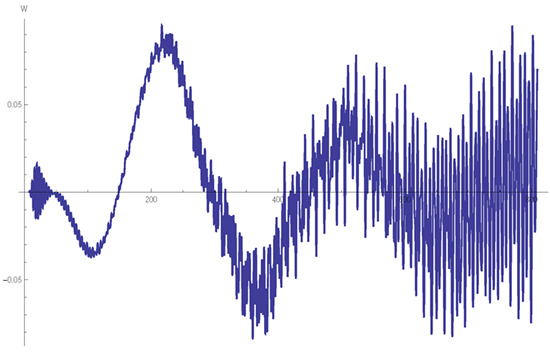