Uncertainty, Complexity and Constraints: How Do We Robustly Assess Biological Responses under a Rapidly Changing Climate?
Previous Article in Journal

The ecology, economy, and cultural heritage of New England is grounded in its seasonal climate, and this seasonality is now changing as the world warms due to human activity. This research uses temperature data from the U.S. Historical Climatology Network (USHCN) to analyze annual and seasonal temperature changes in the New England region of the United States from 1900 to 2020 at the regional and state levels. Results show four broad trends: (1) New England and each of the states (annually and seasonally) have warmed considerably between 1900 and 2020; (2) all of the states and the region as a whole show three general periods of change (warming, cooling, and then warming again); (3) the winter season is experiencing the greatest warming; and (4) the minimum temperatures are generally warming more than the average and maximum temperatures, especially since the 1980s. The average annual temperature (analyzed at the 10-year and the five-year average levels) for every state, and New England as a whole, has increased greater than 1.5 °C from 1900 to 2020. This warming is diminishing the distinctive four-season climate of New England, resulting in changes to the region’s ecology and threatening the rural economies throughout the region.
Keywords: New England; temperature change; USHCN; seasonal analysis; climate change New England; temperature change; USHCN; seasonal analysis; climate change

This research clearly shows that New England is warming faster than the world average temperature change, with every season experiencing a warming trend. Winters are warming the fastest followed by the summer, fall, and spring seasons. In addition to the winters warming the fastest, the minimum temperatures across the region are warming faster than the average and maximum temperatures, except for Rhode Island where the maximum temperatures are warming the fastest. The result of this warming is diminishing New England’s distinctive four-season climate, which will alter the ecology of the region as well as having a negative economic impact, especially for outdoor sports, tourism, and biological natural resource-based economies. The changing climate not only alters the ecology and upends the livelihood of many in New England, it also threatens various infrastructures in New England as well the health and well-being of people through more extreme weather, warmer temperatures, floods and droughts, degradation of air and water quality, expansion of diseases, and sea-level rise.
Based on the data presented here, and the continuing increase of greenhouse gases, it is clear that humanity does not have its hand on the rudder of climate control. It is clear from both the 10-year and five-year analysis that New England’s temperature does not show signs of bending towards equilibrium. The science is clear: we are in a climate crisis and we need to take concerted steps to reduce our production of greenhouse gasses as soon as possible. The temperature changes that are currently happening in New England, as outlined in this paper, threaten to disrupt the seasonality of New England, which will disrupt the ecosystems and the economy of New England.

All data are available in the public domain. Data can be downloaded from the National Centers for Environmental Information (formerly the National Climate Data Center) website (https://www.ncdc.noaa.gov/ushcn/data-access last accessed 6 September 2021). Processed data may be provided upon reasonable request from the authors. GISS data are available from the NASA Goddard Institute for Space Science (https://data.giss.nasa.gov/gistemp/ last accessed 6 September 2021).

We would like to acknowledge NOAA and the National Centers for Environmental Information Data for providing access to the USHCH data set and the NASA Goddard Institute for Space Science for providing the global GISS data. We acknowledge the help of colleagues Marcos Luna and Tara Gallagher from Salem State University. This research was supported by the School of Graduate Studies, the Sustainability and Geography department and the Digital Geography Lab at Salem State University. 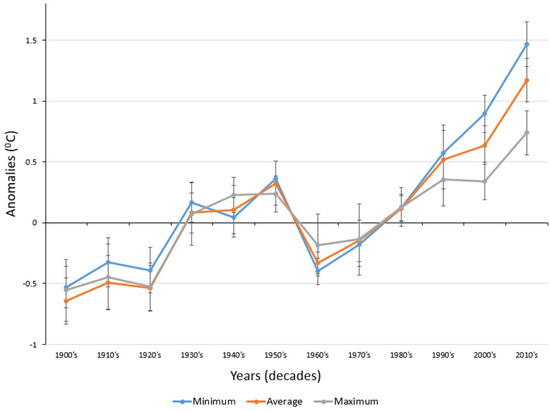 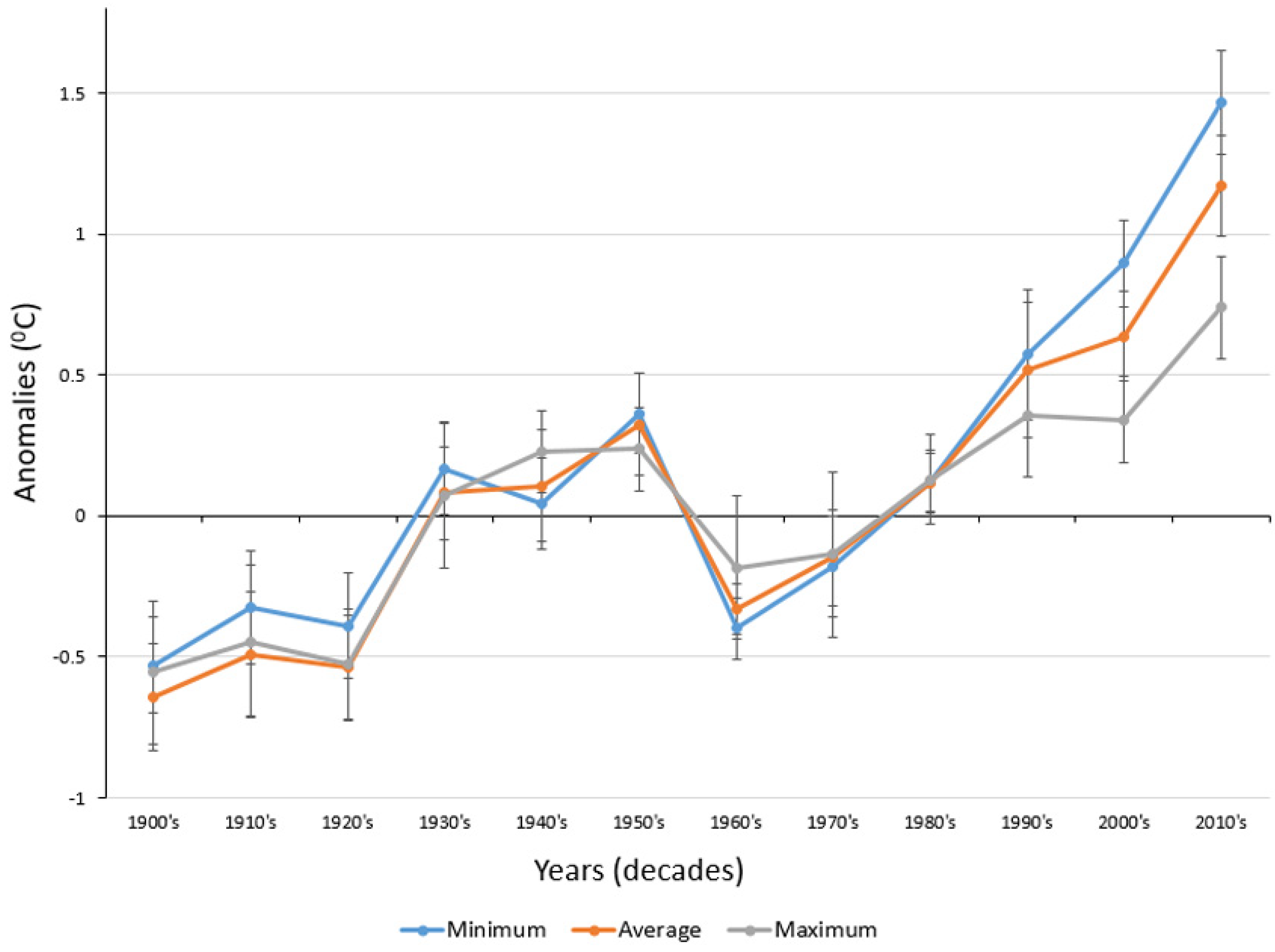 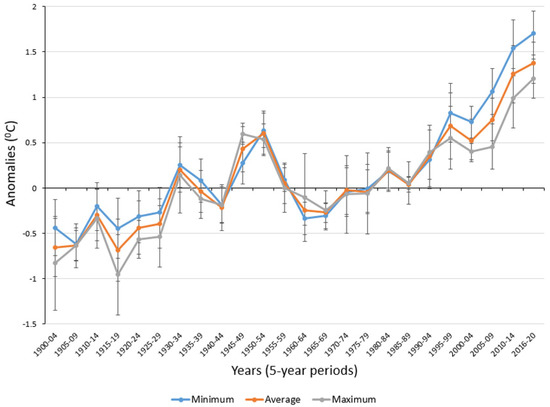 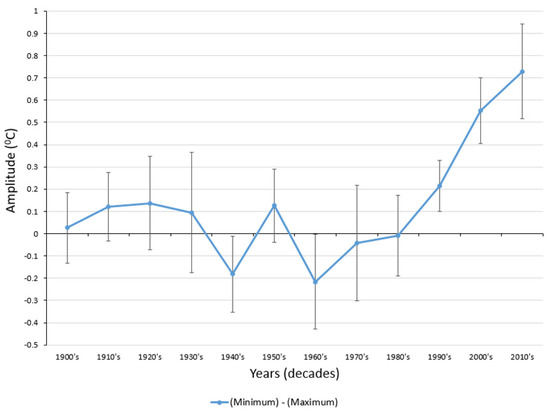 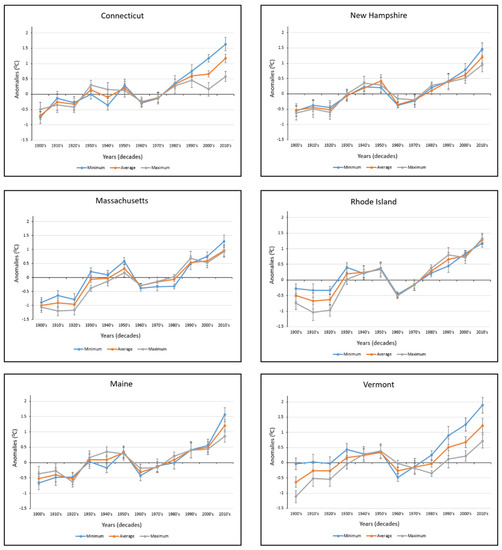 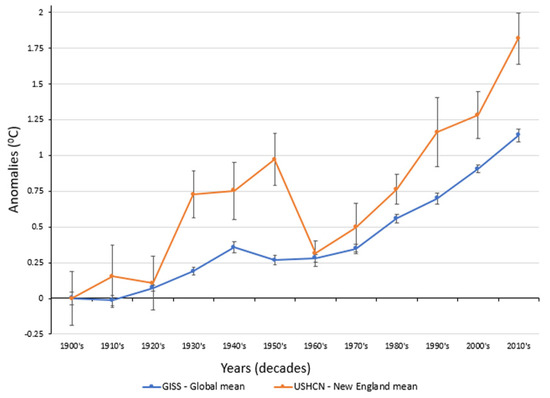