The RainBO Platform for Enhancing Urban Resilience to Floods: An Efficient Tool for Planning and Emergency Phases
Previous Article in Journal

Sierra Leone on the west coast of Africa has a monsoon-type climate. Reports by politically influential donors regularly state that Sierra Leone is extremely vulnerable to climate change, but the objective evidence backing these statements is often unreported. Predicting the future climate depends on modelling the West African monsoon; unfortunately, current models give conflicting results. Instead, changes in rainfall over the last four decades are examined to see if there are already significant changes. Rainfall records are extremely limited, so the Climate Hazards Group InfraRed Precipitation with Station daily data at a spatial resolution of 0.05 degrees was used. In addition to total annual rainfall, the characteristics of the early rainy season (critical for farmers), the length of the rainy season and growing season, and the frequency of extreme events were calculated. There is evidence for a significant reduction in annual rainfall in the northwest. There is only limited support for the widely held belief that the start of the rainy season is becoming more erratic and that extreme events are becoming more common. El-Niño was significant in the southeast. If these trends continue, they will exacerbate the consequences of temperature increases (predicted to be between 1 and 2.6 °C by 2060) and negatively affect the livelihoods and agricultural practices of the rural poor. View Full-Text
Keywords: Sierra Leone; rainfall; climate change; CHIRPS; El Niño; livelihoods Sierra Leone; rainfall; climate change; CHIRPS; El Niño; livelihoods
►▼ Show Figures 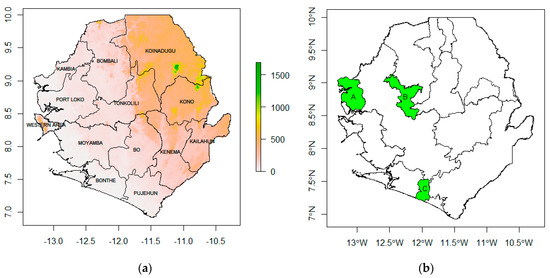