The intensity of precipitation is expected to increase in response to climate change, but the regions where this may occur are unclear. The lack of certainty from climate models warrants an examination of trends in observational records. However, the temporal resolution of records may affect the success of trend detection. Daily observations are often used, but may be too coarse to detect changes. Sub-daily records may improve detection, but their value is not yet quantified. Using daily and hourly records from 24 rain gages in Portland, Oregon (OR), trends in precipitation intensity and volume are examined for the period of 1999–2015. Daily intensity is measured using the Simple Daily Intensity Index, and this method is adapted to measure hourly scale intensity. Kendall’s tau, a non-parametric correlation coefficient, is used for monotonic trend detection. Field significance and tests for spatial autocorrelation using Moran’s Index are used to determine the significance of group hypothesis tests. Results indicate that the hourly data is superior in trend detection when compared with daily data; more trends are detected with hourly scale data at both the 5% and 10% significance levels. Hourly records showed a significant increase in 6 of 12 months, while daily records showed a significant increase in 4 of 12 months at the 10% significance level. At both scales increasing trends were concentrated in spring and summer months, while no winter trends were detected. Volume was shown to be increasing in most months experiencing increased intensity, and is a probable driver of the intensity trends observed.
Keywords: climate; precipitation intensity; hourly precipitation; hydrology; trend analysis climate; precipitation intensity; hourly precipitation; hydrology; trend analysis

Results of the analysis of volume show significant increases meeting field thresholds in 4 of 12 months at both significance levels including March, April, July, and October (Figure 4 and Figure 5). Although increasing volume is found in most seasons, no increases are found in winter months. Volume is seen as a possible driver of intensity trends, since only May and June showed increased intensity but not volume at 10% significance. All of the months that increased in volume also increased in precipitation intensity. It is not clear whether volume more closely couples with one scale of precipitation intensity over the other, because at the 5% significance level volume agrees better with daily intensity and at 10% agrees better with hourly intensity. The number of volume trends identified is roughly similar between months, and the presence of outlier months, like March and October, is missing. As shown in Table 1, Moran’s Index detected no spatial autocorrelation in volume trends, so trend redundancy is not an issue. Overall, the volume results do not at this point correspond to long-term projections by global climate models that regional winters will see increased volume while summers grow drier [30].

3.4. Relationship between Precipitation Intensity, Volume, and Frequency of Wet Days/Hours

As regions confront the challenges of climate change, increased attention to meteorological records can help identify places with increasing vulnerability to extreme weather. However, the robustness of these records may set a threshold on how well trends can be detected, if at all. In order to understand the influence of data resolution on trend detection, precipitation intensity was examined in Portland, OR for the period of 1999–2015 using rain gage records from 24 stations at the hourly and daily resolution. The SDII climate indicator was used to measure daily scale intensity and a similar approach was used to measure hourly scale intensity. Changes in volume were also examined as a possible influencer. Precipitation intensity and volume were calculated as monthly averages and Kendall’s tau was used to test for monotonic trends. Field significance and spatial autocorrelation with Moran’s Index were used to determine monthly group significance. Results indicate that hourly scale records are superior for detecting trends. All significant trends found from both temporal resolutions were positive. These trends were concentrated in spring and summer, similar to other regional studies of precipitation intensity and volume. Most months with increasing precipitation intensity also showed increased volume, so changes to volume remain a possible driver of changes in precipitation intensity. Suppressed precipitation intensity was observed in the daily scale data, as expected, when compared with hourly-scale data.
The increased resolution of the hourly data provides additional insight to intensity trends not available at the daily scale. Further research into the effect of temporal scale on precipitation intensity trend detection is needed to better understand possible limitations of daily data measured at individual weather stations. Complimentary daily/sub-daily datasets such as the Global Precipitation Climatology Project (GPCP) and Tropical Rainfall Measuring Mission (TRMM) records may provide opportunities to further address this issue. As climatologists seek to detect changes to normal precipitation regimes, the influence of data temporal scale is an important consideration in trend detection.

This work was supported by the Urban Resilience to Extremes Sustainability Research Network, NSF grant number AGS-1444755. Additional support was provided by Institute for Sustainable Solutions. We appreciate three anonymous reviewers whose comments greatly improved the clarity of the manuscript. The views expressed are our own and do not necessarily reflect those of sponsoring agencies.

The significant results from Kendall’s Tau tests that were performed are given in Table A1, Table A2 and Table A3. 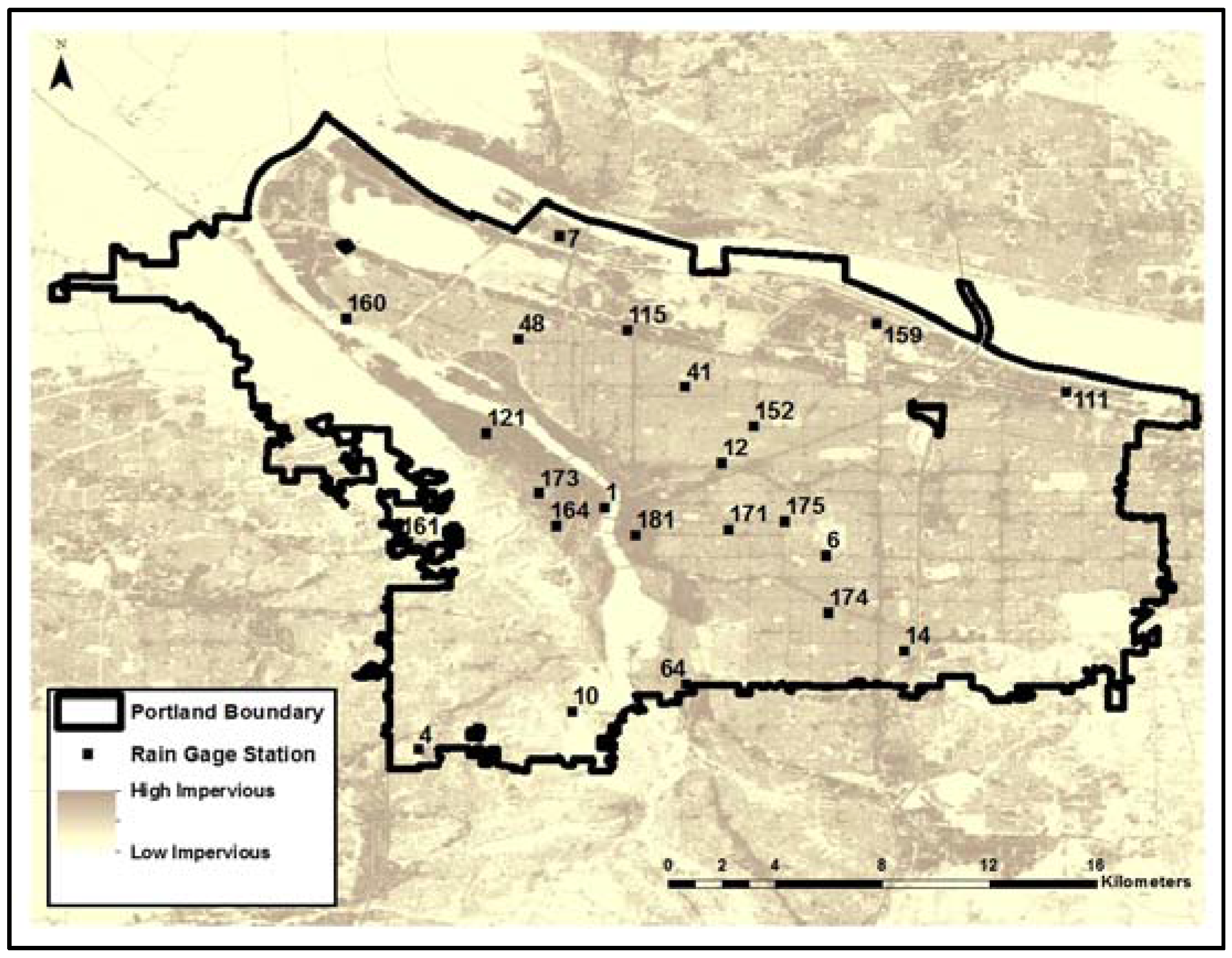 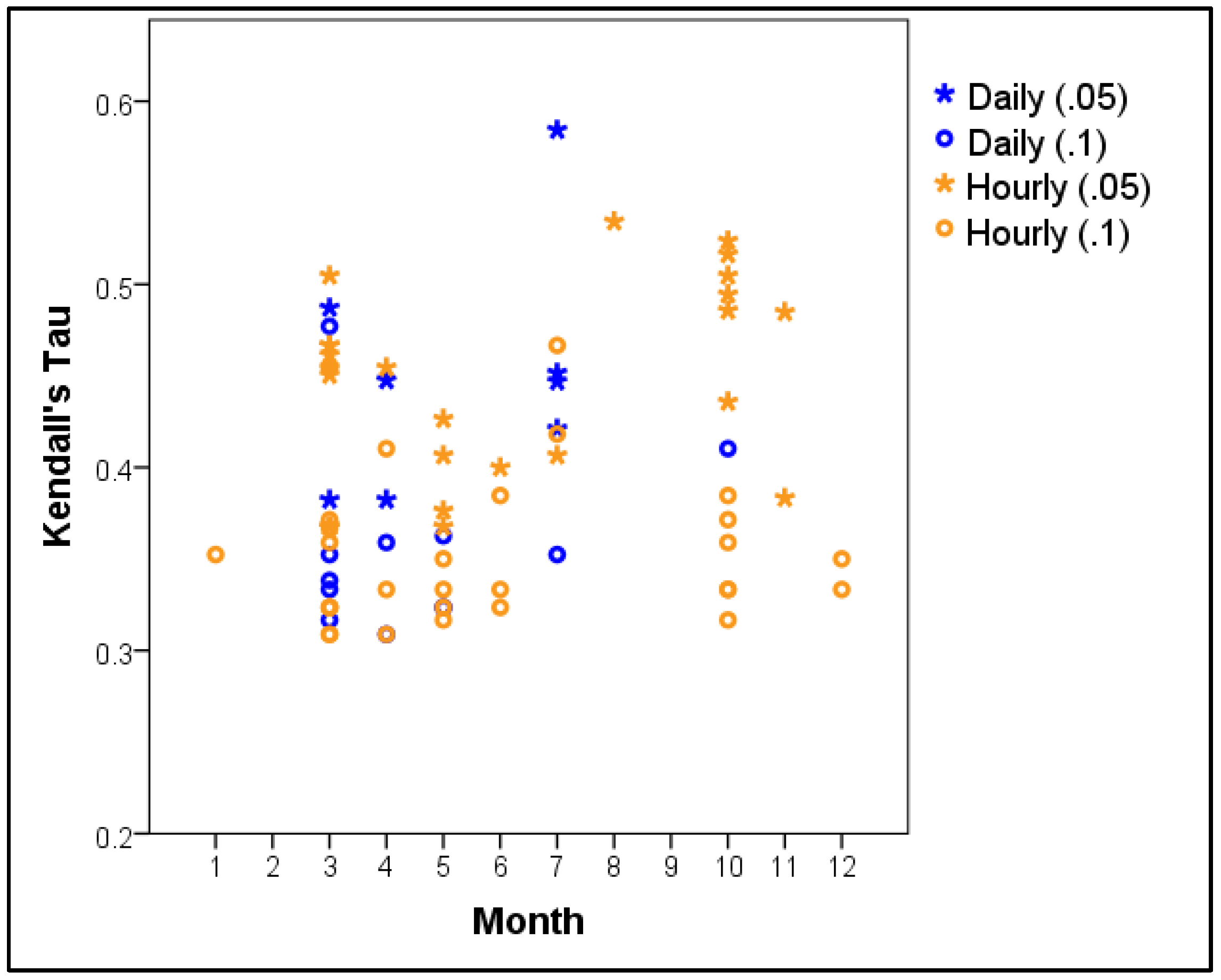 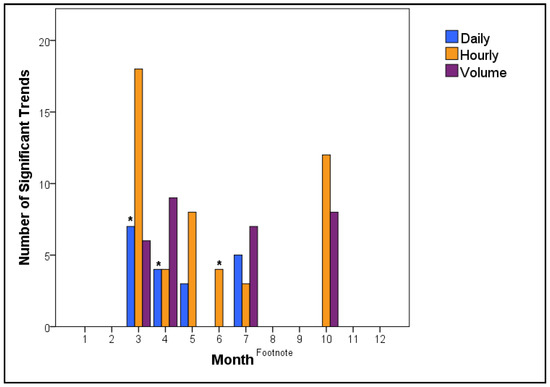 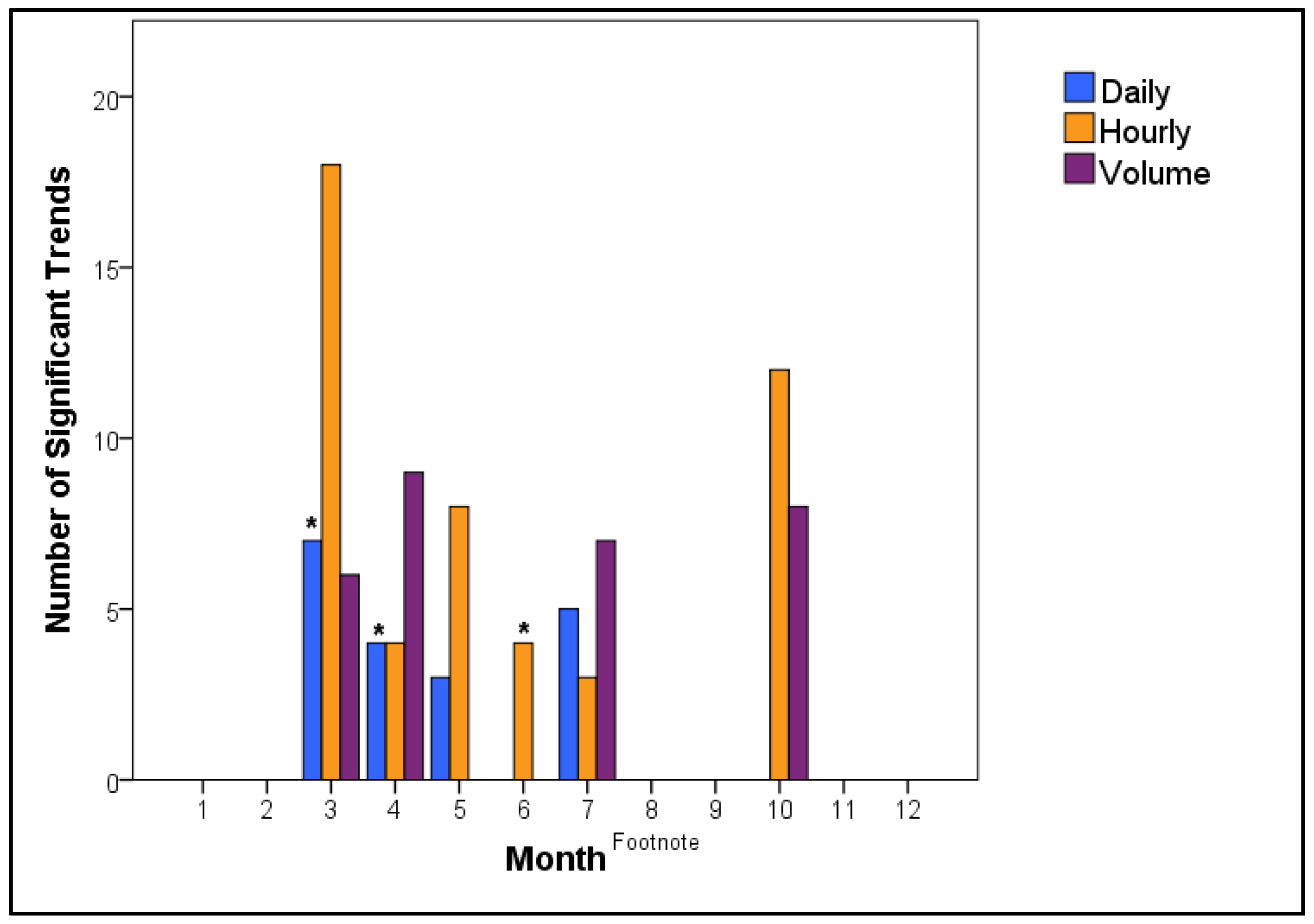 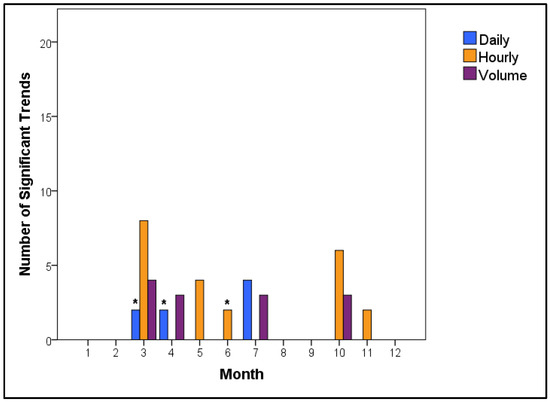 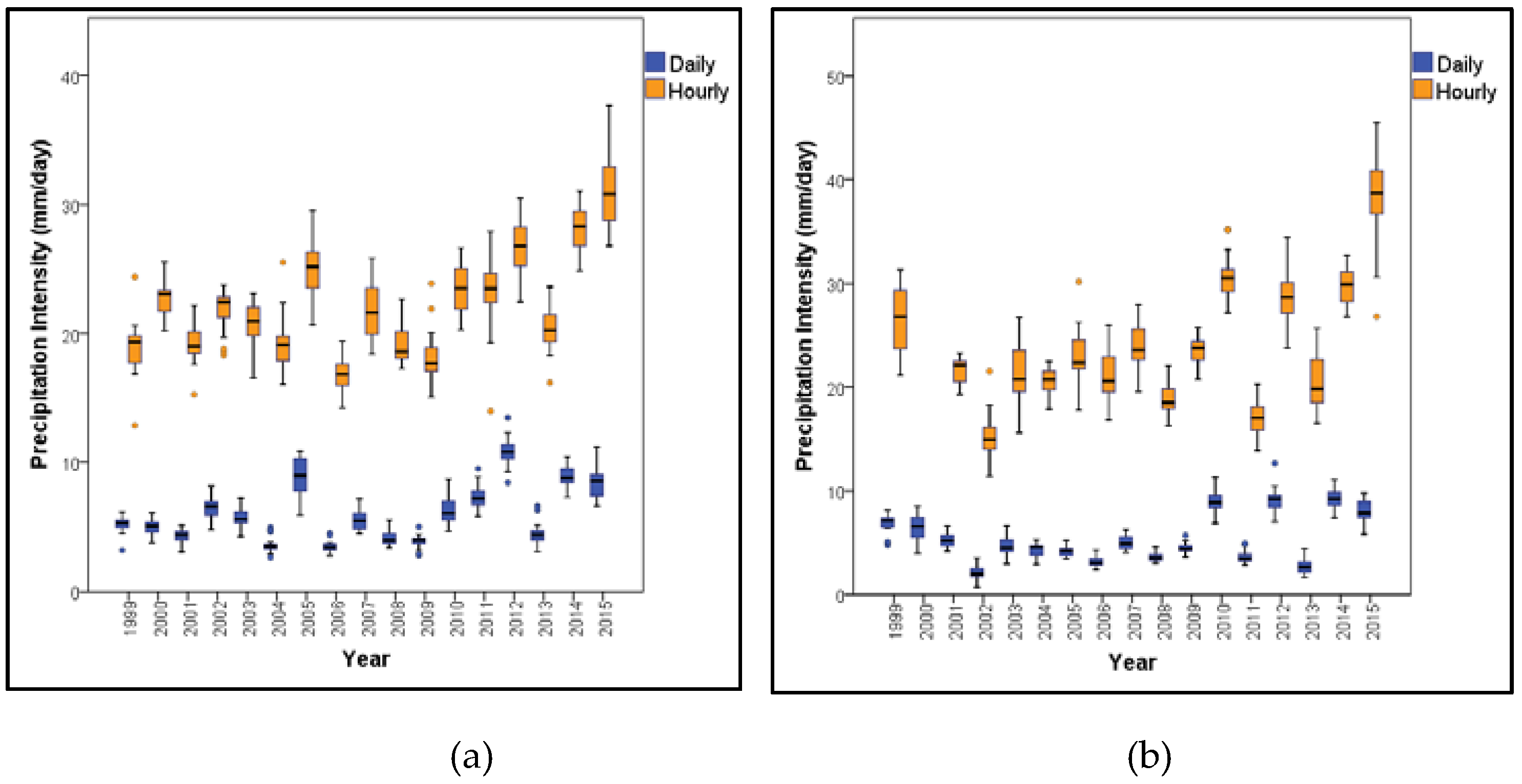 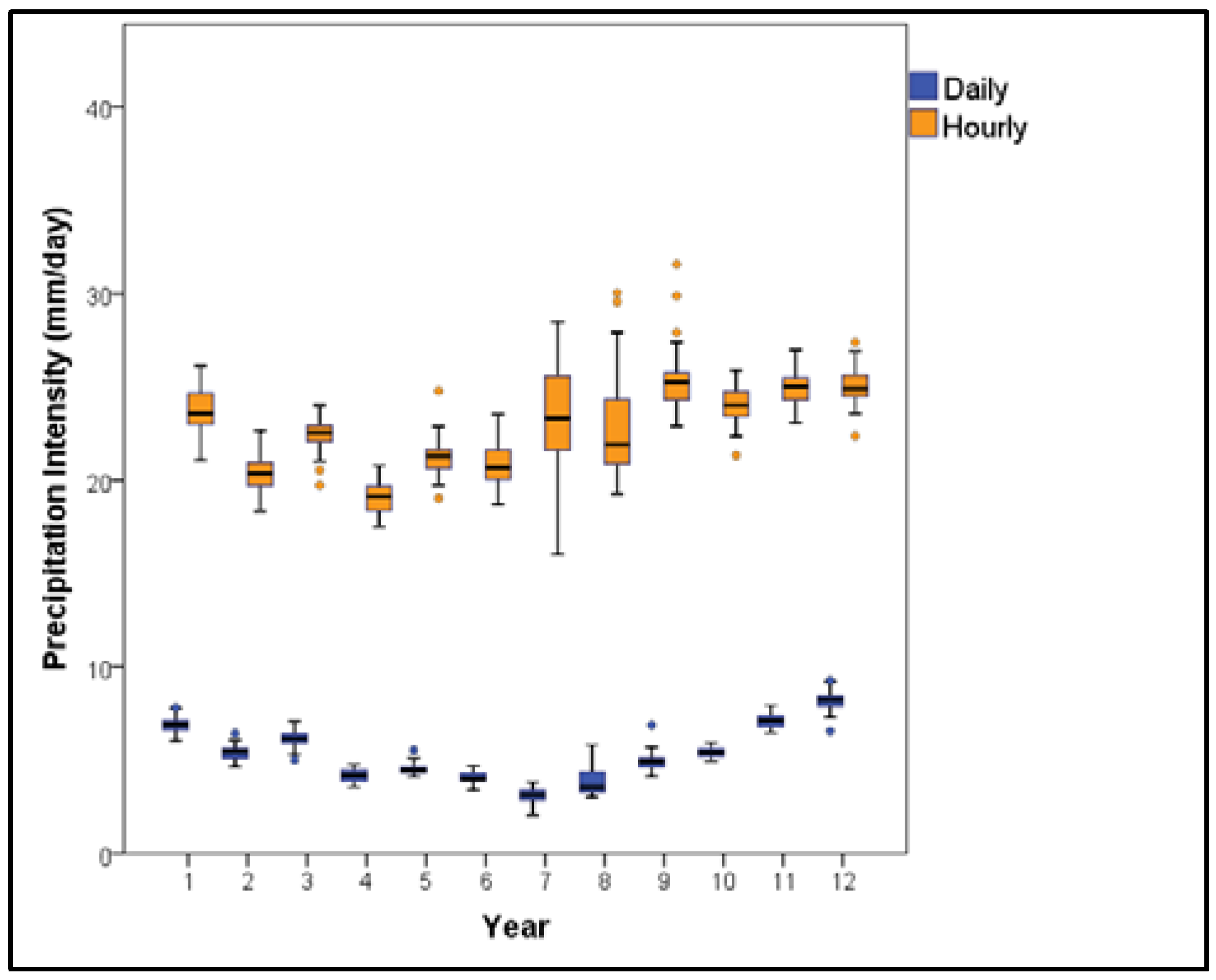 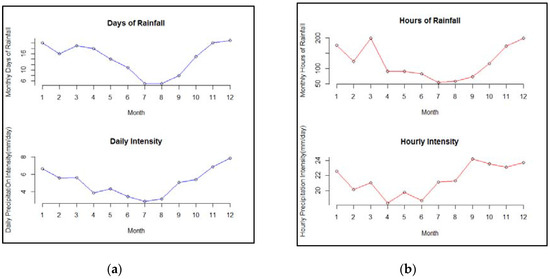 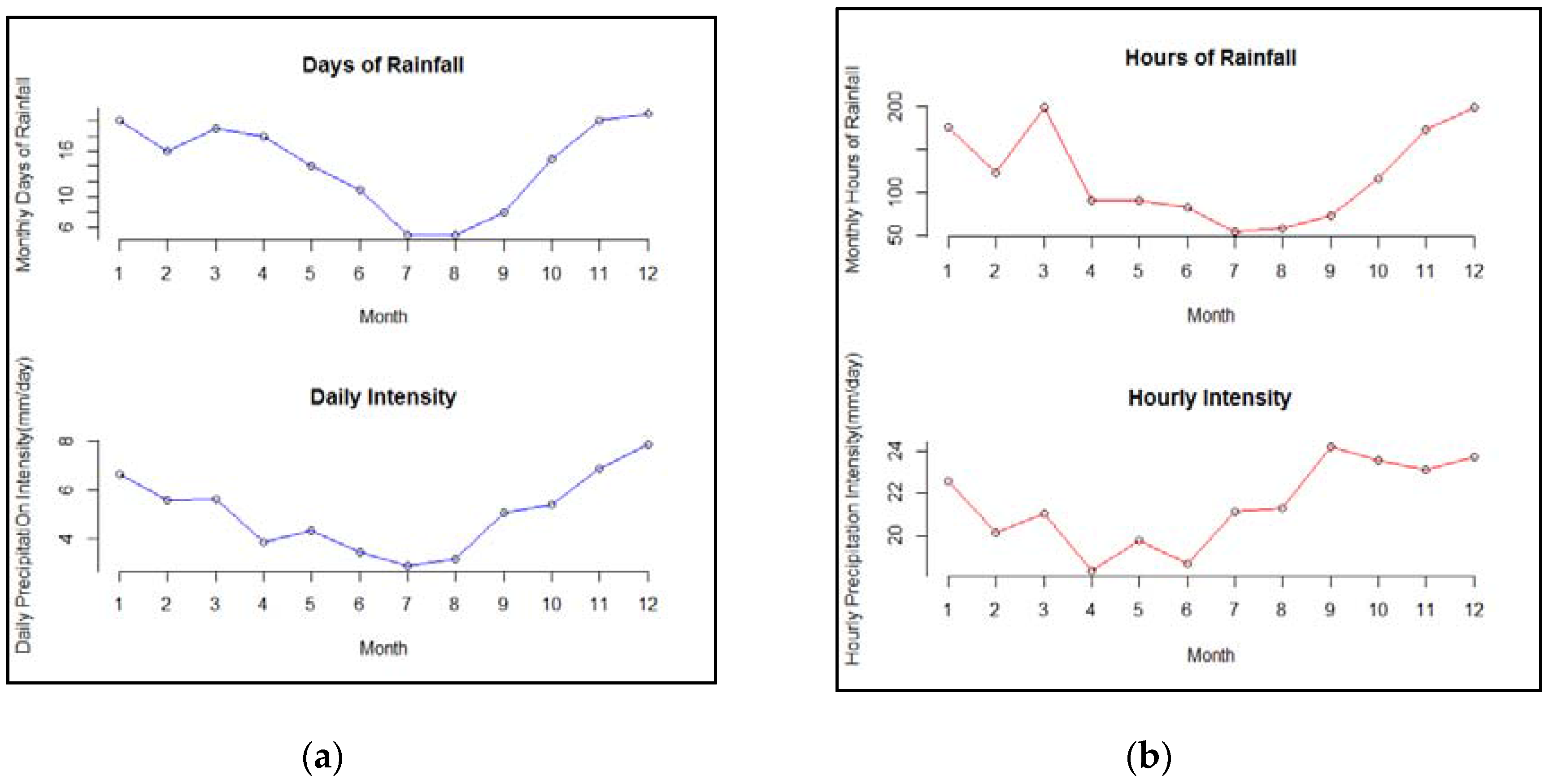