In this paper, we analyze the tornado occurrences in the Unites States. To perform inference procedures for the spatio-temporal point process we adopt a dynamic representation of Log-Gaussian Cox Process. This representation is based on the decomposition of intensity function in components of trend, cycles, and spatial effects. In this model, spatial effects are also represented by a dynamic functional structure, which allows analyzing the possible changes in the spatio-temporal distribution of the occurrence of tornadoes due to possible changes in climate patterns. The model was estimated using Bayesian inference through the Integrated Nested Laplace Approximations. We use data from the Storm Prediction Center’s Severe Weather Database between 1954 and 2018, and the results provided evidence, from new perspectives, that trends in annual tornado occurrences in the United States have remained relatively constant, supporting previously reported findings.
Keywords: Spatial Point Process; Log Gaussian Cox Process; tornado occurrences Spatial Point Process; Log Gaussian Cox Process; tornado occurrences

To model the spatio-temporal distribution of the occurrence of tornadoes, we use the structure of point processes, which is a mathematical way of describing random events distributed in some abstract space. In our application, these point events occur in time as well as space, where the space-time region can be defined as a Cartesian product, , where S is the spatial region defined by the latitude and longitude of the tornado occurrences and T is the time interval of the event occurrence. It is possible to use more complex structures to represent the process, such as the distribution of tornadoes in the terrestrial sphere or other sample intervals, at the cost of greater computational complexity.
An essential structure for modeling point processes is the so-called spatial Poisson process. In this process the number of occurrences in a certain limited region of space is characterized by a Poisson distribution with an intensity parameter . Assuming constant we have a homogeneous Poisson process, which would generate a random but regular distribution of points in space. As this process is very restrictive, a way of making possible a non-homogeneous distribution in space is through a function of deterministic intensity, where we usually assume that the intensity of the process is a deterministic function of a set of fixed and observed covariates in the same space.
This structure is interesting, but it may have several important empirical limitations. It is necessary to have a structure of covariates observed at each point in the space to assess the likelihood of the process. This is an important limitation since for practical purposes we need covariates observed continuously for their use, and in many cases these covariates are not observed or are constructed from methods of interpolation of discrete observations in space. The second limitation is that this structure does not incorporate the possible sources of uncertainty associated with this process, such as measurement errors and omission of relevant variables in the model.
Another extremely important limitation is that the Poisson process is conditionally independent, i.e., conditional on the covariates of the process, the events are independent. This does not allow incorporating processes of spatial (or temporal) dependence generated by latent processes or dependence generated by covariates omitted from the system.
An alternative is to allow the dependency function in a point process to be stochastic, allowing incorporating spatio-temporal dependency processes in the occurrences and other forms of randomness in the process, including structures of random effects. These effects can be structured in such a way as to capture possible spatial and temporal dependency structures in the point process, allowing control for the effects of dependence generated by the omission of relevant covariates, measurement errors and also as an approximation to point processes that are truly dependent outside of the class of Poisson point process.
We use in this work the structure of Log Gaussian Cox Process (LGCP), which are point processes defined by a function of stochastic intensity defined by the class of processes known as Gaussian Markov Random Fields (GMRF) (Rue and Held 2005). This class is defined by a structure of Gaussian latent effects, assuming a Markovian dependence structure which allows the use of efficient methods of computational representation and inference. Below we define the LGCP structure used in our work.

We used in this work a subset of the Storm Prediction Center’s Severe Weather Database file, available at https://www.spc.noaa.gov/wcm/. Although the database covers the 1950–2018 period, we propose to use the 1954–2018 period in order to remove the undercount of tornadoes in the first years, as discussed by Agee and Childs (2014). To facilitate the visualization of the results, we use a yearly aggregation of the daily data. The database also includes damage rating scales, Fujita (F)-prior to 2007- and Enhanced Fujita (EF)-beginning in 2007. Both scales range from 0 (lowest damage indicator) to 5 (highest damage indicator). Table 1 shows some descriptive statistics for the annual counts of tornadoes in each category, and Figure 1 show the number of tornado occurrences reported in each year and each intensity.
In this figure it is possible to observe an increasing in the number of (E)F0 tornadoes after 1990, which can be related to non-meteorological factor Moore (2017). On the other hand, (E)F1 and stronger tornadoes appear to be are stationary. In addition, it is possible to observe a slightly decreasing in the number of (E)F1 and (E)F2 tornadoes after 1974, which can be related to changes in tornado intensity classification adopted by National Weather Service, as discussed by Moore (2017). The occurrences of (E)F5 tornadoes are extremely rare, as can be seen in Table 1, therefore, hereafter we just consider (E)F4 and weaker tornadoes.

Data were taken for different intensities of tornadoes, based on Fujita (F) and Enhanced Fujita (EF) damage rating scales. Historically, stronger tornadoes are less likely to occur, which led to the database having many zero counts. For classifications with very few occurrences, a possible modification is to change the likelihood function to account for the possibility of an excess of zeros. Mixed-distribution models, such as Zero-Inflated-Poisson (ZIP) can be used in such cases. According to Lambert (1992), ZIP is a model for count with excess zeros, which assumes that with probability p the observation is 0, and with probability , a Poisson is observed.
We consider two different types of ZIP models: type 0 and type 1. The type 0 likelihood is defined as where p is a hyperparameter where and is the internal representation of p, meaning that the initial value and prior is given by . On the other hand, the type 1 is defined as where p is a hyperparameter where where has the same meaning above-mentioned. As discussed by Serra et al. (2014), the only difference between type 0 and 1 is the conditioning on for type 0, which means that for type 0 the probability that y is equal 0 is p, whereas for type 1, the same probability is .
Table 4 shows the estimated posterior distribution for the parameters associated with the ZIP model for (E)F4 tornadoes, considering type 1. For space issue we show only the results obtained with type 1, which had best results, in terms of fit, in relation to type 0. The results obtained with type 0 are available with the authors. As in Table 2, the precision parameters represent the variability associated with trend and cycle components. The results indicate great precision associated with the trend component whereas the precision of cycle component is relatively minor.
Figure 11 shows the estimated trend and cycle components for the (E)F4 tornadoes, considering the ZIP model with type 1, where it is possible to observe the absence of permanent changes in the occurrence intensity. In addition, it is important to note that the ZIP model with type 1 results do not present significant changes in the trend and cycle components, relatively to those results obtained with Poisson distribution and shown in Figure 4, Figure 5, Figure 6 and Figure 7.

Climate changes, associated with natural or human activities, can lead to changes in the likelihood of the occurrences of severe weather events, such as heat waves, droughts, tornadoes and hurricanes. The Unites States experiences more tornadoes per year than any other country, which are responsible for deaths and damages. Given the impact of tornadoes on society, understanding how these events are responding to climate changes is important in order to be prepared. Previous studies have searched for relationships between tornado activity and climate changes, for example Lee (2012); Diffenbaugh et al. (2013) and Moore and McGuire (2019).
This present paper contributes to this literature by analyzing tornado occurrences in the United States extending the method proposed by Laurini (2019) using the LGCP representation proposed by Simpson et al. (2016). Therefore, to perform inference procedures for the spatio-temporal point process we adopt a dynamic representation of Log-Gaussian Cox Process. This representation is based on the decomposition of intensity function in components of trend, cycles, and spatial effects. In this model, spatial effects are also represented by a dynamic functional structure, which allows analyzing the possible change in the spatial distribution.
The decomposition proposed in this article is therefore especially useful when analyzing possible changes in the temporal and spatial patterns of the occurrence of events, since it captures changes in the average number of occurrences through the trend component, and changes in the spatial distribution pattern through the time varying spatial random effect. We use daily data from Storm Prediction Center’s Severe Weather Database between 1954 and 2018. The results have provided evidence, from new perspectives, that trends in annual tornado occurrences in the United States have remained relatively constant, supporting previously reported findings.

F.V. and M.L. share equally in all aspects of the paper: Conceptualization; methodology; software; validation; formal analysis; investigation; resources; data curation; writing–original draft preparation; writing–review and editing; visualization; project administration. All authors have read and agreed to the published version of the manuscript.

The authors acknowledge funding from CNPq (306023/2018-0) and FAPESP (2018/04654-9). This study was financed in part by the Coordenação de Aperfeiçoamento de Pessoal de Nível Superior (CAPES)-Finance Code 001 and Instituto Escolhas.

Appendix A. Fitted and Observed Tornadoes without Spatial Component 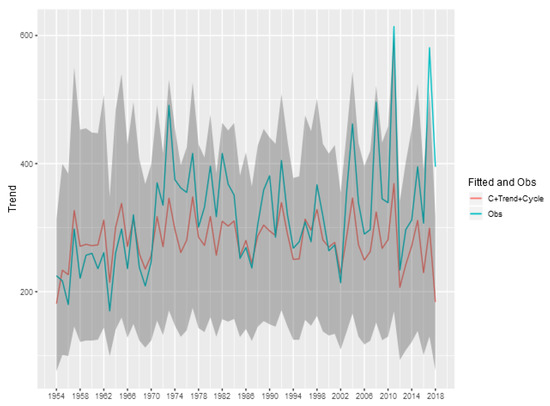 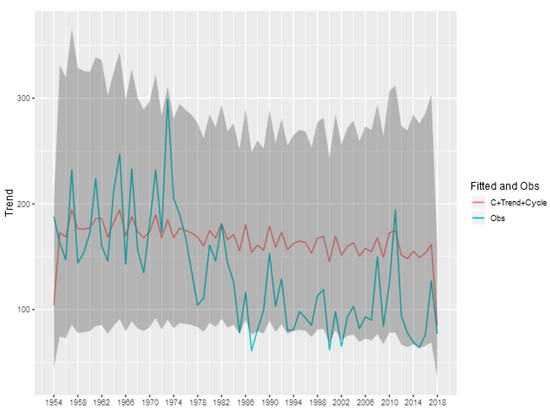 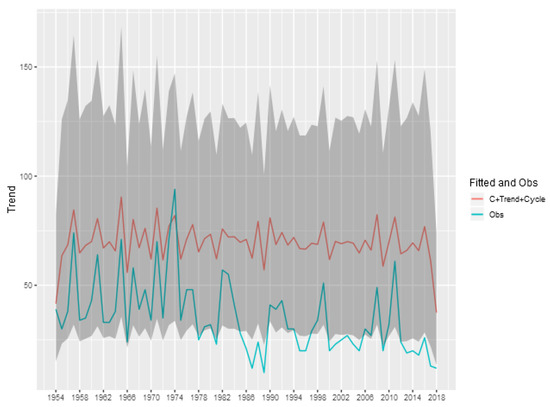 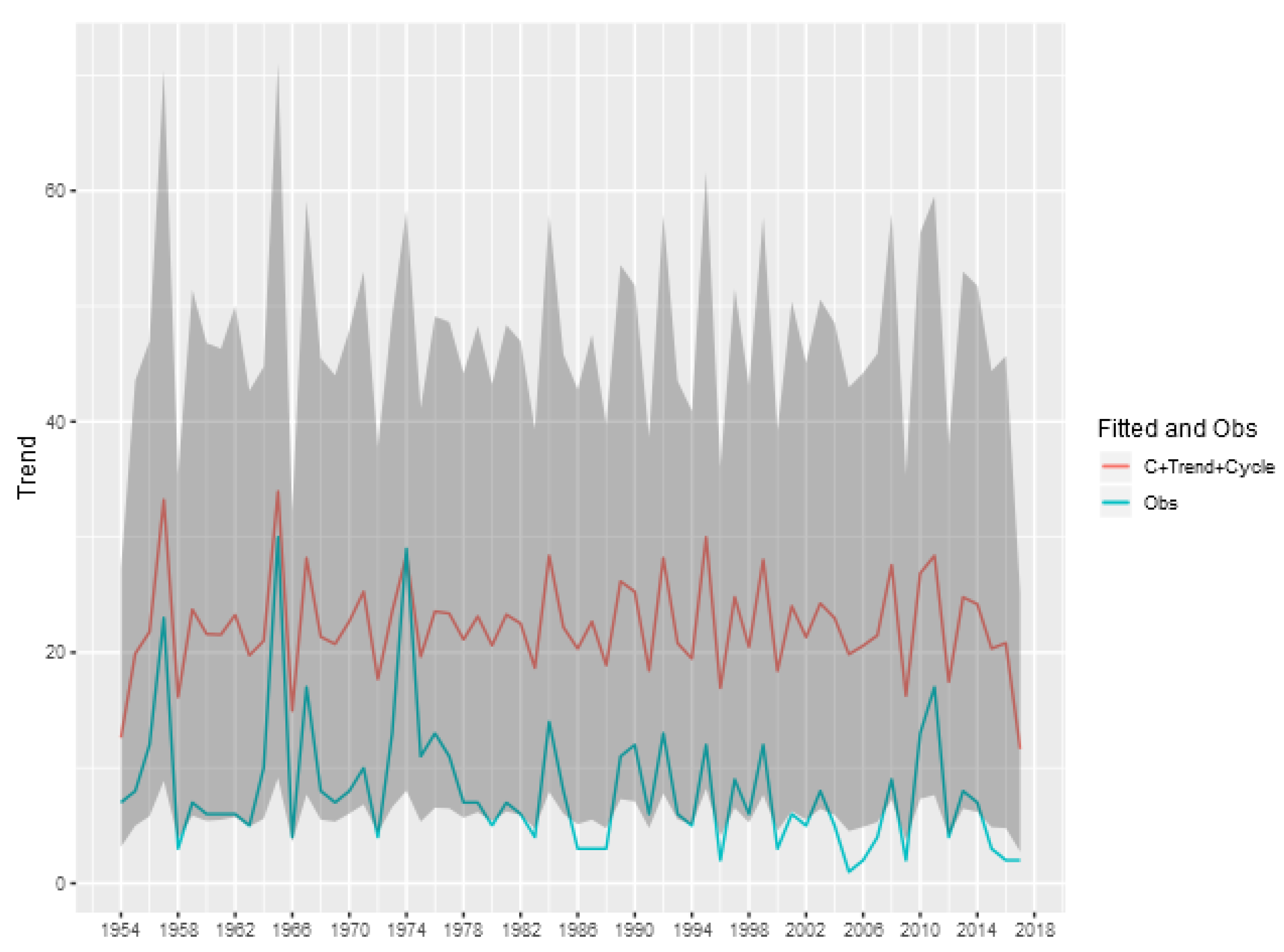 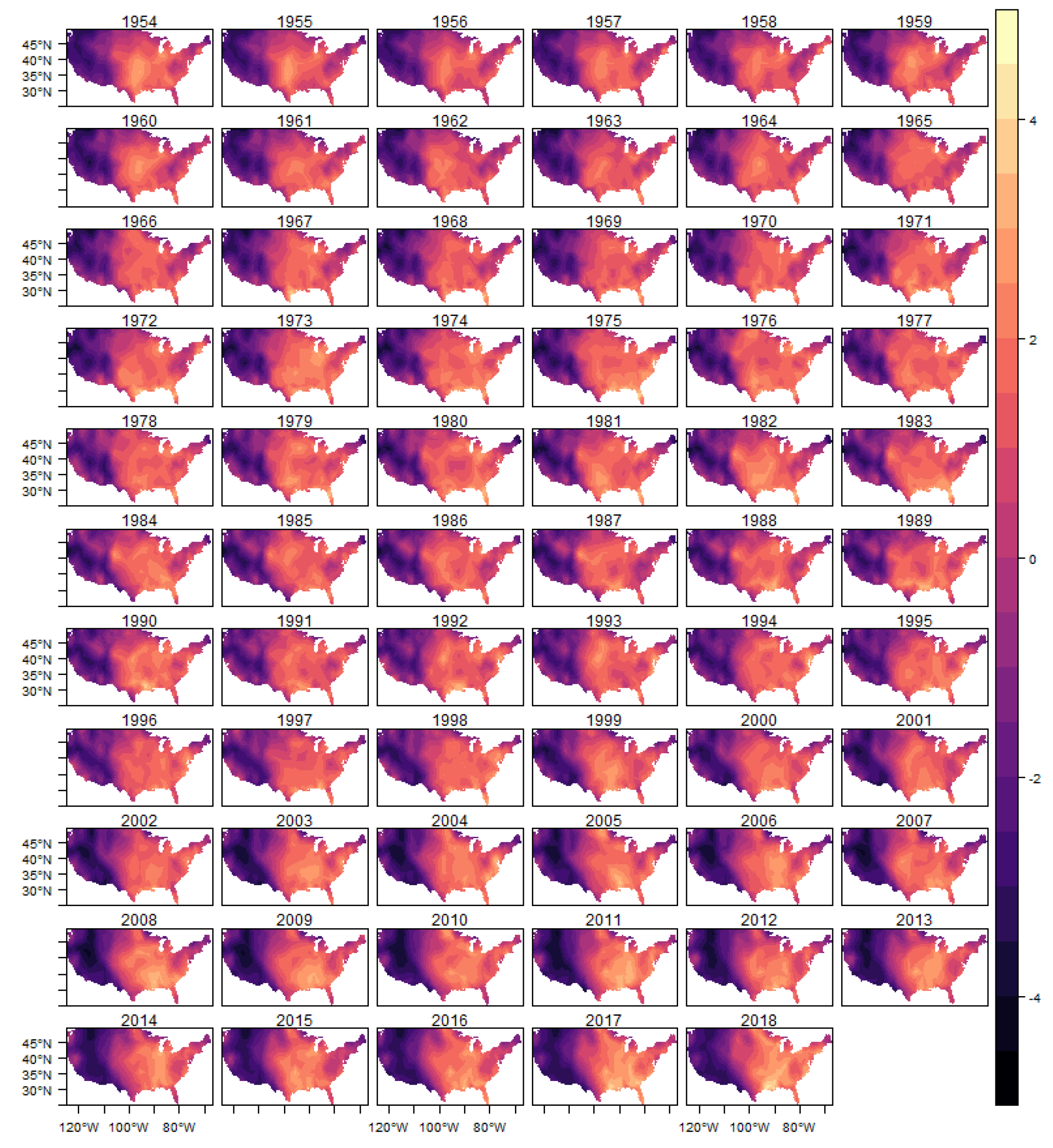 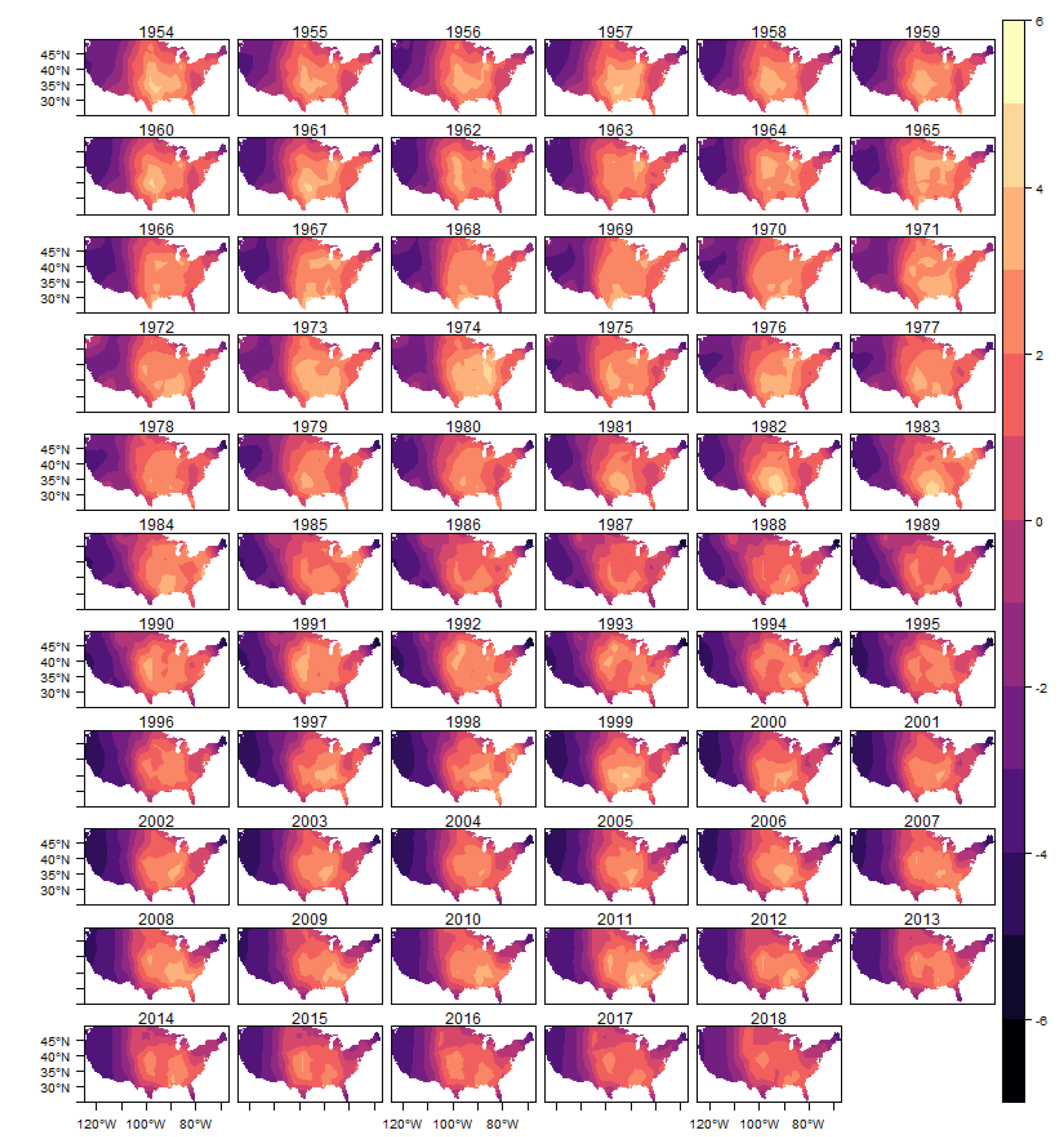 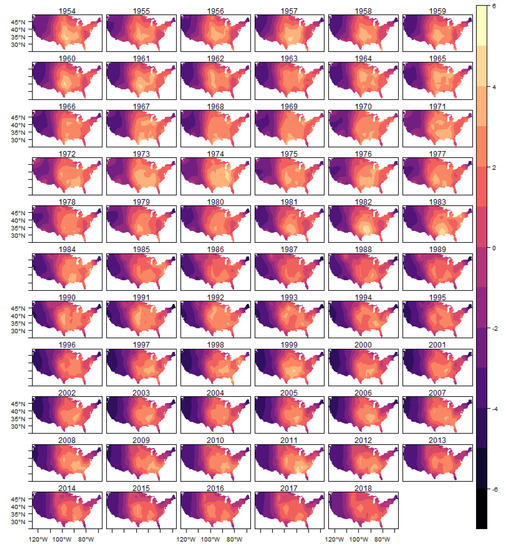 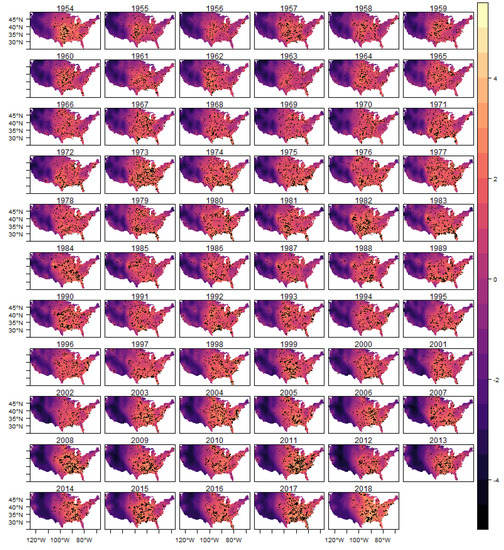 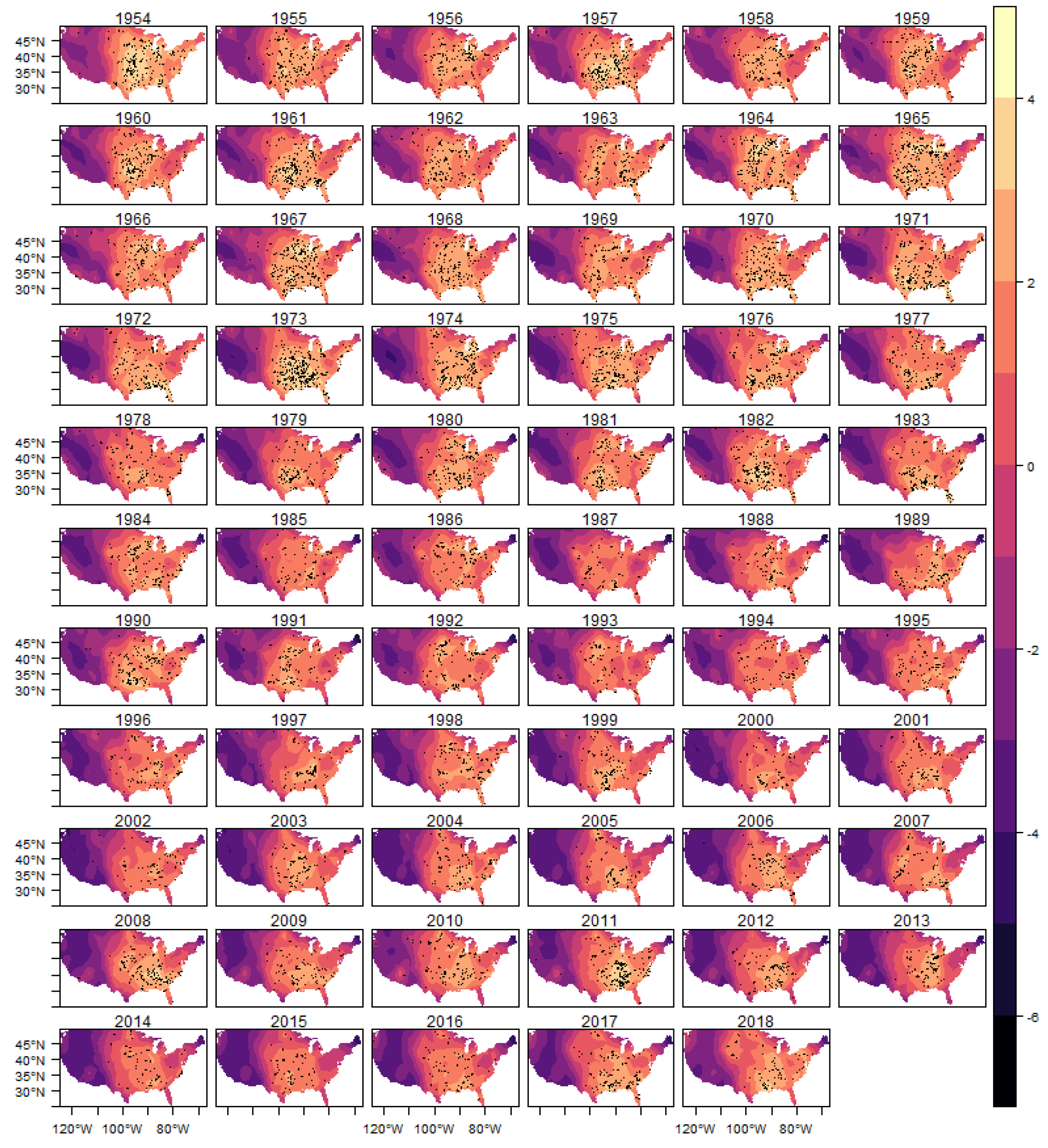 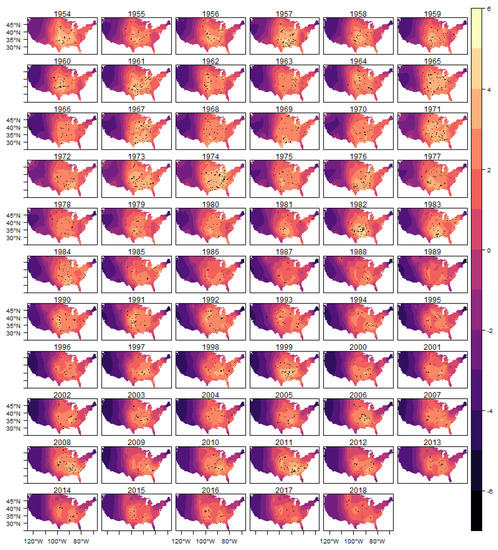 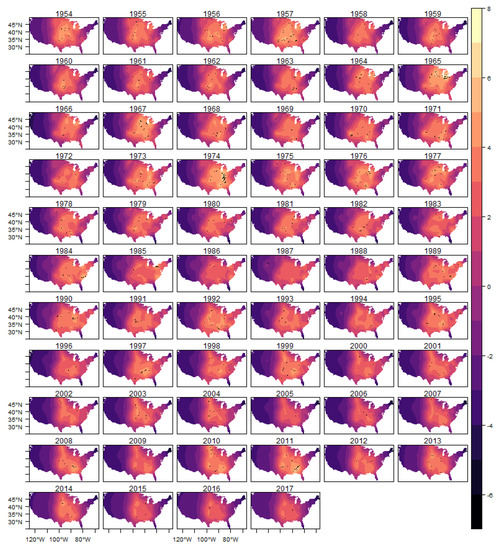 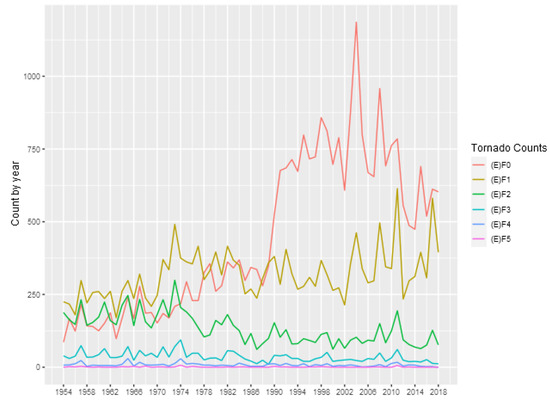 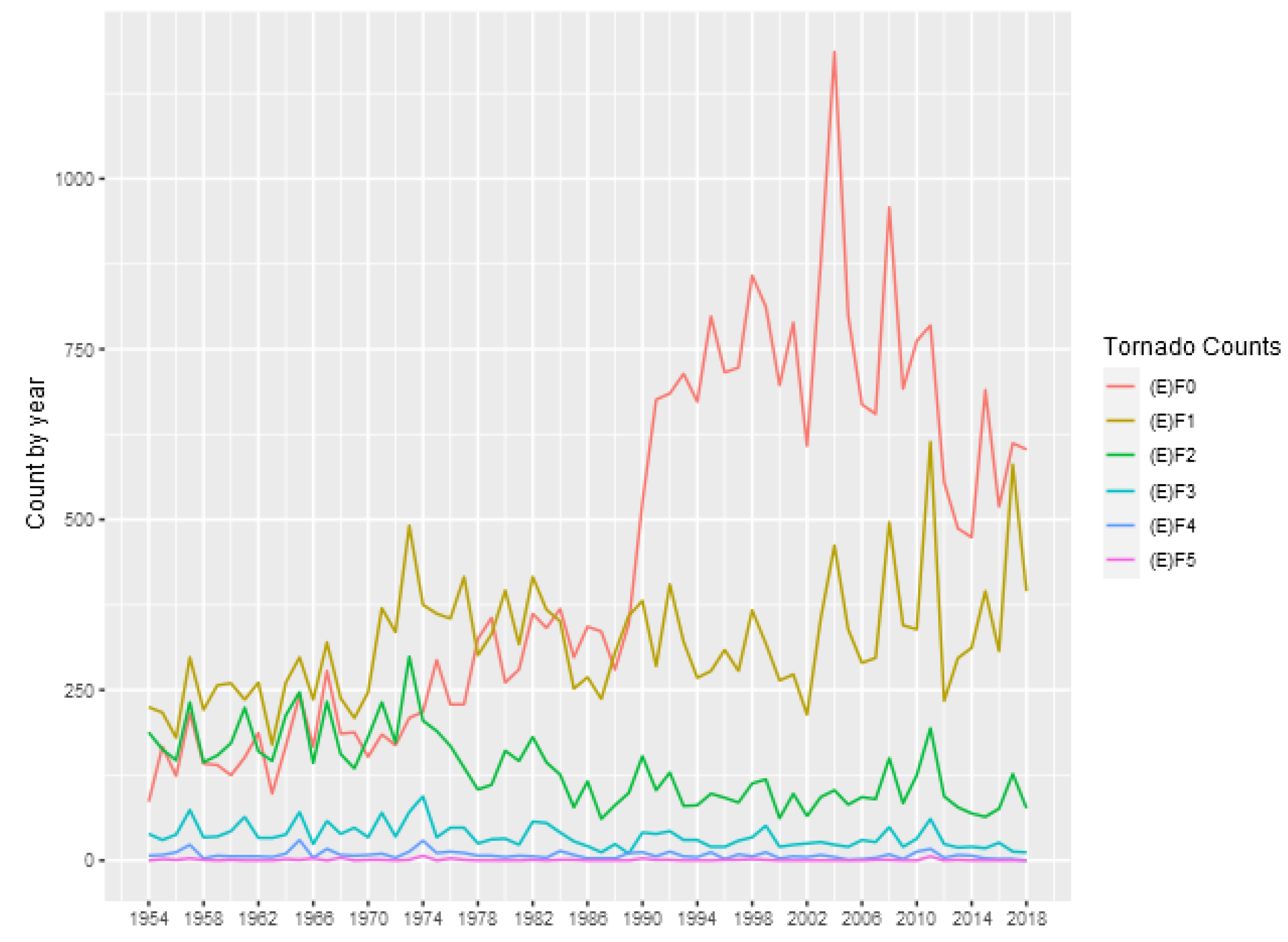 Table 4. Posterior distribution of estimated parameters-ZIP model Type 1.
Table 4. Posterior distribution of estimated parameters-ZIP model Type 1.
© 2020 by the authors. Licensee MDPI, Basel, Switzerland. This article is an open access article distributed under the terms and conditions of the Creative Commons Attribution (CC BY) license (http://creativecommons.org/licenses/by/4.0/).
We use cookies on our website to ensure you get the best experience. Read more about our cookies here.
Accept
We have just recently launched a new version of our website. Help us to further improve by taking part in this short 5 minute survey here. here.
Never show this again