Following Nelson and Plosser’s (1982) seminal study [32], most empirical analyses based on the use of variables measured as time series begin by studying the time properties of the variables. If these are better characterized as being integrated, then researchers use co-integration techniques. If, by contrast, they are stationary, then we can use standard econometric techniques. The study of the Fisher effect is a scenario in which we can clearly appreciate the application of this strategy and, since Mishkin’s (1992) [5] classic study, most of the literature devoted to this issue has followed such an approach.
However, some studies appear to have raised some questions about the appropriateness of the unit root model when seeking to accurately describe the evolution of both inflation rates and nominal interest rates. Malliaropoulos (2000) [14] and Baum et al. (1999) [19] showed that USA nominal interest and inflation rates can be better represented using broken trend stationary models. This finding is very important in the sense that, at least for the USA data, it casts doubts on the adequacy of the co-integration approach to test for the Fisher effect. A common method under this approach is to test whether the real interest rate is integrated. If we can conclude that the real interest rate is not integrated, this will be interpreted as evidence of the Fisher effect. However, this method is only valid when the nominal interest rate and the expected inflation rate are integrated. To better appreciate this, let us consider an expected inflation (π) and a nominal interest rate (R) represented as I(0) variables. Any combination of these variables, say R − β π, will also be an I(0) variable. However, this does not imply that the Fisher effect holds, because it only does so when the parameter β is one. Thus, in the presence of I(0) variables, admitting that the real interest rate is not integrated, does not necessarily imply that the Fisher effect holds.
This finding requires a careful analysis of the time properties of the nominal interest rates and inflation rates, which is precisely the aim of the next subsection.

2.1. Analysis of the Time Properties of the Nominal Interest Rates and Inflation Rates

We have already made the point that an analysis of the time properties of the nominal interest rates and inflation rates should be carried out carefully, and should certainly not be regarded as just a prior step in using co-integration techniques. There is a great range of statistics devoted to this issue. For example, most of the studies related to this area base their analysis on augmented Dickey–Fuller (ADF) tests (Dickey and Fuller (1979) [33]; Said and Dickey (1984) [34]), the methods presented in Phillips and Perron (1988) [20] or subsequent modifications of these types of statistics proposed by Ng and Perron (2001) [35], which compare the performance of a wide range of unit root statistics. For example, these authors consider the ADFGLS, which is based on the very popular ADF test. Following Elliot et al. (1996) [36], this can be obtained by estimating the following model: where reflects the deterministic elements, 2 and subsequently calculating the pseudo t-ratio to test whether the parameter ρ is one. The differences between this and the simple ADF test lie in the fact that ADFGLS is based on the use of GLS (Generalized Least Squares) estimation methods instead of OLS (Ordinary Least Squares) estimators and on determining the value of the lag truncation parameter (ℓ) by using an information criterion, called MIC (Modified Information Criteria), also proposed in Ng and Perron (2001) [35]. This type of statistics is not useful to reject the presence of a unit root in nominal interest rates and inflation. This is why some authors have recently employed different statistics to analyze the time series properties of the variables to take advantage of the cross-sectional information of a database. Thus, it seems suitable to use a panel data approach to test for the presence of a unit root in the variables in the Fisher equation. In order to select the most appropriate type of panel data unit root test, we should first know the characteristics of the database, because of the possible presence of a cross-sectional correlation between the variables.
It is common to begin by testing for the null hypothesis of cross-sectional independence using Pesaran’s (2004) CD (Cross Dependence) statistic [37], which has the following definition: where T is the sample size, N the cross-sectional dimension and is the pair-wise Pearson’s correlation coefficients , , of the residuals obtained from augmented Dickey–Fuller type regression equations. If we cannot reject this null hypothesis, then we should use the CIPS statistics because they correct the distortion caused by the cross-sectional correlation. Following Pesaran (2007) [38], the CIPS (cross-sectionally augmented panel unit root test) statistic is defined as follows: with being the OLS t-ratio to test the Ho: in the following cross-sectional ADF regressions: where denotes the cross-sectional mean of . Tables II(a)–(c) in Pesaran (2007) [38] provide the critical values for the CIPS tests, in addition to a proposed truncated version of this statistic, commonly referred to as CIPS*, which will be used in the following section.

2.2. Empirical Evidence from the G7 Countries

As we mentioned earlier, the methodology to employ to analyze the Fisher effect depends on the time properties of the variables that are necessary to study it, namely the nominal interest rates and inflation rates. Thus, we should be careful when determining the integration order of these variables. To that end, we apply the statistics presented in the previous section to the nominal interest rates and inflation rates of the G7 countries. We take two different measures of the nominal interest rates. First, we select a short-run variable, measured through the three-month treasury bill rate (or equivalent) for each sample country. Second, we take the 10-year government bond (or equivalent) for each sample country as a measure of the long-run behavior of nominal interest rates. We obtain the annualized inflation rates from the Consumer Price Index (CPI). We obtain all data from the OECD Main Economic Indicators. Finally, the quarterly data, where possible, cover the sample period 1970:Q1–2015:Q4. 3 Figure 1, Figure 2 and Figure 3 illustrate these variables, whilst Table 1 and Table 2 report the results of applying the previously-mentioned statistics to our database.
Table 1 reflects the results of the CD statistic to test the null hypothesis of no cross-sectional dependence. We can easily reject this null hypothesis, and consequently, we should employ panel data unit root tests that account for its presence. The CIPS* statistic, whose results are presented in Table 2, takes into account the cross-sectional dependence. As we can see, there is only very robust evidence against the unit root null hypothesis. However, some countries may exhibit the presence of the unit root in any of the analyzed variables. 4 In order to explore this possibility, we have considered several subgroups of countries. We have taken all of the possible combinations of five and six countries, and the values of the CIPS* statistic always allows the rejection of the null hypothesis, the average p-value being lower than 0.01 Thus, this lack of evidence against the null hypothesis matches the results of Constantini and Lupi (2007) [40] and Lee and Chang (2007, 2008) [41,42], who reject the presence of a unit root in the inflation rate for different sample sizes of OECD countries using the LM (Lagrange Multiplier) tests proposed in Lee and Strazicich (2003, 2013) [43,44], which consider the presence of broken trends in the evolution of these variables. These statistics can also provide evidence against the unit root null hypothesis for the nominal interest rates, as is reflected in Gadea et al. (2009) [45]. Thus, the global consideration of all of this evidence leads us to an analysis of the Fisher effect using I(0) variables instead of the much more common approach of using I(1) variables.

3. Structural Breaks and the Fisher Effect

The authors benefited from the helpful comments made by the Editor and four anonymous referees; this version owes much to them. Financial support from the Ministerio de Ciencia y Tecnología under Grants ECO2014-58991-C3-1-R, ECO2014-58991-C3-2-R and ECO2015-65967-R is gratefully acknowledged. They also acknowledge support from the CASSETEM consolidated research group. The usual disclaimer applies.

The authors contributed equally to this work. 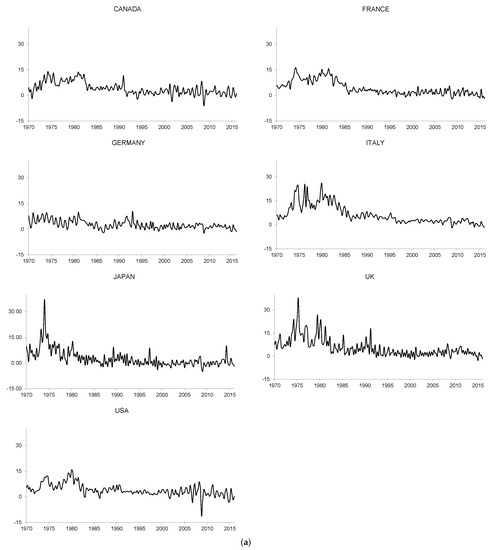 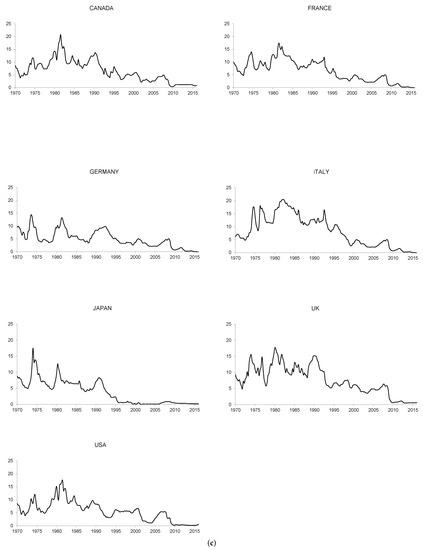 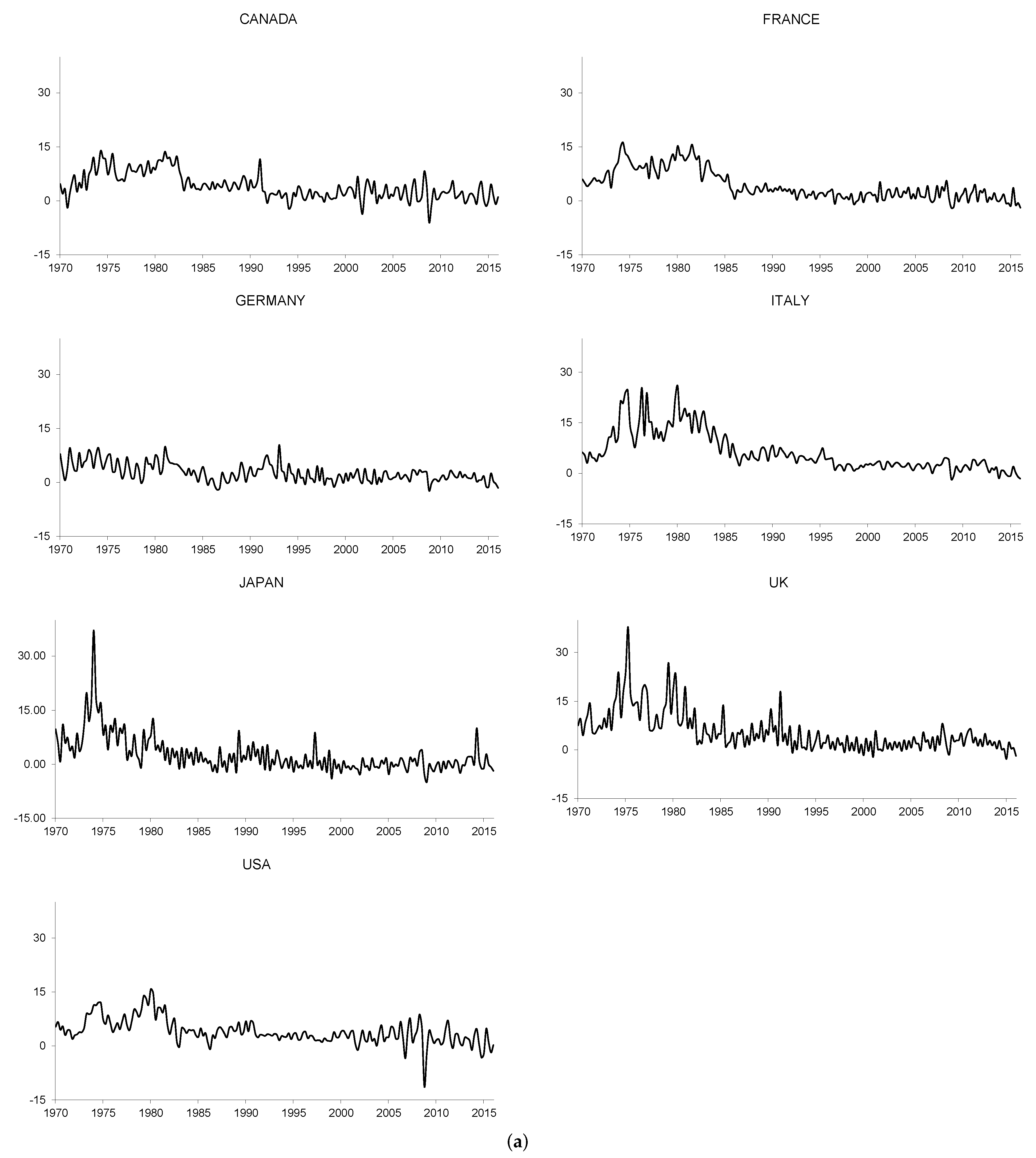 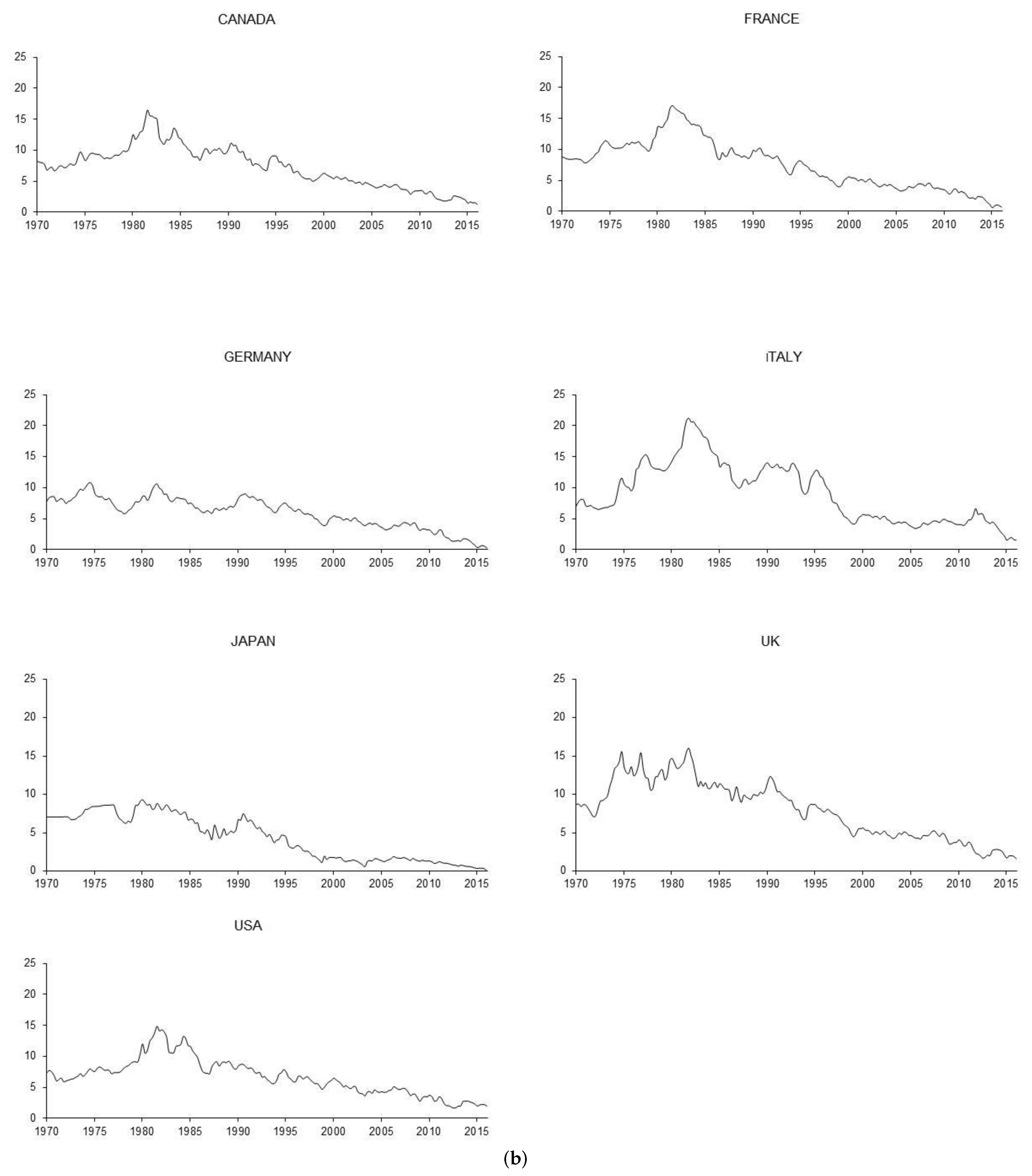 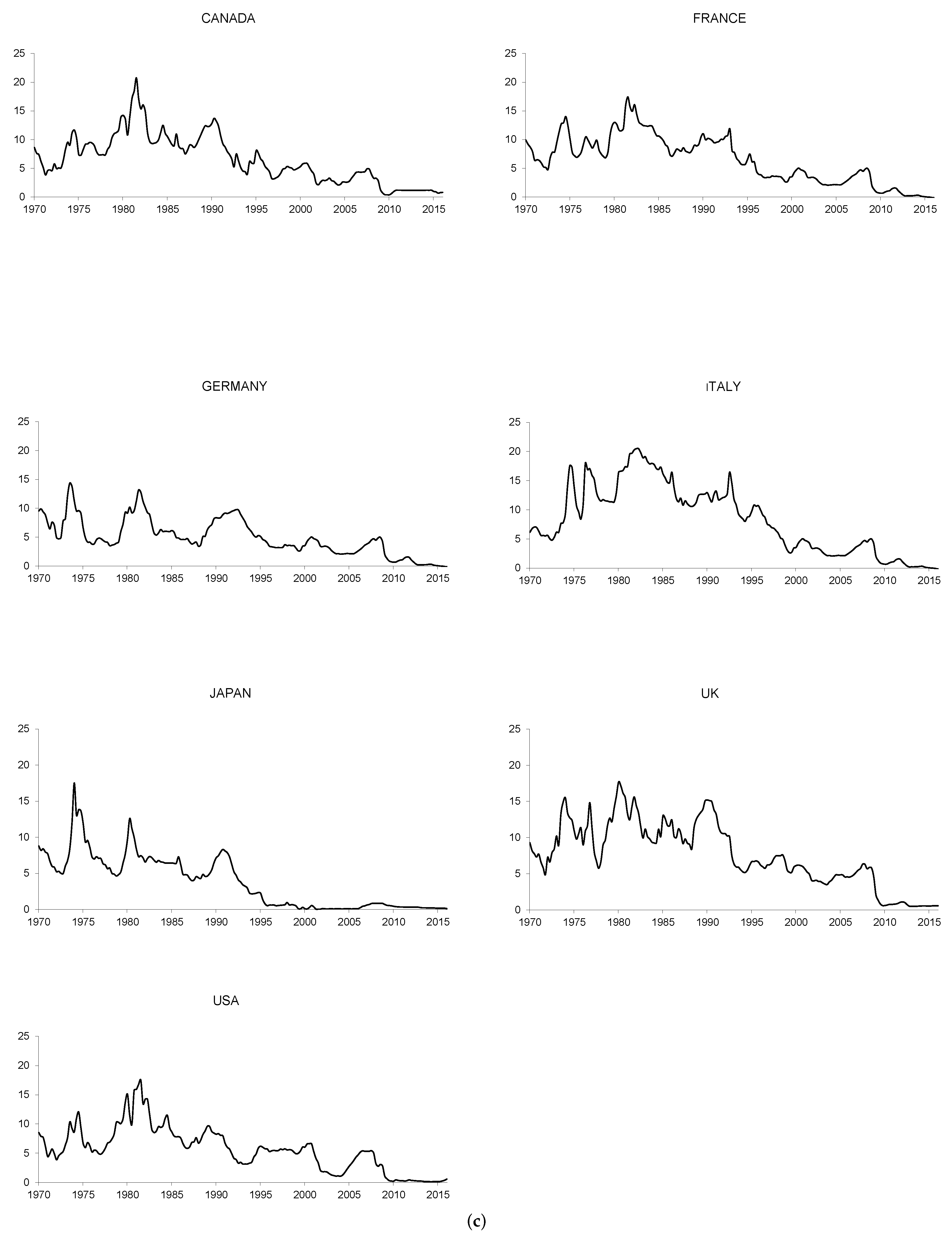 Table 1. Testing for cross-sectional dependence.
This table reports the values of the CD (Cross Dependence) statistic proposed in Pesaran (2004) [37] to test the non-cross-sectional dependence null hypothesis. The values were obtained by estimating a Dickey–Fuller-type equation without trend, with fixed effects and for different lag values (p = 1,..,4). *: rejection of the null hypothesis even for a demanding 1%.

Table 2. CIPS* panel data unit root tests.
This table reports the values of the CIPS* (cross-sectionally augmented panel unit root test, truncated version) statistic proposed in Pesaran (2007) [38] to test the unit root null hypothesis. The values were obtained by estimating (6), where the specification includes only an intercept. ** and *: rejection of the null hypothesis at the 5% and the 1% significance level, respectively.

Table 3. Estimation of the Fisher coefficient.
This table presents the results of the Bai–Perron procedure and the estimation of the Fisher coefficient for the different estimated regimes. ( at 5% significance level) tests for the null hypothesis of no structural breaks, rejecting this hypothesis for any significance level considered. These statistics have been obtained by correcting the possible autocorrelation/heteroscedasticity by way of the quadratic spectral kernel with the bandwidth being selected according to Andrews (1991) [52]. are the estimated break periods according to the LWZ (modified Schwarz criterion) statistic. are the estimations of the Fisher coefficients defined in (8) and (9) for each estimated regime. $ means that a second order ARDL (Autoregressive Distributed Lag) model was estimated.

© 2017 by the authors; licensee MDPI, Basel, Switzerland. This article is an open access article distributed under the terms and conditions of the Creative Commons Attribution (CC BY) license ( http://creativecommons.org/licenses/by/4.0/).