2. Anatomy of the Respiratory System and Abnormality

The main function of the respiratory system is to exchange gases between the blood and air through the respiratory process (inhalation and exhalation). The anatomical structure of the respiratory system includes airways, lungs, and the respiratory muscles that are all located in the thoracic region. The main muscle that causes the inhalation and exhalation movement, is called the diaphragm. As a result of movement of the diaphragm muscle, the thorax moves from 4 mm to 12 mm with a different frequency band between 0.1 Hz and 0.3 Hz [51]. The rate of this movement can be noted by observing the rhythms of breathing. The number of breaths per minute is called the breathing rate (BR). The range of the BR varies with age, weight, exercise tolerance, and body conditions, but the normal range at rest is between 12–20 breaths/min for adults [1]. During normal breathing, the BR is sometimes called eupnea while breathing abnormality occurs when BR falls outside the normal range and it can be classified into several events; tachypnea (a medical condition that occurs when BR exceeds the normal range), bradypnea (a medical condition occurs when BR is lower than the normal range), and central apnea (a medical condition occurs when there is no breathing for more than 10 s) [51,55].

Investigation of the validity of the proposed system for monitoring breathing activity and abnormality was performed on 12 healthy subjects (10 males and 2 females) between the ages of 20 and 40. Meanwhile, a commercial Piezo respiratory belt transducer (MLT1132) was applied to the subject’s thorax to measure BR for validation purposes. The study adhered to the Declaration of Helsinki ethical principles (Finland 1964). The protocol was approved by local ethics committees (protocol number: 0000034901), and a written informed consent form for all subjects was obtained after a full explanation of the research procedures before commencing the experiment. The ultrasonic PING sensor (40 KHz) was placed in front of the subject’s thorax at different distances (0.5, 1, 2, and 3 m). The experiment was for approximately 60–120 s for each subject at a room temperature of 15 °C and repeated at different times of the day with different clothing to obtain sufficient signals. One subject was asked to simulate abnormal breathing syndromes by following a defined protocol consisting of 10 s normal breathing, 13 s of high rate breathing, 13 s breath holding, 38 s of low rate breathing, 20 s breath holding, and 18 s of irregular breathing followed by normal breathing. The experimental setup and the annotated photograph of the proposed system are presented in Figure 1.

The schematic diagram of the proposed monitoring system is depicted in Figure 2. It can be divided into three main parts: The ultrasonic PING sensor, microcontroller PIC18F452, and smart G100 GSM modem.

The ultrasonic PING sensor is a low-cost range sensor unit developed by Parallax Inc. (Rocklin, CA, USA) [56]. This sensor detects the reflection, or echo signal from an obstacle (subject’s thorax) and evaluates the propagation delay and amplitude of the return signal. This sensor provides accurate and remote distance measurements from 2 cm to 3 m with spatial resolution of 0.3 mm [56]. The physical shape of the ultrasonic PING sensor is shown in Figure 3.
The sensor was connected to a PIC18F452 microcontroller, which was programmed to send a pulse, then to start an internal timer (16 bits) to measure the time interval in before the echoes were received. The echo pulses were then used by the PIC18F452 to calculate the difference in thorax displacement.
The ultrasound-based distance detection principle was used to accurately detect thorax displacement. Mathematically, if the acoustic propagation velocity () in m/s in a medium is known and is the time change taken by the ultrasound signal to travel a distance between the Tx and Rx, then the distance between the sensor and the subject,, can be calculated as follows:
For a given acoustic propagation velocity () in m.s−1 in a medium, the change in distance between the transmitted pulse and the received echo pulse in a proportionate time change due to inhalation and exhalation rhythms. Hence, the change in the distance (can be related to the breathing cycle as, where is inhalation time in s, is exhalation time in s, is pause period. At the reception of an echo by the peripheral interface controller (PIC), Equation (2) was converted into a logical vector to deal with 0 and 1, where 0 represents no breathing and 1 represents the active breathing, and to calculate BR based on the distance between ones (breath to breath) in the logical vector.

The PIC Microcontroller is a single chip embedded device manufactured by Microchip technology Inc. (Chandler, AZ, USA) to perform a specific function depending on the code integrated inside it. PIC18F452 is one of most commonly used microcontrollers for sensor integration and rapid prototyping, having five I/O ports (34 pins), 32 Kbyte of flash program memory, 256 bytes of electrically erasable programmable read only memory (EEPROM) data memory, 1536 bytes of SRAM data memory, four timers (one 8-bit and three 16-bit), built-in eight channel 10-bit analog-to-digital converter (ADC), built-in universal synchronous asynchronous receiver transmitter (USART) hardware and operates at up 40 MHz clock frequency. The variant of the microcontroller, PIC18F452, was used in this study because of its high-speed performance, low-cost, powerful interrupt structure, low energy consumption, programming flexibility, and suitability for many digital applications [57].

The smart G100 GSM is a full-featured development board manufactured by MikroElektronika Inc. (Belgrade, Serbia) [58] to provide GSM functionality. This board features an on-board voltage regulator, antenna holder, SIM card socket, DIP switches, audio amplifier, and an audio interface with microphone and speaker. This GSM modem can easily be connected to the communication lines of the microcontroller UART using the “Attention (AT) Commands” protocol. The AT commands are a special set of line prefixes that were standardized by the European Telecommunications Standards Institute (ETSI) and they can be recognized by many GSM modems on the market [59]. Using AT commands, including AT+CMGF (set text mode), AT+CPBW (write phone number), and AT+CMGS (write SMS). The GSM modem was adopted in this study due to limitations from the local mobile network in the country where the experiment was conducted, where the third generation (3G) is currently used in Iraq.

MikroBasic PRO for PIC compiler powered by Mikroelectronika Inc. (Belgrade, Serbia) [58] was used to write the code in the basic programming language. It provides an intelligent control, syntax error detection, and supporting tools for testing and debugging with helpful software libraries. On completion, the machine code file (hex file) generated from the MikroBasic PRO for the PIC compiler was loaded into the PIC18F452 microcontroller memory using EasyPIC PRO v7 (Mikroelectronika Inc. Belgrade, Serbia) (a full-featured development board for 8-bit PIC microcontrollers). After completing the programming, the PIC becomes ready to connect to the hardware circuit. The PIC programming flowchart of the proposed monitoring system is depicted in Figure 4.
The configuration and operation steps of the proposed monitoring system can be described as follows:

-
The I/O port pins of the PIC18F452 were connected to the ultrasonic PING sensor, smart G100 GSM, buzzer alarm circuit and 16 × 2 liquid crystal display (LCD) as shown in Figure 2. The ultrasonic sensor was connected to the PIC microcontroller through the pin (RC0), where the PIC triggers the sensor with 100 μs pulse-width and then measures the amount of time elapsing until the arrival of the reflected signal measured by the same pin. The audible alarm circuit was connected to the output pin of the PIC (RC3) with a light emitting diode (LED) and a sound buzzer. The LCD display unit was connected to the output port of the PIC (PORT B) to display the subject’s name and their breathing state. The RXD/TXD (receive/transmit data) DIP pins of the smart G100 GSM modem was interfaced with the PIC via a serial protocol UART (RC6) as transmitting pin (Tx) and RC7 as receiving pin (Rx).
-
The microcontroller initializes PING, LCD, and UART and creates a 32-bits floating point variable.
-
The ultrasonic PING sensor senses the motion in the thorax and detects the propagation delay and amplitude of the return signal.
-
The microcontroller reads the return signal and calcalutes the distance and breathing cycle using Equations (1) and (2). The microcontroller sends a text message alert to physician’s phone number when the BR falls outside the normal range (tachypnea for BR greater than 20 breaths/min and bradypnea for BR less than 12 breaths/min) [49] or when no breathing exists for more than 10 s.
-
A sleep/wake scheme has been implemented inside the microcontroller code based on a duty cycle. All components are in sleep mode until the microcontroller wakes up, which based on an internal timer interrupt.

Continuous monitoring of breathing activity could facilitate a more thorough and adequate assessment for early recognition of abnormal breathing syndromes. In this study, we have developed a real-time, non-contact, non-invasive, low cost, low power consumption, portable, and precise monitoring system for detecting the normal and abnormal breathing activity at a distance of up to 3 m for fully-clothed subjects using the ultrasonic PING sensor, PIC18F452 microcontroller, and smart G100 GSM modem. The proposed monitoring system was also supported with the energy-efficient sleep/wake scheme to reduce the power consumption of the internal components (i.e., ultrasonic sensor, LCD, microcontroller, and GSM). Through experimental analysis, it was confirmed that the proposed monitoring system has promising performance for detecting breathing activity compared to reference measurements from clinical instruments with acceptable quantitative agreement (average of confidence interval of −2.05 to +2.62 breaths/min(, reasonable correlation (average SRCC of 86%) and low error rate (average RMSE of 1.21 breaths/min). Results also show that the proposed monitoring system achieved 97.8% of power savings and extended the battery lifespan to 374.855 h instead of 8 h when the traditional operation was used instead without the sleep/wake scheme. Further research, experiments, advances in signal processing techniques for noise removal, sensor design, and system size should improve the distance, increase the reliability of the results, and reduce power consumption, which could yield a more comfortable, easy to use, cost-effective, and long-term breathing monitoring system for health care applications.

A.A.-N. conceived the algorithm and wrote the draft manuscript. A.A.-N., A.J.A.-A., and S.K.G. performed the experiments and data collection. J.C. supervised the work and contributed with valuable discussions and scientific advice. All authors read and approved the final manuscript.

The authors would like to acknowledge their gratitude to all those academic staff and organizations (Middle Technical University and University of South Australia) who made this work possible. 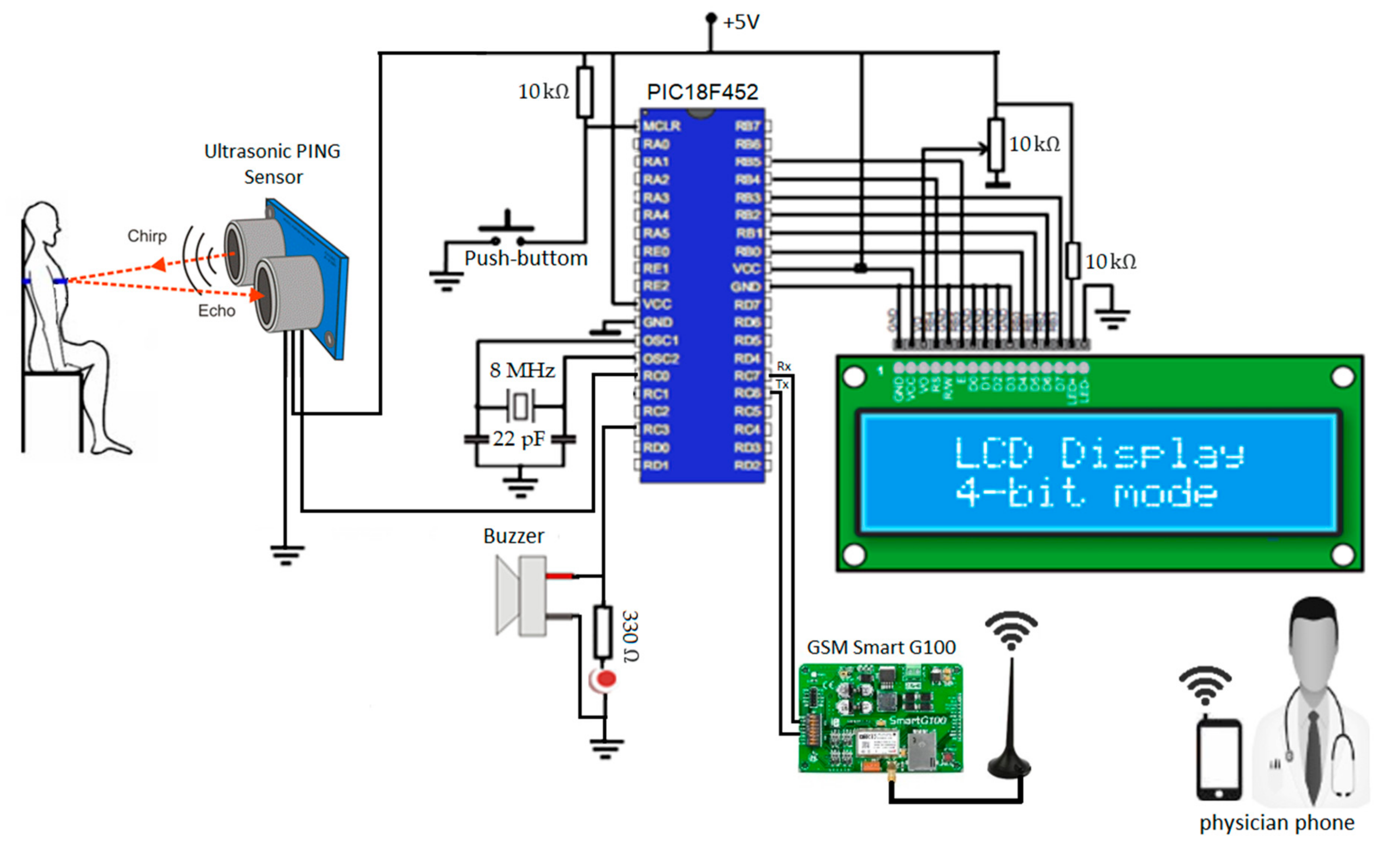 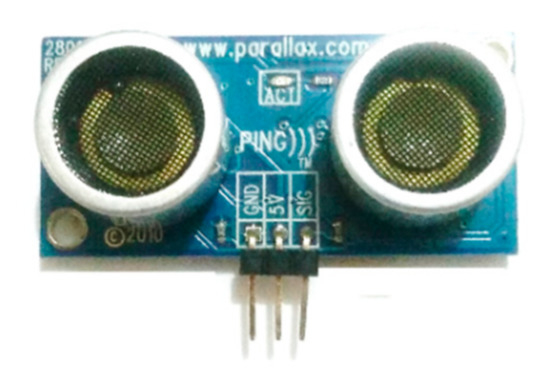 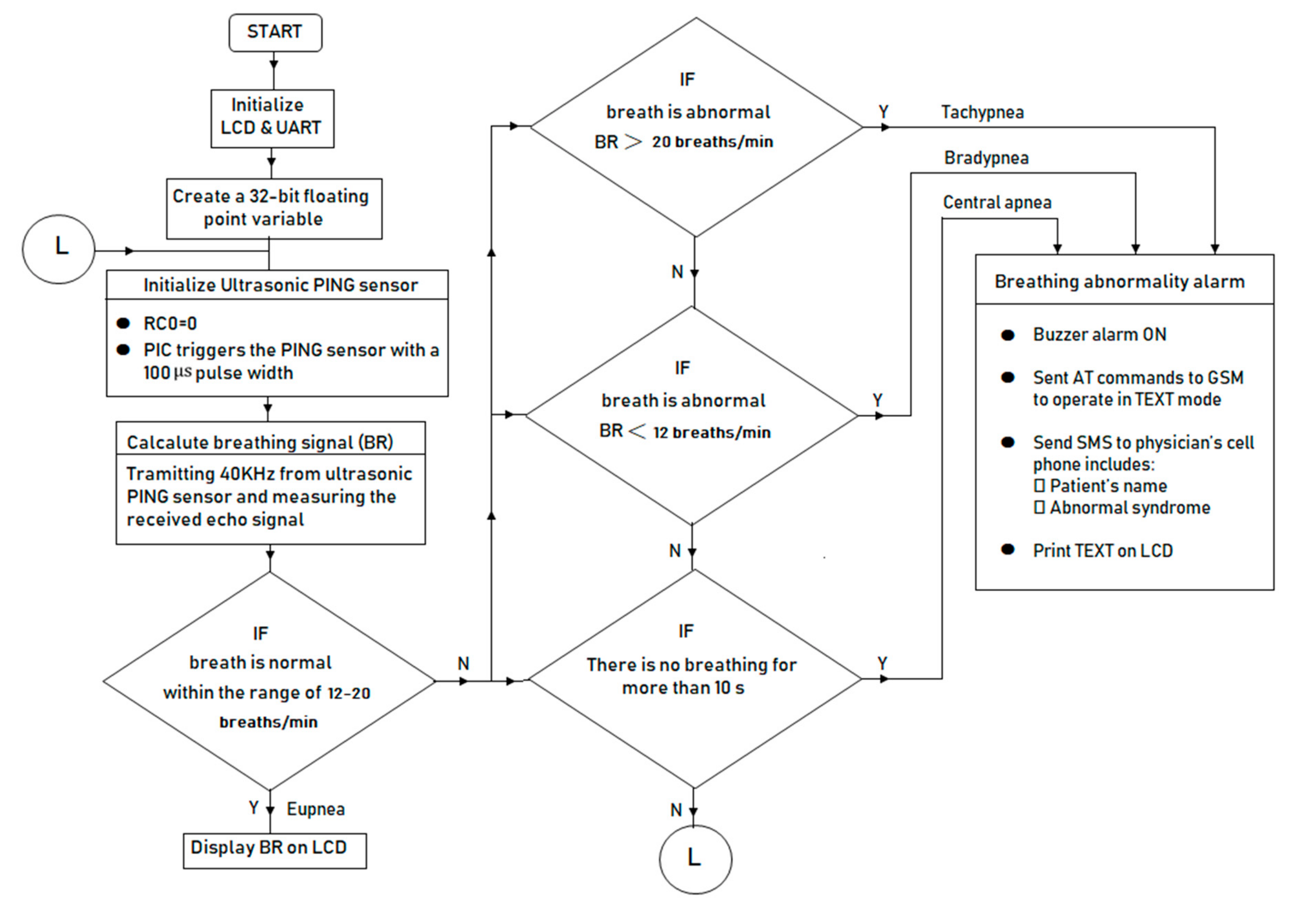 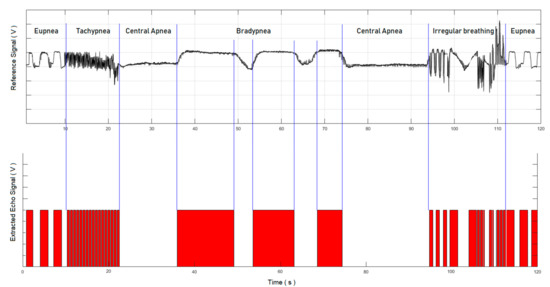 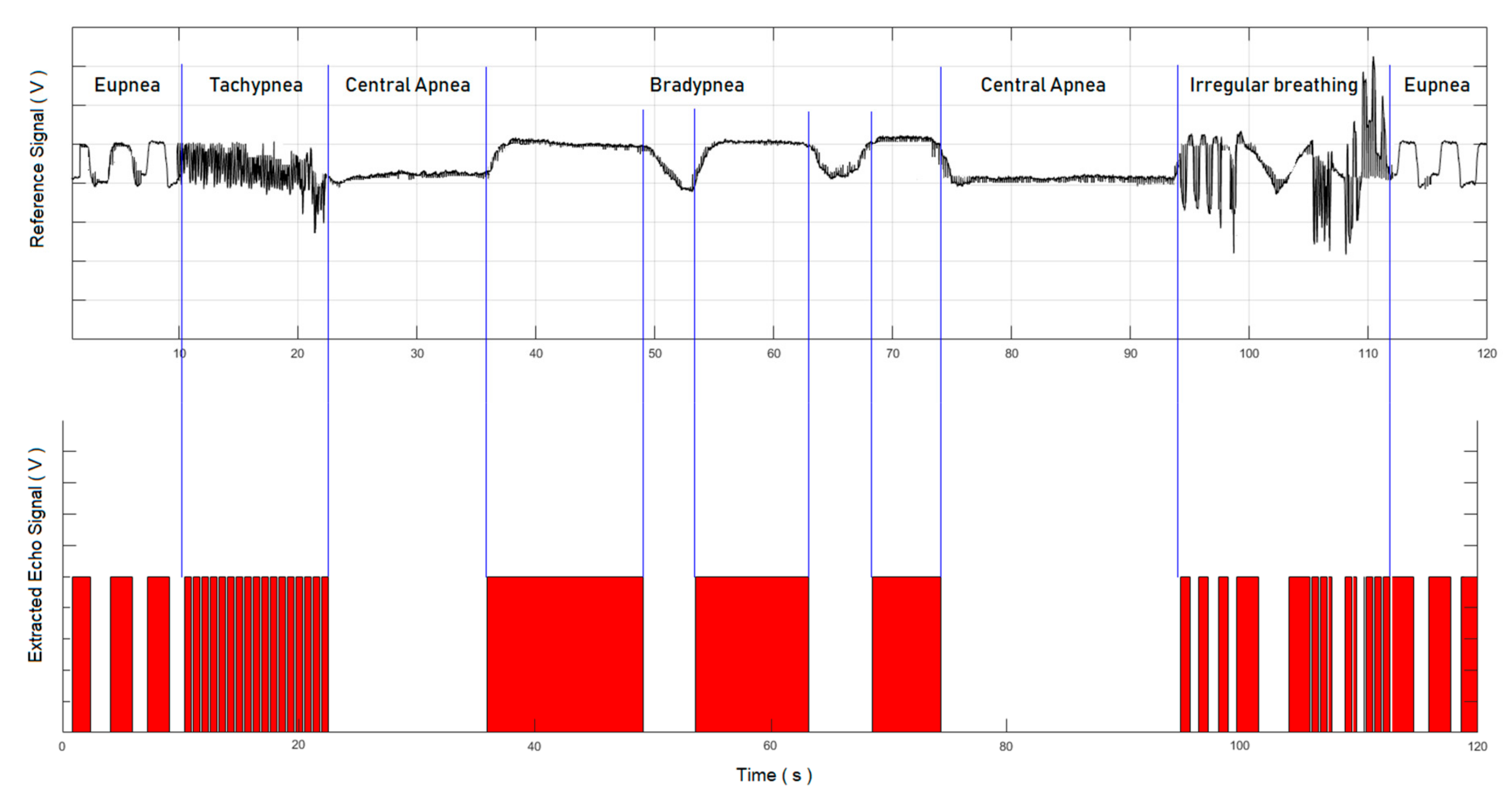 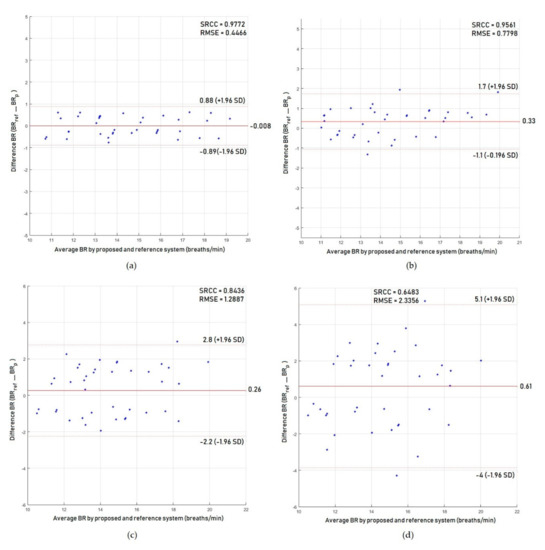 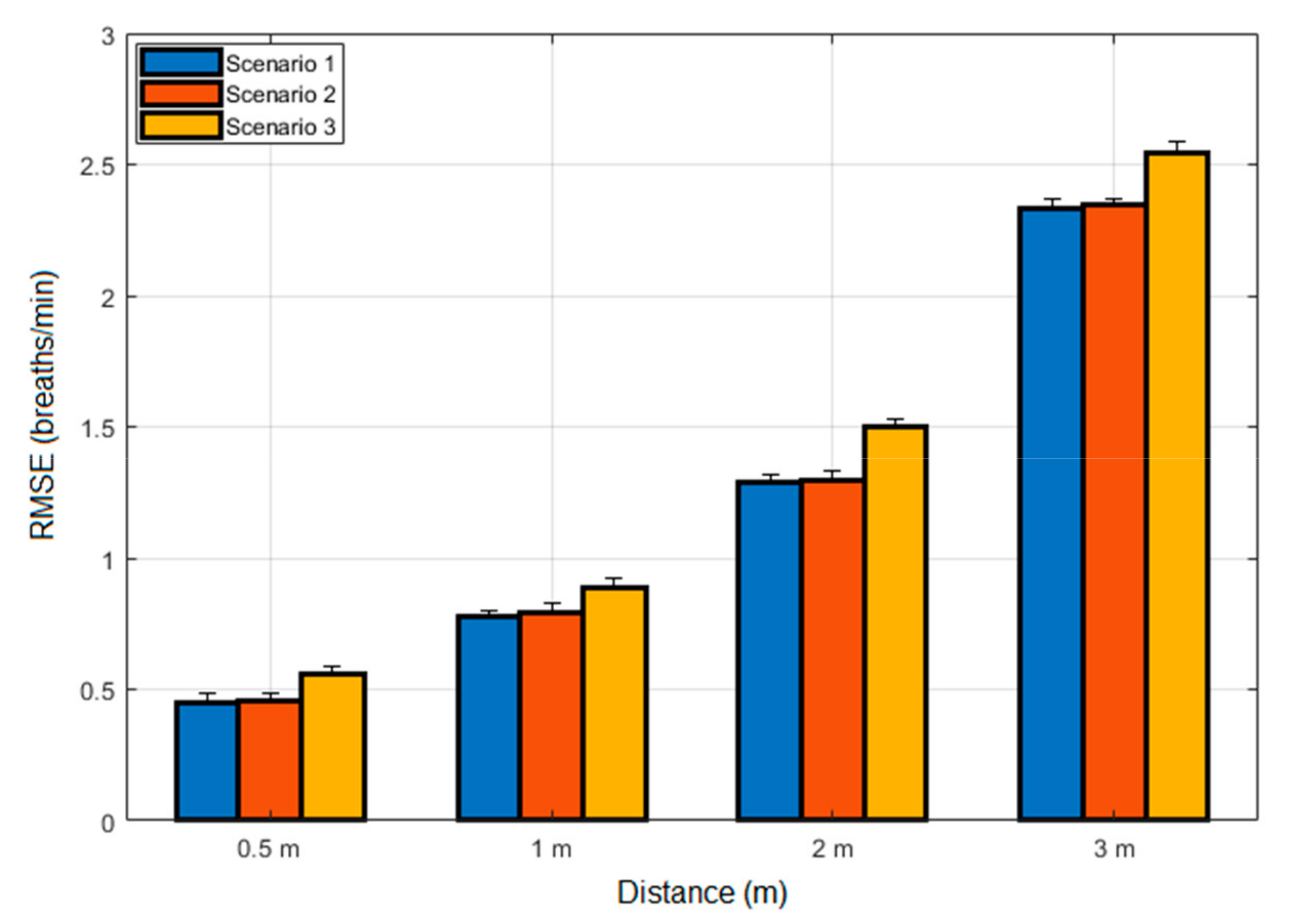 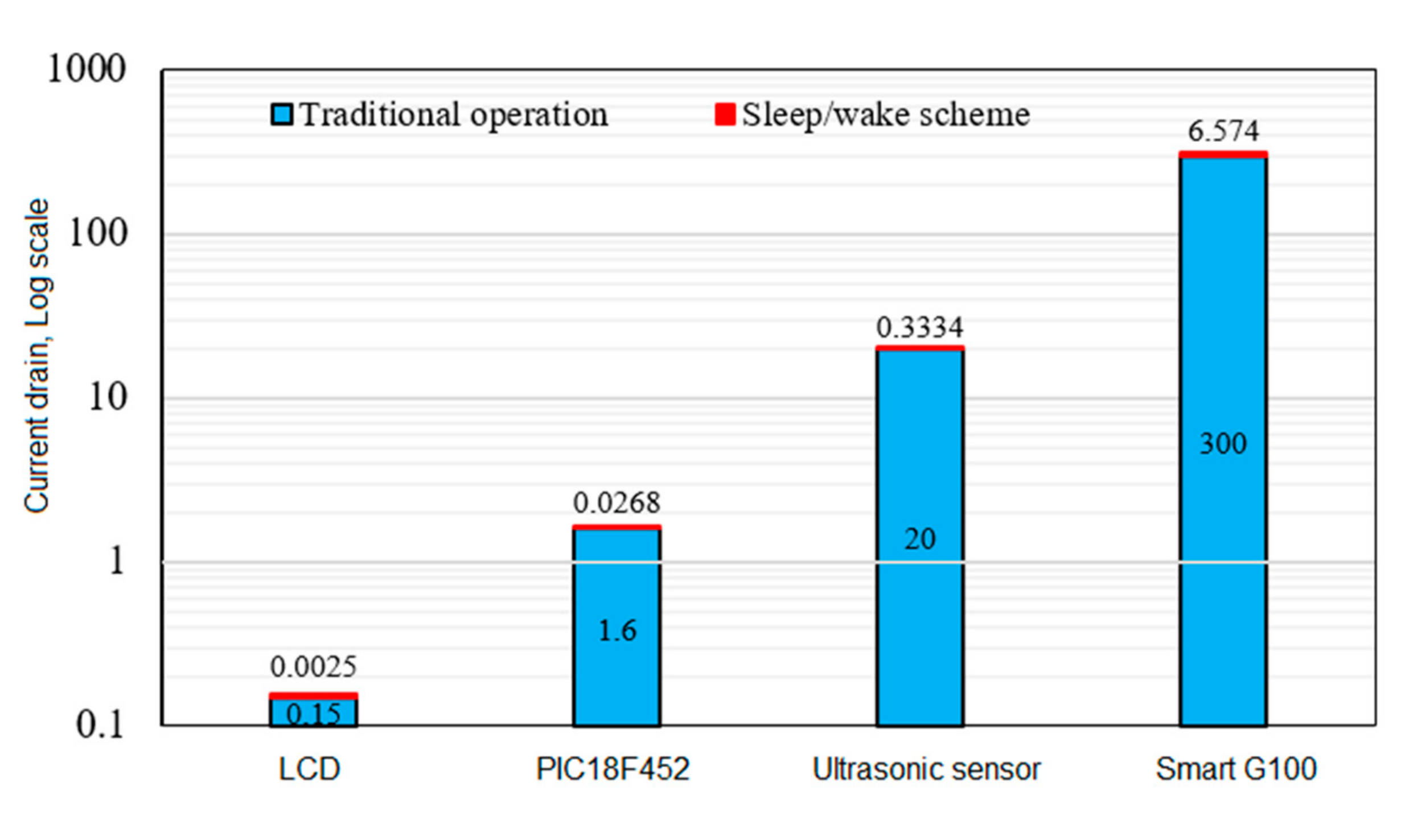 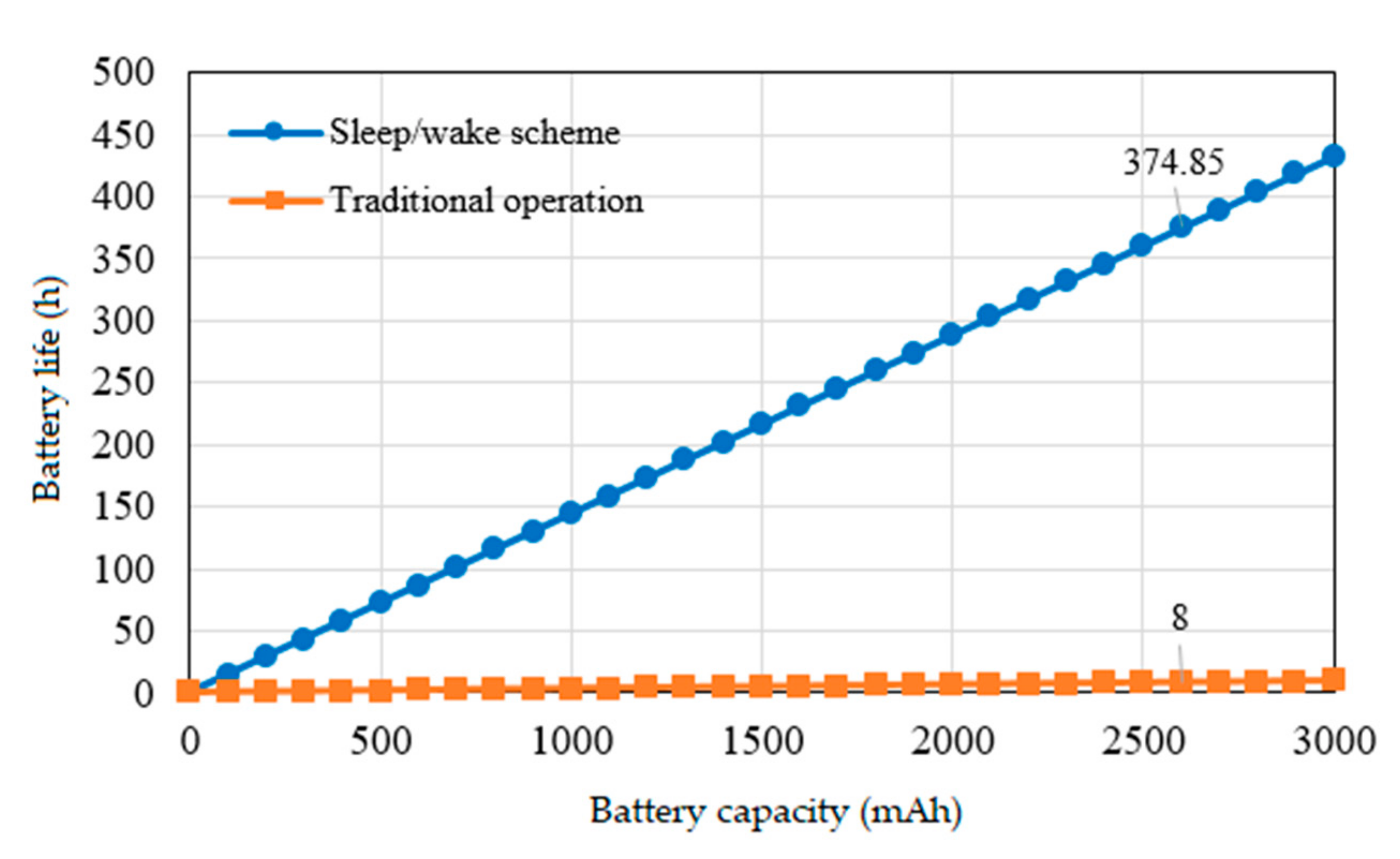