Distributed antenna systems (DASs) are known to be effective to enhance coverage, spectral efficiency, and reliability in mobile communication systems. Because multiple antennas are physically separated in space, DASs benefit from both micro- and macro-diversity, which makes DASs significantly more robust compared to conventional co-located antenna systems in fading channels. However, when multiple antennas are not dispersed enough, there exists a certain degree of correlation in large-scale fading (shadowing), which degrades the macro-diversity gain. In practice, various measurements indicate a high degree of correlation of shadowing in DASs. However, most of the previous studies on DASs have not considered the correlated shadowing and its corresponding performance loss. Motivated by this limitation, we analyze the impact of the correlated shadowing to better evaluate DAS-based schemes with dual diversity transmitters. Assuming that shadowing correlation is an exponentially decreasing function of the inter-element separation, we derive the outage probability of DAS in composite Rayleigh-lognormal shadowing channels. Also, we present numerical and simulation results, which indicate there exists an optimal inter-separation between antennas that minimizes the outage rate to balance a trade-off between macro-diversity and path loss. View Full-Text
Keywords: distributed antenna systems (DASs); cooperative transmission (CT); correlated shadowing; exponentially decaying correlation distributed antenna systems (DASs); cooperative transmission (CT); correlated shadowing; exponentially decaying correlation
►▼ Show Figures 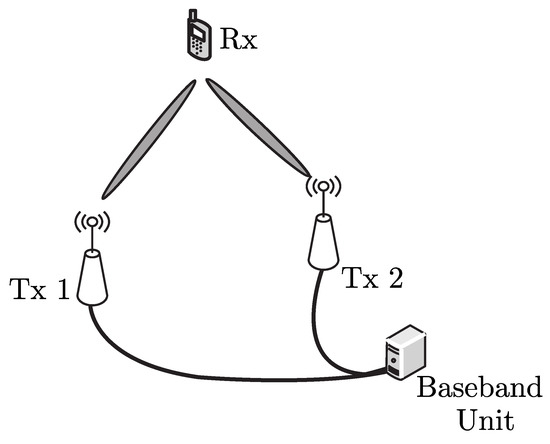