Meehania montis-koyae Ohwi (Lamiaceae), which has been considered a narrow endemic and endangered species in Japan, was found in eastern China in 2011. China and Japan belong to the same floristic region and share many plant species, but it is very rare that Japanese narrow endemic species are newly found outside of the country. We examined herbarium specimens of both countries, and conducted analyses of molecular phylogenetics, population genetics, and divergence time estimation using two nuclear (ITS and ETS) gene regions and MIG-seq data. Chinese plants tend to become larger than Japanese, and they are different in leaf shape and floral features. Molecular phylogenetic analysis shows Chinese and Japanese M. montis-koyae are the closest relatives to each other. Population genetic analysis indicates no current gene flow between the Chinese and Japanese populations, and divergence time analysis shows they were separated during the late Miocene. We reach the conclusion that Chinese and Japanese M. montis-koyae have already become distinct biological entities, and a new taxon name Meehania zheminensis A. Takano, Pan Li, G.-H.Xia is proposed for the Chinese plants. A key to Asian Meehania species is provided. View Full-Text
Keywords: Lamiaceae; Meehania montis-koyae; MIG-seq; population genetic analysis; Sino-Japanese disjunct distribution Lamiaceae; Meehania montis-koyae; MIG-seq; population genetic analysis; Sino-Japanese disjunct distribution
►▼ Show Figures 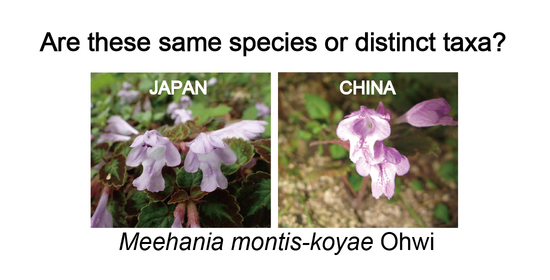