The Genus Pratylenchus (Nematoda: Pratylenchidae) in Israel: From Taxonomy to Control Practices
Previous Article in Journal

:
The potato cyst nematode (PCN) Globodera rostochiensis is a plant parasite of potato classified into a group of quarantine organisms causing high economic losses worldwide. Due to the long persistence of the parasite in soil, cysts harbor numerous bacteria whose presence can lead to cyst death and population decline. The cysts of G. rostochiensis found in two potato fields were used as a source of bacteria. The universal procedure was applied to extract DNA from bacteria which was then sequenced with 16S primers. The aims of the study were to identify bacterial microbiota associated with the PCN populations and to infer their phylogenetic relationships based on the maximum likelihood and Bayesian phylogeny of the 16S sequences. In addition, the impact of the most significant climate and edaphic factors on bacterial diversity were evaluated. Regarding the higher taxonomy, our results indicate that the prevalent bacterial classes were Bacilli, Actinobacteria and Alphaproteobacteria. Phylogenetic analyses clustered Brevibacterium frigoritolerans within the family Bacillaceae, confirming its recent reclassification. Long-term climate factors, such as air temperature, insolation hours, humidity and precipitation, as well as the content of soil organic matter, affected the bacterial diversity. The ability of cyst nematodes to persist in soil for a long time qualifies them as a significant natural source to explore the soil bacterial microbiota.
Keywords:
potato cyst nematodes; Bacilli; Actinobacteria; Alphaproteobacteria; 16S; maximum likelihood; Bayesian inference; climate and edaphic factors

Bacteria are ubiquitous organisms, inhabiting even the most extreme environments like polar snow [1], volcanoes and acidic hot springs [2,3]. The natural soil environment, aside from other microorganisms, harbors as many as 106–108 bacterial cells and 106–107 actinomycete cells per 1 g and around 107 nematodes per 1 m2 [4].
The potato cyst nematodes (PCNs) Globodera rostochiensis and G. pallida are plant parasites of potatoes and other Solanaceae plants, classified as quarantine organisms. PCN females are sedentary organisms living inside potato roots with numerous eggs within their enlarged spherical bodies called cysts. The nematodes develop within the eggs to first and second stage juveniles. The latter is the invasive stage, searching for the appropriate host plant. When they find a target host, they start to invade roots, penetrating the host tissue with their stylets and move inside it. Inside the root tissue, they develop into females and males. After mating and fertilization, new eggs and juveniles are produced within the cysts, so the parasitic cycle continues. Some juveniles do not hatch until the following season or favorable conditions, remaining in soil for a long time [5]. The potato cyst nematodes cause up to GBP 300M worth of damage to the potato crop in the EU each year [6].
Both Globodera species were brought to Europe with the introduction of potato from South America [7]. Because the PCNs persist in soil, the external and internal areas of cysts harbor numerous microorganisms whose presence can lead to cyst death and population decline, suggesting that they can be potential candidates for use in biocontrol. Microscopic counts using 5-(4,6-dichlorotriazine-2-yl) aminofluorescein staining and in situ hybridization (EUB 338) revealed that cysts contain 2.6 × 105 bacteria [8].
Diverse bacterial species have been reported as nematode antagonists. Streptomyces avermitilis and Pseudomonas fluorescens were found to possess anthelmintic properties [9]. Nine isolates belonging to Pseudomonas and Streptomyces species were found to control both fungal pathogens and Meloidogyne incognita and were considered as promising biological control agents [10]. Bacterial isolates that inhibited egg hatching of the potato cyst nematodes were mostly from the genus Bacillus [11]. Bacterial species of the genus Pasteuria were found to be parasites of Meloidogyne, Belonolaimus, Pratylenchus, Heterodera, and Globodera spp. [12]. The Gram-negative bacterium Stenotrophomonas (Xanthomonas) maltophilia G2 was found to have a high nematotoxic activity against the free-living nematode Panagrellus redivivus, and the plant parasitic nematode Bursaphelenchus xylophilus [13]. Serratia, Curtobacterium, Pseudomonas, Pantoea, and Rhanella species were nematotoxic toward B. xylophilus [14]. Treatment with B. cereus strain S2 had a lethal effect on Caenorhabditis elegans and M. incognita [15].
This study aims to: (i) identify bacterial species associated with two PCN populations, (ii) infer phylogenetic relationships of the bacteria based on the maximum likelihood (ML) and Bayesian inference (BI) of 16S sequences rRNA genes, (iii) evaluate the influence of some microclimate and edaphic factors on bacterial diversity.

The cysts of G. rostochiensis found in potato fields near the locations of Pozega (44°04′ N 20°14′ E) and Krupanj (44°18′ N 19°20′ E) were used as a source for screening bacterial microbiota. During the growing season, the soil samples were taken as 50 subsamples/ha in a systematic sampling pattern in order to make approximately one kilogram of composite sample [42].The cyst extraction was done with the Spears apparatus [43] and collected on a 150-µm sieve.
Fifty randomly selected cysts of different ages from each location were surface sterilized with 96% ethanol, 1.5% NaOCl and washed with sterile water according to the procedure applied for Globodera juveniles [44]. The cysts were placed on potato dextrose agar (PDA) and maintained for seven days at 25 °C. After the emergence of bacteria on PDA, single bacterial colonies were used to obtain pure cultures by the streakplate method [45].

The extraction of DNA from bacteria was performed according to a previously described procedure [46]. The PCR reaction mixture consisted of 25 μL 2× PCR Mastermix, 0.5 μL of forward and reverse primers (10 µM), 1 μL of DNA template and PCR-grade water to a total volume of 50 μL. Amplification of the DNA region coding for 16S rRNA was performed by using P0 (5′-GAGAGTTTGATCCTGGCTCAG-3′) and P6 (5′-CTACGGCTACCTTGTTACGA-3′) primers. The temperature profile for the PCR reaction was as follows: 95 °C for 90 s followed by 35 cycles consisting of 95 °C for 30 s, the annealing temperature (60 °C for the first 5 cycles, 55 °C for the next 5 cycles, and 50 °C for the last 25 cycles) for 30 s, and 72 °C for 4 min. The reaction mixture was then incubated at 72 °C for 10 min and at 60 °C for 10 min. The obtained PCR products were purified and sequenced [47]. Phylogenetic analyses were performed with sequences of the isolated bacterial species deposited under accession numbers MT394477-MT394483 (Pozega) and MT410635-MT410639 (Krupanj) and related species from the GenBank nucleotide sequence database, using maximum likelihood (ML) and Bayesian inference (BI) phylogenetic methods. The ML and BI were calculated with the help of PhyML 3.1 [48], and MrBayes 3.1.2 [49] computer programs, respectively. The sequence alignment was done with ClustalW in Mega 4 [50].
The ML tree was obtained with the General Time Reversible model (GTR), invariable sites and gamma distribution (GTR + I + G). The dendrogram obtained by Bayesian inference was created by 2.2 × 106 generations of Markov Chain Monte Carlo, with a sample frequency of 100, and burning function of 20%. The nucleotide evolution model was GTR + I + G as well. Branch supports higher than 70% were shown next to the node.

The annual values of climate factors of Pozega and Krupanj were obtained from the official site of the Republic Hydrometeorological Institute of Serbia. The 28-year period (1990–2018) was used for calculating the means of the optimum, maximum, and minimum air temperature, the relative humidity, insolation, cloudiness and precipitation.
The units for the air temperatures were presented in degrees Celsius, the relative air humidity was expressed in percentages, while the duration of the solar radiation (insolation) was expressed in hours. Values of the cloudiness parameter lower than 2 were considered as clear days, while values higher than 6 were considered as cloudy days. The precipitation was expressed in millimeters (Table 1). Soil pH, the content of organic matter, the amount of nitrogen, phosphorus and potassium, as well as the soil granulometric composition (Table 2), were determined according to standard methods and those from the literature [51,52,53,54,55]. The values were compared with a post-ANOVA Tukey’s honest significant difference (HSD) test using DSAASTAT computer program [56], at the 95% confidence interval. Values with the same letter were not significantly different from each other.

Regarding the higher bacterial taxonomy, our results indicate that the observed locations have similar microbiota, but with a different abundance and species identity. The dominant bacterial phyla are Firmicutes, Actinobacteria and Proteobacteria. Based on 16S sequences, the maximum likelihood and the Bayesian phylogeny clustered the members of the genus Bacillus, Psychrobacillus and Paenibacillus within the family Bacillaceae. Brevibacterium frigoritolerans belonged to the same group with B. cereus, B. megaterium and B. flexus within the family Bacillaceae, confirming its recent reclassification. Other clades were occupied by Devosia and Arthrobacter species known for their function in environmental detoxification and the degradation of pesticides. The lower values of air temperatures, insolation, and precipitation and the higher values of relative humidity and cloudiness created conditions for the development of psychrophilic species. The location of Pozega is characterized by psychrotolerant representatives of Bacillus frigoritolerans, and a Psychrobacillus species. In contrast, Krupanj is characterized by the higher content of potassium, the lower content of organic matter and the presence of bioremediators such as Devosia and Arthrobacter species. In other words, bacterial species perform as specific indicators of microclimate properties and environmental pollution.
As efforts have been moved towards expanding the source of microorganisms involving the more complex systems in nature [57], nematodes and their related bacterial microbiota present the next biological system to explore the taxonomic diversity of soil bacteria. Nematodes, especially cyst nematodes, are a significant natural source of microorganisms due to their long persistence in soil and the specific environmental conditions inside and outside of the closed area of cysts, in which diverse bacteria are hidden.

This research was supported by the Serbian Ministry of Education, Science and Technological Development. 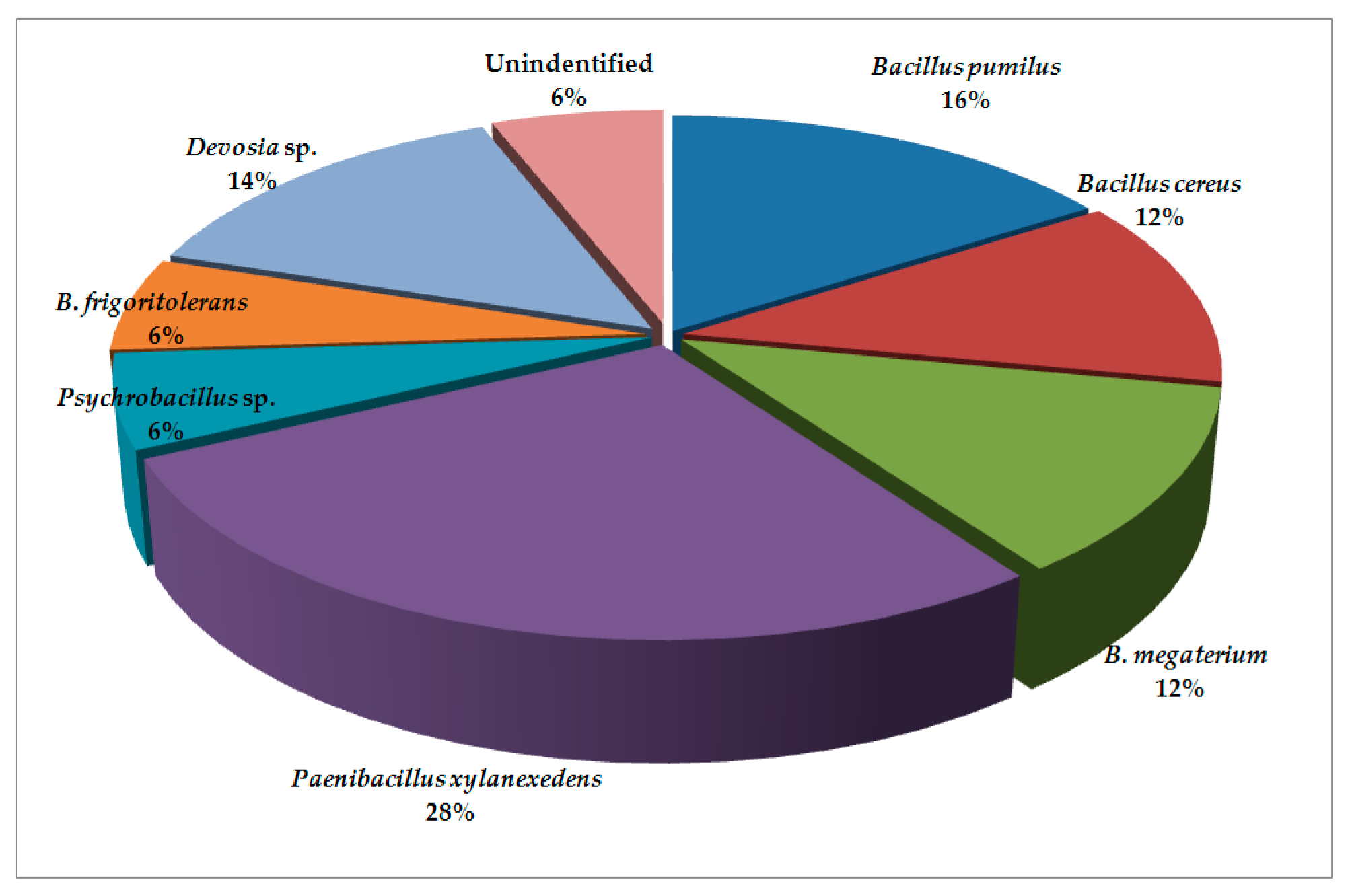 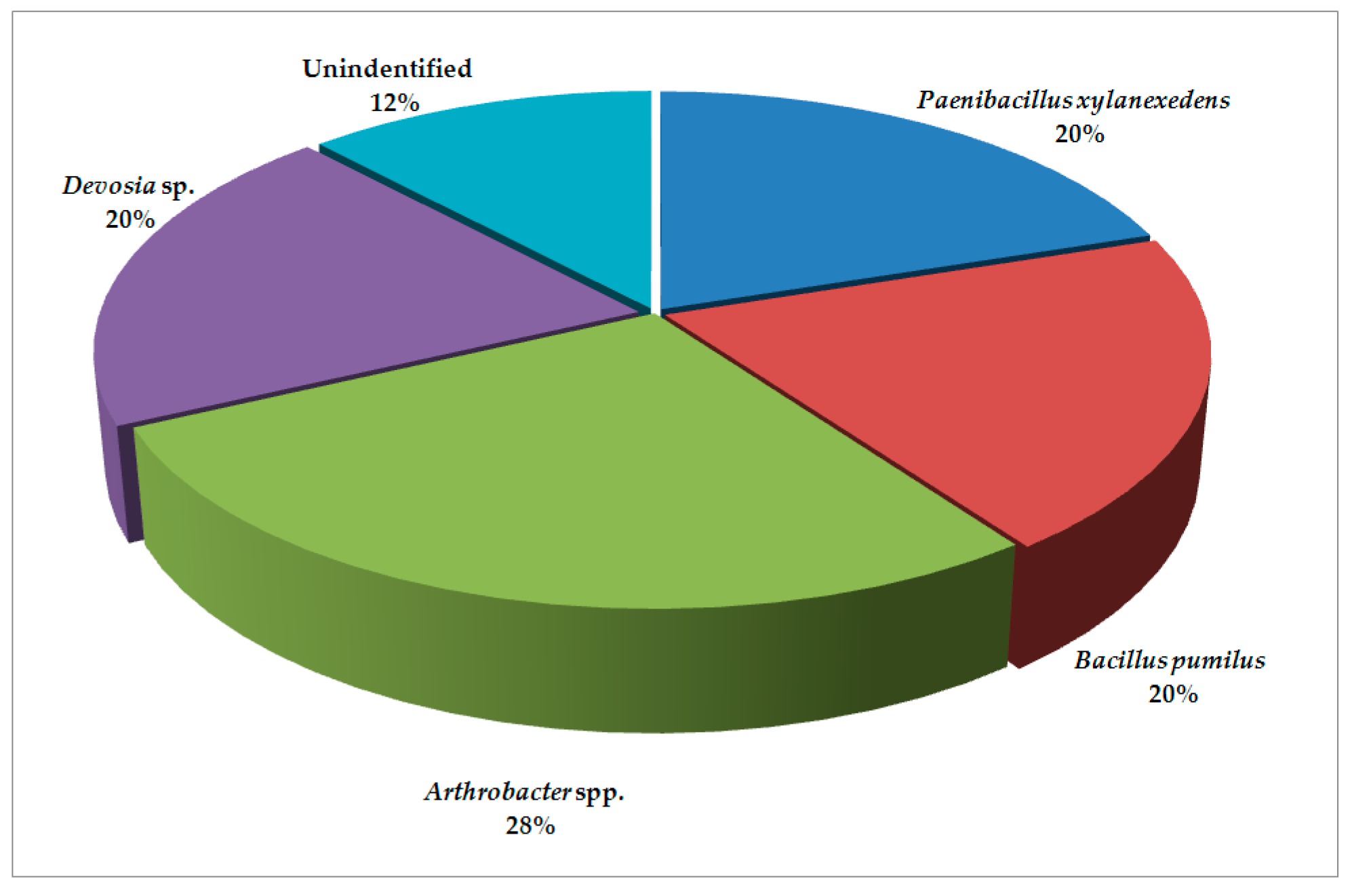