Complete Chloroplast Genome of Rhipsalis baccifera, the only Cactus with Natural Distribution in the Old World: Genome Rearrangement, Intron Gain and Loss, and Implications for Phylogenetic Studies

Rhipsalis baccifera is the only cactus that naturally occurs in both the New World and the Old World, and has thus drawn the attention of most researchers. The complete chloroplast (cp) genome of R. baccifera is reported here for the first time. The cp genome of R. baccifera has 122, 333 base pairs (bp), with a large single-copy (LSC) region (81,459 bp), SSC (23,531 bp) and two inverted repeat (IR) regions each 8530 bp. The genome contains 110 genes, with 73 protein-coding genes, 31 tRNAs, 4 rRNAs and 2 pseudogenes. Twelve genes have introns, with loss of introns being observed in, rpoc1clpP and rps12 genes. 49 repeat sequences and 62 simple sequence repeats (SSRs) were found in the genome. Comparative analysis with eight species of the ACPT (Anacampserotaceae, Cactaceae, Portulacaceae, and Talinaceae) clade of the suborder Portulacineae species, showed that R. baccifera genome has higher number of rearrangements, with a 19 gene inversion in its LSC region representing the most significant structural change in terms of its size. Inversion of the SSC region seems common in subfamily Cactoideae, and another 6 kb gene inversion between rbcL- trnM was observed in R. baccifera and Carnegiea gigantea. The IRs of R. baccifera are contracted. The phylogenetic analysis among 36 complete chloroplast genomes of Caryophyllales species and two outgroup species supported monophyly of the families of the ACPT clade. R. baccifera occupied a basal position of the family Cactaceae clade in the tree. A high number of rearrangements in this cp genome suggests a larger number mutation events in the history of evolution of R. baccifera. These results provide important tools for future work on R. baccifera and in the evolutionary studies of the suborder Portulacineae. View Full-Text
Keywords: Rhipsalis baccifera; Cactaceae; chloroplast genome; rearrangements; phylogeny Rhipsalis baccifera; Cactaceae; chloroplast genome; rearrangements; phylogeny
►▼ Show Figures 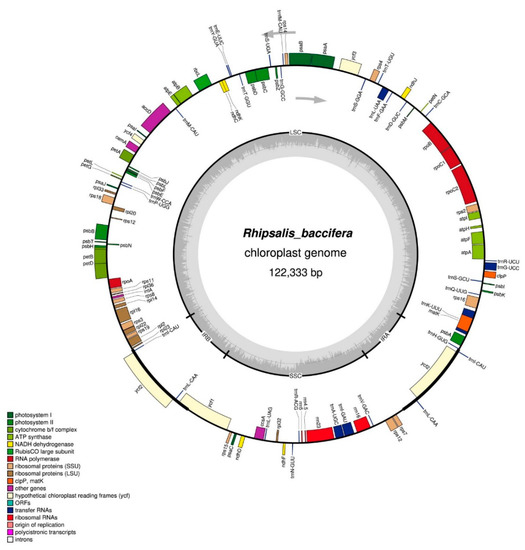