Enhanced UV-Reflection Facilitated a Shift in the Pollination System of the Red Poppy, Papaver rhoeas (Papaveraceae)

Oxalis corniculata L. (family Oxalidaceae) is a small creeper wood sorrel plant that grows well in moist climates. Despite being medicinally important, little is known about the genomics of this species. Here, we determined the complete chloroplast genome sequence of O. corniculata for the first time and compared it with other members of family Oxalidaceae. The genome was 152,189 bp in size and comprised of a pair of 25,387 bp inverted repeats (IR) that separated a large 83,427 bp single copy region (LSC) and a small 16,990 bp single copy region (SSC). The chloroplast genome of O. corniculata contains 131 genes with 83 protein coding genes, 40 tRNA genes, and 8 rRNA genes. The analysis revealed 46 microsatellites, of which 6 were present in coding sequences (CDS) regions, 34 in the LSC, 8 in the SSC, and 2 in the single IR region. Twelve palindromic repeats, 30 forward repeats, and 32 tandem repeats were also detected. Chloroplast genome comparisons revealed an overall high degree of sequence similarity between O. corniculata and O. drummondii and some divergence in the intergenic spacers of related species in Oxalidaceae. Furthermore, the seven most divergent genes (ccsA, clpP, rps8, rps15, rpl22, matK, and ycf1) among genomes were observed. Phylogenomic characterization on the basis of 60 shared genes revealed that O. corniculata is closely related to O. drummondii. The complete O. corniculata genome sequenced in the present study is a valuable resource for investigating the population and evolutionary genetics of family Oxalidaceae and can be used to identify related species. View Full-Text
Keywords: Oxalidaceae; chloroplast genome comparison; inverted repeats; divergence; SSRs; phylogeny Oxalidaceae; chloroplast genome comparison; inverted repeats; divergence; SSRs; phylogeny
►▼ Show Figures 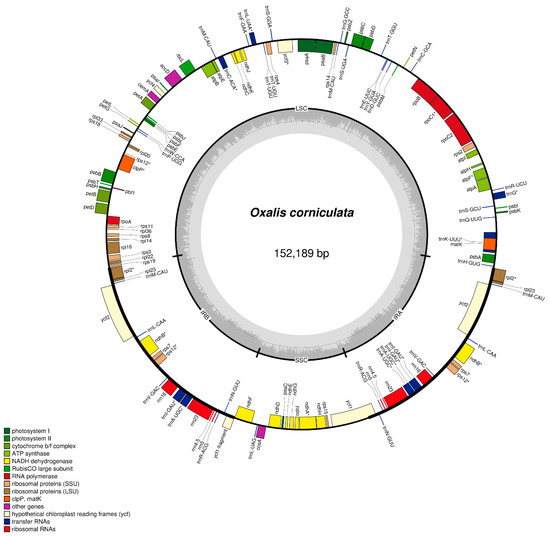