Oilseed rape (Brassica napus) is a Cadmium (Cd) hyperaccumulator. However, high-level Cd at the early seedling stage seriously arrests the growth of rape, which limits its applications. Brassica juncea had higher Cd accumulation capacity, but its biomass was lower, also limiting its applications. Previous studies have confirmed that Selenium (Se) can alleviate Cd toxicity. However, the regulatory mechanism of Se in different valence states of Cd accumulation was unclear. In this study, we investigated the ameliorating effects of three Se valence states, Na2SeO4 [Se(VI)], Na2SeO3 [Se(IV)] and Se-Met [Se(II)], to Cd toxicity by physiological and biochemical approaches in hydroponically-cultured Brassica juncea and Brassica napus seedlings. Although Se treatments slightly inhibited seedling Cd concentration, it tripled or quadrupled the Cd accumulation level per plant, because dry weight increased about four times more with Se and Cd application than with Cd treatment alone. Among the different valence states of Se, Se(II) had the most marked effect on reducing Cd toxicity as evidenced by decreased growth inhibition and Cd content. The application of Se(II) was effective in reducing Cd-induced reactive oxygen species accumulation, and promoted the antioxidant enzyme activity and photosynthesis of both Brassica species. In addition, Se(II) treatment increased the concentrations of Cd in the cell wall and soluble fractions, but the Cd concentration in the organelle part was reduced. View Full-Text
Keywords: Selenium; chlorophyll fluorescence; Cadmium; subcellular distribution; accumulation capacity Selenium; chlorophyll fluorescence; Cadmium; subcellular distribution; accumulation capacity
►▼ Show Figures 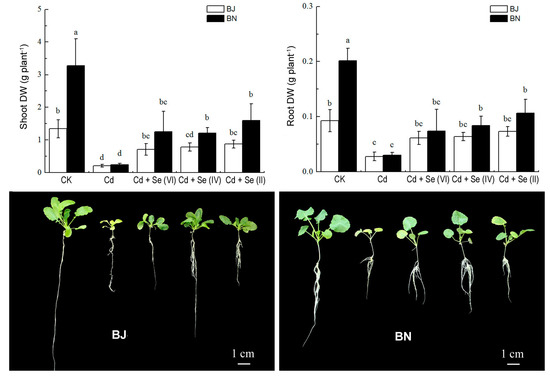