Changes in the Phenolic Compounds of Hop (Humulus lupulus L.) Induced by Infection with Verticillium nonalfalfae, the Causal Agent of Hop Verticillium Wilt

:
Phenolic compounds are involved in plant responses to various biotic and abiotic stress factors, with many studies suggesting their role in defense mechanisms against fungal pathogens. Soilborne vascular pathogen Verticillium nonalfalfae causes severe wilting and consequent dieback in a wide range of economically important crops, including hops (Humulus lupulus L.). In this study, we investigated the differential accumulation of phenolics in the susceptible “Celeia” and resistant “Wye Target” hop cultivars during the pathogenesis of Verticillium wilt. Quantitative polymerase chain reaction showed that colonization in the roots of both cultivars was intensive, but decreased continuously throughout the experiment in the resistant cultivar, while the relative fungal amount continuously increased in the stems of the susceptible cultivar. In response to colonization in the roots of the resistant cultivar, a significant increase in total flavanols was detected at three days postinoculation (dpi), suggesting a possible role in preventing fungus spread into the stems. The accumulation of phenolic compounds was less pronounced in the stems of the resistant cultivar since, compared to the latter, significant increases in flavonols at 3 and 15 dpi and hydroxycinnamic acids at 6 dpi were observed in the stems of the susceptible cultivar.
Keywords:
Humulus lupulus; Verticillium nonalfalfae; fungal infection; phenolic compounds; plant–pathogen interactions

Plant inoculation was performed according to the protocol described by [57]. Briefly, one-year-old rooted cuttings of Verticillium-wilt-resistant (WT; Wye Target) and -susceptible (CE; Celeia) hop cultivars were artificially inoculated by immersing the roots in a conidial suspension (5 × 106 conidia per mL) of V. nonalfalfae lethal (PV1) pathotype (Isolate T2) for 10 min, while the control plants were mock-inoculated using sterile water. Afterward, the plants were repotted to a sterile commercial substrate and grown in a growth chamber under controlled conditions [57].
Verticillium- and mock-inoculated hop plants of each cultivar were sampled at 1, 3, 6, 12, 15, 18, and 30 days postinoculation (dpi). Fifteen inoculated and three mock-inoculated hop plants (stems and roots) of each cultivar were used for fungal colonization analysis; three mock-inoculated and eight Verticillium-inoculated stem or root samples from 1, 3, 6, 15, and 18 dpi were used to analyze the phenolic compounds. On the basis of a similar relative amount of fungal DNA present in the inoculated samples, eight root or stem samples of Verticillium-inoculated hop plants were pooled into four inoculated root or stem samples and used for further analysis of phenolic compounds.
Samples were taken from the washed roots and stems; bines were cut at the first node. Sampled tissue was freeze-dried with liquid nitrogen, ground to a fine powder using autoclaved mortars and pestles, and stored at –80 °C until isolation of total genomic DNA and extraction of phenolic compounds.

Total genomic DNA was extracted from the inoculated and control samples as described by Kump and Javornik [58]. The concentration of DNA isolates was determined by means of spectrophotometry and diluted to 25 ng µL−1. Relative quantity of V. nonalfalfae DNA in plants was determined using Applied Biosystems® 7500 real-time quantitative PCR system (Applied Biosystems, Foster City, USA) and Fast SYBR® Green technology (Thermo Fisher Scientific). Fungal DNA levels were detected and estimated with V. nonalfalfae lethal genotype (PG2)-specific primer pair 5-1gs-F-GAGCGGGTCGATACGATTCA and 5-1gs-R-GGTGATGTCCAGCACAGTGATAC. The absence of fungal DNA in the control samples was also confirmed by real-time PCR. Real-time PCR was carried out in a 10 µL total reaction volume containing 5 µL Fast SYBR Green Master Mix, 25 ng of total genomic DNA, and 300 nM of each V. nonalfalfae genotype-specific forward and reverse primer.
The following amplification program was used: 95 °C for 20 s, 40 cycles at 95 °C for 3 s, and 60 °C for 30 s. This was followed by the melting curve stage at 95 °C for 15 s, 60 °C for 60 s, 95 °C for 15 s, and 60 °C for 15 s to monitor primer specificity and the formation of nonspecific PCR amplicons.
All samples were amplified in two technical replicates acquired from the same total DNA sample. The amplification levels of the target sequence were determined as cycle-threshold (Ct) values that represent the number of cycles needed to reach a threshold of amplification fixed in the exponential phase of the PCR reaction [59]. The amplification efficiency of the amplified target sequence (5-1gs) was determined from a standard curve obtained from five 5-fold serial dilutions of all per-dpi-pooled total genomic DNA samples ranging from 25 to 0.04 ng µL−1. Normalization of relative fungal DNA quantity in plant samples was performed by using the plant reference gene DRH1 (F- 5’-CCAACCTACTGGGCTTCGAC-3’ and R- 5’-CAGAATGGGTATGATCGGGC-3’), as previously described by Stajner et al. [60], and relative changes in the quantity of fungal DNA were determined using the 2−ΔCt method [61]. Specific primer pairs that amplified the locus of the lethal pathotype of V. nonalfalfae (PG2 5-1gs) were optimized to verify successful colonization and to assess the relative amount of fungal DNA in hop plants.

Root- and stem-tissue samples of both cultivars were used for the extraction and determination of phenolic compound contents. Fine tissue powders (200 mg) of the control or infected samples were mixed with 1.5 mL of 80% methanol and homogenized in a cooled ultrasonic bath for 30 min. Extracts were centrifuged at 10,000 rpm for 10 min at 4 °C and filtered through a 0.20 μm membrane filter (Macherey-Nagel, Düren, Germany) in vials before injection into the HPLC system.
The used standards and HPLC system conditions for phenolic compound quantification were the same as those described by Mikulic-Petkovsek et al. [62]. Phenolic compounds were analyzed using a Thermo Finnigan Surveyor HPLC system (Thermo Scientific, San Jose, CA, USA) with a diode-array detector (DAD) at 280 and 350 nm. Flavanols (epicatechin, catechin, procyanidins, etc.) and hydroxycinnamic acid derivatives (chlorogenic, p-coumaric, ferulic, caffeic acid, etc.) were detected at 280 nm, whereas flavonol derivatives (kaempferol, quercetin, etc.) were detected at 350 nm. Phenolic compounds were identified by comparison of UV–vis spectra and the retention times of phenolics and standards, and confirmed with a mass spectrometer (Thermo Scientific, LCQ Deca XP MAX, Waltham, USA) with electrospray ionization (ESI) operating in negative ion mode. Mass-spectrometer conditions were the same as those reported by Mikulic-Petkovsek et al. [13]. Concentrations of phenolic compounds were calculated from the peak areas and expressed as µg g−1 fresh weight (FW).

Data were analyzed using an R software environment for statistical computing [63] and R package agricolae [64].
One-way ANOVA and Duncan’s post hoc test were used to analyze differences in the relative amounts of V. nonalfalfae DNA (ΔCt) between the root samples of both cultivars at different sampling times. To analyze differences in the relative amounts of fungal DNA (ΔCt) between stem samples, the Kruskal–Wallis rank-sum test and the Holm–Bonferroni method were performed, since the data did not meet the assumption of normality and homogeneity of the variance. Statistically significant differences between root and stem samples were tested at p ≤ 0.05.
One-way ANOVA was performed to determine the significance of V. nonalfalfae infection on individual phenolic compounds and on the total amount of each phenolic class (flavanols, flavonols, and hydroxycinnamic acids) in the root and stem tissues, respectively. Differences in the amounts of each phenolic compound between samples were tested by Duncan’s test at the significance level of p ≤ 0.05. Results were presented as the average content of individual phenolic compounds per 1 g of fresh-weight sample (µg g–1 FW) with standard deviation (SD). Different letters denote significant differences at p ≤ 0.05 (Tables S1–S3). To compare the phenolic contents among sampling times and cultivars, infected samples were normalized to the corresponding controls, and one-way ANOVA and Duncan’s test (p ≤ 0.05) were performed (Tables S1.1, S2.1 and S3.1).

The pattern of the phenolic compounds (individual and total) in the roots showed that there were no differences between the control and infected samples in the susceptible cultivar; in the resistant cultivar, a significant increase in total flavanols was observed at 3 dpi in the infected compared to the control root samples. This suggested that flavanols may be involved in defense responses in the roots of the resistant cultivar, thereby helping to prevent infection.
In response to infection in the stems, the contents of six different individual flavanols, four flavonols, and six hydroxycinnamic acids changed between sampling times in both cultivars. Considering temporal changes in the amount of phenolic compounds, we observed less extensive accumulation in the stem tissue of the resistant cultivar, since flavanols and hydroxycinnamic acids accumulated only at 3 dpi. However, in the susceptible cultivar, we observed accumulation of phenolic compounds in additional sampling points, namely, flavanols at 1 and 3 dpi, flavonols at 3 and 15 dpi, and hydroxycinnamic acids at 1 and 3 dpi. Additionally, in comparison with the resistant cultivar, the susceptible cultivar showed significant increases in flavonols in the stems at 3 and 15 dpi and hydroxycinnamic acids at 6 dpi.
As already mentioned, the extensive accumulation of cell-wall-bound phenolic compounds in the stems of the susceptible cultivar could lead to a complete sealing of the xylem vessels and to drought stress, which may contribute to the death of susceptible hop plants.
These data suggested that phenolic compounds might be involved in the defense reactions of hop plants against V. nonalfalfae, especially in the roots of resistant and in the stems of susceptible hop cultivars. The results of our study substantiate the interest to investigate the mode of action of individual phenolic compounds that accumulate differently during the pathogenesis of Verticillium wilt. 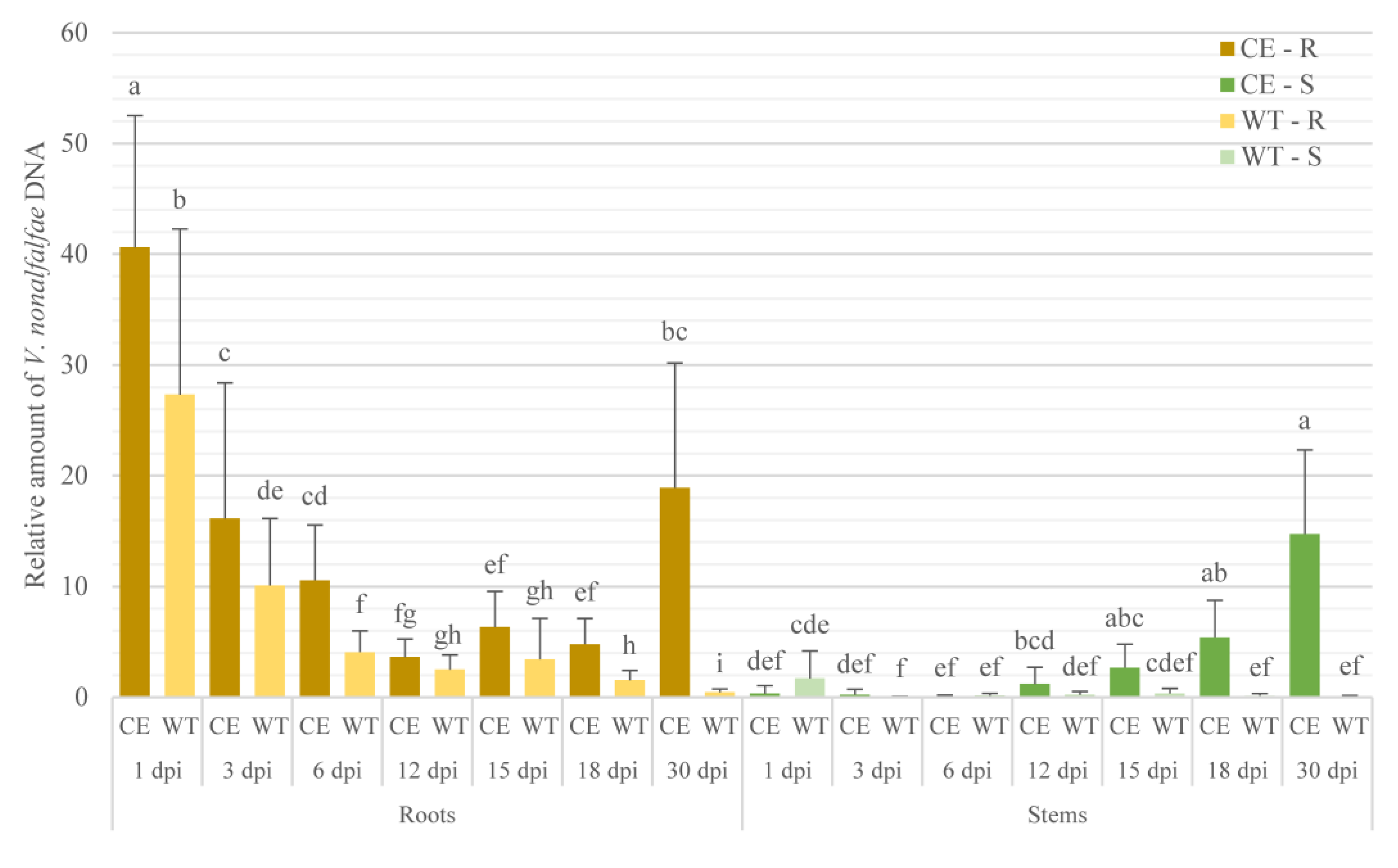 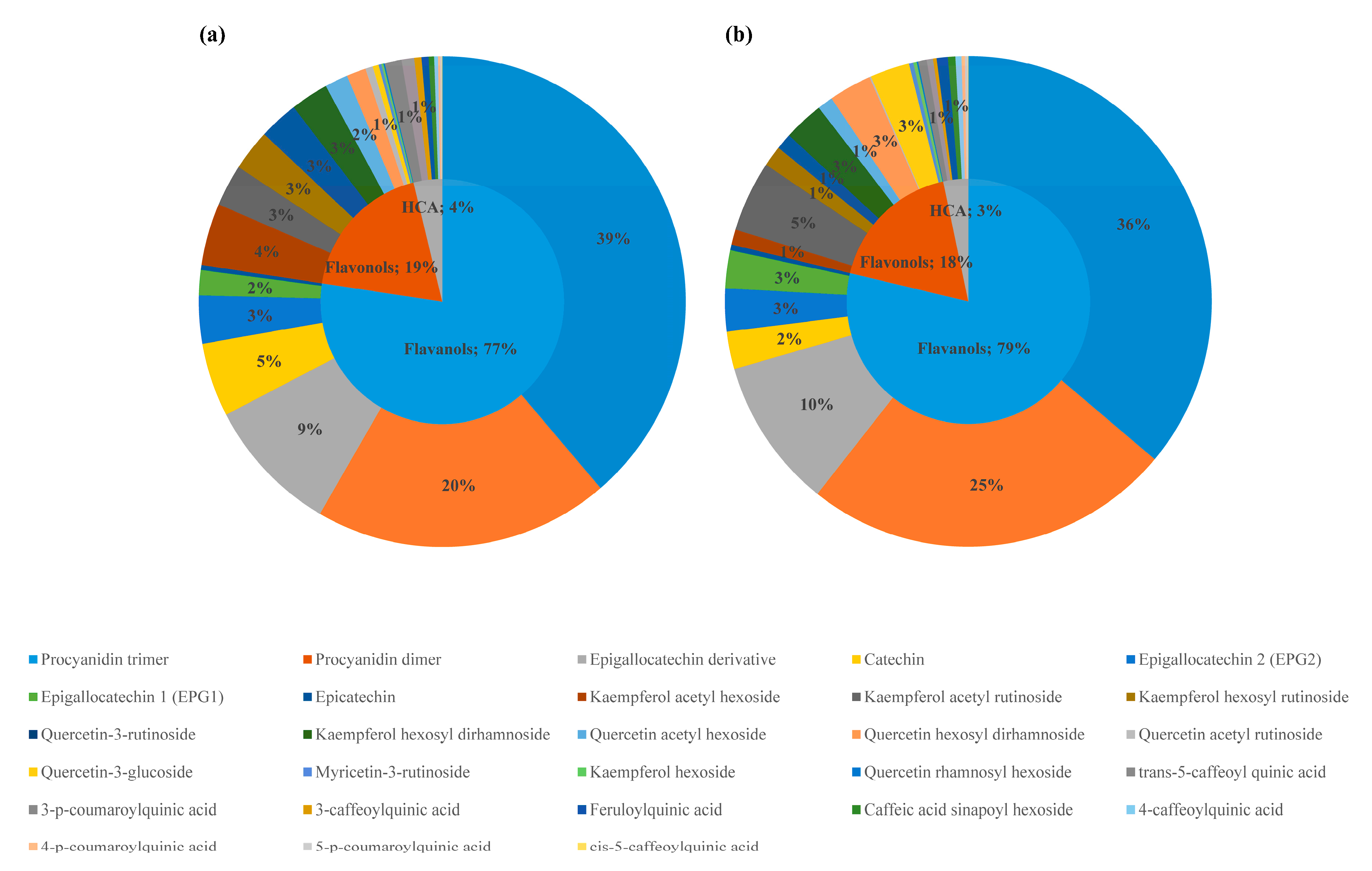