Barley’s Second Spring as a Model Organism for Chloroplast Research

Barley (Hordeum vulgare) has been widely used as a model crop for studying molecular and physiological processes such as chloroplast development and photosynthesis. During the second half of the 20th century, mutants such as albostrians led to the discovery of the nuclear-encoded, plastid-localized RNA polymerase and the retrograde (chloroplast-to-nucleus) signalling communication pathway, while chlorina-f2 and xantha mutants helped to shed light on the chlorophyll biosynthetic pathway, on the light-harvesting proteins and on the organization of the photosynthetic apparatus. However, during the last 30 years, a large fraction of chloroplast research has switched to the more “user-friendly” model species Arabidopsis thaliana, the first plant species whose genome was sequenced and published at the end of 2000. Despite its many advantages, Arabidopsis has some important limitations compared to barley, including the lack of a real canopy and the absence of the proplastid-to-chloroplast developmental gradient across the leaf blade. These features, together with the availability of large collections of natural genetic diversity and mutant populations for barley, a complete genome assembly and protocols for genetic transformation and gene editing, have relaunched barley as an ideal model species for chloroplast research. In this review, we provide an update on the genomics tools now available for barley, and review the biotechnological strategies reported to increase photosynthesis efficiency in model species, which deserve to be validated in barley. View Full-Text
Keywords: barley; genome; functional genomics; chloroplast biogenesis; photosynthesis improvement barley; genome; functional genomics; chloroplast biogenesis; photosynthesis improvement
►▼ Show Figures 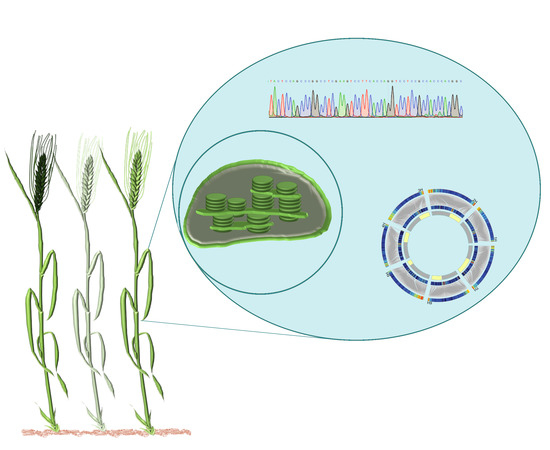