Artificial light supplementation is widely used in modern agriculture. Due to their numerous advantages, light emitting diodes (LEDs) are widely used to effectively increase the yield or control the development of crops. In the present study, the effects of supplementary morning lighting (SML) with LEDs on the physiology and stomatal characteristics of strawberry plants were studied, with the aim of awakening the plant guard cells before sunrise and enabling strawberry plants to efficiently photosynthesize immediately after sunrise. Young daughter plants of ‘Maehyang’ and ‘Seolhyang’ strawberry cultivars that have just rooted were grown under LEDs with different wavelengths—white (W), red (R), mixed blue and red (BR, 1:1), and blue (B)—to investigate the effects of the SML on the physiology, stomatal characteristics, and growth. The SML was provided for 2 h at an intensity of 100 μmol·m−2·s−1 PPFD before sunrise every morning. A group without supplementary lighting was set as the control. The results showed that the different SML qualities have significantly affected the stomatal characteristics. The B SML promoted the stomatal opening more effectively compared to the other SMLs. The stomatal conductance and quantum yield (Fv/Fm) of leaves treated with the SMLs were higher than those of the control group. The B and BR SMLs most significantly affected the stomatal conductance and quantum yield (Fv/Fm). After 30 days of the SML treatments, it was observed that the B SML effectively improved the plant quality, chlorophyll content, and carbohydrate accumulation in the two strawberry cultivars. In general, a short-term exposure to blue light before sunrise can effectively improve the quality and promote the production of strawberry plants. View Full-Text
Keywords: chlorophyll; guard cell; light quality; LEDs chlorophyll; guard cell; light quality; LEDs
►▼ Show Figures 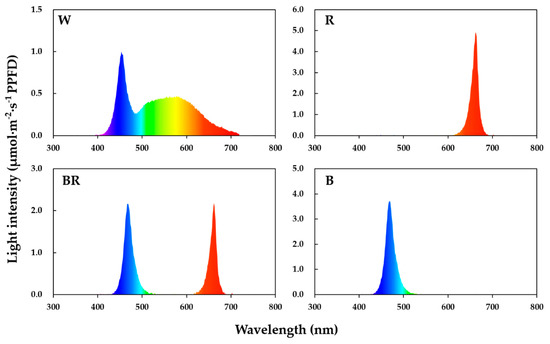