A comparative study of the leaf micromorphology of Korean Piperales, including medicinal materials, was performed through light microscopy and scanning electron microscopy, to evaluate their taxonomic significance. Piperales possessed both amphistomatic and hypostomatic leaves. The epidermal area ranged from 38 to 5077 μm2, and the stomatal area ranged from 201 to 2129 μm2. The stomatal index on the abaxial surface was higher than that on the abaxial surface. Anomocytic stomata occurred most commonly, but actinocytic, anisocytic, tetracytic, and staurocytic stomata were also found in certain taxa. Secretory idioblasts were found on all taxa studied except Aristolochia. Three main types of trichomes were defined—(1) glandular trichome; (2) simple multicellular trichome; and (3) two-armed multicellular Y-shaped trichome. Although the quantitative data on its own had somewhat limited taxonomic value, the various qualitative characteristics (e.g., epidermal surfaces, stomata types and positions, trichome types and density, and secretory idioblast types) had great taxonomic value. These characteristics might be taxonomically relevant and useful for developing an identification key. Additionally, we evaluated and supported the previous taxonomic system of Korean Asarum, using leaf micromorphological characteristics. Finally, through the application for authentication of herbal medicine, we revealed that leaf micromorphological characteristics can be used for accurate authentication. View Full-Text
Keywords: Asarum; herbal medicine; leaf epidermis; Piper; scanning electron microscopy; stomatal index; trichomes Asarum; herbal medicine; leaf epidermis; Piper; scanning electron microscopy; stomatal index; trichomes
►▼ Show Figures 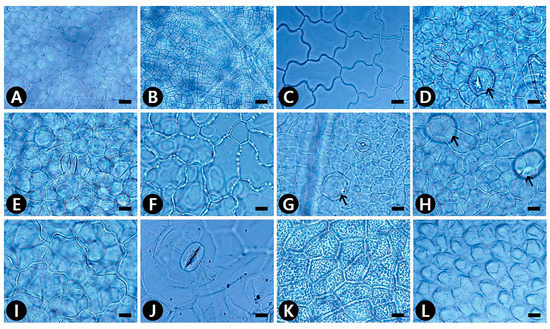