Onion (Allium cepa L.) is the second most important vegetable crop worldwide and is widely appreciated for its health benefits. Despite its significant economic importance and its value as functional food, onion has been poorly investigated with respect to its genetic diversity. Herein, we surveyed the genetic variation in the “Acquaviva red onion” (ARO), a landrace with a century-old history of cultivation in a small town in the province of Bari (Apulia, Southern of Italy). A set of 11 microsatellite markers were used to explore the genetic variation in a germplasm collection consisting of 13 ARO populations and three common commercial types. Analyses of genetic structure with parametric and non-parametric methods highlighted that the ARO represents a well-defined gene pool, clearly distinct from the Tropea and Montoro landraces with which it is often mistaken. In order to provide a description of bulbs, usually used for fresh consumption, soluble solid content and pungency were evaluated, showing higher sweetness in the ARO with respect to the two above mentioned landraces. Overall, the present study is useful for the future valorization of the ARO, which could be promoted through quality labels which could contribute to limit commercial frauds and improve the income of smallholders. View Full-Text
Keywords: SSR markers; onion landraces; genetic diversity; morphological and quality traits SSR markers; onion landraces; genetic diversity; morphological and quality traits
►▼ Show Figures 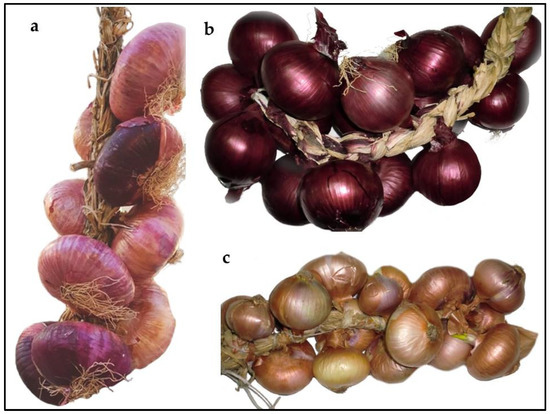