The DOF Transcription Factors in Seed and Seedling Development

The DOF (DNA binding with one finger) family of plant-specific transcription factors (TF) was first identified in maize in 1995. Since then, DOF proteins have been shown to be present in the whole plant kingdom, including the unicellular alga Chlamydomonas reinhardtii. The DOF TF family is characterised by a highly conserved DNA binding domain (DOF domain), consisting of a CX2C-X21-CX2C motif, which is able to form a zinc finger structure. Early in the study of DOF proteins, their relevance for seed biology became clear. Indeed, the PROLAMIN BINDING FACTOR (PBF), one of the first DOF proteins characterised, controls the endosperm-specific expression of the zein genes in maize. Subsequently, several DOF proteins from both monocots and dicots have been shown to be primarily involved in seed development, dormancy and germination, as well as in seedling development and other light-mediated processes. In the last two decades, the molecular network underlying these processes have been outlined, and the main molecular players and their interactions have been identified. In this review, we will focus on the DOF TFs involved in these molecular networks, and on their interaction with other proteins. View Full-Text
Keywords: DOF proteins; seed germination; DELLA proteins; seed maturation; seedling development DOF proteins; seed germination; DELLA proteins; seed maturation; seedling development
►▼ Show Figures 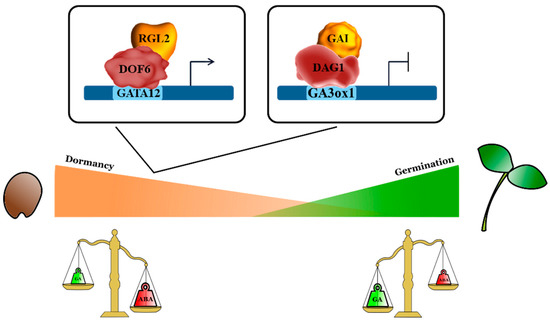