Recommendations for near-natural plant growth under indoor conditions have been described without considering environmental fluctuations, which might have important consequences for researchers and plant producers when comparing results from indoor facilities with natural ecosystems or production. Previous authors proposed that differences in temperature, light quantity, and the lack of their variation are sources of deviations between indoor and outdoor experiments. Here, we investigated the effect of fluctuating light, temperature, and humidity in an indoor environment on plant performance. Seven plant species from different functional plant types were grown outdoors during summer and spring. The same species were then grown in indoor growth chambers under different scenarios of climate complexity in terms of fluctuations of temperature, air humidity, and light: (1) fixed night and day conditions, (2) daily sinusoidal changes, and (3) variable conditions tracking the climate records from the field trials. In each scenario, the average of the environmental variables was the same as in the respective field trial. Productivity-, gas exchange-, and leaf pigment-traits were measured in all plants at the end of the experiments. The plant trait responses were highly dependent on species and treatment, but general trends were observed. The variable condition yielded lower biomass compared to the fixed and sinusoidal conditions, together with a higher specific leaf area and increased chlorophyll concentrations. A principal component analysis (PCA) across all plant traits in response to climatic conditions suggested that at least a sinusoidal fluctuation is recommended for a more natural-like plant performance in indoor growth facilities. However, prevailing significant differences for several traits between field- and indoor-grown plants even under variable climates indicate that additional factors other than those controllable in standard phytotrons (e.g., wind speed and direction, leaf and soil temperature) can still significantly bias plant performance in indoor facilities. View Full-Text
Keywords: dynamic light; dynamic temperature; natural growth; controlled environment dynamic light; dynamic temperature; natural growth; controlled environment
►▼ Show Figures 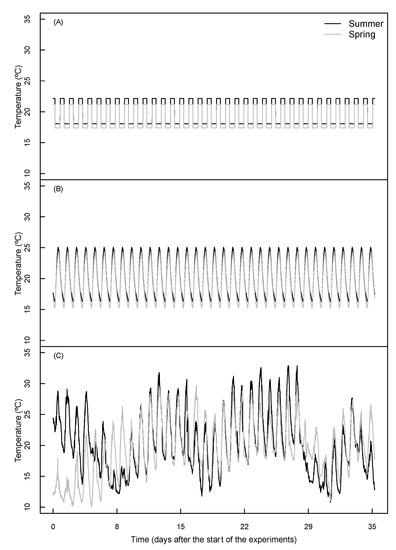