Which Traits Make Weeds More Successful in Maize Crops? Insights from a Three-Decade Monitoring in France
Previous Article in Journal

Somatic embryogenesis during oil palm tissue culture is a long process. The identification of the proteins that control this process may help to shorten the time of oil palm tissue culture. We collected embryogenic callus and somatic embryos at the globular, torpedo, and cotyledon maturation stages, as well as from plantlets, for total protein extraction. An enrichment column was used to enrich the phosphoproteins, which were subjected to tryptic enzyme digestion. Each sample was analyzed with nano-liquid chromatography–tandem mass spectrometry (nano LC-MS/MS). A total of 460 phosphoproteins were identified and analyzed. The functional characterization of phosphoproteins were observed as highest in the metabolic process, protein/nucleotide/ion binding, and membrane component. The different phosphoproteins are involved in the control of vegetative growth, cellular differentiation, cell morphogenesis, and signaling roles in plants. The Quantitative Real-Time Reverse Transcription-PCR technique (qPCR) was successfully used to verify the expression of genes, and the results were consistent with the level of protein expression from nano-LC-MS/MS. The E3 ubiquitin-protein ligase and sister chromatid cohesion PDS5 were specifically expressed only in the somatic embryo and plantlet, and these could be used as protein biomarkers to determine the oil palm somatic embryo maturation stage. This study sheds light on the protein phosphorylation mechanism that regulates somatic embryogenesis transition during oil palm tissue culture. View Full-Text
Keywords: micropropagation; Elaeis guineensis; proteomics; nano-liquid chromatography–tandem mass spectrometry micropropagation; Elaeis guineensis; proteomics; nano-liquid chromatography–tandem mass spectrometry
►▼ Show Figures 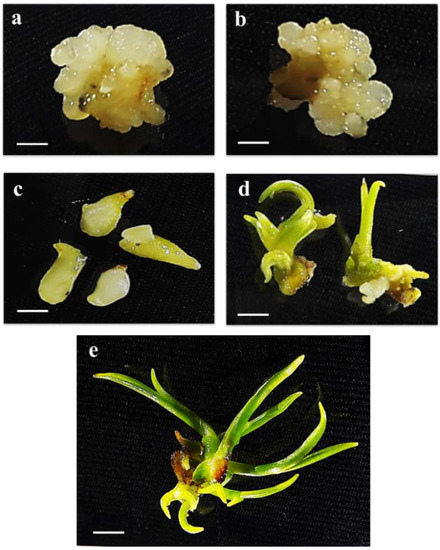