Yield, Quality and Antioxidant Properties of Indian Mustard (Brassica juncea L.) in Response to Foliar Biofortification with Selenium and Iodine
Next Article in Special Issue

Progress toward Understanding the Molecular Basis of Fruit Response to Hypoxia

The chemical composition of winter savory, peppermint, and anise essential oils, and in vitro and in vivo phytotoxic activity against weeds (Portulaca oleracea, Lolium multiflorum, and Echinochloa crus-galli) and food crops (maize, rice, and tomato), have been studied. Sixty-four compounds accounting for between 97.67–99.66% of the total essential oils were identified by Gas Chromatography-Mass Spectrometry analysis. Winter savory with carvacrol (43.34%) and thymol (23.20%) as the main compounds produced a total inhibitory effect against the seed germination of tested weed. Menthol (48.23%), menthone (23.33%), and iso-menthone (16.33%) from peppermint only showed total seed germination inhibition on L. multiflorum, whereas no significant effects were observed with trans-anethole (99.46%) from anise at all concentrations (0.125–1 µL/mL). Low doses of peppermint essential oil could be used as a sustainable alternative to synthetic agrochemicals to control L. multiflorum. The results corroborate that in vivo assays with a commercial emulsifiable concentrate need higher doses of the essential oils to reproduce previous in vitro trials. The higher in vivo phytotoxicity of winter savory essential oil constitutes an eco-friendly and less pernicious alternative to weed control. It is possible to achieve a greater in vivo phytotoxicity if less active essential oil like peppermint is included with other active excipients.
Keywords: winter savory; peppermint; essential oils; food crops; weed control; phytotoxicity winter savory; peppermint; essential oils; food crops; weed control; phytotoxicity

2.3. Seed Germination and Seedling Growth Inhibition of P. oleracea, L. multiflorum, and E. crus-galli, and Maize, Rice, and Tomato with an Emulsifiable Concentrate Including Winter Savory or Peppermint Essential Oils

The phytotoxic effect exhibited by winter savory and peppermint essential oils in in vitro trials were corroborated by in vivo conditions using two different emulsifiable concentrates elaborated by SEIPASA, a pioneer Spanish Company in the development, manufacturing, and marketing of environmentally friendly agro-inputs in order to produce healthy food.
The results of the emulsifiable concentrate containing a final dose of 5 or 10 µL/mL of essential oil were compared with a control watered with water and a blank without the corresponding essential oils.
The emulsifiable concentrate of winter savory succeeded in inhibiting the seed germination of P. oleracea within 33 days at both concentrations, corroborating the previous in vitro results in which there was also total inhibition of the weed germination of common purslane (Table 2).
Despite L. multiflorum and E. crus-galli being more tolerant species in in vivo conditions, the emulsifiable concentrate of winter savory also significantly inhibited their seed germination, with percentages of 95–100% and 82–99% at 5 and 10 µL/mL, and without a significant effect with the blank (Figure 3). Similar results were found for hypocotyl growth (Figure 4), making the formulate with winter savory essential oil an ecological alternative to synthetic herbicides, which have already demonstrated a detrimental influence on the environment, crops, and human health.
Regarding peppermint essential oil, due to the less phytotoxical effect, it was emulsified with other herbicidal compounds (blank use by SEIPASA Company) and the formulate was able to inhibit the seed germination of the three weeds in a dose-dependent manner, with percentages between 77–100% for P. oleracea, 90–95% against E. crus-galli, and total inhibition over L. multiflorum, corroborating the in vitro results in which peppermint essential oil was more active against L. multiflorum than P. oleracea and E. crus-galli.
According to the herbicidal effect of the emulsifiable concentrate of winter savory, a new set of trials was carried out with this formulate and three food crops. Unfortunately, a total seed germination inhibition was obtained with maize and rice, and between 80 and 98% of the tomato was inhibited at 5 and 10 µL/mL, respectively, with no significant effect with the blank (Figure 5).

The phenolic compounds carvacrol (43.34 ± 0.09%) and thymol (23.20 ± 0.06%) were the main compounds identified in the winter savory essential oil analysed here. It is well-known that the strong spicy flavour of winter savory is determined by the prevailing carvacrol/thymol chemotype [33], which is variable in relation to the stage of development of the plant, harvesting time, and field environment conditions, including circumstances such as a variation in altitude: in fact, a higher content of linalool and other compounds found here in lower quantities (Table 1), such as terpinen-4-ol (1.04 ± 0.01%) and sabinene hydrate (0.20 ± 0.01%), has been detected in higher amounts in S. montana essential oil at a higher altitude, while both the major ones identified here, carvacrol and thymol, were quantified in lower percentages [34].
Apart from that, these phenolic compounds found in winter savory essential oil are considered the main bioactive monoterpenes that provide S. montana with a wide range of pharmacological and biological properties, such as natural antimicrobial activity [35] against gram-positive (Staphylococcus aureus and Bacillus cereus) and gram-negative bacteria (Salmonella infantis and Escherichia coli O157:H7) [36] that is useful in the treatment of foodborne diseases, as well as anti-inflammatory activity for certain transcription factors [37]. Furthermore, recently, some new thymol and carvacrol derivatives, including the carbamate moiety, have been synthesized with stronger inhibitory effects on acetylcholinesterase [38]. Related to their phytotoxicity, both carvacrol and thymol have shown total suppression of the seed germination and seedling growth of Amaranthus retroflexus, Chenopodium album, and Rumex crispus [39], coinciding with our authors [27] and also with previous [40] studies, in which oregano essential oil with 60.42% of carvacrol exhibited a total inhibition of P. oleracea, L. multiflorum, and E. crus-galli at the same in vitro doses assayed. These results indicate that winter savory is an effective broad-spectrum herbicide as it occurs with glyphosate that also exerts inhibitory effects on the seed germination of crops, such as wheat (Triticum durum L.), pea (Pisum sativum L.), lettuce (Latuca sativa L.) [41], and even trees, for instance Pinus pinaster, in which it is able to induce in vitro shoot chlorosis and drooping [42]. So, this formulate could be an alternative to glyphosate with less environmental and human health problems.
Several researches corroborate that the biological properties of peppermint essential oil are due to its chemical composition, especially its major components menthol, menthone, and iso-menthone [43,44], conferring the high percentage of menthol to peppermint essential oil immunostimulant effects in animals [45] and the herbicidal effect in Mediterranean weed, such as Amaranthus retroflexus L., Solanum nigrum L., and P. oleracea under controlled conditions [46]. The results obtained convert peppermint essential oil into a sustainable alternative that can solve the recent L. multiflorum resistance to glyphosate on rice paddy leaves [47]. Not only do our results match with other studies in reference to larger compounds, but also in reference to smaller ones, such as E-nerolidol, spathulenol, and caryophyllene oxide, which were the only oxygenated sesquiterpenes identified in peppermint essential oil [48,49].
Finally, although trans-anethole, the main compound in commercial anise essential oil (99.46 ± 0.05%) analysed here and in other previous works [50] has demonstrated strong antifungal activity through the inhibition of the mycelial growth of a wide range of fungi [51] and could be used as a preservative in food preparation and processing [49], our results together with other research [52] revealed no significant phytotoxic activity against seed germination of selected weed.

The individual compounds were identified by MS and their identity was confirmed by a comparison with their Kovat’s retention index calculated using co-chromatographed standard hydrocarbons relative to C8–C32 n-alkanes, and mass spectra with reference samples or with data already available in the NIST 2005 mass spectral library and in the literature [53].

Sets of 20 seeds (10 for maize), each with five replicates (ten replicate in maize) per treatment, were homogenously distributed in Petri dishes (9 cm diameter) between two layers of filter paper (Whatman No.1) moistened with 4 mL of distilled water and with 0 (control), 0.125, 0.250, 0.5, and 1 µL/mL of winter savory, peppermint, and anise essential oils. Petri dishes were sealed with parafilm and incubated in a germination chamber Equitec EGCS 301 3SHR model, according to previous assays [54], alternating between 30.0 ± 0.1 °C 16 h in light and 20.0 ± 0.1 °C 8 h in dark, with (E. crus-galli, maize, and rice) and without (P.oleracea, L. multiflorum, and tomato) humidity. To evaluate the herbicidal activity of the essential oils, the number of germinated seeds was counted and compared with those of untreated seedlings. Emergence of the radicle (≥1 mm) was used as an index of germination and seedling length (hypocotyl and/or radicle) data were recorded after 3, 5, 7, 10, and 14 days in each replicate.

Ten seeds of each species (P. oleracea, L. multiflorum, E. crus-galli, maize, rice, and tomato) with ten replicates per treatment were randomly chosen and placed in pods (9 cm diameter) with 40 g of substrate. They were place less than 1 cm below Substrate Projar Professional containing coir and peat make, fertilizer N-P-K: 14 + 16 + 18 + micronutrients, and dolomitic limestone with a sorption capacity of 183 g/10 min. A set of 10 pods was watered on the first day with 20 mL of water (control), 20 mL commercial products (Nosbur OE 12 NS (32% w/w), Emulson AG/CAL/E (7% w/w), Emulson CO 36 (13% w/w) or Emulson AG/CAL/E (2.2% w/w), Alpicare 410H (21.7% w/w), Emulson AG/7720/A (2.6% w/w) respectively) without essential oils (blank), and 20 mL of emulsifiable concentrate with winter savory (48% w/w) or peppermint essential oil (73.5 % w/w) at 5 and 10 µL/mL. A tray was used every five pods to hold and separate them when watering. In order to prevent leaching, the pods were covered with plastic film. Over a period of 33 or 20 days (winter savory or peppermint), each tray was watered with 250 mL of water every two days. The greenhouse conditions were: 23.3 °C average indoor temperature, 18.1 °C minimum indoor temperature, 29.7 °C maximum indoor temperature, 57.2% average humidity, 80.9 µmol/m2/s PAR (Photo Active Radiation), and 135.6 W/m2 intensity of radiation.
To evaluate the herbicidal effect, the number of germinated seeds in 5 µL /mL and 10 µL /mL pod trays was counted and compared with those of control and blank samples. Emergence of the hypocotyl (≥1 mm) was used as an index of germination and seedling length data were recorded every two days, coinciding with watering days over 33 or 20 days.

Experiments were conducted with five replicates and ten replicates in vitro and in vivo, respectively. Data were subjected to one-way analysis of variance (ANOVA) with SPSS statistics 22 software. Tukey’s post hoc test was used when variances remained homogeneous (Levene’s test) and T3 Dunnett’s post hoc one was employed if not, assuming equal variances. Differences were considered to be significant at p ≤ 0.05.

The authors thank the Chief Research Officer at SEIPASA, Francisco Espinosa Escrig, for carrying out the stability tests and providing the emulsifiable concentrates of winter savory and peppermint essential oils for in vivo assays and the Central Service for Experimental Research of the University of Valencia (SCSIE) for providing the Greenhouse and Gas Chromatography- Mass Spectrometry equipment. 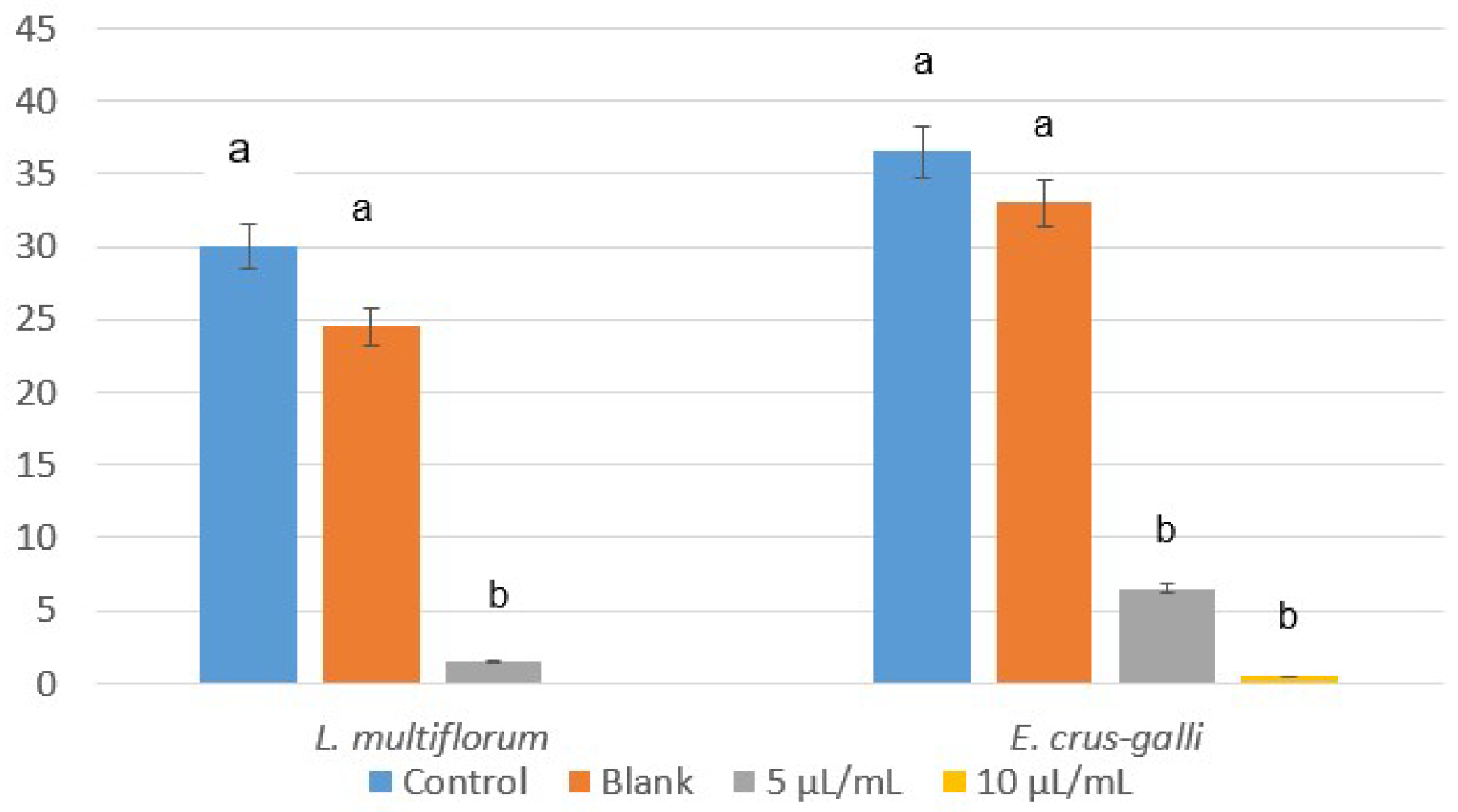 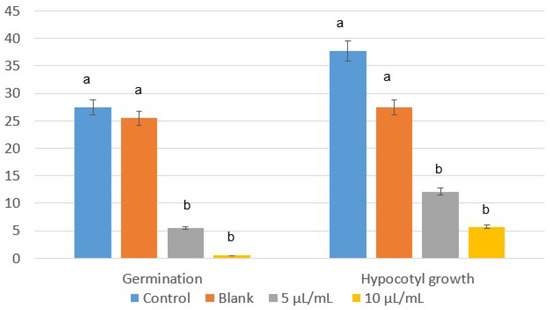