Immunomodulatory and Inhibitory Effect of Immulina®, and Immunloges® in the Ig-E Mediated Activation of RBL-2H3 Cells. A New Role in Allergic Inflammatory Responses
Previous Article in Journal

Seeds of three C3 and one C4 annual weedy species were collected from agricultural fields in Beltsville, Maryland in 1966 and 2006, when atmospheric CO2 concentrations averaged about 320 and 380 mol mol−1, respectively. Plants from each collection year were grown over a range of CO2 concentrations to test for adaptation of these weedy species to recent changes in atmospheric CO2. In all three of the C3 species, the increase in CO2 concentration from 320 mol mol−1 to 380 mol mol−1 increased total dry mass at 24 days in plants from seeds collected in 2006, but not in plants from seeds collected in 1966. Shoot and seed dry mass at maturity was greater at the higher growth CO2 in plants collected in 2006 than in 1966 in two of the species. Down-regulation of photosynthetic carboxylation capacity during growth at high CO2 was less in the newer seed lots than in the older in two of the species. Overall, the results indicate that adaptation to recent changes in atmospheric CO2 has occurred in some of these weedy species. View Full-Text
Keywords: CO2; adaptation; photosynthesis; growth; weeds; carboxylation efficiency CO2; adaptation; photosynthesis; growth; weeds; carboxylation efficiency
►▼ Show Figures 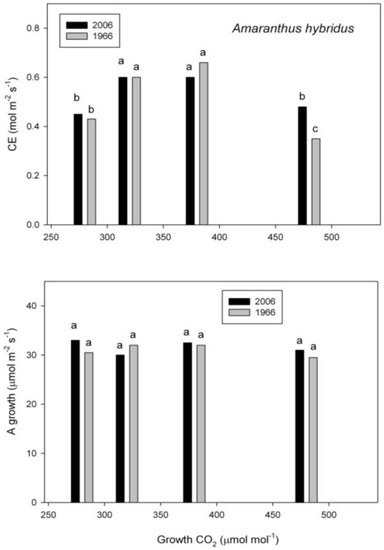