Comparative analyses of phenotypic and molecular traits of Arabidopsis thaliana grown under standardised conditions is still a challenge using climatic devices supplied with common light sources. These are in most cases fluorescent lights, which have several disadvantages such as heat production at higher light intensities, an invariable spectral output, and relatively rapid “ageing”. This results in non-desired variations of growth conditions and lowers the comparability of data acquired over extended time periods. In this study, we investigated the growth behaviour of Arabidopsis Col0 under different light conditions, applying fluorescent compared to LED lamps, and we conducted physiological as well as gene expression analyses. By changing the spectral composition and/or light intensity of LEDs we can clearly influence the growth behaviour of Arabidopsis and thereby study phenotypic attributes under very specific light conditions that are stable and reproducible, which is not necessarily given for fluorescent lamps. By using LED lights, we can also roughly mimic the sun light emission spectrum, enabling us to study plant growth in a more natural-like light set-up. We observed distinct growth behaviour under the different light regimes which was reflected by physiological properties of the plants. In conclusion, LEDs provide variable emission spectra for studying plant growth under defined, stable light conditions. View Full-Text
Keywords: Arabidopsis; light quality; LED; phenotype; gene expression Arabidopsis; light quality; LED; phenotype; gene expression
►▼ Show Figures 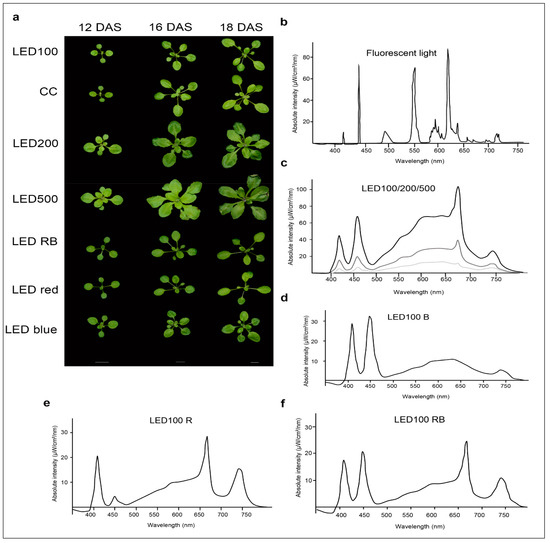