Seed Biofortification and Phytic Acid Reduction: A Conflict of Interest for the Plant?
Previous Article in Special Issue

Magnesium ions (Mg2+) are the second most abundant cations in living plant cells, and they are involved in various functions, including photosynthesis, enzyme catalysis, and nucleic acid synthesis. Low availability of Mg2+ in an agricultural field leads to a decrease in yield, which follows the appearance of Mg-deficient symptoms such as chlorosis, necrotic spots on the leaves, and droop. During the last decade, a variety of physiological and molecular responses to Mg2+ deficiency that potentially link to leaf senescence have been recognized, allowing us to reconsider the mechanisms of Mg2+ deficiency. This review focuses on the current knowledge about the physiological responses to Mg2+ deficiency including a decline in transpiration, accumulation of sugars and starch in source leaves, change in redox states, increased oxidative stress, metabolite alterations, and a decline in photosynthetic activity. In addition, we refer to the molecular responses that are thought to be related to leaf senescence. With these current data, we give an overview of leaf senescence induced by Mg deficiency. View Full-Text
Keywords: leaf senescence; magnesium deficiency; transpiration leaf senescence; magnesium deficiency; transpiration
►▼ Show Figures 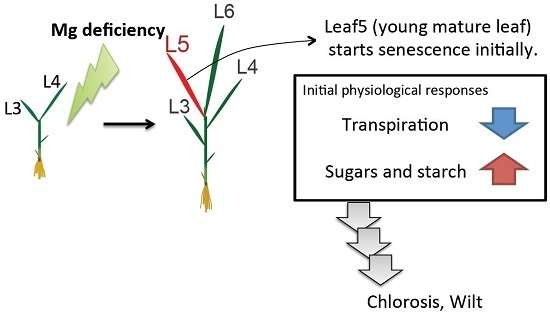