Adnate Leaf-Base and the Origin of Ribs in Succulent Stems of Euphorbia L.
Previous Article in Journal

The obligate hemiparasite Striga hermonthica is one of the major global biotic threats to agriculture in sub-Saharan Africa, causing severe yield losses of cereals. The germination of Striga seeds relies on host-released signaling molecules, mainly strigolactones (SLs). This dependency opens up the possibility of deploying SL analogs as “suicidal germination agents” to reduce the accumulated seed bank of Striga in infested soils. Although several synthetic SL analogs have been developed for this purpose, the utility of these compounds in realizing the suicidal germination strategy for combating Striga is still largely unknown. Here, we evaluated the efficacy of three potent SL analogs (MP3, MP16, and Nijmegen-1) under laboratory, greenhouse, and farmer’s field conditions. All investigated analogs showed around a 50% Striga germination rate, equivalent to a 50% reduction in infestation, which was comparable to the standard SL analog GR24. Importantly, MP16 had the maximum reduction of Striga emergence (97%) in the greenhouse experiment, while Nijmegen-1 appeared to be a promising candidate under field conditions, with a 43% and 60% reduction of Striga emergence in pearl millet and sorghum fields, respectively. These findings confirm that the selected SL analogs appear to make promising candidates as simple suicidal agents both under laboratory and real African field conditions, which may support us to improve suicidal germination technology to deplete the Striga seed bank in African agriculture. View Full-Text
Keywords: germination stimulant; witchweed; methyl phenlactonoates (MPs); Nijmegen-1; weed germination stimulant; witchweed; methyl phenlactonoates (MPs); Nijmegen-1; weed
►▼ Show Figures 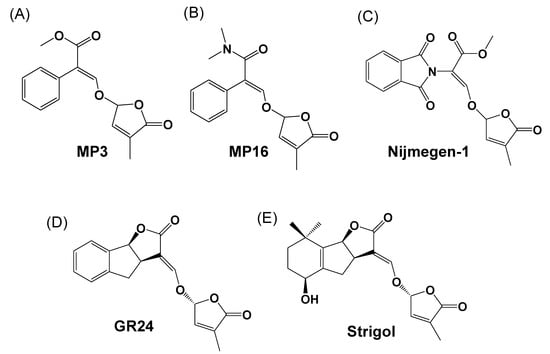