The response of carbon fixation in C3 plants to elevated CO2 is relatively larger when photosynthesis is limited by carboxylation capacity (VC) than when limited by electron transport (J). Recent experiments under controlled, steady-state conditions have shown that photosynthesis at elevated CO2 may be limited by VC even at limiting PPFD. These experiments were designed to test whether this also occurs in dynamic field environments. Leaf gas exchange was recorded every 5 min using two identical instruments both attached to the same leaf. The CO2 concentration in one instrument was controlled at 400 μmol mol−1 and one at 600 μmol mol−1. Leaves were exposed to ambient sunlight outdoors, and cuvette air temperatures tracked ambient outside air temperature. The water content of air in the leaf cuvettes was kept close to that of the ambient air. These measurements were conducted on multiple, mostly clear days for each of three species, Glycine max, Lablab purpureus, and Hemerocallis fulva. The results indicated that in all species, photosynthesis was limited by VC rather than J at both ambient and elevated CO2 both at high midday PPFDs and also at limiting PPFDs in the early morning and late afternoon. During brief reductions in PPFD due to midday clouds, photosynthesis became limited by J. The net result of the apparent deactivation of Rubisco at low PPFD was that the relative stimulation of diurnal carbon fixation at elevated CO2 was larger than would be predicted when assuming limitation of photosynthesis by J at low PPFD. View Full-Text
Keywords: photosynthesis; elevated CO2; Rubisco; electron transport; light; diurnal cycle photosynthesis; elevated CO2; Rubisco; electron transport; light; diurnal cycle
►▼ Show Figures 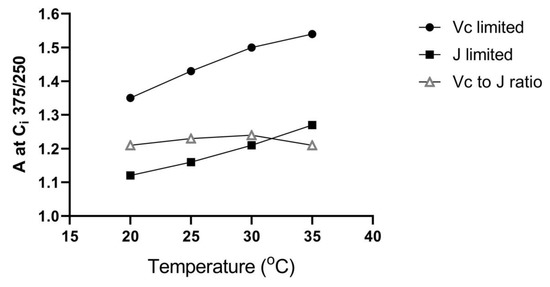