Plants of the Spontaneous Flora with Beneficial Action in the Management of Diabetes, Hepatic Disorders, and Cardiovascular Disease
Previous Article in Journal

New Eudesmane-Type Sesquiterpene Glycosides from the Leaves of Aster koraiensis

Osteoarthritis (OA) is an age-related joint disease and one of the most common degenerative bone diseases among elderly people. The currently used therapeutic strategies relying on nonsteroidal anti-inflammatory drugs (NSAIDs) and steroids for OA are often associated with gastrointestinal, cardiovascular, and kidney disorders, despite being proven effective. Aucklandia lappa is a well-known traditional medicine. The root of A. lappa root has several bioactive compounds and has been in use as a natural remedy for bone diseases and other health conditions. We evaluated the A. lappa root extracts on OA progression as a natural therapeutic agent. A. lappa substantially reduced writhing numbers in mice induced with acetic acid. Monosodium iodoacetate (MIA) was injected into the rats through their knee joints of rats to induce experimental OA, which shows similar pathological characteristics to OA in human. A. lappa substantially reduced the MIA-induced weight-bearing of hind limb and reversed the cartilage erosion in MIA rats. IL-1β, a representative inflammatory mediator in OA, was also markedly decreased by A. lappa in the serum of MIA rats. In vitro, A. lappa lowered the secretion of NO and suppressed the IL-1β, COX-2, IL-6, and iNOS production in RAW264.7 macrophages activated with LPS. Based on its analgesic and anti-inflammatory effects, A. lappa could be a potential remedial agent against OA.
Keywords: osteoarthritis; Aucklandia lappa; analgesic; anti-inflammatory; MIA rats osteoarthritis; Aucklandia lappa; analgesic; anti-inflammatory; MIA rats

Osteoarthritis (OA) is one of the long-term chronic degenerative bone joint diseases that affects the aged population over 65 [1]. Generally, OA patients are diagnosed with damaged cartilage, inflamed synovium, and eroded chondrocytes, which trigger pain and physical distress [2]. Arthritic pain is predominantly caused by the degeneration of cartilage in joints by inflammation, and when the cartilage is seriously damaged bones can collide with each other causing unbearable pain and physical hardship [3]. The involvement of inflammatory mediators with symptoms such as pain, swelling, and stiffness of the joint is well documented. In OA patients, inflammatory cytokines, which cause the erosion of cartilage and subchondral bone are found in the synovial fluid [4]. Two major complaints that OA patients generally have are pain and synovial inflammation. Therefore the primary goals of the current OA therapies are to lower pain and inflammation. [5]. Although the available OA treatments, including non-steroidal and steroidal drugs, have proven efficacies in alleviating pain and inflammation, the long-term uses of these drugs have severe health consequences such as cardiovascular, gastro-intestinal, and renal dysfunctions [6]. Thus, a more effective medicine with fewer side effects has to be developed for the treatment of osteoarthritis.
Natural health products are being increasingly popular for being safe and easily available [7]. Traditional Korean medicines have proven efficacies against several inflammatory diseases, including arthritis [8]. Aucklandia lappa DC. is known for its medicinal properties, such as enhancing the circulation of qi for relieving pain and soothing the stomach, and has been used traditionally as a natural analgesic [9]. Previous reports suggest that A. lappa possesses anti-inflammatory [10,11], analgesic [12], anticancer [13], and gastroprotective [14] effects. The various biological activities of A. lappa are caused by its major active compounds: costunolide, dehydrocostus lactone, dihydrocostunolide, costuslactone, α-costol, saussurea lactone and costuslactone [15]. Earlier studies claim that costunolide showed anti-inflammatory properties in lipopolysaccharide (LPS), which induced the macrophages through the regulation of NF-kB and heat shock protein pathway [16,17]. However, no study has investigated the potential activities of A. lappa for OA treatment. The present research has investigated the therapeutic effects of A. lappa against OA using (monosodium-iodoacetate) MIA and acetic acid-induced rodent models.
Monosodium-iodoacetate (MIA) is famously used to produce much of the pain behaviors and the pathophysiological features of OA in animals [18,19,20]. When injected into knee joints, MIA disarrays the chondrocyte metabolism and induces inflammation and inflammatory symptoms, such as cartilage and subchondral bone erosion, the cardinal symptoms of OA [18]. Writhing response induced with acetic acid is widely regarded as the simulation of peripheral pain in animals where the inflammatory pain can be quantitatively measured [19]. The mouse macrophage cell line, RAW264.7, is popularly used to study the cellular responses to inflammation. Upon activation with LPS, RAW264 macrophages activate inflammatory pathways and secrete several inflammatory intermediaries, as such TNF-α, COX-2, IL-1β, iNOS, and IL-6 [20]. This study has evaluated the anti-nociceptive and anti-inflammatory effects of A. lappa against OA in MIA animal model, acetic acid-induced animal model, and LPS-activated RAW264.7 cells.

The dried root of A. lappa DC. used in the experiment was procured from Epulip Pharmaceutical Co., Ltd., (Seoul, Korea). It was identified by Prof. Donghun Lee, Dept. of Herbal pharmacology, Col. of Korean Medicine, Gachon University, and the voucher specimen number was deposited as 18060301.

2.2. HPLC Analysis of A. lappa Extract

Male Sprague–Dawley (SD) rats aged 5 weeks and male ICR mice aged 6 weeks were purchased from Samtako Bio Korea (Gyeonggi-do, Korea). Animals were kept in a room using constant temperature (22 ± 2 °C) and humidity (55 ± 10%) and a light/dark cycle of 12/12 h. The animals were familiarized with the condition for more than a week before the experiment started. Animals had an ad libitum supply of feed and water. The current ethical rules for animal care and handling at Gachon University (GIACUC-R2019003) were strictly followed in all animal experimental procedures. The study was designed investigator-blinded and parallel trial. We followed the euthanasia method according to the guidelines of the Animal Experimental Ethics Committee.

Rats were randomly separated into 4 groups, namely sham, control, indomethacin, and A. lappa. Being anesthetized with 2% isofluorane O2 mixture, the rats were injected using 50 μL of MIA (40 mg/m; Sigma-Aldrich, St. Louis, MO, USA) intra-articularly into the knee joints to lead to experimental OA. The treatments were conducted as below: control and sham groups were maintained only with AIN-93G basic diet. Only, indomethacin group was provided with indomethacin (3 mg/kg) incorporated into AIN-93G diet and A. lappa 300 mg/kg group was assigned to AIN-93G diet supplemented with A. lappa (300 mg/kg). The treatments were continued for 24 days since the day of OA induction at the rate of 15–17 g per 190–210 g body weight on a daily basis.

Blood was collected from the vein in abdominal area on 24 days after MIA injection and was left undisturbed for 30 min for clotting. Following centrifugation at 4000 rpm for 10 min, the serum was separated and stored at −70 °C. The level of pg was measured with a multiplex-assay kit (RnD Systems Inc. Minneapolis, MN, USA).

2.10. NO and Cytotoxicity Measurement

RAW264.7 cells were exposed to 30–300 µg/mL of A. lappa and LPS (1 µg/mL) for 24 h. After washing the cells with PBS, proteins were extracted with PRO-PREPTM Protein Extraction Solution (iNtRON Biotech, Gyeoggi-do, Korea). Same amounts of proteins (µg) were loaded in polyacrylamide gel and moved to a nitrocellulose membrane. After blocking the membrane at room temperature for an hour with blocking solution, primary antibodies (iNOS, IL-1β and COX-2, Abcam, UK) were applied to react overnight at 4 °C. After adequate washing with TBST, membranes were probed with HRP-conjugated secondary antibody (Abcam, UK) in ambient temperature up to 2 h and then incubated with substrate-ECL Western blotting (Thermo Scientific Corp., Waltham, MA, USA). The Western blot image was analyzed with Amersham ImagerTM 600 (GE Healthcare Bio-sciences Corp., Seoul, Korea). Additionally, multiplex assay for IL-1β and IL-6 was carried out with Mouse Premixed Multi-Analyte Kit (RnD System, USA) in accordance with the manufacturer’s directions and the results were evaluated with a Luminex MAGPIX analyzer (Luminex Corp., Austin, TX, USA).

For statistical analysis, Graph Pad Prism® 5.0 (Graph Pad Software, CA, USA) was used. The significance difference was confirmed at p < 0.05 with Dunnett’s post hoc test and one-way ANOVA, all our data followed the normal distribution results and were expressed as mean ± standard error.

In this study, costunolide was obtained and identified in A. lappa extract using HPLC-UV method. The extract contains 0.4 mg/g of costunolide. A 3D-HPLC chromatogram of the analysis along with the chemical structure of the constituent compound is presented in Figure 1.

Hind limb’s weight bearing is an index of join discomfort and arthritic pain and is commonly used in animal models to assess the analgesic properties of natural substances against OA. The distribution of the weight bearing ratio between the hind limbs was measured during 24 days after MIA injection. As illustrated in Figure 2A, MIA dramatically reduced the weight-bearing distribution in the control rats on day 3, and remained significantly lower thereafter as compared with the sham group. Noticeably, the A. lappa-treated rats showed a significant improvement in weight bearing. In particular, 300 mg/kg A. lappa-treated group had a similar level of recovery with the indomethacin 3 mg/kg-treated group (Figure 2B).

The representative photographic images of the rat’s knee joints are shown in Figure 3. As illustrated in Figure 3A, the cartilage in the joint of sham rats was in a glossy, smooth state; whereas that of the control rat was clearly less polished along with visible damages in certain areas. The MIA-inflicted cartilage erosion was markedly recovered by A. lappa and indomethacin, and the recovery by A. lappa was higher than that of indomethacin. The micro-CT images show that a substantial loss of subchondral bone in the tibia occurred after MIA injection in the rats (Figure 3B), and the bone loss was significantly mitigated by A. lappa. Similarly, the cortical bone thinning in the MIA rats was markedly reversed with A. lappa supplementation.

Writhing responses in the acetic acid-induced mice were measured to investigate the analgesic effects of A. lappa. The average writhing responses in the control and the ibuprofen groups were 26.25 and 16.43, respectively. A. lappa administrated group showed a significant fall in the number of writhing in comparison with the control at all doses, especially, the 600 mg/kg A. lappa mouse showed the average writhing of 17.06, which was similar to the ibuprofen mouse (Figure 5). This result suggests that A. lappa has a pain-relieving effect on the acetic acid-induced writhing response.

3.6. Effects of A. lappa on Inflammatory Response in LPS-Activated RAW264.7 Cells

In LPS-activated RAW264.7 cells, A. lappa showed anti-inflammatory actions by decreasing the NO and the inflammatory cytokine, as well as COX-2, iNOS, IL-1β, and IL-6. A. lappa did not express any cytotoxicity with up to 300 µg/mL (Figure 6A) in the cytotoxicity assay. The LPS-activated NO production was down-regulated by A. lappa in a dose-dependent way. Remarkably A. lappa at 300 µg/mL, reduced more than 80% of NO compared to the control (Figure 6B). A. lappa suppressed the mRNA expression of IL-1β, IL-6, and iNOS dose-dependently (Figure 6C–E). A significant decrease in the level of IL-6 by A. lappa was also noticed. To study the effects of A. lappa on the protein levels of pro-inflammatory cytokines, Western blot and multiplex analyses were performed. As shown in Figure 6F, G, A. lappa inhibited the increased production of IL-1β and IL-6 in LPS-activated RAW264.7 cells in a dose-dependent manner. Western blot images show that the iNOS, COX-2 and IL-1β were suppressed by A. lappa (Figure 6H).

Writing original draft and review, H.-G.J.; investigation, G.-Y.L.; investigation, data curation and writing—review and editing, C.Y.B.; resources and funding acquisition H.S.S.; conceptualization and project administration, D.L. All authors have read and agreed to the published version of the manuscript.

This work was supported by the National Research Foundation of Korea (NRF) grant funded by the Korea government (MSIT) (No. 2020R1A2C1013956). 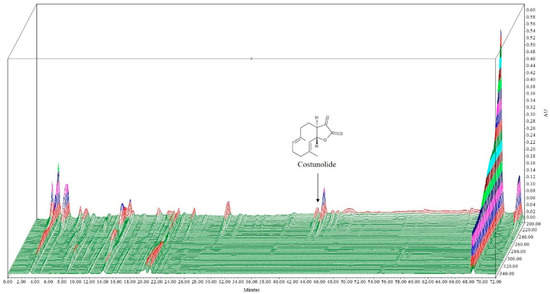 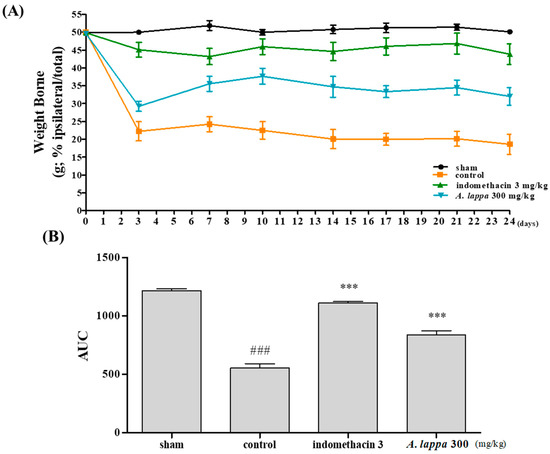 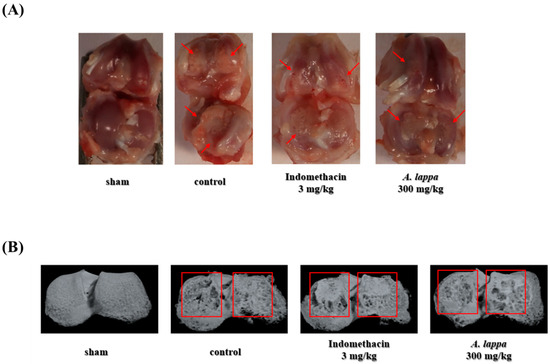 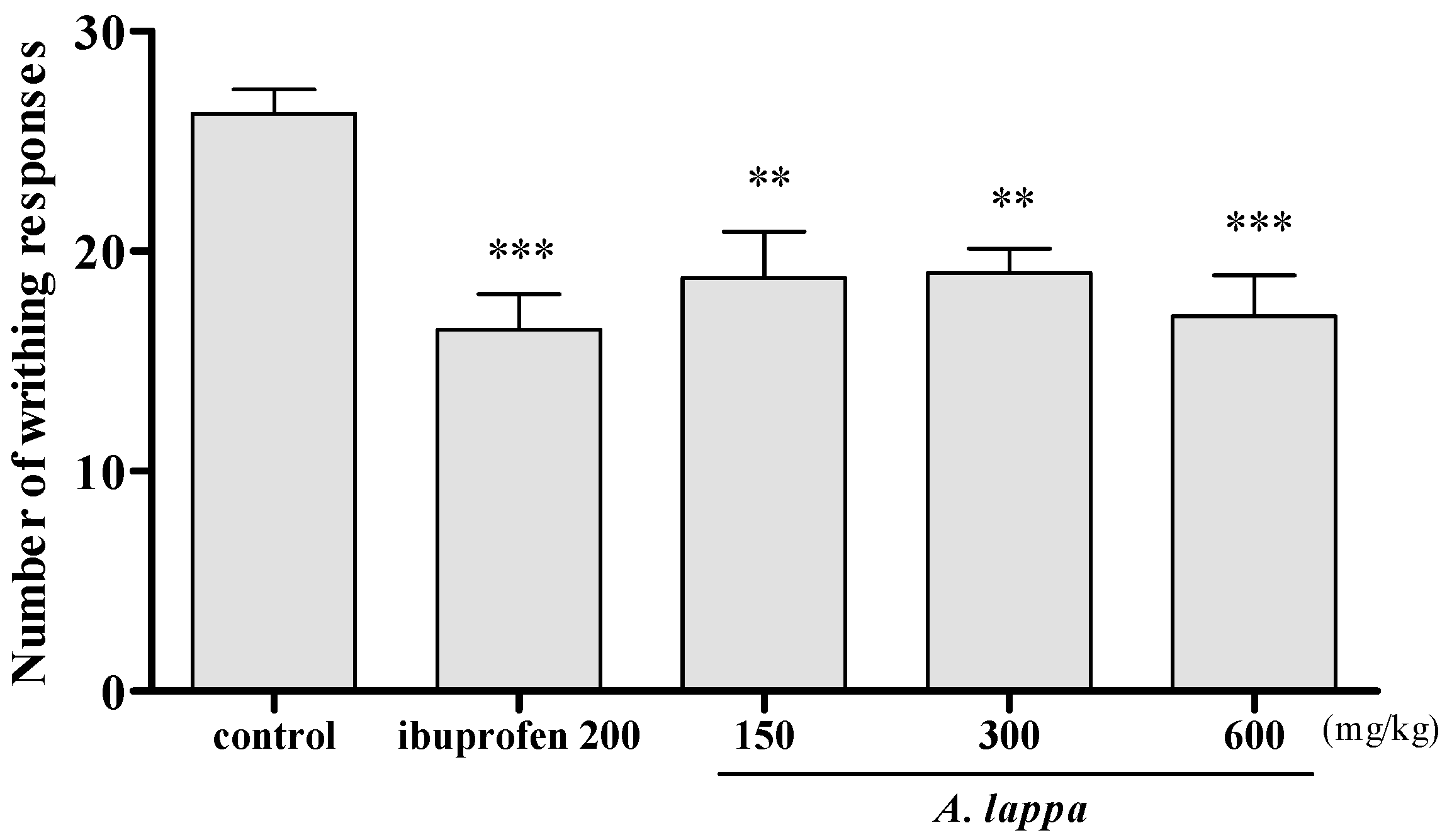 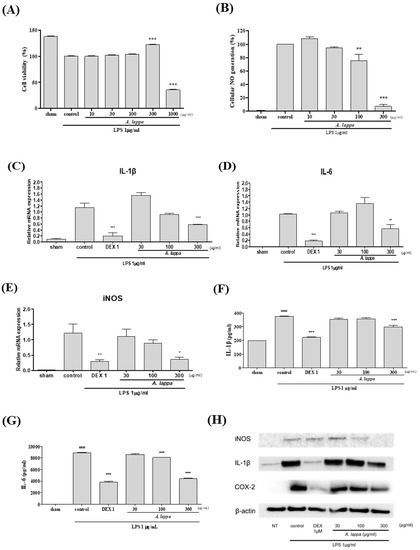 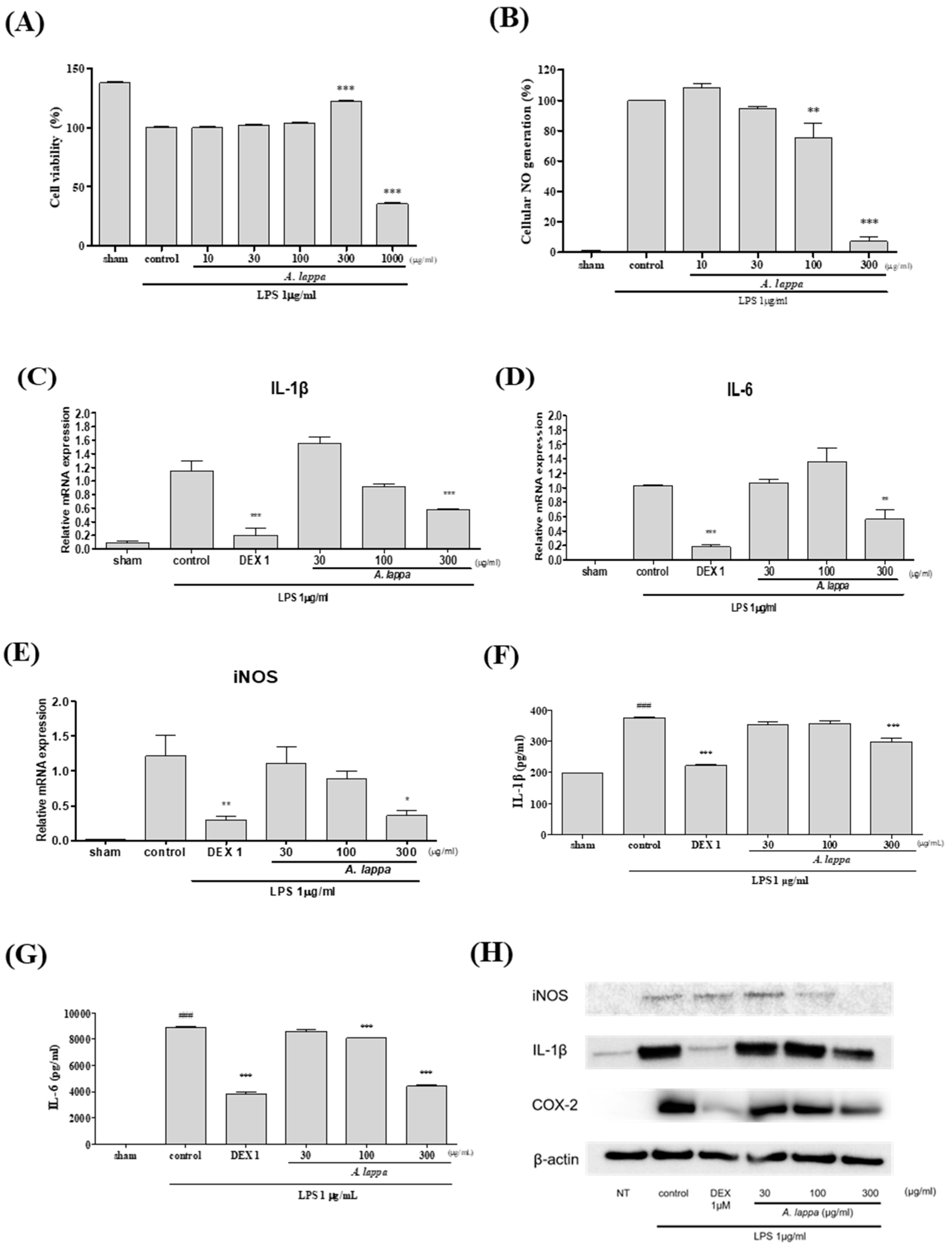