The Use of Essential Oils from Thyme, Sage and Peppermint against Colletotrichum acutatum
Next Article in Special Issue

Edible Chitosan/Propolis Coatings and Their Effect on Ripening, Development of Aspergillus flavus, and Sensory Quality in Fig Fruit, during Controlled Storage

Polyploidization, or whole genome duplication (WGD), has an important role in evolution and speciation. One of the biggest challenges faced by a new polyploid is meiosis, in particular, discriminating between multiple related chromosomes so that only homologs recombine to ensure regular chromosome segregation and fertility. Here, we report the production of two new hybrids formed by the genomes of species from three different genera: a hybrid between Aegilops tauschii (DD), Hordeum chilense (HchHch), and Secale cereale (RR) with the haploid genomic constitution HchDR (n = 7× = 21); and a hybrid between Triticum turgidum spp. durum (AABB), H. chilense, and S. cereale with the constitution ABHchR (n = 7× = 28). We used genomic in situ hybridization and immunolocalization of key meiotic proteins to establish the chromosome composition of the new hybrids and to study their meiotic behavior. Interestingly, there were multiple chromosome associations at metaphase I in both hybrids. A high level of crossover (CO) formation was observed in HchDR, which shows the possibility of meiotic recombination between the different genomes. We succeeded in the duplication of the ABHchR genome, and several amphiploids, AABBHchHchRR, were obtained and characterized. These results indicate that recombination between the genera of three economically important crops is possible. View Full-Text
Keywords: wheat; Hordeum chilense; Triticeae; WGD (whole genome duplication); hybridization; meiosis; recombination; synapsis; GISH wheat; Hordeum chilense; Triticeae; WGD (whole genome duplication); hybridization; meiosis; recombination; synapsis; GISH
►▼ Show Figures 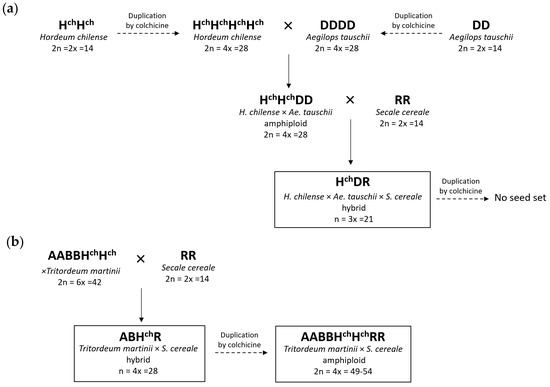