Prenatal Neuropathologies in Autism Spectrum Disorder and Intellectual Disability: The Gestation of a Comprehensive Zebrafish Model
Next Article in Special Issue

G Proteins and GPCRs in C. elegans Development: A Story of Mutual Infidelity

Many vital processes during C. elegans development, especially the establishment and maintenance of cell polarity in embryogenesis, are controlled by complex signaling pathways. G protein-coupled receptors (GPCRs), such as the four Frizzled family Wnt receptors, are linchpins in regulating and orchestrating several of these mechanisms. However, despite being GPCRs, which usually couple to G proteins, these receptors do not seem to activate classical heterotrimeric G protein-mediated signaling cascades. The view on signaling during embryogenesis is further complicated by the fact that heterotrimeric G proteins do play essential roles in cell polarity during embryogenesis, but their activity is modulated in a predominantly GPCR-independent manner via G protein regulators such as GEFs GAPs and GDIs. Further, the triggered downstream effectors are not typical. Only very few GPCR-dependent and G protein-mediated signaling pathways have been unambiguously defined in this context. This unusual and highly intriguing concept of separating GPCR function and G-protein activity, which is not restricted to embryogenesis in C. elegans but can also be found in other organisms, allows for essential and multi-faceted ways of regulating cellular communication and response. Although its relevance cannot be debated, its impact is still poorly discussed, and C. elegans is an ideal model to understand the underlying principles. View Full-Text
Keywords: GPCRs; G proteins; development; receptor-independent function GPCRs; G proteins; development; receptor-independent function
►▼ Show Figures 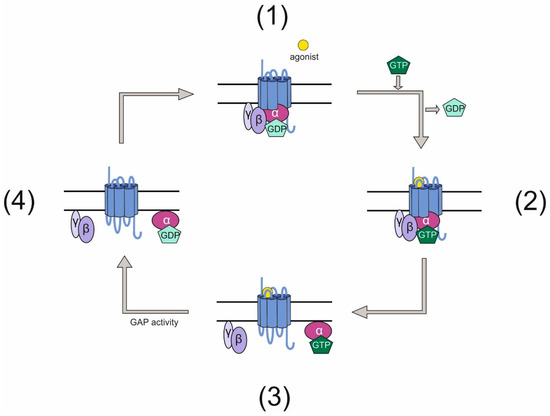