Machine Learning for Gully Feature Extraction Based on a Pan-Sharpened Multispectral Image: Multiclass vs. Binary Approach
Next Article in Special Issue

Spatiotemporal Variation of NDVI in the Vegetation Growing Season in the Source Region of the Yellow River, China
Previous Article in Journal

A Vector Line Simplification Algorithm Based on the Douglas–Peucker Algorithm, Monotonic Chains and Dichotomy

When using the traditional Douglas–Peucker (D–P) algorithm to simplify linear objects, it is easy to generate results containing self-intersecting errors, thus affecting the application of the D–P algorithm. To solve the problem of self-intersection, a new vector line simplification algorithm based on the D–P algorithm, monotonic chains and dichotomy, is proposed in this paper. First, the traditional D–P algorithm is used to simplify the original lines, and then the simplified lines are divided into several monotonic chains. Second, the dichotomy is used to search the intersection positions of monotonic chains effectively, and intersecting monotonic chains are processed, thus solving the self-intersection problems. Two groups of experimental data are selected based on large data sets. Results demonstrate that the proposed experimental method has advantages in algorithmic efficiency and accuracy when compared to the D–P algorithm and the Star-shaped algorithm. View Full-Text
Keywords: Line Simplification; Douglas-Peucker Algorithm; Monotonic Chain; Dichotomy Line Simplification; Douglas-Peucker Algorithm; Monotonic Chain; Dichotomy
►▼ Show Figures 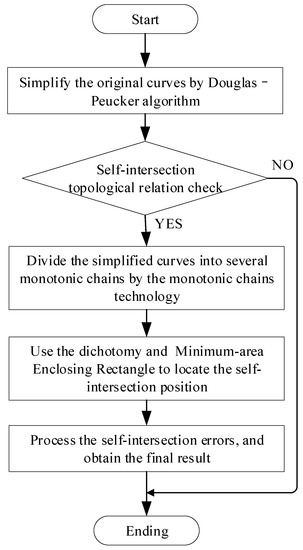