An Assessment of Police Officers’ Perception of Hotspots: What Can Be Done to Improve Officer’s Situational Awareness?

Gunshot detection technology (GDT) has been increasingly adopted by law enforcement agencies to tackle the problem of underreporting of crime via 911 calls for service, which undoubtedly affects the quality of crime mapping and spatial analysis. This article investigates the spatial and temporal patterns of gun violence by comparing data collected from GDT and 911 calls in Louisville, Kentucky. We applied hot spot mapping, near repeat diagnosis, and spatial regression approaches to the analysis of gunshot incidents and their associated neighborhood characteristics. We observed significant discrepancies between GDT data and 911 calls for service, which indicate possible underreporting of firearm discharge in 911 call data. The near repeat analysis suggests an increased risk of gunshots in nearby locations following an initial event. Results of spatial regression models validate the hypothesis of spatial dependence in frequencies of gunshot incidents and crime underreporting across neighborhoods in the study area, both of which are positively associated with proportions of African American residents, who are less likely to report a gunshot. This article adds to a growing body of research on GDT and its benefits for law enforcement activity. Findings from this research not only provide new insights into the spatiotemporal aspects of gun violence in urban areas but also shed light on the issue of underreporting of gun violence. View Full-Text
Keywords: Gun violence; gunshot detection technology (GDT); neat repeat; hot spots; under reporting; and spatial regression Gun violence; gunshot detection technology (GDT); neat repeat; hot spots; under reporting; and spatial regression
►▼ Show Figures 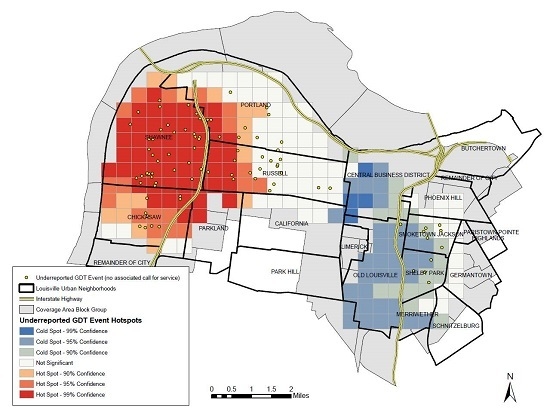