Augmented Virtuality for Coastal Management: A Holistic Use of In Situ and Remote Sensing for Large Scale Definition of Coastal Dynamics

The potential of close-range photogrammetry (CRP) to compete with terrestrial laser scanning (TLS) to produce dense and accurate point clouds has increased in recent years. The use of CRP for estimating tree diameter at breast height (DBH) has multiple advantages over TLS. For example, point clouds from CRP are similar to TLS, but hardware costs are significantly lower. However, a number of data collection issues need to be clarified before the use of CRP in forested areas is considered effective. In this paper we focused on different CRP data collection methods to estimate DBH. We present seven methods that differ in camera orientation, shooting mode, data collection path, and other important factors. The methods were tested on a research plot comprised of European beeches (Fagus sylvatica L.). The circle-fitting algorithm was used to estimate DBH. Four of the seven methods were capable of producing a dense point cloud. The tree detection rate varied from 49% to 81%. Estimates of DBH produced a root mean square error that varied from 4.41 cm to 5.98 cm. The most accurate method was achieved using a vertical camera orientation, stop-and-go shooting mode, and a path leading around the plot with two diagonal paths through the plot. This method also had the highest rate of tree detection (81%). View Full-Text
Keywords: close-range photogrammetry; diameter at breast height; point cloud; circle fitting; forestry close-range photogrammetry; diameter at breast height; point cloud; circle fitting; forestry
►▼ Show Figures 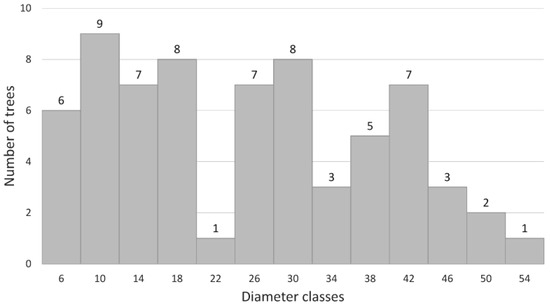