An ACT-R Based Humanoid Social Robot to Manage Storytelling Activities

Due to the capability to perform dangerous tasks, instead of people, in hazardous environments, research on wall-climbing robots has become a significant subject in robotics [1,2,3,4,5]. Currently, most wall-climbing robots are intended for maintenance or inspection in certain environments, such as the exteriors of buildings, bridges, or dams [6,7,8,9,10].
In general, wall-climbing robots adopt four types of adhesive mechanisms, which are vacuum suction cups [11], magnetic attraction [12,13], adhesive materials [14,15], and gripping claws or grasping mechanisms [16,17,18,19,20]. Each of the mechanisms possesses its own distinct advantages and drawbacks. For example, vacuum suction cups can perform nondestructive examination, but they require energy to maintain adhesion. Magnetic attraction offers a large adhesion force and nondestructive conduction, but it is allowed be utilized on ferromagnetic surfaces. In [13], the authors proposed a magnetic adhesion robot that is capable of climbing non-ferromagnetic surfaces by utilizing a sandwich configuration. However, in the application of this kind of robot, both sides of the climbing surface should be equipped with the climbing devices.
Adhesion materials can be used on complex surfaces, but they are difficult to use on rough surfaces. Grasping mechanisms can also be employed on complex surfaces, but they damage the surface. Therefore, the choice of adhesion mechanism plays determinant role in the design of wall-climbing robots.
Since suction cups can achieve nondestructive examination and navigate on smooth surfaces, suction cups are extensively utilized as the adhesive mechanism for wall-climbing robot. Suction cups can be divided into active suction cups and passive suction cups. Wall-climbing robots using active suction cups possess the advantage that the status of attachment and detachment can be easily controlled. However, a pump needs to output continuous energy to maintain the attachment, and a large amount of noise is generated. In addition, pumps result in a heavy payload for wall-climbing robots. On the other hand, wall-climbing robots utilizing passive suction cups offer the features of no noise and light weight because there is no need for a pump to provide energy to maintain attachment. However, it is quite challenging to control the attachment and detachment. Nevertheless, considering the noise and light weight of the robot, passive suction cups are expected to be used for weight minimization of wall-climbing robots. Considering the locomotion mechanism, wall-climbing robots can also be classified into four types, which are legged [21], wheeled [22], cable-driven [23], and tracked belt [10,16,24]. Each locomotion mechanism has its advantages and disadvantages. For instance, legged locomotion can move over cracks and avoid obstacles [21]. However, the legged wall-climbing robot requires motors drive and coordinate the legs. And a vacuum pump to provide the attachment force, it also requires a complicated control system to moderate the gait. Although wheeled locomotion can generate high velocities, wheeled robots may generate problems with the loss of friction with the surface due to small contact area. Cable-driven locomotion is commonly utilized in current window-cleaning of tall buildings [23]. However, the cable system must be equipped with a trolley on the roof of the building. The tracked belt can achieve continuous locomotion with high velocities, while having a larger contact area. The difficulties and challenges are attachment method of the attachment device of the wall-climbing robot and the turning method.
In our previous research [1,11], a wall-climbing robot is demonstrated, which adopts the tracked belt as a locomotion mechanism and passive suction cups as an adhesion mechanism. It possesses the ability to climb up walls, but exhibits a significant pitch-up falling problem, as shown in Figure 1. Indeed, the front suction cup cannot touch the surface due to gravity, which generates a moment and leads the robot to fall. The main factors for developing a wall-climbing robot are to solve the problem of falling and make the adhesion mechanism completely attach to the surface area. This paper proposes a pressing attachment approach to solve the pitch-up falling problem, which ensures the front attached suction cup can obtain sufficient reaction force from the attached surface. The force is greater than the requisite pressing force that can press the passive suction cup to attach to the surface completely. This pressing attachment method is implemented by a designed guide rail. This paper is an extension and continuation of our previous work [25].
For our research, the purpose is to obtain a method that can reliably move on the wall. In this paper, we demonstrate a method to prevent wall-climbing robots from falling during climbing upwards locomotion. At the current stage of research, our focus is the completely attachment method of the attachment device of the wall-climbing robot. The proposed robot only utilizes one motor to achieve the upwards locomotion of the wall-climbing robot, as well as completes the process of the force changing the attachment device during it attching on the climbing surface. Therefore, this study constitutes an important foundation for our future research.
The remainder of this paper proceeds as follows. Section 2 introduces the attachment approach, and conducts force analysis on the proposed robot. The properties of the suction cup are then investigated to realize the pressing method by experiments in Section 3. Section 4 introduces the guide rail function areas and conducts experiments to verify the attachment approach by a force measurement system, and then presents the results and discussion. Finally, conclusions and directions for future work are reported in Section 5.

In order to prevent robots from falling and make them attach to surfaces completely, the requirements for realizing the pressing attachment approach are introduced in this section. Then, force analysis of the proposed robot is carried out to identify the requirements.

2.1. Design of the Robot Design

3. Analysis of the Adopted Suction Cup

To experimentally investigate the characteristics of the suction cup, the optimal pressing force, the effect on the suction cup at different pulling speeds and the relationship between force and displacement of the adopted suction cup are measured by using the experimental test-bed, as shown in Figure 4.

The utilized passive suction cup of the proposed wall-climbing robot is shown in Figure 5, and corresponding parameters are listed in Table 1.
Figure 6 shows that the suction cup height changes with the applied force on the suction cup.

4.1. Functions Area of the Guide Rail

Figure 12 shows a prototype of the proposed wall-climbing robot, which is designed to demonstrate the proposed pressing approach. The robot is mainly composed of passive suction cups, tracked belt, two guide rails, one motor, several pulleys and two tails. The maximum number of attached suction cup is 3. Therefore, when the robot climbs upwards, the attached suction cup numbers will change from 3 to 2 or 2 to 3. The corresponding parameters of the robot are presented in Table 3.

The experimental result shown in Figure 15 indicates that the proposed guide rail has the ability to change the suction cup force while they are moving relative to each other. It should be pointed out that the designed guide rail is not an optimal design. As seen in Figure 5, since an oblique line is used in the pulling area, the height of the pulling area suddenly changes to zero from the maximum height (i.e., 4 mm). Indeed, we found in our experiments that the robot will vibrate when the number of attached suction cups transforms from (i) to (). This is because the last attached suction cup detaches from the surface, and this will result in a sharp decrease of adhesive force (see Figure 15).
Therefore, the designed guide rail can be improved by modifying the pulling area. According to the current guide rail design, it is also be noted that the tracked belt can only rotate in one direction, which allow the robot to climb up. The backward locomotion is not allowed in current stage. This problem can also be improved by modifying the guide rail. A smaller adhesive force would generate a smaller pressing force to the front attached suction cup. Considering this issue, it is better to design a larger safety coefficient to maximize the desired adhesive force, which must be smaller than the detachment force of the suction cup.
The experimental result shown in Figure 16 indicates that the robot seems to slightly drift with respect to the straight line. Due to the great flexibility of the belt and suction cups in the designed robot, and the limitation and influence of the mechanical structure, slightly drift will be caused when walking straight, but this characteristic will be compensated and modified in the turning motion of the robot.
In our future work, the turning motion of our robot will be realized by two independent straight-moving modules, while the two independent modules climb up under different velocities. However, as the attached suction cups can not move relative to the belts, it is necessary to add a new parts in the design to ensure the attached suction cups can move relative to the belts to realize the robot turning ability. Therefore, this study constitutes an important foundation for our future research. Based on the analysis of one single module locomotion, we could connect the modules to form a multi-body wall-climbing robot to achieve the locomotion on different surfaces even on a curve surface. The application of the robot will depend on the direction of the joint between the adjacent body segments.

In this paper, a quasi-static model was created to determine the forces acting on the robot. A pressing approach for preventing the robot from falling was also proposed. Then, the properties of the adopted suction cup were investigated experimentally. The results of the suction cup were used to determine the minimum requisite optimal pressing force and force distribution for the proposed guide rail design. A guide rail was then designed to realize the pressing approach and the functions of the guide rail were introduced. A prototype of the wall-climbing robot was developed and implemented to demonstrate the proposed pressing method. An experimental setup was designed and fabricated to validate the force change of the attached suction cup during the robot climbing. Experimental results demonstrated that the suction cup can completely attach to the climbing surface and change the force magnitude and direction when the suction cup moves relative to the guide rail. Moreover, experiments showed that the developed robot can climb on different smooth surfaces. The proposed approach can be directly utilized to design other wall-climbing robots to prevent them from falling.
It should be noted that, although the robot can climb upwards without falling, it can only climb in a straight line. To address this limitation, in future study, we will investigate the turning method and ability of a wall-climbing robot that utilizes a tracked belt with passive suction cups. The prototype will be adopted onboard power system. The lightweight improvement of the guide rail will be carried out in our future work.

The following are available online at https://www.mdpi.com/2218-6581/9/2/26/s1, Video S1: Experiments of the Pressing Attachment Approach for a Wall-Climbing Robot Utilizing Passive Suction Cups. 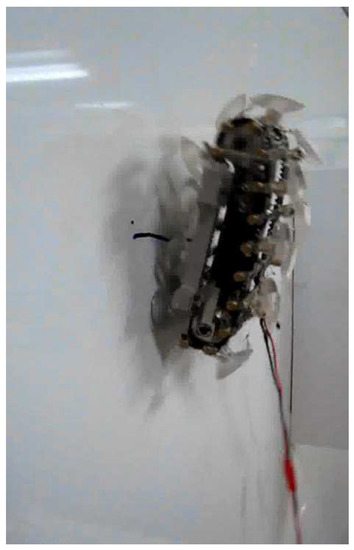 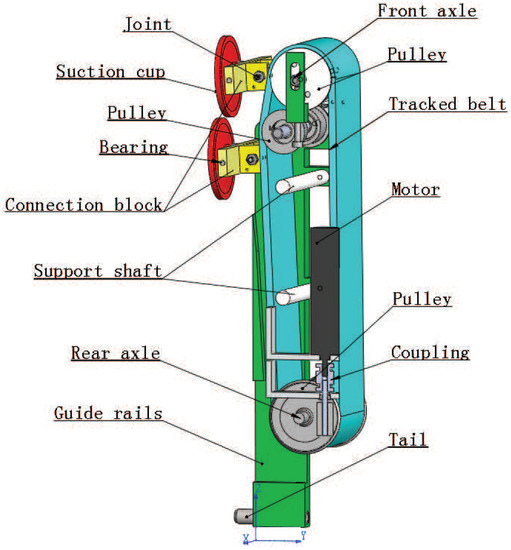 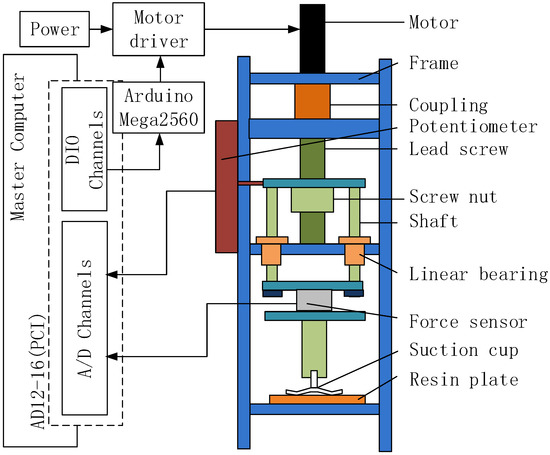 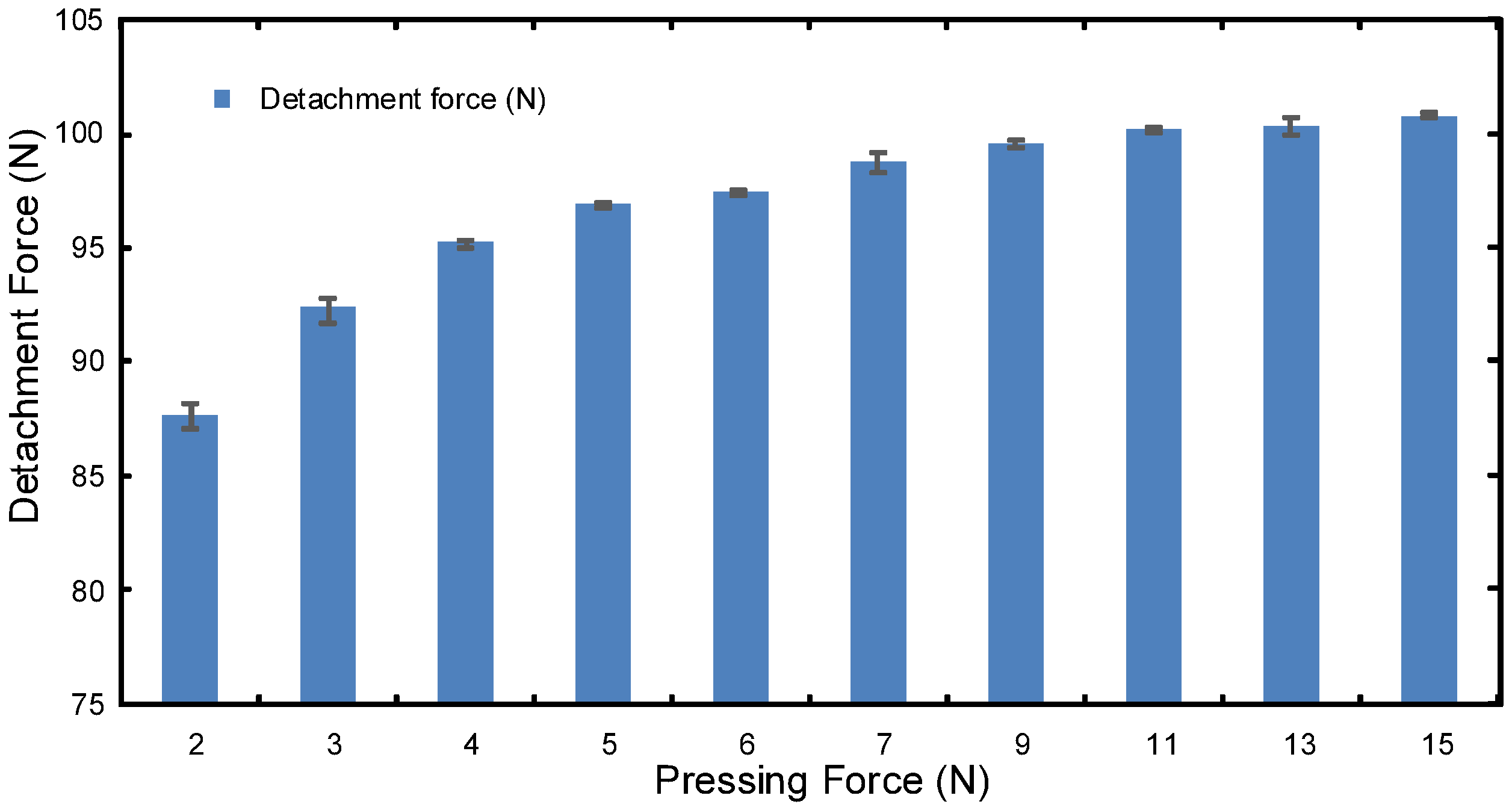 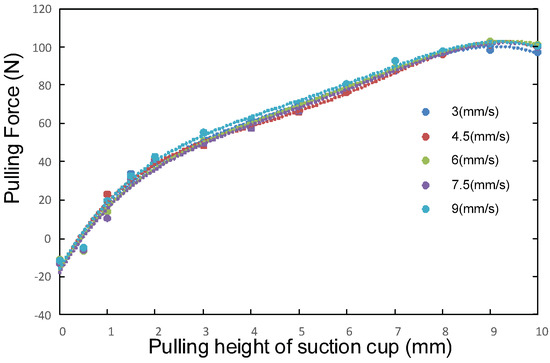 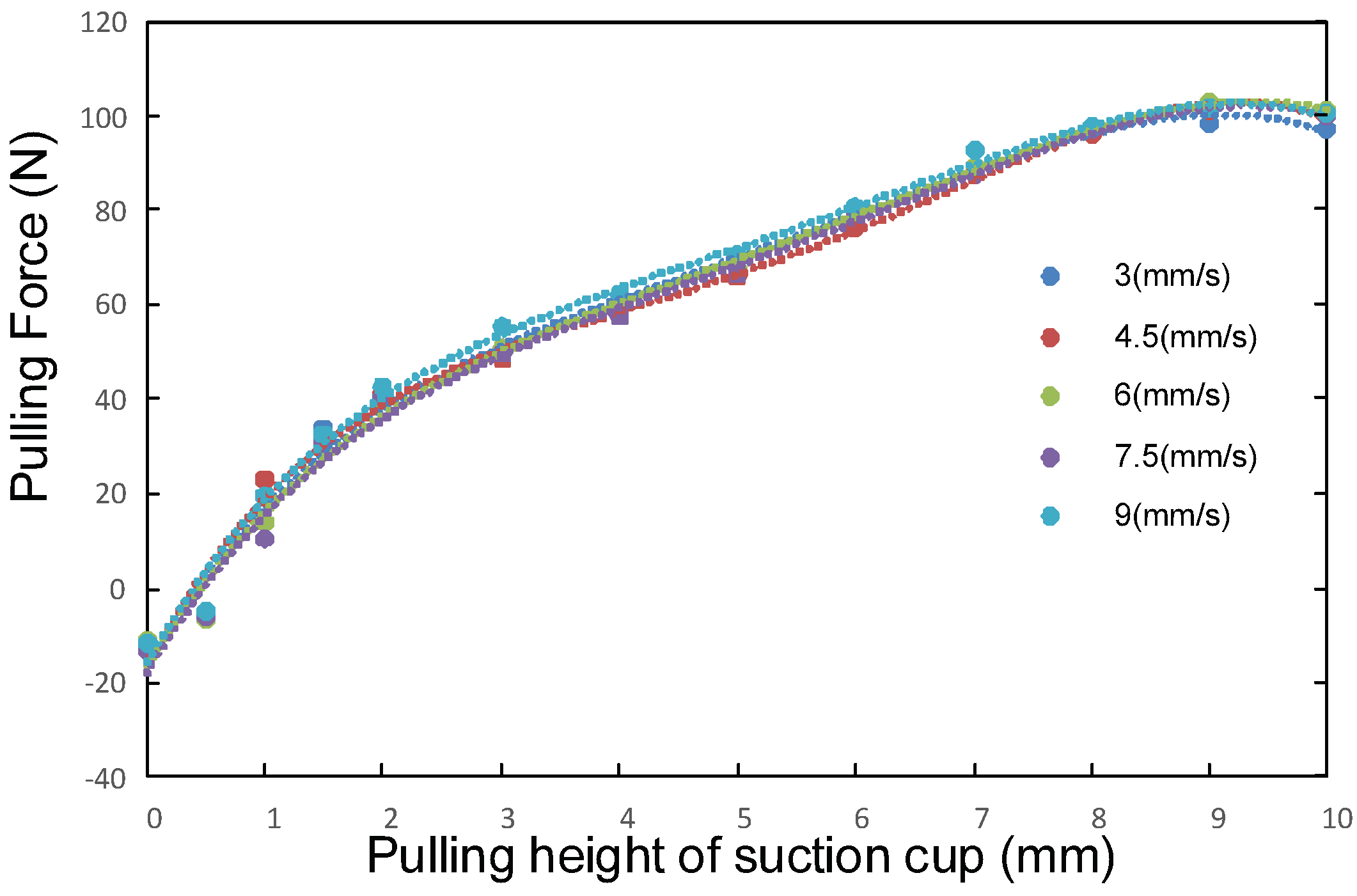 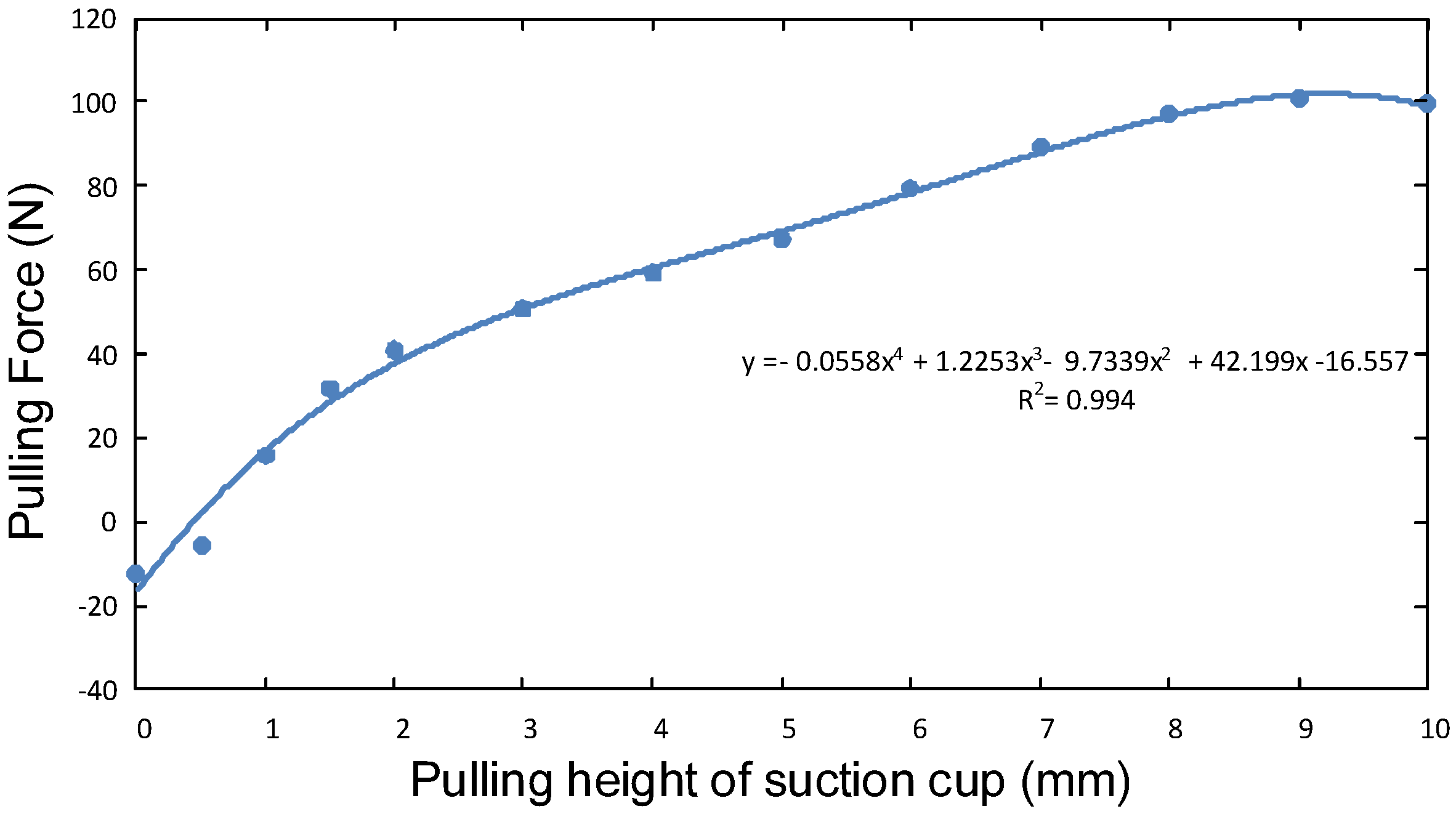 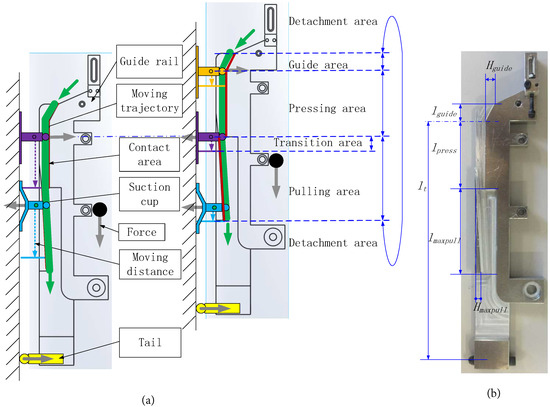 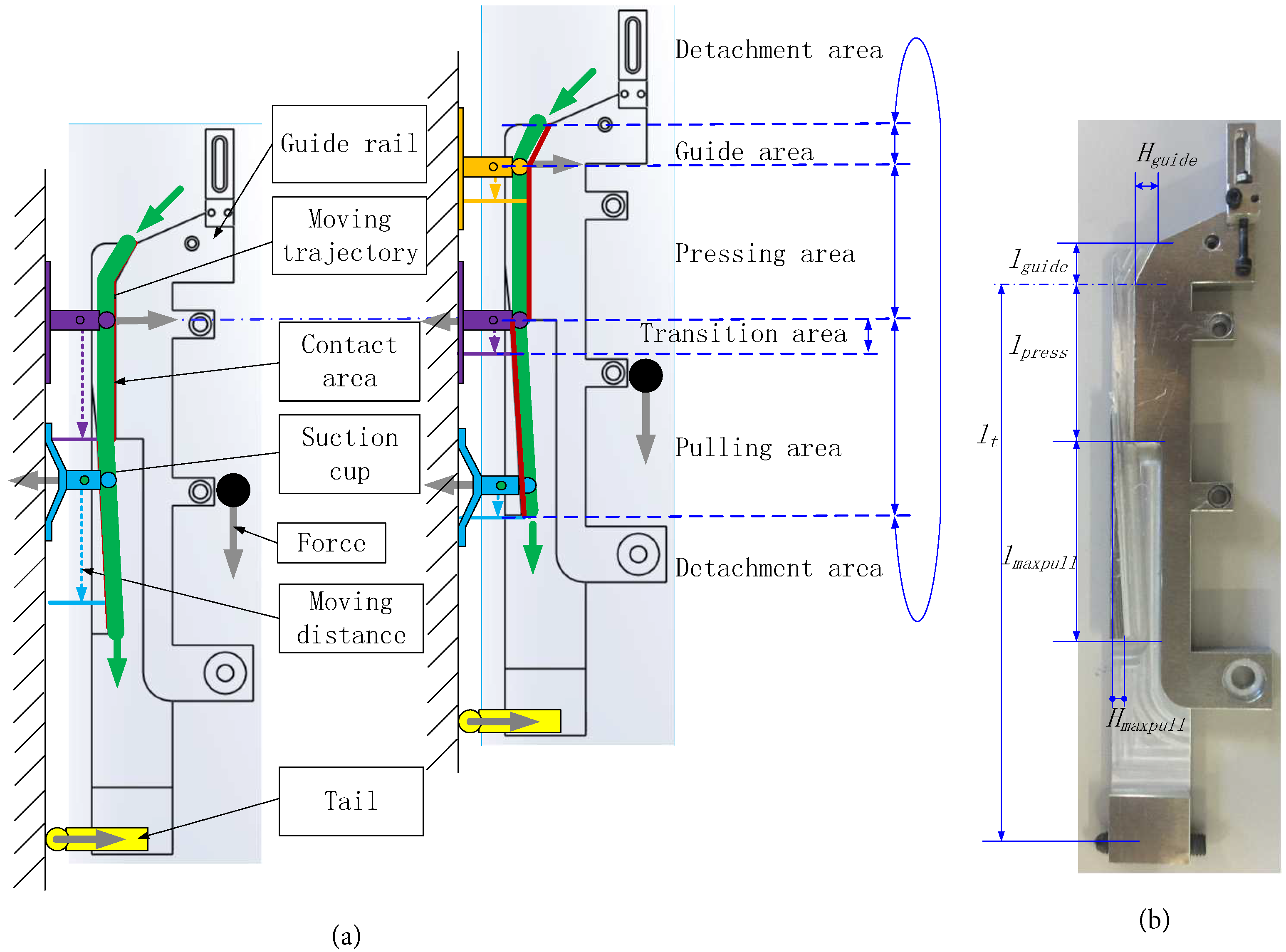 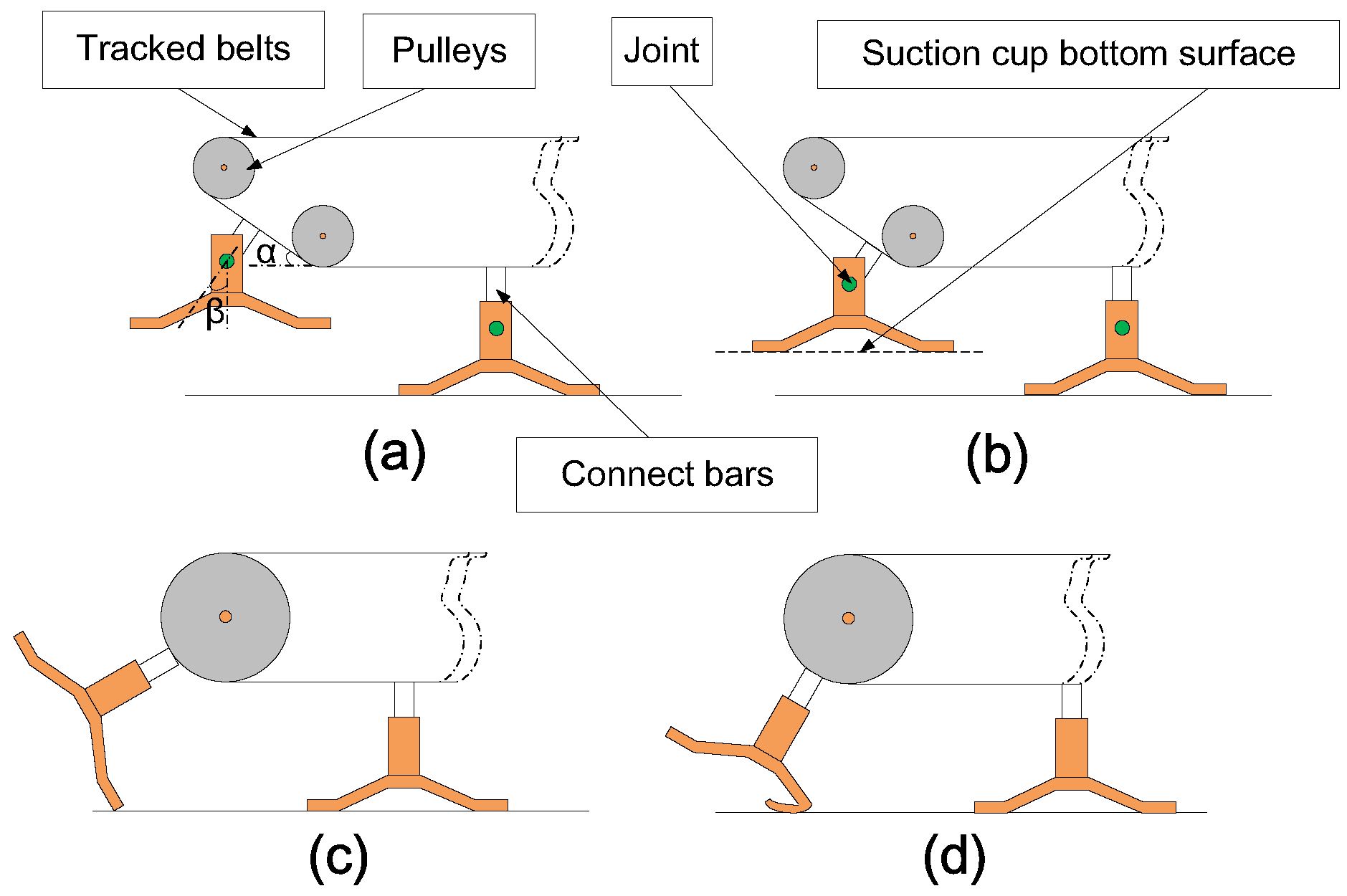 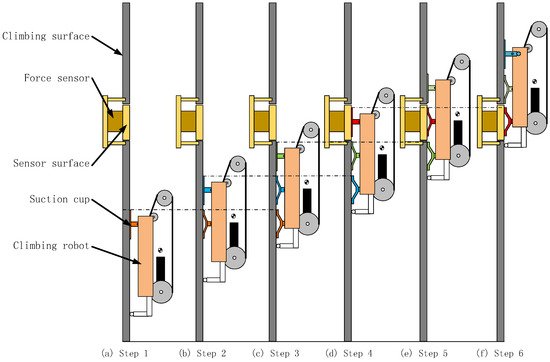 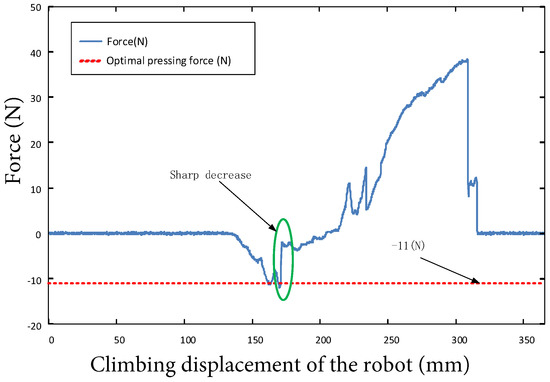 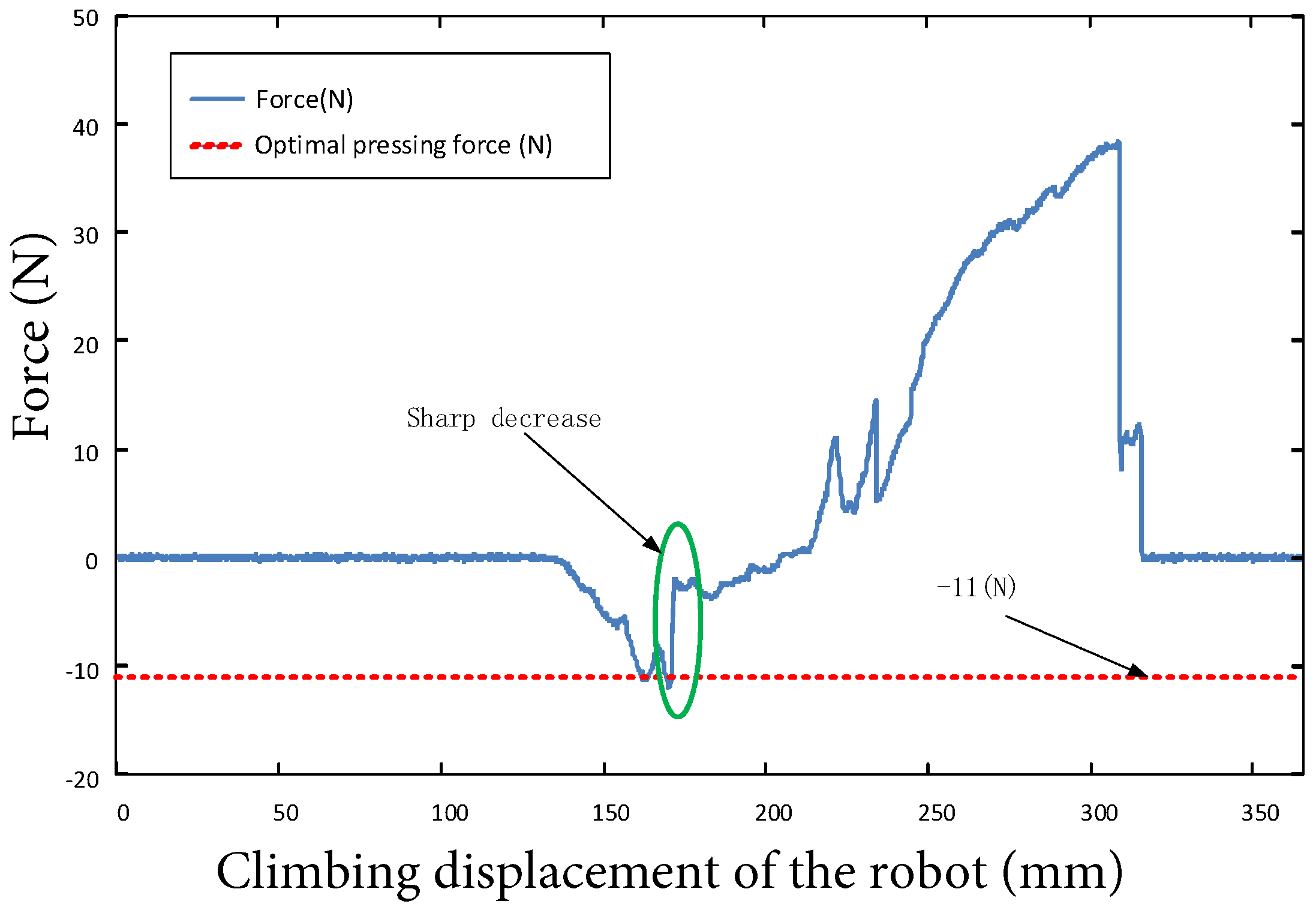 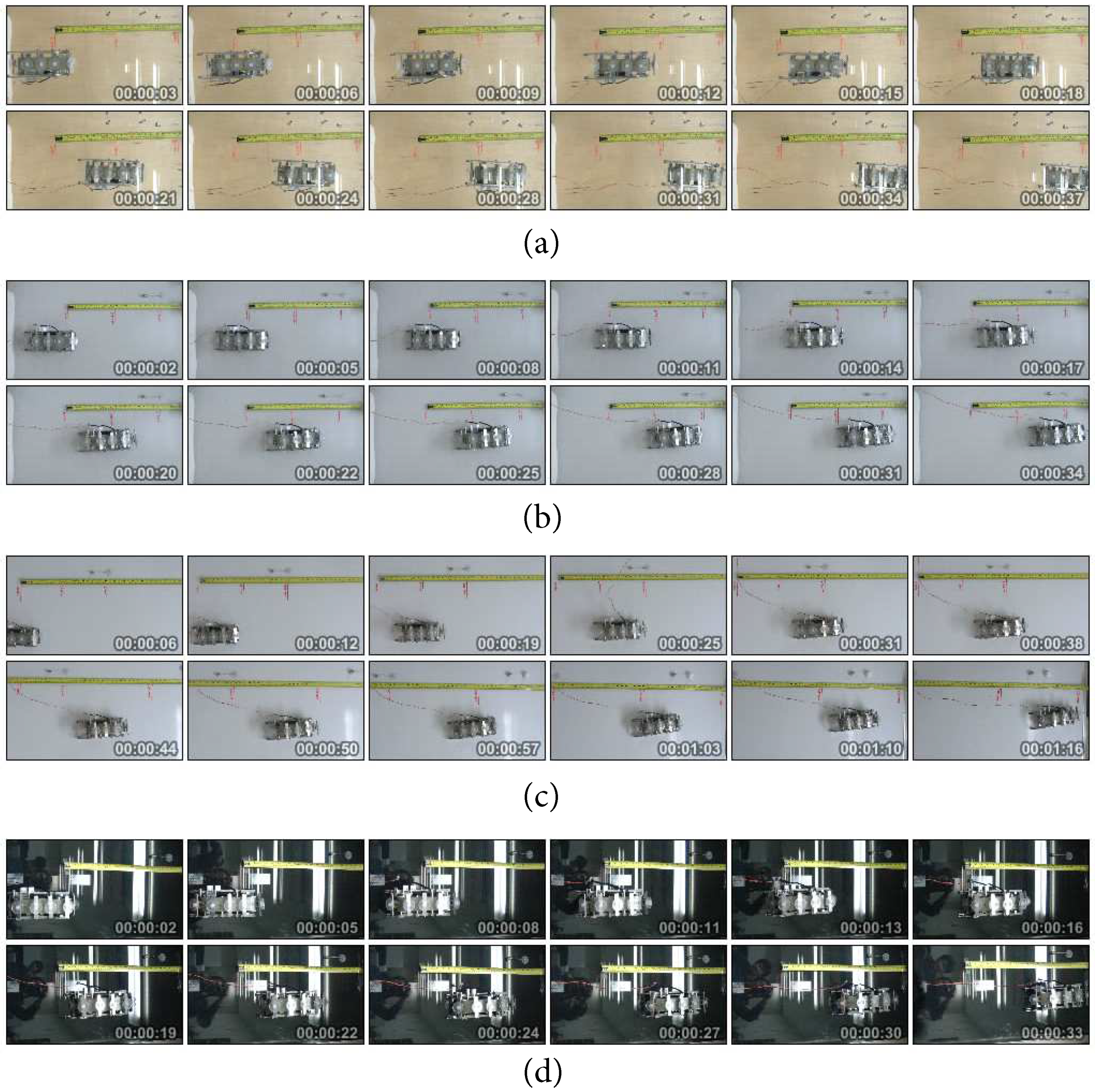 Table 3. Specifications of the prototype in experiments.
Table 3. Specifications of the prototype in experiments.
© 2020 by the authors. Licensee MDPI, Basel, Switzerland. This article is an open access article distributed under the terms and conditions of the Creative Commons Attribution (CC BY) license (http://creativecommons.org/licenses/by/4.0/).
We use cookies on our website to ensure you get the best experience. Read more about our cookies here.
Accept
We have just recently launched a new version of our website. Help us to further improve by taking part in this short 5 minute survey here. here.
Never show this again