Design and Implementation of a Connection between Augmented Reality and Sensors

:
The problem of inverse kinematics is essential to consider while dealing with the robot’s mechanical structure in almost all applications. Since the solution of the inverse kinematics problem is very complex, many research efforts have been working towards getting the approximate solution of this problem. However, for some applications, working with the approximate robot’s model is neither sufficient nor efficient. In this paper, an adaptive inverse kinematics methodology is developed to solve the inverse kinematics problem in such a way that compensate for unknown uncertainty in the Jacobian matrix of the serial kinematic chain robot manipulators. The proposed methodology is based on continuous second order sliding mode strategy (CSOSM-AIK). The salient advantage of the CSOSM-AIK approach is that it does not require the availability of the kinematics model or Jacobian matrix of the robot manipulators from joint space variables to Cartesian space variables. The global stability of the closed-loop system with CSOSM-AIK methodology is proven using the Lyapunov theorem. In order to demonstrate the robustness and effectiveness of the proposed methodology, some simulations are conducted.
Keywords:
adaptive inverse kinematics; robot manipulator; jacobian matrix; continuous sliding mode

This section summarizes the classical inverse kinematic method used for the control of serial kinematic chain robot manipulators with uncertain Jacobian matrix and after that the proposed approach is introduced in details in Section 3.
According to [1,2], the end-effector position of the robot manipulator can be specified in the operational space as follows: where and describe the position and orientation of the end-effector.
The direct kinematics can be written as [9,26,37]: where is a nonlinear vector function.
The differential kinematics can be obtained of the direct kinematics equation as [26]. where represents the vector of end-effector velocity and represents the vector of joint velocities. defines the analytical Jacobian matrix which is given by:
The time differentiation of the differential kinematics given in Equation (3) leads to [4,38]:
In general, the robot physical parameters and the Jacobian matrix parameters involve a nominal part and some variations. Therefore, assuming the existence of the kinematic model in Equation (5), uncertainties can be written as follows: where and are known. and represent the uncertainties (parameter variations) in the robot Jacobian matrix and its first derivative. All uncertain elements can be lumped as follows:
Thus Equation (5) can be rewritten as: where represents the uncertainty vector of the kinematics model consisting of all structured uncertainties.
If the kinematics model and the physical parameters of the Jacobian matrix of robotic manipulators (without uncertainties, i.e., ) are precisely known, the traditional inverse kinematics algorithm (TIK) is designed as [1,2]: where represents the end-effector position tracking error in which is the actual end-effector pose in the task space. describes the desired pose of the end-effector in the task space with desired position and desired orientation . The vector is the end-effector velocity tracking error in which, defines the vector of end-effector velocity and is the vector of end-effector desired velocity. The matrices and are positive definite diagonal proportional and derivative gain matrices.
Substituting Equation (9) into Equation (5) leads to the operational space error to be as follows [1,2,9,37]:
If and are positive definite matrices, the system is asymptotically stable and the error converges to zero with a rate that depends on the eigenvalues of matrices and . The block diagram of the traditional inverse kinematics (TIK) algorithm is depicted in Figure 1.

In this section, the proposed algorithms are presented in details.

In practice, it is difficult to implement the TIK algorithm as it requires the accurate knowledge of both; the physical parameters of the robot manipulators and the complete equations of motion. Unfortunately, the physical parameters cannot be obtained perfectly since the robot is required to interact with changing environment according to different specified tasks [25,26]. Moreover, there are structured uncertainties as represented by in Equation (7). The existence of the uncertainties deteriorates the tracking performance and the robustness. Consequently, the stability of the traditional inverse kinematics (TIK) algorithm in Equation (9) could not be guaranteed in the existence of uncertain kinematics from joint space to Cartesian space. Thus, the TIK algorithm must be coupled with robust methodologies to achieve the good suppression of the uncertain factors and to achieve the desired tracking performance. In this paper, the second order sliding mode scheme (SOSM) is used.
The second order sliding mode-based inverse kinematics strategy (SOSMIK) can be designed as: where is second order sliding surface vector which is defined as in [39]: where the matrices , and are positive definite diagonal proportional, integral and derivative gain matrices. The matrix is positive definite diagonal gain matrix. The robust sliding mode term is used to ensure the convergence of error to zero while tracking a desired trajectory with the existence of uncertainties.
To find the robust control law , the Lyapunov function can be chosen as [39]:
By taking the derivative of sliding surface in Equation (12) with respect to time, we get:
Substituting from Equation (15) into Equation (14) yields:
By using , Equation (16) can be rewritten as:
By substituting from Equation (8) into Equation (17), we get:
Substituting Equation (11) into Equation (18) yields:
By using , Equation (19) can be rearranged as:
The robust signal can be chosen as: where represents the gain matrix that describes the upper bound of uncertainty vector . is the identity matrix and is the signum function.
Substituting Equation (22) into Equation (21) yields:
In Equation (23), the first term on the right-hand side is negative definite. To render the 2nd term in Equation (23) less than or equal to zero, the parameter must be selected as:
From Equations (23) and (24), we can conclude that the stability condition is satisfied. Thus, the error state trajectory converges to the sliding surface .
Substituting Equation (22) into Equation (11) yields the SOSMIK as:
The resulting SOSMIK is illustrated in Figure 2.

In order to validate the feasibility and effectiveness of the proposed inverse kinematics strategy, the developed CSOSM-AIK methodology is tested for the inverse kinematics solution of two different serial robot manipulator configurations; the three-link robot arm and anthropomorphic robot arm. Also, a comparison with another work in the literature is provided.

The second numerical simulation used to test the developed continuous second order sliding mode-based adaptive inverse kinematics strategy (CSOSM-AIK) is the anthropomorphic arm shown in Figure 20 [26].
The direct kinematics equation for this arm can be deduced as follows [1,2]:
The analytical Jacobian can be given by [1,2]:
The manipulator is assumed to be at the initial posture rad corresponding to the end-effector initial pose (in the task space) of m. It is desired to move the end effector in the Cartesian space on the circular trajectory illustrated in Figure 21. The desired motion trajectory in the Cartesian space is defined as [26]:
In order to check the robustness of the proposed CSOSM-AIK inverse kinematics methodology, large severe uncertainties are simulated. This can be represented by an unpredicted variation of the Jacobian matrix at , which is set to:
The parameters of the various types of the competing inverse kinematics approaches are set as given in Table 3.
Figure 22, Figure 23 and Figure 24 illustrate the resulting position trajectories for joint 1, 2 and 3 respectively. Figure 25, Figure 26 and Figure 27 depict the tracking position errors in the X, Y and Z coordinates respectively. The resulting tracking position trajectories in in the X, Y and Z coordinates are shown in Figure 28, Figure 29 and Figure 30 respectively. The trajectory of the end-effector is shown in Figure 31. A comparison of tracking response characteristics of all presented inverse kinematics methodologies is shown in Table 4. The integral of the absolute error (IAE) and the integral of time-weighted absolute error (ITAE) are used as two performance metrics. It is obvious from Table 4 that the proposed continuous second order sliding mode -based adaptive inverse kinematics strategy (CSOSM-AIK) provides a superior trajectory tracking performance with a very small error.

4.3. Comparison between CSOSM-AIK and Other Approaches

In this paper, an adaptive inverse kinematics approach based on continuous second order sliding mode strategy (CSOSM-AIK) is designed for serial robot manipulators with uncertain Jacobian matrix. In this proposed strategy, an adaptation law is addressed to compensate for the unknown uncertainty of the Jacobian matrix parameters of the robot manipulators. The robustness of the proposed approach to uncertainties has been analytically proven. Also, the chattering effect has been totally canceled in the proposed approach by using a continuous second order sliding mode strategy. The global stability of the closed-loop system is proven using the Lyapunov theorem and both trajectory tracking error and error rate are further proven to converge to zero. Matlab simulations are presented to show the effectiveness of the proposed approach. Working towards implementing the proposed work on actual robots is highly considered in our future plan.

The authors would like to acknowledge the support of the Deanship of Scientific Research at Prince Sattam Bin Abdulaziz University, Saudi Arabia. 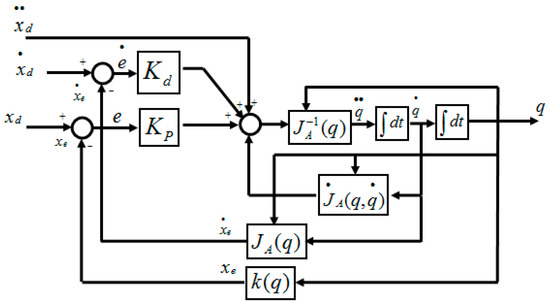 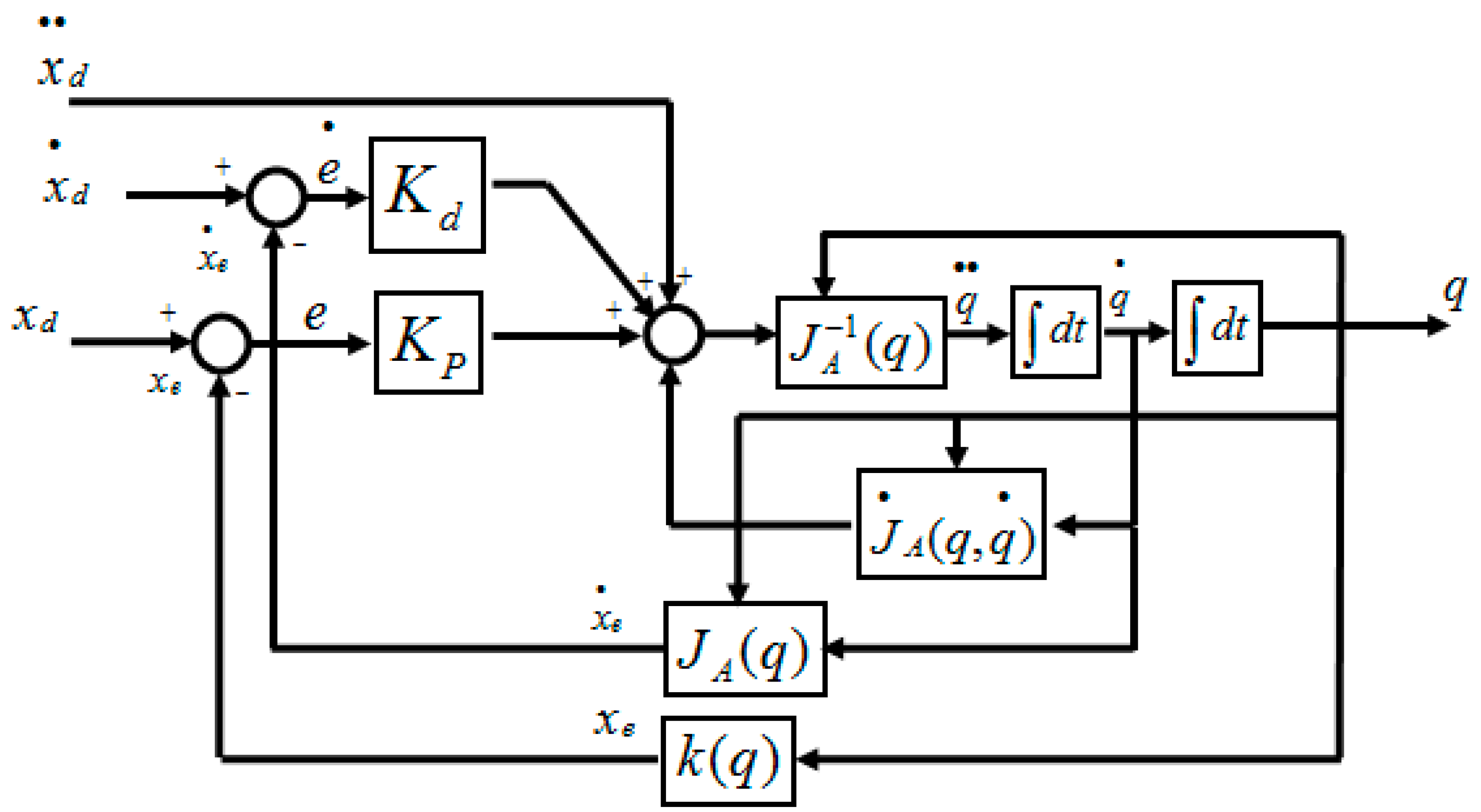 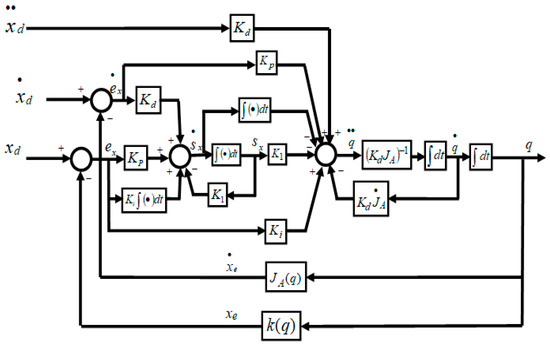 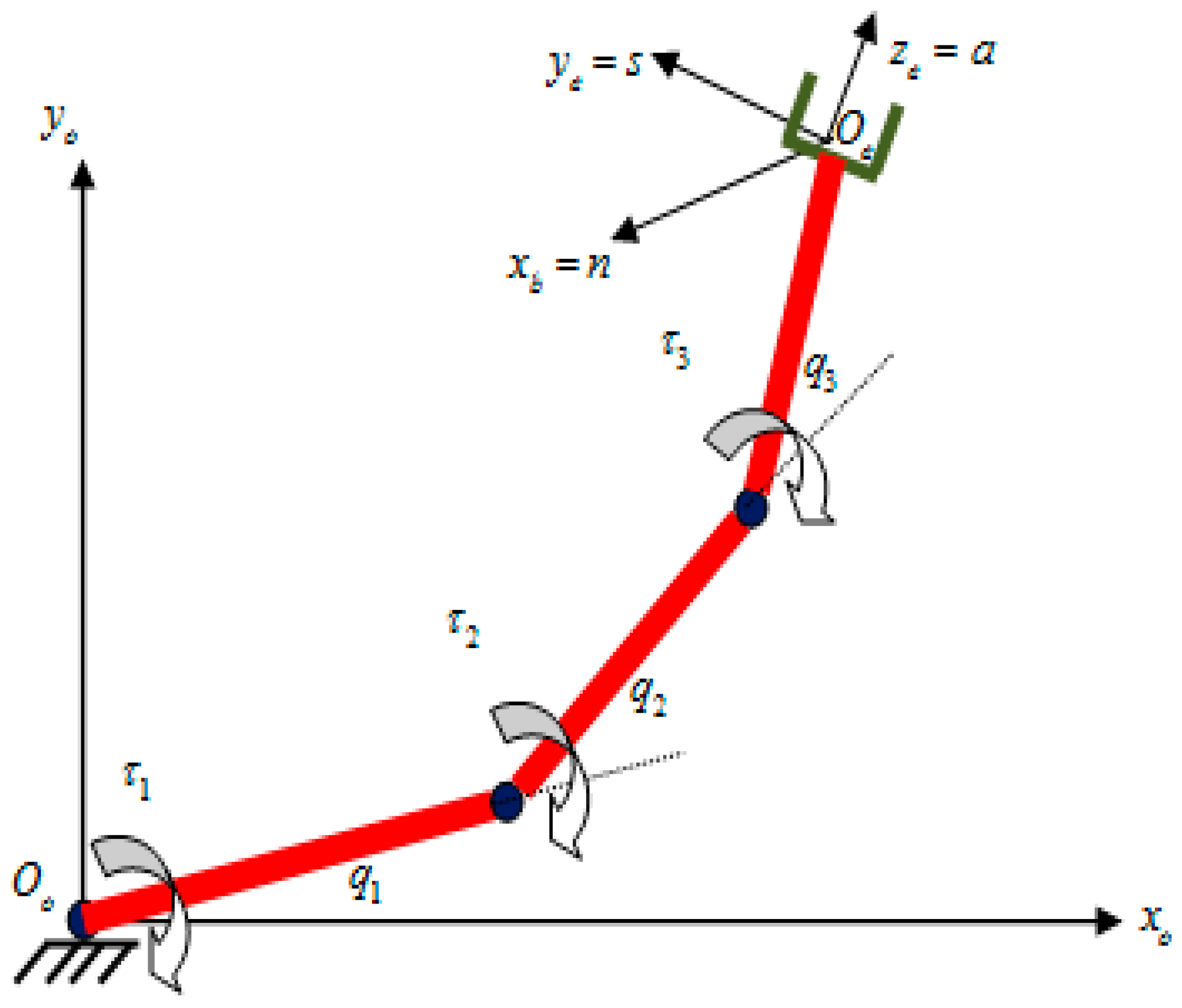 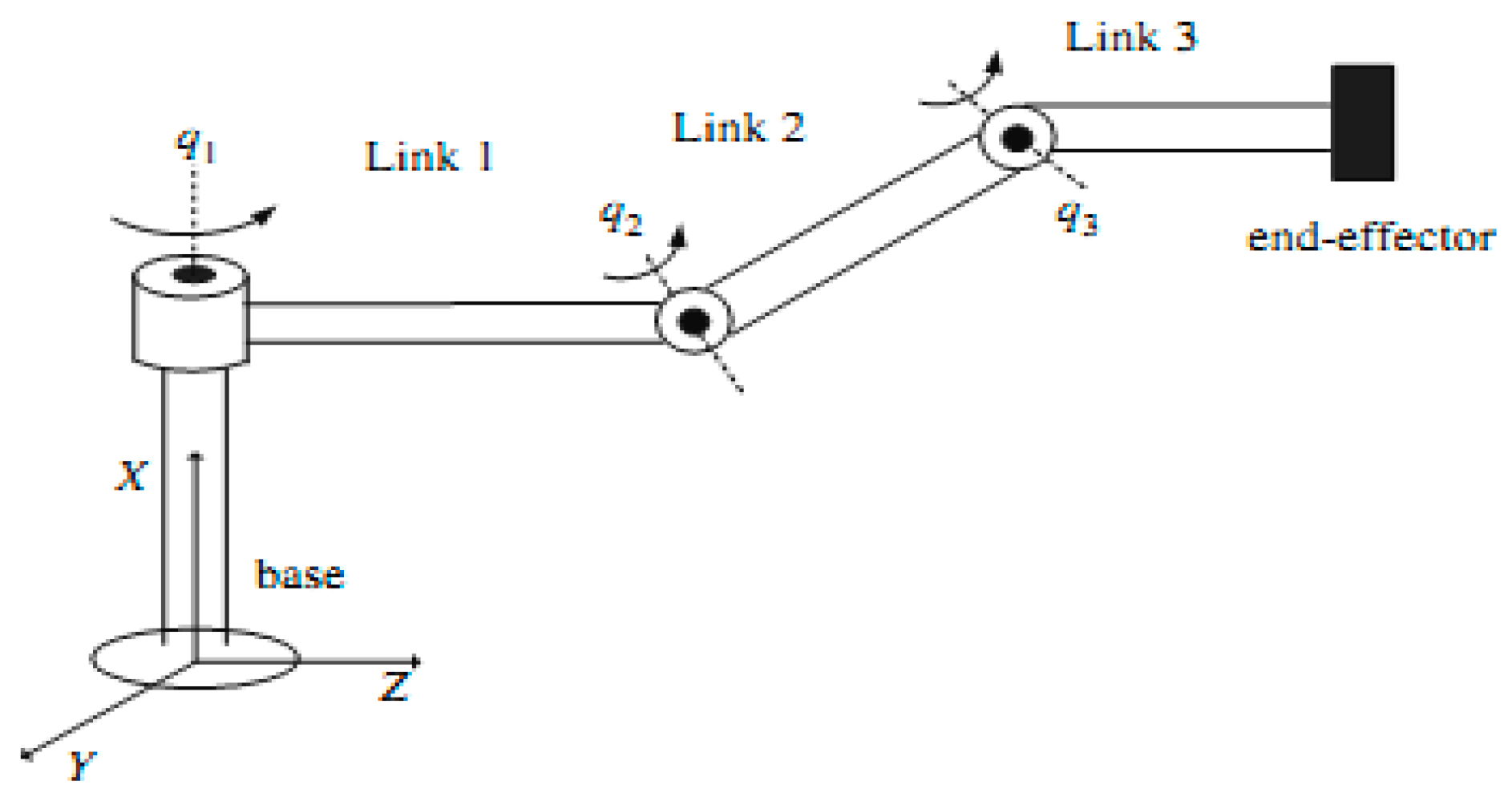 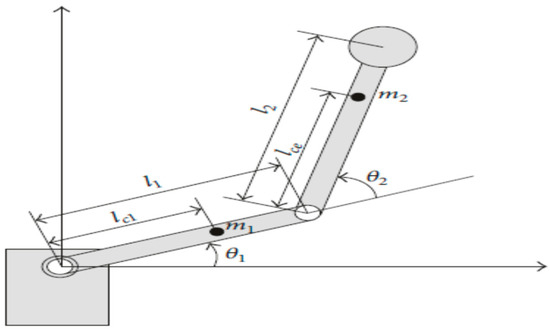 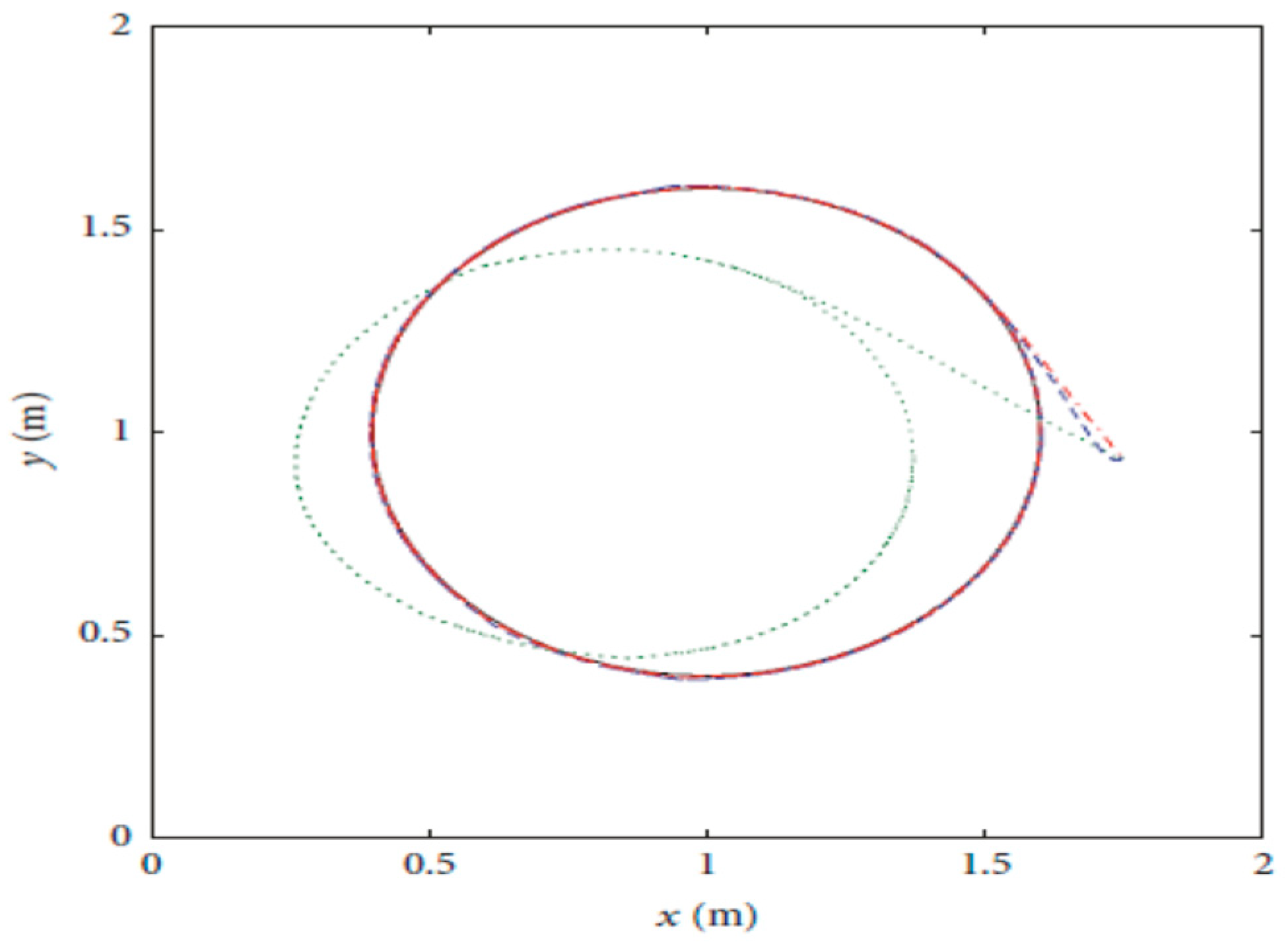 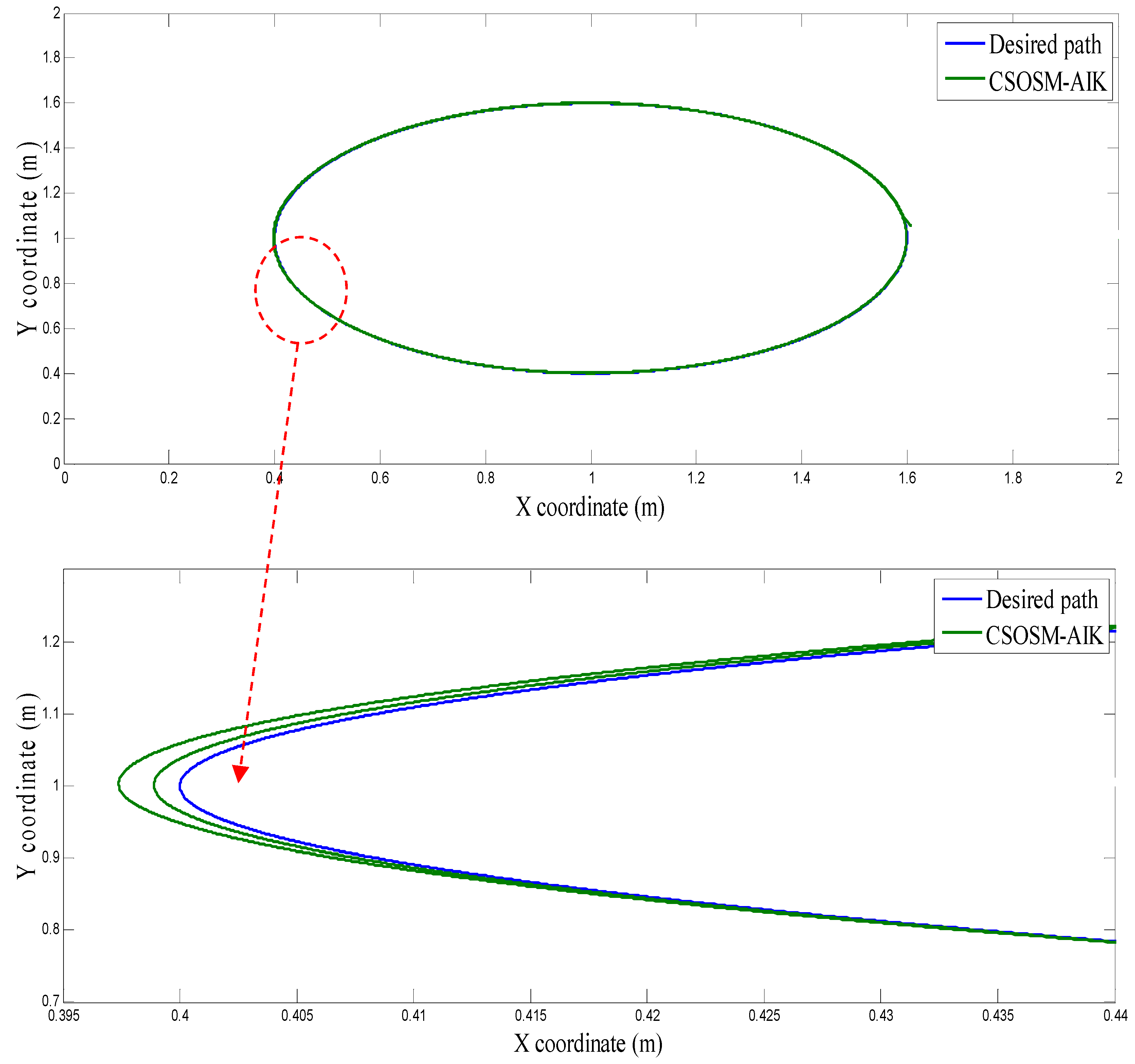