A Comparison of Robot Wrist Implementations for the iCub Humanoid †

This paper proposes a new shape memory alloy (SMA)-driven compliant rotary actuator that can perform both passive and self-actuated motions. This SMA actuator is suitable as a redundant actuation part in a parallel robot joint to assist with singularity postures where the robot might lose the ability to maintain the position and orientation of the end effector. The double helical compliant joint (DHCJ) was chosen as a candidate mechanism; it can act in soft compliance with linear characteristics and a wide range of motion. The experimental results validated that the proposed model can be used to simulate the DHCJ behavior. The use of this mechanism exhibits advantages such as one-axis rotational motion, linear behavior even for a compliant mechanism, stiffness in the other axes of motion, and compact size. SMA leaves (strips) were used as actuation parts, and a single SMA leaf was tested before combining with the double helical frame as an SMA actuator. The prototype was fabricated, and necessary parameters such as deflection angle, temperature, torque, and stress–strain were collected to define the model for a controller. This actuator is controlled by a feedforward controller and provides rotational motion for both forward and reverse sides with a maximal range of 40 degrees. View Full-Text
Keywords: shape memory alloy; compliant mechanism; SMA actuator shape memory alloy; compliant mechanism; SMA actuator
►▼ Show Figures 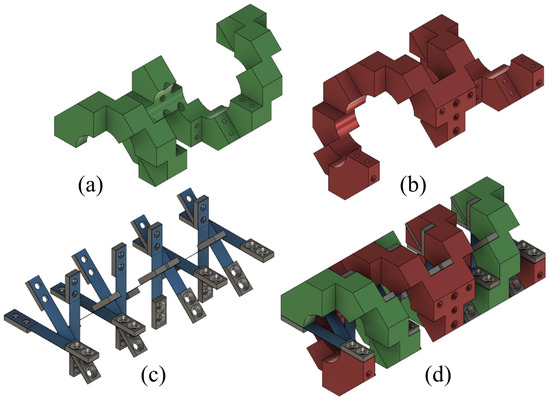