How? Why? What? Where? When? Who? Grounding Ontology in the Actions of a Situated Social Agent
Previous Article in Journal

This article presents: (i) a formal, generic model for active sensing tasks; (ii) the insight that active sensing actions can very often be searched on less than six-dimensional configuration spaces (bringing an exponential reduction in the computational costs involved in the search); (iii) an algorithm for selecting actions explicitly trading off information gain, execution time and computational cost; and (iv) experimental results of touch-based localization in an industrial setting. Generalizing from prior work, the formal model represents an active sensing task by six primitives: configuration space, information space, object model, action space, inference scheme and action-selection scheme; prior work applications conform to the model as illustrated by four concrete examples. On top of the mentioned primitives, the task graph is then introduced as the relationship to represent an active sensing task as a sequence of low-complexity actions defined over different configuration spaces of the object. The presented act-reason algorithm is an action selection scheme to maximize the expected information gain of each action, explicitly constraining the time allocated to compute and execute the actions. The experimental contributions include localization of objects with: (1) a force-controlled robot equipped with a spherical touch probe; (2) a geometric complexity of the to-be-localized objects up to industrial relevance; (3) an initial uncertainty of (0.4 m, 0.4 m, 2Π); and (4) a configuration of act-reason to constrain the allocated time to compute and execute the next action as a function of the current uncertainty. Localization is accomplished when the probability mass within a 5-mm tolerance reaches a specified threshold of 80%. Four objects are localized with final {mean; standard-deviation} error spanning from {0.0043 m; 0.0034 m} to {0.0073 m; 0.0048 m}. View Full-Text
Keywords: active sensing; localization; tactile sensors; information gain; entropy; decision making; reasoning active sensing; localization; tactile sensors; information gain; entropy; decision making; reasoning
►▼ Show Figures 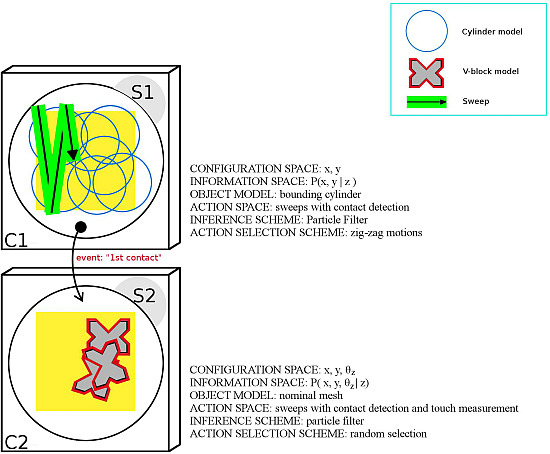